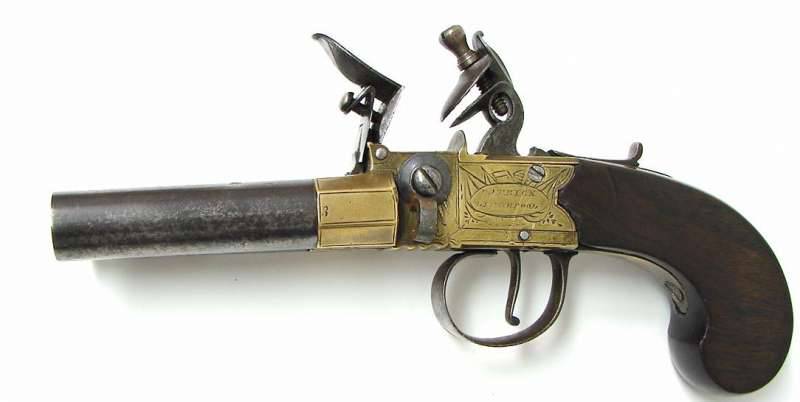 Today we want to present you double-barreled flint pistols with a boxlock lock.

The article will consider two types of pistols: with horizontal and vertical barrels.

The first pistol is an English double-barreled flint pistol with a horizontal arrangement of barrels and a dagger fixed on the right barrel. The gun consists of a brass frame, steel trigger guard, wooden handle and a pair of steel trunks. In the frame of the pistol is installed a conventional flintlock boxlock, trigger and safety mechanisms. The total length of the gun 197 mm.

63,5 mm pistol barrels are made of steel. Channels trunks rifled. The rifling bore at the muzzle is formed in the cross section of an asterisk with eight rays. Visually, it seems that the cuts are so deep that they almost cut through the trunk. 0.50 barrel bore caliber.

At the top of the frame, behind the trigger is located the safety lever. When moving the lever forward, it blocks the trigger and does not allow it to leave the combat or safety platoon.

A short dagger or triangular stylet is soldered to the lateral surface of the right trunk. Barrels are twisted from the pistol frame for loading weapons. The presence of the blade on the right barrel forces the arrow to load the weapon first to unscrew the left barrel, then the right one, and after charging, to twist them into the frame in reverse order. 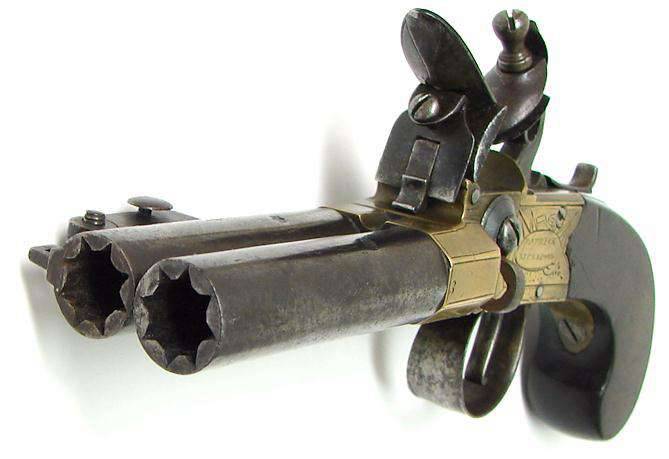 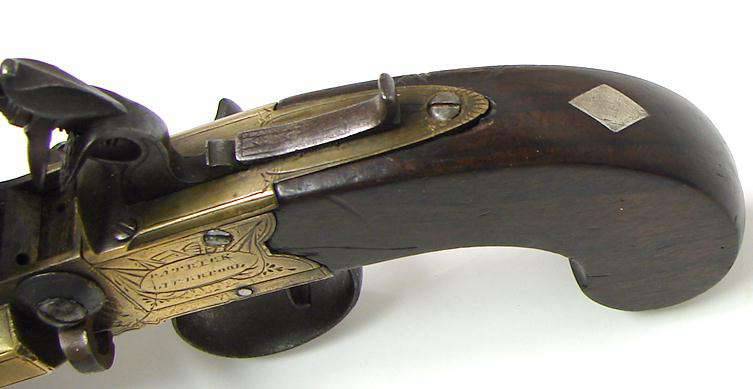 At first glance it may seem that this is just a salvo double-barreled pistol. In fact, a special crane mechanism is built into the frame of the pistol, thanks to which the shooter can alternately fire from one and then from the second barrel. The lever of the crane mechanism is located on the left side of the frame and is a bracket. When the crane turns, one of the two chambers with the gunpowder opens alternately. Each chamber is connected with only one seed hole with a left or right barrel.

On the frame of the gun marked with a digital marking. On the right side is the “4” digit, on the left side - the “3” digit. Similar figures are applied respectively on the right and left barrel. The presence of marking numbers allows the shooter not to confuse the barrels when loading and assembling weapons. A lever is placed on the right side of the frame, which probably acts as a fuse for the crane mechanism. 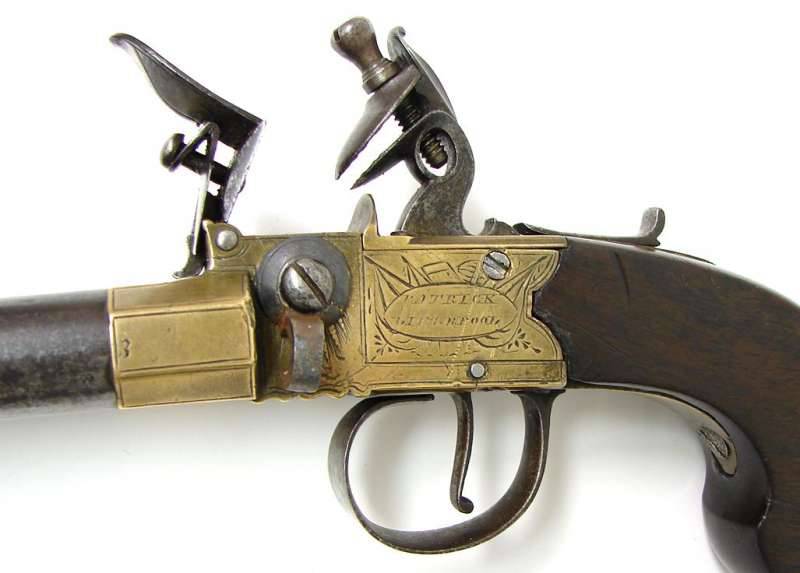 On the left side of the frame engraved, depicting banners and military paraphernalia, as well as the text marking. The marking indicates the name of the manufacturer and the city of release of the weapon: Patrick Liverpool. 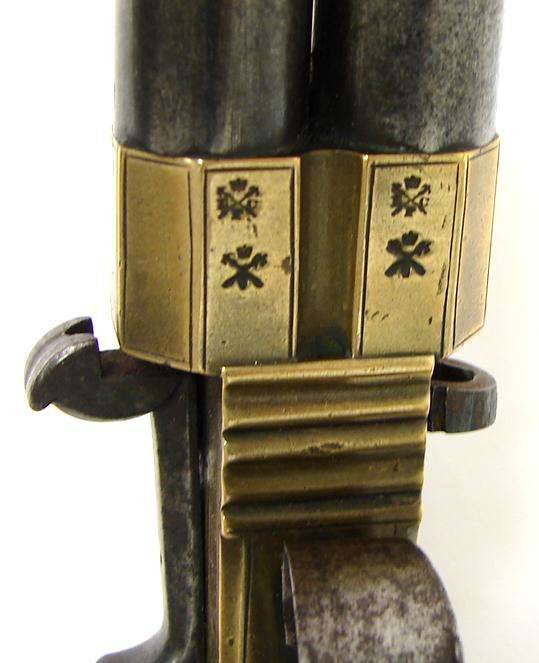 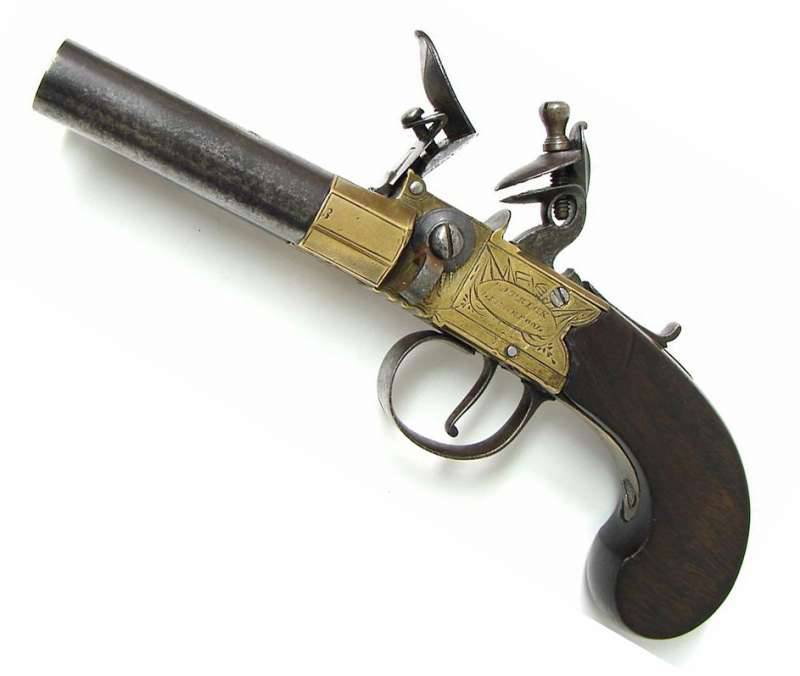 This English double-barreled flint pistol was sold at an American auction for 2850 dollars. 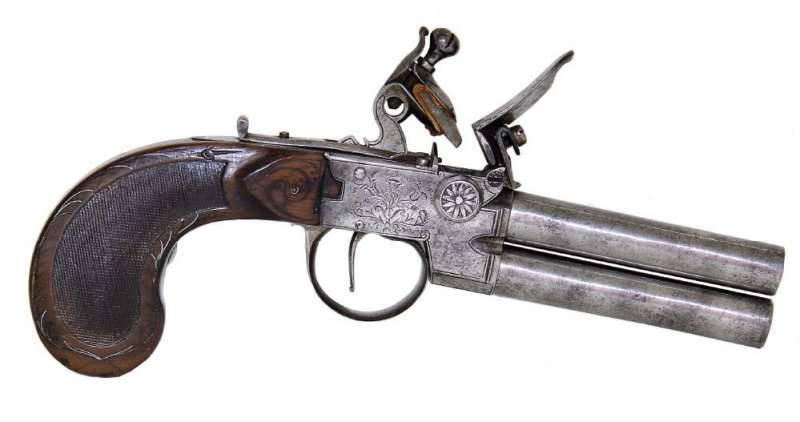 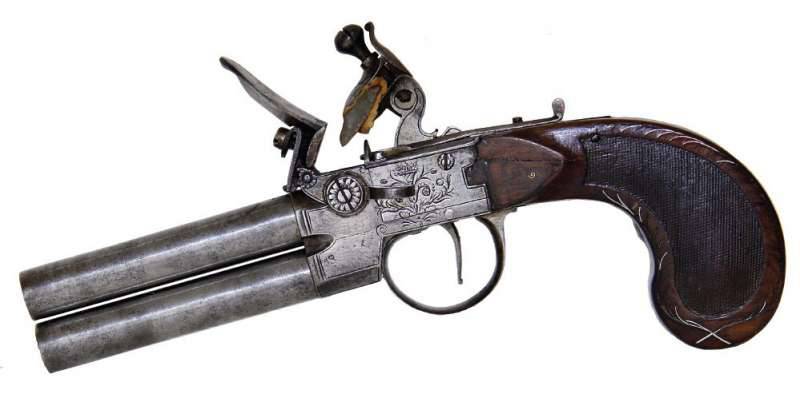 The pistol differs from the previous one only in the frame design, due to the vertical placement of the barrels, the lack of a blade and the peculiarities of the outer finish of the weapon. 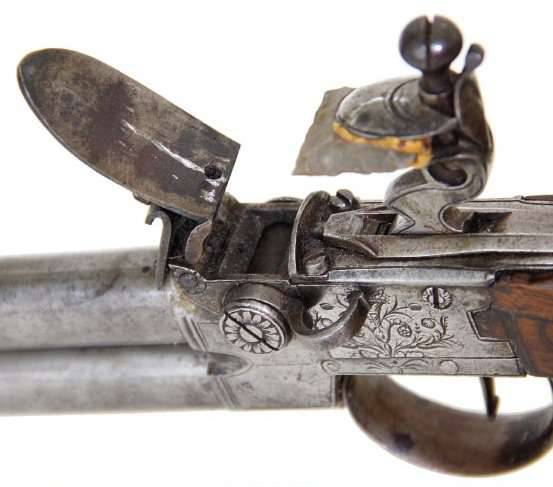 The safety mechanism of this gun when moving to the extreme forward position not only blocks the trigger, but also the powder shelf lid. The front part of the safety lever enters the hole in the lid of the powder shelf and prevents the weapon from firing. 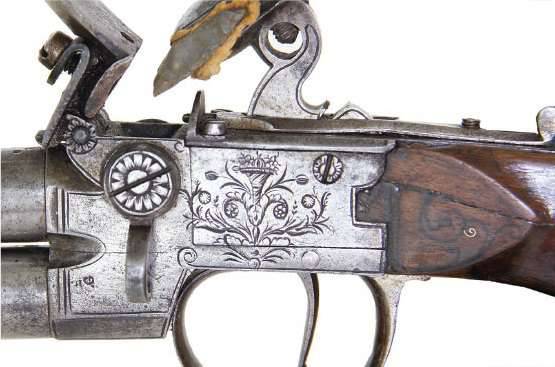 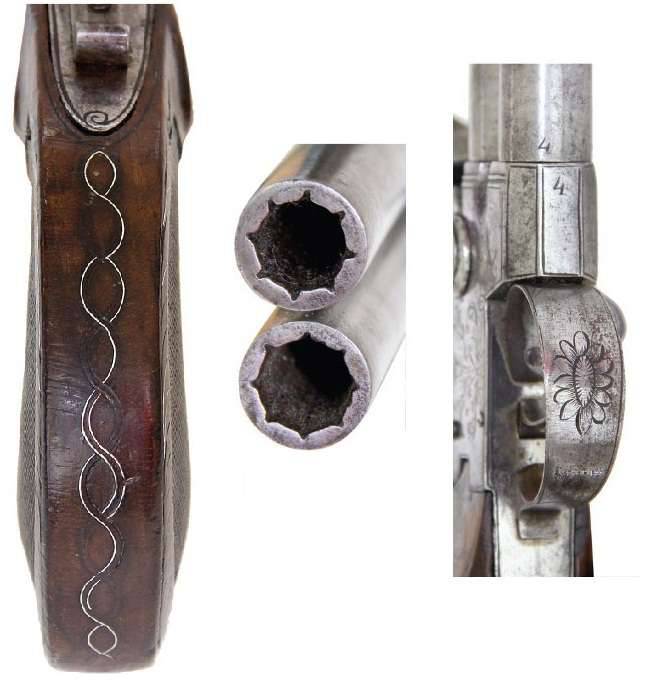 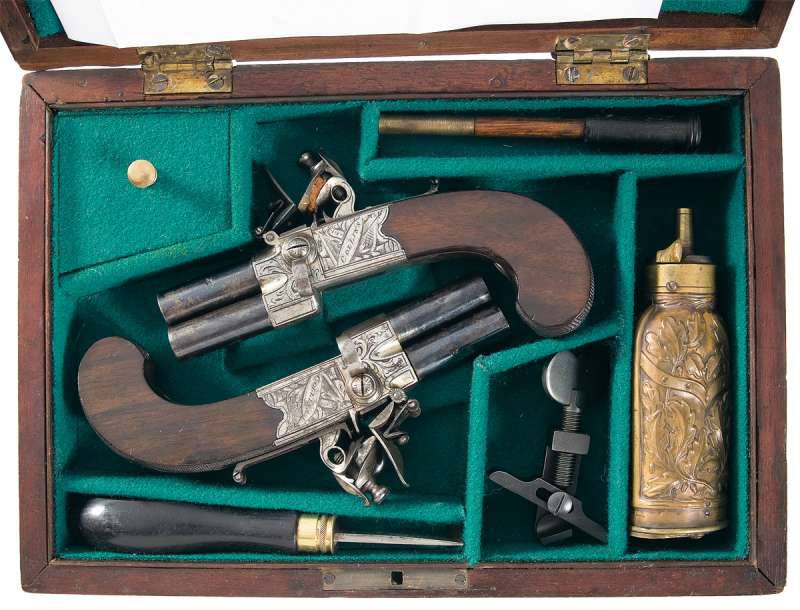 Double-barreled pistols were made by masters both in the form of single samples and in sets. Here is an example where a pair of double-barreled road pistols are placed in a weapons box trimmed inside with green cloth. In addition to the pistols in the compartments of the drawer, a screwdriver, a vise for combat springs, a ramrod and a powder flask are laid. In a closed compartment are bullets and spare flints. The original twin pistol kits represent a huge historical and collectible value.