Fresh report of the Ministry of Defense of the Russian Federation: since the beginning of February in Syria more than 700 sq. km of territory and 73 settlements

February 16 2016
39
Office of the press service and information of the Ministry of Defense of the Russian Federation is a fresh report on the actions of the Russian Aerospace Force in Syria. The report says that Russian military aircraft in Syria made 444 combat sorties and attacked 1593 targets of terrorist groups in various provinces of the SAR.


В summary The Russian Defense Ministry says that over the past few days, about 100 square meters have been freed from militants. km of territory in the north of Syria. Militants knocked out of 7 settlements in the north of the provinces of Aleppo and Latakia. In total, since the beginning of February, about 700 square meters have been freed from terrorists in Syria. km of territory and 73 settlement. 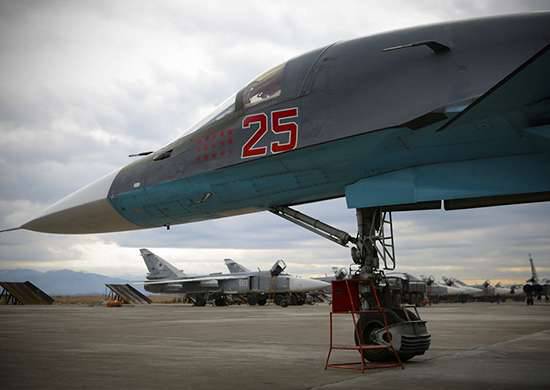 The press service of the Defense Ministry of the Russian Federation reports that a peaceful life is gradually improving in the cities and towns liberated from the militants. Humanitarian aid is being delivered to these areas.

From the message of the official representative of the Ministry of Defense of the Russian Federation Major General Konashenkov:
After reaching a framework agreement at the end of last week on the cessation of hostilities in Syria, there has been a sharp increase in terrorist groups in the south and especially in the north of the country.

Due to the complicated situation in the Aleppo area, terrorists are conducting a massive evacuation of their families to the north of the province, to the Turkish border. However, due to the tightening of the regime by the Turkish authorities, only wounded militants are allowed to pass through the border without hindrance.

At the same time, delivery to the terrorists in Idlib and Aleppo continues at the Turkish-Syrian border weapons, ammunition and reinforcements manpower.

During the briefing, General Konashenkov told that Turkish artillery continues to strike at Syrian territory. In the border areas in the province of Aleppo, at least 100 volleys of large-caliber guns were noted.

The representative of the Ministry of Defense of the Russian Federation commented on the accusations addressed to Russia in connection with the anti-terrorist operation in the SAR:

Since yesterday, there have been many accusations at our address from the leadership of Turkey, its allies and subsidiaries of well-known organizations.

Prime Minister Ahmed Davutoglu, who was on a visit to Ukraine, yesterday even agreed to deliver a blow from Russia from the Caspian Sea, we emphasize a BALLISTIAN ROCKET to a hospital in Idlib province.

As part of the Caspian flotilla there is not a single ship capable of carrying out such launches of ballistic missiles.

Moreover, during one yesterday’s report in the Western media about allegedly affected Russian aviation non-military facilities in Syria and the victims grew like a snowball. From supposedly one hospital in the morning in Idlib province, to 5 hospitals and even several schools by the end of the day. Moreover, not only in Idlib, but also in the city of Azaz, Aleppo province.

And for a special resonance about all the allegedly affected hospitals, it was first reported that they were “supported” by representatives of the organization “Doctors Without Borders”.

Then, in order to maximize the similarity with the incident of the destruction of a hospital in Afghan Kunduz by American aircraft, the words “supported” were forgotten as if by command by all Western media. And for the evening television broadcast all the allegedly bombed objects were transformed into a “Doctors Without Borders” hospital.

Until yesterday, no one in Idlib or Azaz knew about any hospitals of the organization “Doctors without Borders”, except for the Turkish authorities. No information about these institutions can be found anywhere, including the website of the Doctors Without Borders organization.

Moreover, on the same site it is quite easy to find a message about allegedly destroyed hospitals and schools in Azaz, dated February 10.

That is, this preparation was made, but not implemented on the eve of the meeting of the heads of the foreign affairs agencies of Russia and the United States in Munich, which, as we assume, is so actively opposed by Turkey.

And in the message from February 15, about the allegedly destroyed hospital in Idlib, you will not find a single photo or video about this institution: whole or destroyed. Although “Doctors without Borders” all its activities in all countries are carefully documented in photos and videos.

According to Konashenkov, the reports about the allegedly bombed hospital “Doctors without Borders” strangely contain only basic data: “Gaziantep. Turkey".

The representative of the Ministry of Defense of the Russian Federation once again expressed that Russian pilots, unlike NATO pilots, are not engaged in the bombing of peaceful targets. According to Igor Konashenkov, all strikes by the Russian Aerospace Forces aircraft are inflicted only after repeated confirmation that the target belongs to the militants.

Ctrl Enter
Noticed oshЫbku Highlight text and press. Ctrl + Enter
We are
ARMY-2016. Cluster VCS. Part of 2. Space is space!The action “Military service under the contract is your choice!” In Rostov-on-Don: future contract servicemen, exhibitions and “Russian Knights”
39 comments
Information
Dear reader, to leave comments on the publication, you must to register.