Poland wants to repeat the 1939 disaster of the year 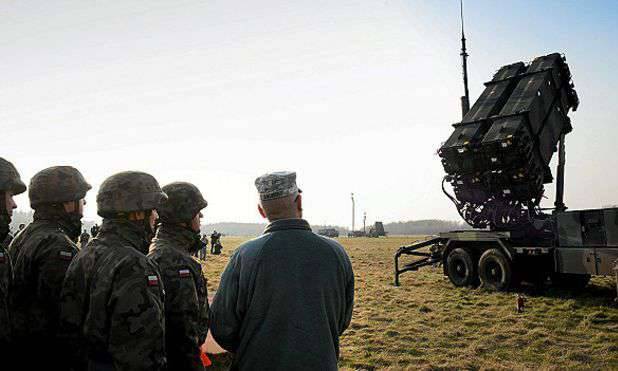 The defense ministers of NATO member countries at the February meeting of 10 approved another strengthening of the Alliance’s military presence in Eastern Europe. This decision will be embodied in the form of the creation of a new multinational unit that will be deployed on a rotational basis in Eastern European countries. The final decision on the size and composition of the contingent near the borders of Russia and Belarus will be taken at the July summit in Warsaw.

And if the regular increase in NATO forces in Europe "only" caused outrage in Moscow and the decision to create three new divisions in the western direction, the message about the deployment of the American missile defense system in Poland caused the Kremlin to be perplexed. Yevgeny Lukyanov, deputy secretary of the Russian Security Council, even warned the Poles that by placing elements of a missile defense system at risk, they put themselves in danger: "If they like being targets because of American weapons systems, it is their choice."

Such a goal after 24 in September of 2015 was the quiet and peaceful Polish village of Redzikovo, located in 150 km from Gdansk, almost 750 km from Minsk and 1300 km of Moscow. Half a year ago, the Polish parliament approved the deployment of a ground-based version of the American Aegis BMD system (an element of the missile defense system), capable of intercepting short-range and medium-range ballistic missiles, on the basis of the former military airfield in Redzikowo.

The construction of the military facility has already begun, and in the 2018 year, according to plans, American mobile batteries with Standard-3 interceptor missiles (SM-3) will be placed there, as well as a radio navigation station. Building and maintaining a base in Poland for the next 25 years will cost the US $ 20 billions of dollars.

A deal to deploy missiles to protect the Alliance countries, allegedly from the potential threat of a ballistic strike from Iran and North Korea, was signed between Poland and NATO back in 2010. However, the leading European and Polish media do not tell the whole truth about the Pentagon’s plans for this system. If you look at the map, it becomes clear that it is being organized in order to limit the nuclear potential of Russia, and in the future, perhaps of China. Agree, the claims that Korea and Iran will send their missiles to the United States through Poland are naive and ridiculous. Indeed, in this case, the same Iranian missiles would have to turn from the optimal trajectory towards Eastern Europe and fly extra 2500 kilometers. It is logical that it would be better to intercept them over the territory of Turkey or southern Italy.

Meanwhile, recently the world media more and more loudly report on the defiant actions of Russia. Say, it is not the first year that it has been developing offensive forces in the Kaliningrad region and is building up the potential of its armed forces and its ally Belarus, and this poses a threat to Poland and the Baltic countries. However, this is already a consequence, not a reason, which lies in the expansion of NATO to the East and the increased presence of American troops near the borders of the Union State.

Obviously, Russia and Belarus are responding to increased threats from Poland and the Baltic countries. Russian President Putin has repeatedly pointed out that such a state of affairs is unacceptable, and an agreement on the non-deployment of NATO forces near the borders with Russia is necessary. Otherwise, Moscow will begin to strengthen the troop grouping in the west of the country. And the position of Warsaw will significantly deteriorate if the Kremlin implements the promises related to the creation of the mentioned divisions. In addition, the Polish side should take into account that by September of this year, the domestic MLRS Polonaise, which is capable of hitting targets at distances over 200 km, as well as the possible deployment of Minsk in the country by the Russian Iskander, will be adopted by the missile forces and artillery of Belarus. and the ground version of the Kyrgyz Republic "Caliber", which have already proved to the world their effectiveness.

Poland, in turn, instead of concluding mutually beneficial peace treaties, is increasingly falling into a rage. Surprisingly, it seems that the Poles have for the second time lately lost their self-preservation instinct, without fear that, thanks to their policy, Russian missiles will soon be sent to Pomerania. Unfortunately, the Polish ruling elites do not seem to realize that, acting in favor of American rather than national interests, they can lead the country to tragedy.

Consent to deploying a missile defense system could bring even more catastrophe to Poland than happened in 1939. In the case of a modern war, Warsaw is not threatened by the occupation or loss of independence, but by the actual destruction of the country.

This is not traditional intimidation: if the military-political leadership of the neighboring country forgot the lessons of the Second World War, then the Russians and Belarusians remember the price they got for freedom.

In addition to the military threat, the US missile defense base will also block part of the investments in this area: in the immediate vicinity it will not be possible to build either tall buildings or wind stations. In addition, the construction of large civilian objects, such as large shopping centers or warehouses, must be coordinated with the American side, and already this year air traffic restrictions will take effect over the territory of the future base.

One of the ways out of the current situation for creating a real European missile defense system could be a joint project of the United States, the North Atlantic Treaty Organization and Russia, as well as the rejection of the militarization of the region. However, at the moment the question lies purely on the political plane, and where there is a clash between the geostrategic interests of the ruling elites and world powers, as well as the ambitions of past years, the opinion of ordinary people and the security of a single state does not interest anyone.

Ctrl Enter
Noticed oshЫbku Highlight text and press. Ctrl + Enter
We are
Military reform as an integral part of the security concept of the Russian Federation: Systematic dynamic assessmentNATO - Russia, Afghanistan - Ulyanovsk, further everywhere
69 comments
Information
Dear reader, to leave comments on the publication, you must to register.