February 17 2016
54
The first batch of Iranian oil, free of sanctions, went by tanker to Europe. Four million barrels are intended for companies from France, Russia and Spain. This was stated by the Deputy Minister of Petroleum of Iran, Rokneddin Javadi. In addition to tankers for Europe, Tehran sold three more oil tankers to Asia, to its traditional markets. The press reports that Iranian oil officials are ready to make small concessions on price. 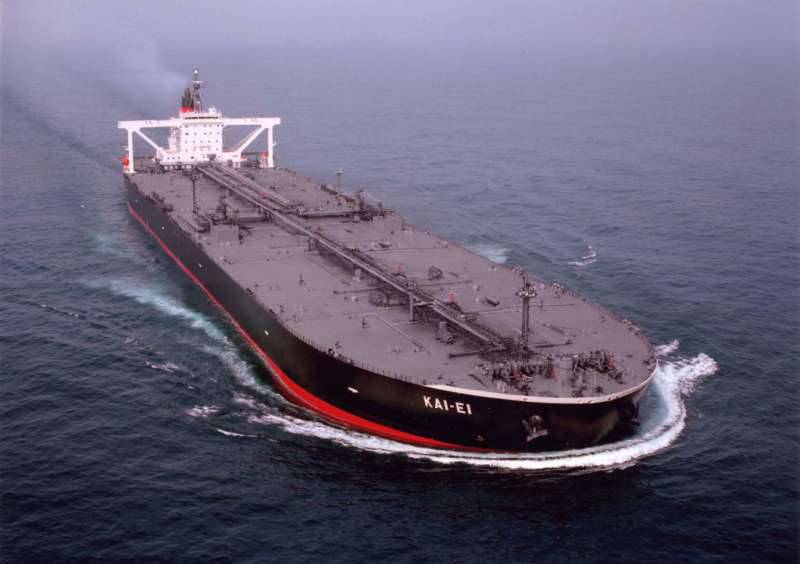 February 14 Tehran announced the first batch of oil exported to Europe after the abolition of Western sanctions. Deputy Minister of Oil, Rokneddin Javadi, told IRNA that shipment of raw materials to Europe for the first time in 5 years opened a “new chapter” in stories oil industry of Iran. Several Western tankers with 4 million barrels of Iranian oil went to the European continent, informs "Deutsche Welle".

Half of this lot was acquired by the French concern Total, the rest of the oil is meant for two companies from Russia and Spain. According to Javadi, the Russian company will send the resulting oil to its refinery in Romania. The contract with the French energy concern provides for the daily supply of 160-180 thousand barrels.

Deutsche Welle also recalls that on the same day, a Memorandum of Understanding for the expansion of cooperation in the petrochemical industry was signed by Tehran and Rome. The total amount of a preliminary agreement of intent is one billion euros.

Iran is negotiating with the German concern BASF. The latter intends to invest in Iran's petrochemical industry 4 billion euros.

In addition to oil for Europe, Iran sold three tankers of raw materials to Asia, according to "Vedomosti" with reference to Reuters.

These markets are traditional for Iran, and it is there that the Wall Street Journal points out that Tehran plans to return its share. According to the newspaper, for successful competition with suppliers from Russia and other countries, Iran has already reduced prices for refineries on the Mediterranean coast. Earlier, the same Wall Street Journal wrote that Iranian officials were willing to make small concessions on price. They try not to settle for big discounts, but look for other ways to pay for supplies: for example, in exchange for European goods or investments in foreign refineries in order to obtain more attractive conditions in contracts for the sale of raw materials.

Loading of tankers for the supply of raw materials to Europe, indicate “Vedomosti”, began after traders from Europe and shipping companies agreed on insurance.

The publication also recalls that the prospect of resuming exports of Iranian oil over the past year has twice reduced oil quotes: in July, 2015, after Iran agreed with the “six” to stop the nuclear program, and in January, 2016, when market participants realized the close lifting of sanctions with Iran.

Recall, the United States and the European Union announced the lifting of sanctions on Iran a month ago. Including the ban on oil supplies to European countries was lifted.

At the same time, Tehran announced its raw material plans: to return to the previous volumes of supply of "black gold" to the world market - up to 2 million barrels of crude oil per day. Iranian oil officials spend approximately six months to implement this plan. Experts do not particularly believe Iranians and believe that it will take up to one and a half years to build up production: they need investors, they need new infrastructure.

While Western sanctions were in effect, Iran sold about 1 million barrels of oil per day to China, India, Turkey, Japan, South Korea, that is, Asian countries.

Before Iran’s return to the Western oil market, analysts issued a variety of forecasts. Most tended to inevitably reduce prices - to 20 and even to 10 dollars per barrel. In addition to Iran, the price will be affected by the surplus of raw materials on the market (glut), problems in the Chinese economy and OPEC’s reluctance to cut production to this day.

However, the latter is now in question.

As the Investing.com with reference to Reuters, oil prices returned to growth: the market again hopes for OPEC countries to reduce production volumes.

Last Friday, oil prices rose by more than 10% only due to hopes for a decrease in production by OPEC countries. Nigeria’s oil minister said bluntly that the cartel members were increasingly inclined to take action to support prices and that he would hold talks on this issue with colleagues from Saudi Arabia and Qatar.

RIA News" cites the statement of the Minister of Energy of the UAE. He also said that OPEC members are ready to cooperate on a possible reduction in oil production.

According to some analysts, some investors continue to hope for the reduction of production by the main suppliers of “black gold” against the background of a surplus of raw materials remaining on the market.

“As for Saudi Arabia and Iran, they are not interested in reducing right now, but at the same time they do not want prices to continue to decline, since at a price of 25 dollars per barrel they will not be able to make a profit,” MarketWatch said Gordon Kwan, Head of Commodity Market Research, Nomura Holdings.

Nevertheless, even with the likely reduction in production, there is still another deterrent to rising oil prices: China.

According to the report of the National Bureau of Statistics of China, which quotes RIA "News”, Exports of goods from China in January 2016 decreased in annual terms by 11,2%, while the forecast reduction was only by 1,8%. Imports decreased by 18,8%, and analysts had expected a decline of 3,6%.

Earlier in the press flashed surprisingly optimistic forecasts for the oil market.

For example, at the end of January, analysts of the British bank Standard Chartered predicted an increase in oil prices in the current year to 75 dollars per barrel. I wrote about it Gazeta.ru with reference to "MarketWatch".

Marios Marazeftis, chief economist at the bank, said that this conclusion was made by experts when considering the dynamics of supply and demand. Marazeftis believes that supplies may drop sharply in the second half of the year. Its current surplus is based on a surplus of only about 1 million barrels per day. Standard Chartered expects the price of a barrel of oil to rise to 70-75 dollars by the fourth quarter of the year. The forecast also takes into account the return to the Iranian market.

As for Russia, in the late evening of February 15 in the Russian media information appeared about the upcoming talks between Moscow and Riyadh on the oil issue. They will be informal and supposedly will be held in Doha (the capital of Qatar).

Bloomberg reported on the informal talks between Russian Energy Minister Alexander Novak and his Saudi colleague Ali Al-Naimi. Source of the publication, notes RBC, could not clarify what will be the main topic of conversation. It is only known that Eulochio del Pino, the representative of Venezuela, should join the meeting participants.

The agency Bloomberg did not receive confirmation of the meeting from representatives of the Ministry of Energy of Russia, or from the Ministry of Petroleum and Mineral Resources of Saudi Arabia.

It is unlikely to add on our own that Russia will begin to reduce the volume of production of "black gold". First, Western sanctions are in effect, and a reduction in supplies to the foreign market will lead to an even bigger federal budget deficit, which is already suffering because of a slowdown in the economy and cheap oil. Secondly, competing countries can take a share of the Russian market, which means even bigger problems for the budget. Thirdly, earlier Russia did not reduce at low prices, but on the contrary, increased production. The proof is open official statistics. For example, in 2009, when export prices for Russian oil fell sharply - from the average annual value of 90,68 dollars per barrel to 55,61 dollars per barrel - Russian exports of crude oil did not fall, but increased: from 243,1 mln. Tons to 247,5 million tons (data from the Federal Customs Service of Russia and Rosstat, generalized The Central Bank). Growth continued into the next year (250,7 million tons).

In general, oil exports under Putin grew quite significantly: from 144,4 mln. Tons in 2000 to 223,4 mln. Tons according to the results of 2014. Of course, Moscow does not intend to lose its market share in the global oil market. Especially in times of gently renewed Western sanctions.

The federal budget revenues from the export of mineral resources and in the form of taxes, fees and regular payments for the use of natural resources range from a small percentage of 40 to a small percentage of 50 (for different data and in different years, see, for example, here). The dependence of the budget on trade in crude oil and gas is great, and it would be naive to deny this.

A. V. Rogov in the article “The dependence of Russian budget revenues on oil and gas sector exports” in the journal "Young Scientist" cites the following data: the federal budget for 2013, which amounted to 13020 billion rubles, consisted of 5357 billion rubles (or 41%) of the revenues obtained from the sale of mineral resources. If we consider the entire budget of the Russian Federation, that is, taking into account the federal and consolidated budget, then the share of revenues from the oil and gas sector in it will be 25,35%, the analyst continues. With a simple calculation, it becomes clear: at least every fourth ruble goes to the treasury of the Russian Federation precisely because of the sale of hydrocarbons. “This situation cannot be called encouraging, and dependence on the oil and gas sector is more than felt, this is especially noticeable at the moment of a sharp change in the price of oil on the world market,” the author sums up.

At the present time, we add in conclusion, oil prices are rising. The dynamics of oil prices "Brent" is shaping up growth chart: if on February 10 the price per day was 30,92 dollars per barrel, then on February 15 it was equal to 33,98 dollars, and the next day it quickly went up. On the morning of February 16, it rose to $ 34,72 per barrel.

Thus, Iranian deliveries hardly affected the market situation and so far have not infringed Russia's raw materials interests. The world share of Iran in the oil trade is too small to significantly affect the exchange pricing.

Observed and commented on Oleg Chuvakin
- especially for topwar.ru
Ctrl Enter
Noticed oshЫbku Highlight text and press. Ctrl + Enter
We are
Who benefits from the lifting of sanctions on Iran?Iran: the fight against double standards
54 comments
Information
Dear reader, to leave comments on the publication, you must to register.