In the DPR, traditionally recalled the Donetsk-Krivoy Rog Republic 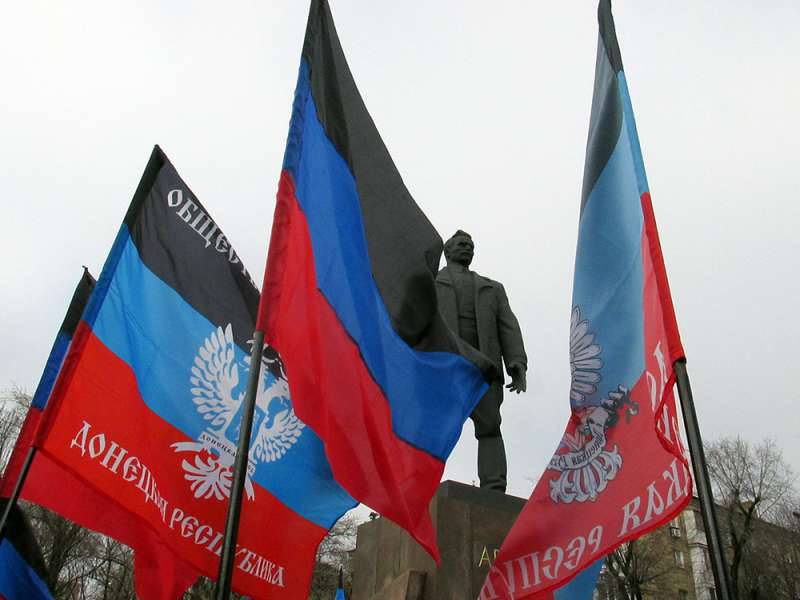 Last week, a memorable date was celebrated in the Donetsk People’s Republic, a very important for Donbass - the 98 anniversary of the creation of the Donetsk-Krivoy Rog Republic (DKR). Many active participants in the Russian Spring consider DKR to be the forerunners of the current People's Republics. The most implacable fighters against the forced Ukrainization of Donbass, long before the events of 2014, celebrated this date, brought flowers to the monument to Fyodor Sergeyev (Artem), who was the leader of the CDD.

The Donetsk-Krivoy Rog Republic was declared 12 in February (or, if we take into account the old style, 30 in January) 1918 of the year. This happened at the 4-th Congress of the Soviets of the Donetsk and Krivoy Rog Basins, which took place in Kharkov. Initially it was assumed that the DKR will become an autonomy within the RSFSR.

The flag of the Donetsk-Krivoy Rog Republic is the predecessor of the very flag under which the Donetsk People's Republic is fighting today with the Kiev junta. True, now this tricolor is upside down, but the colors remain the same. Black color means coal that is rich in the land of Donbass. Blue is the color of rivers and the Sea of ​​Azov. Red color symbolizes blood shed in battles.

The principle on which the Donetsk-Krivoy Rog Republic was created was as follows: the territories were united not on the basis of nationality, but with the aim of a closer relationship between coal and metallurgical enterprises. It was even supposed that the Republic could become an example of a socialist economy. She stretched from Kherson to the Rostov region. Its capital was originally proclaimed Kharkov. And, perhaps, the Republic would have taken place, would have entered according to the original plan in the RSFSR, and today there would not be all these bloody events ... But the war prevented it.

From the very beginning of the DKR existence thunderstorms hung over it. A few days after its proclamation, the German-Austrian troops, at the invitation of the then “independent Ukraine”, launched an offensive on the territory where Soviet power was established.

18 March 1918. The invaders invaded the newly created Republic. The forces were unequal, the Reds were forced to retreat. And to strengthen the defense at the All-Ukrainian Congress of Soviets, which took place on March 19, it was decided to include the DKR in the Ukrainian Soviet Republic.

In connection with the situation at the front, the capital of the DKR had to be moved to Lugansk. But already in May 1918, the entire territory of the Republic was occupied.

In November of the same year, after admitting defeat in the First World War, Austro-German troops began to liberate previously captured territories.

But this did not save the Republic. In the Soviet leadership about her there were differences. In the end, the point of view, according to which these industrial areas must be incorporated into Soviet Ukraine, triumphed. Supporters of such a decision argued that it was necessary to “dilute” the amorphous peasant masses in Ukraine by the proletariat in order to strengthen Soviet power. And in February 1919, the very concept of DKR disappeared.

But after almost a century the memory of the Donetsk-Krivoy Rog Republic is preserved. Today in the Donbass they think that it would be nice to return to the very idea. And every year on the anniversary of the proclamation of the DKR people come to the monument to its founder and lay flowers.

And the founder was none other than the famous Bolshevik revolutionary Fyodor Sergeyev, who bore the party pseudonym Artem.

The future revolutionary was born in March 1883, in the village of Glebovo, Kursk Province, in the family of a simple peasant. Then his family moved to Yekaterinoslav (now Dnepropetrovsk), graduated from a real school. He continued his studies at the Imperial Moscow Technical School (today - the famous Baumanka). There, in Moscow, I became interested in revolutionary ideas and joined the RSDLP.

After a rebellious youth organized a demonstration of students in 1902, he spent six months in prison. He was expelled from school with a "wolf ticket." That is, he could no longer study in Russia. The desire to continue to learn, however, the young man had, and he went to Paris. But already in 1903, he returned to his homeland in order to continue his revolutionary activities in the Yekaterinoslav province, as well as in Yuzovka.

The rest of his life, like the life of other revolutionaries, is a series of dangerous adventures. Agitation of workers, strikes, arrests, conspiracy, a failed uprising in Kharkov, again arrests. In 1909, he was sentenced to lifelong exile and sent to Siberia. "Artem" ran. Then fate brought him to distant Australia, where he became one of the leaders of the Association of Russian Immigrants. There he organized English language courses for immigrants, organized a Marxist circle, led trade union activities. He published the newspaper "Echo of Australia". There he also had to serve time in prison for political convictions.

After the February Revolution, which overthrew the monarchy, the revolutionary returned to his homeland. He actively pursued the idea of ​​autonomy of Donbass, until he founded the Donetsk-Krivoy Rog Republic. However, it was not destined to survive his brainchild ...

Artem’s life, as we see, was extremely rich, eventful. Unfortunately, she was short-lived. In 1921, he died during the test of the aerial wagon. Together with him, the tragic fate befell five more people, among whom are two German communists. The son of Artyom, who was taken up by Joseph Stalin, believed that the catastrophe was rigged by the Trotskyists. 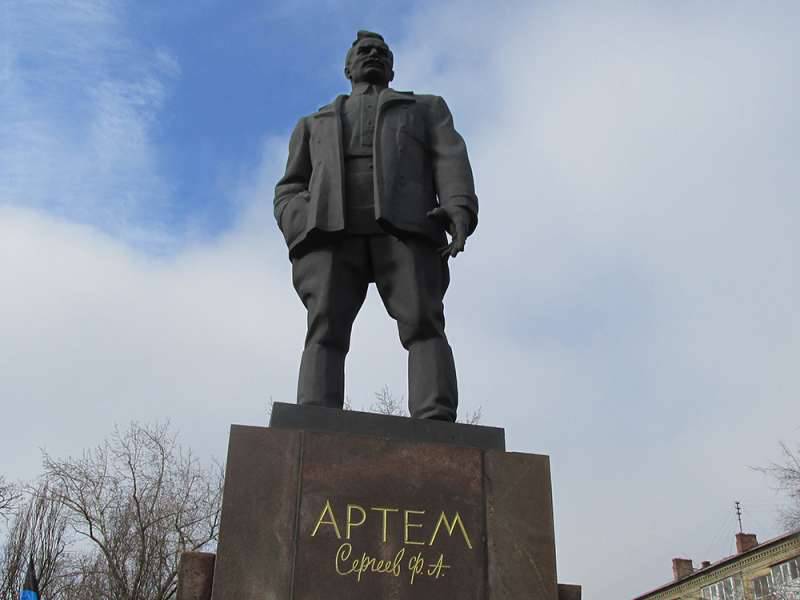 The memory of this man is especially honored in the Donbas. In Donetsk, his name (more precisely, the party callsign - Artem) is named the main street. But the city of Artyomovsk, which is named after him and where the famous Artemovskoe champagne is made, unfortunately, is currently under the occupation of Ukrohunta. The other day the occupation authorities renamed it Bakhmut. And the monument to Artem in the city was barbarously demolished.

This is not the only monument to the outstanding Soviet political figure who suffered at the hands of Ukrohunta. The monument in Slavyansk was also destroyed. In Svyatogorsk - one of the most beautiful places of Donbass, which today is also under the authority of neo-fascists - the monument is still standing. It is made by the famous sculptor I. Kavaleridze and entered into the State Register of the National Cultural Heritage of Ukraine. But this monument is now in danger.

However, in Donetsk, the sculpture of a revolutionary is treated with respect. And this year, in honor of the 98 anniversary of the founding of the Donetsk-Krivoy Rog Republic, two events took place at once.

On February 9, a group of public figures led by Andrey Purgin laid flowers at the monument to Artem. 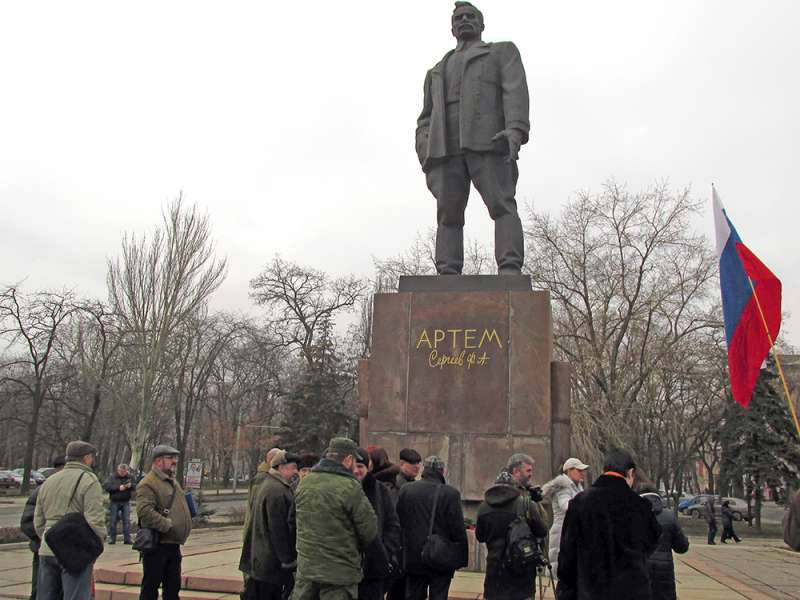 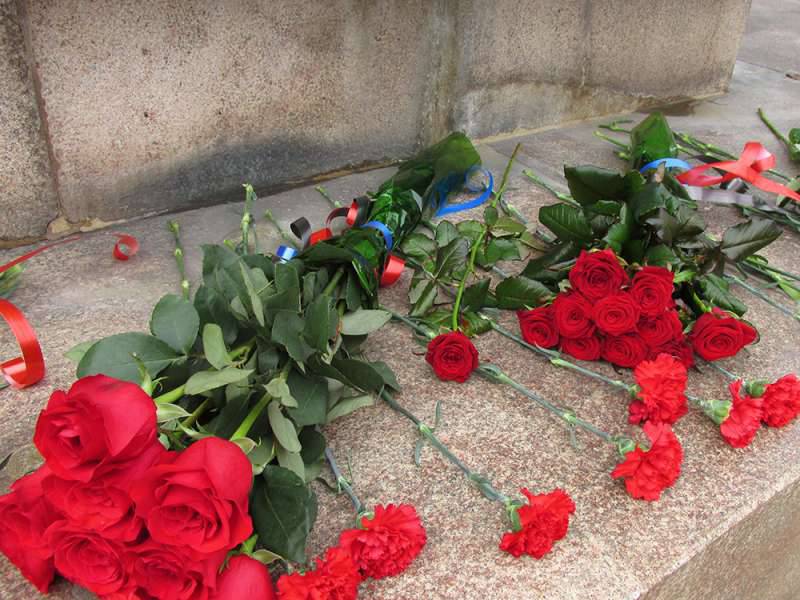 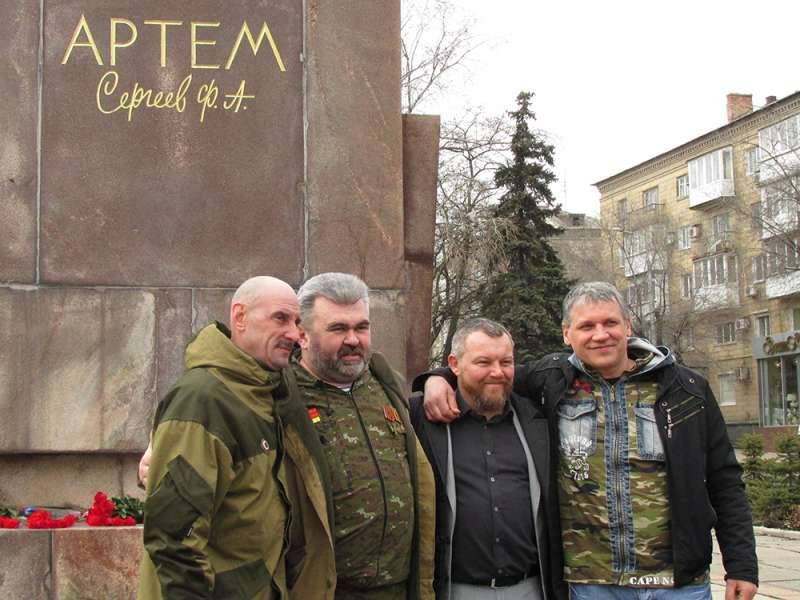 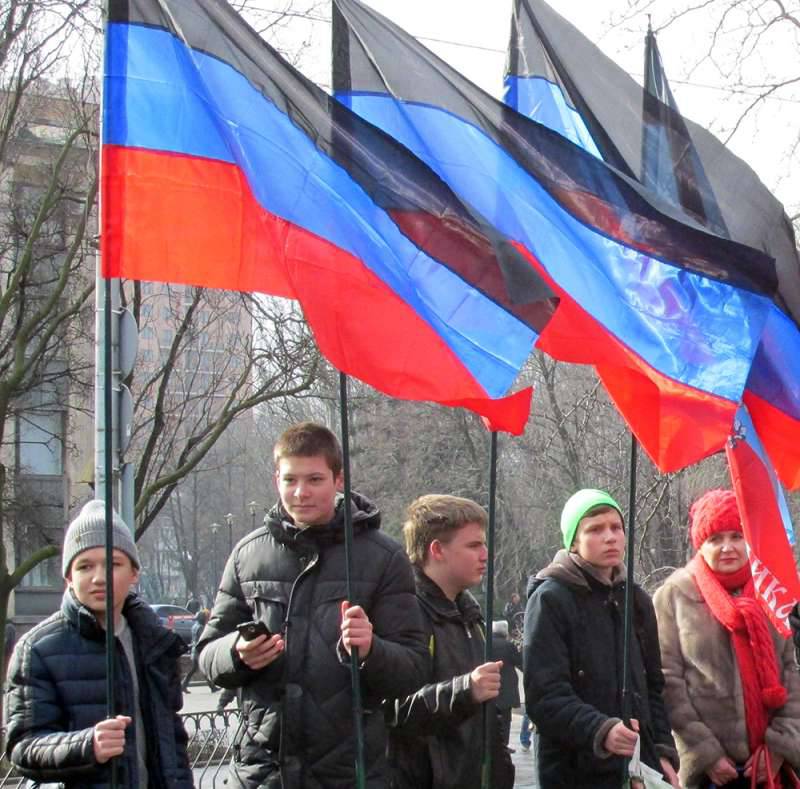 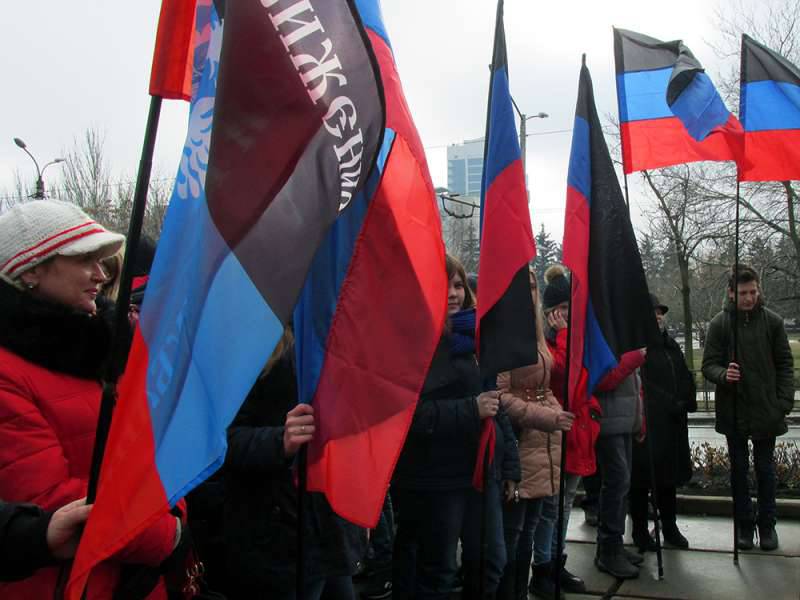 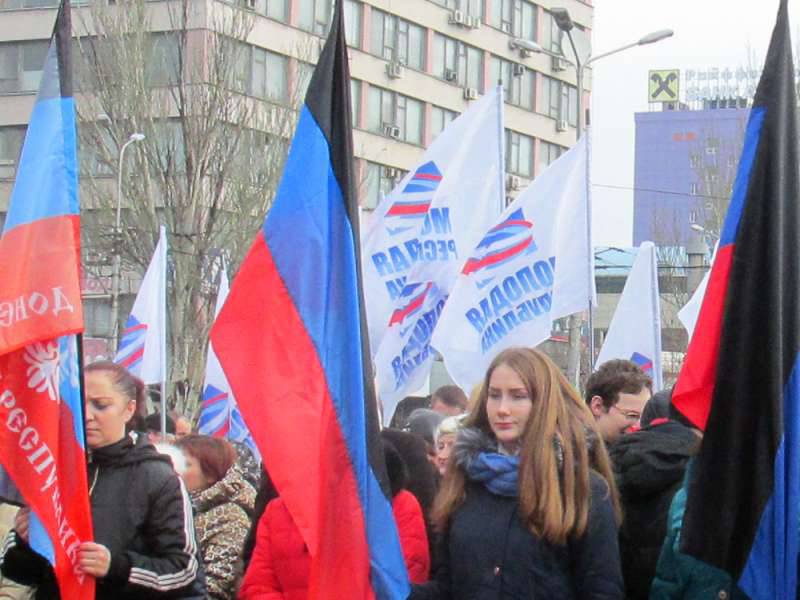 Addressing the crowd, Head of the Donetsk People's Republic, Alexander Zakharchenko, said: “Exactly 98 years ago, our ancestors tried to make this land happy. WITH weapons in their hands they defended freedom, equality and justice. In 2014, we did the same thing. We are defending our country with arms and we want to make it happy ... We are building a new history, we are already - a new story. " 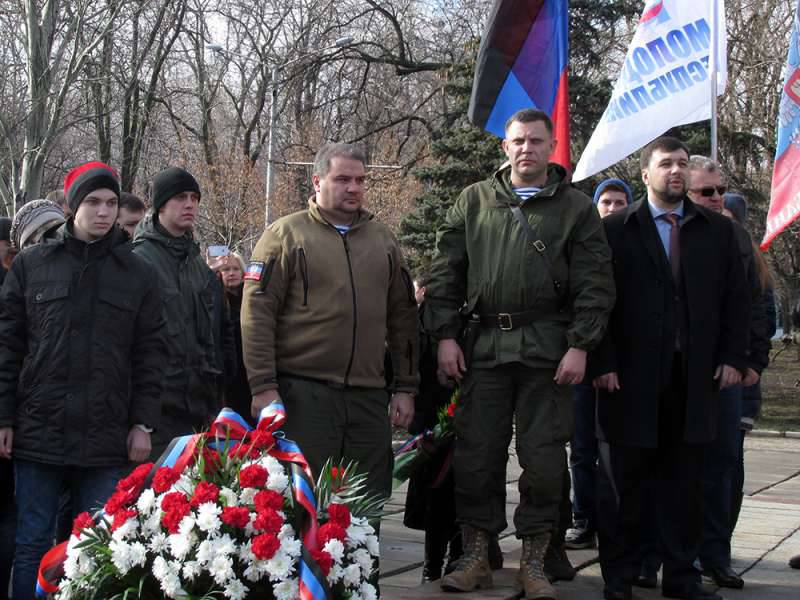 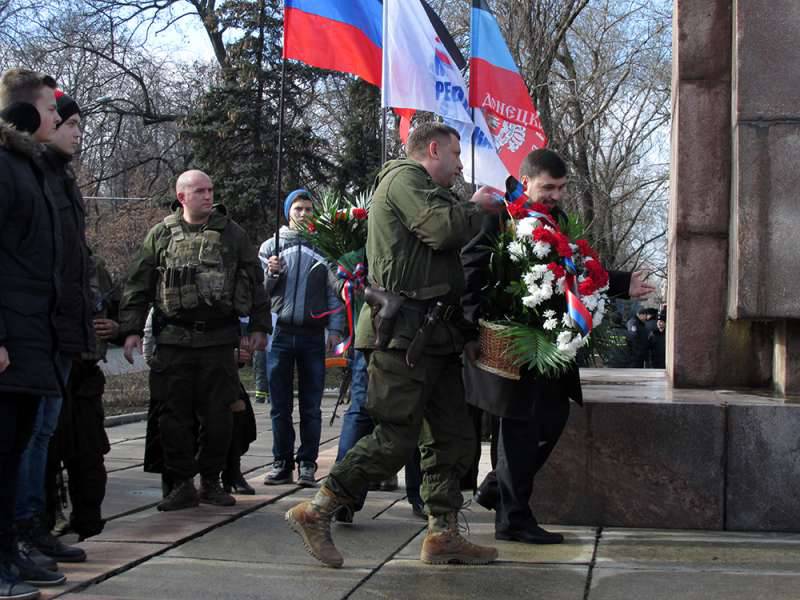 Last week, the DPR remembered another important date related to Soviet history. This time - from the late Soviet.

15 February 1989 was the year of the withdrawal of USSR troops from Afghanistan. I will not now give any assessment of the Afghan war, only one thing is clear - those who fought there, performed their international duty with honor. And many were forced to leave the Democratic Republic of Afghanistan with tears in their eyes - it was so painful to leave the ground, where comrades died, and did not finish the work for which all these battles were fought, all this blood, all these fights.

There are many “Afghans” living in Donetsk. In the Leninsky Komsomol Park is a monument to soldiers-internationalists. On Saturday, February 13, veterans of Afghanistan came to him with scarlet carnations. The Head of the DPR Alexander Zakharchenko also came.

“Thank you for teaching us to love the Motherland. They taught friendship, loyalty to duty, courage ... Let the Americans and the Anglo-Saxons shout that the war was wrong, aggressive. You have fulfilled your duty, ”he said, turning to the fighters who had passed through the Afghan flames.

There was also a guest from Russia - Deputy Chairman of the Russian Union of Afghan Veterans, Vladimir Koshelev. He awarded several soldiers on behalf of the Union, and also presented a medal to the Head of the DPR. However, Alexander Zakharchenko said that he could not accept it, and handed it over to one of his associates who fought in Afghanistan.

Tatyana Grishina, the widow of the DPR Hero Oleg Grishin, who fell in 2014 during the battles at Saur-Grave, spoke about her husband, who fought at one time on Afghan soil. (Let me remind you - I wrote about Oleg, when in his honor in Donetsk installed a memorial plaque). 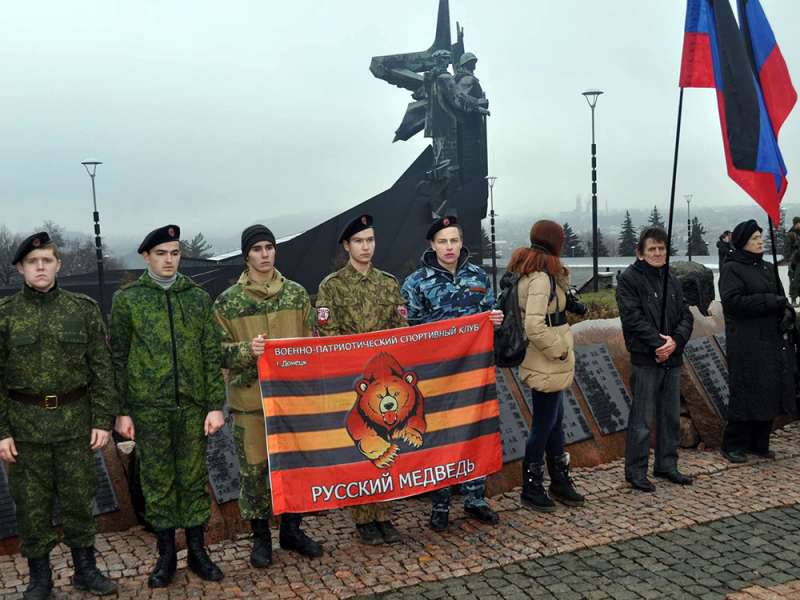 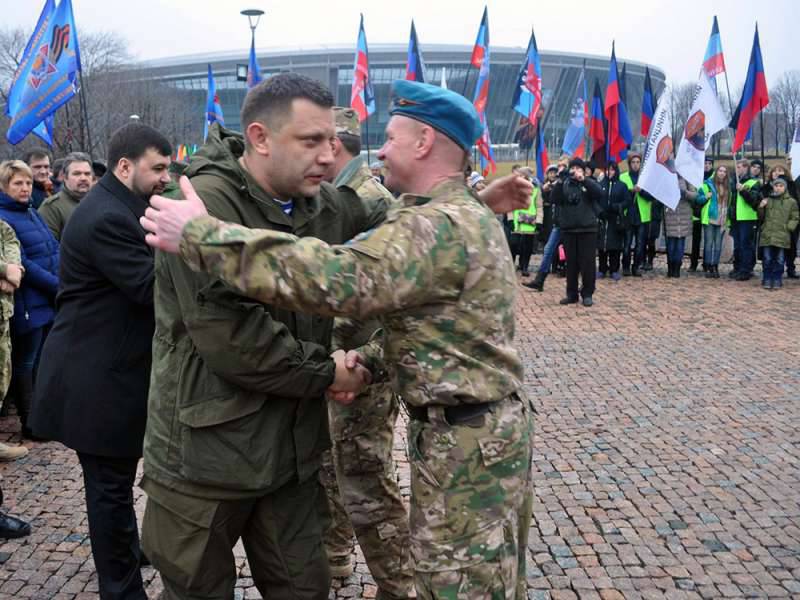 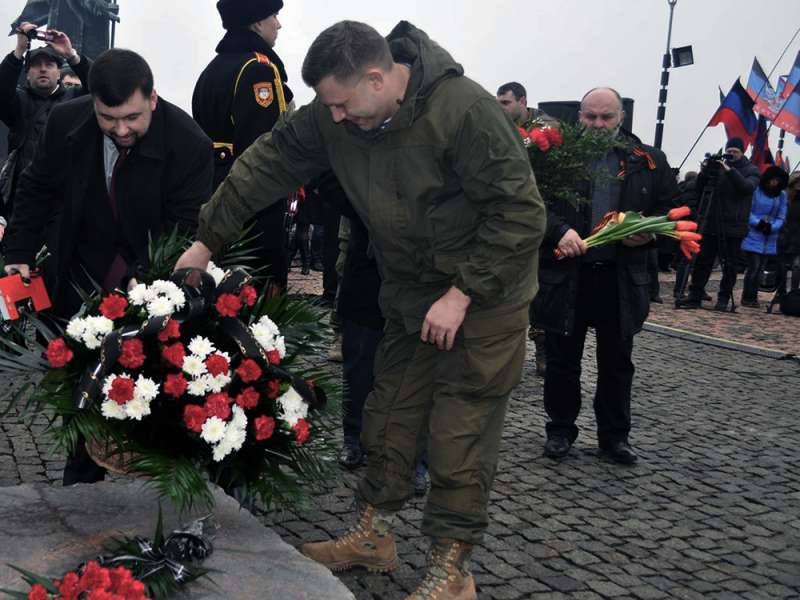 As we see, in the DPR honor and history, and exploits, and noble ideas. They read everything that the illegal power of Ukraine is crushing today.

And one more proof of this is the monument to VI Lenin restored in the shortest time after the explosion on the square named after him in Donetsk. Caring citizens bring fresh flowers to it. Performers sabotage detained by law enforcement. 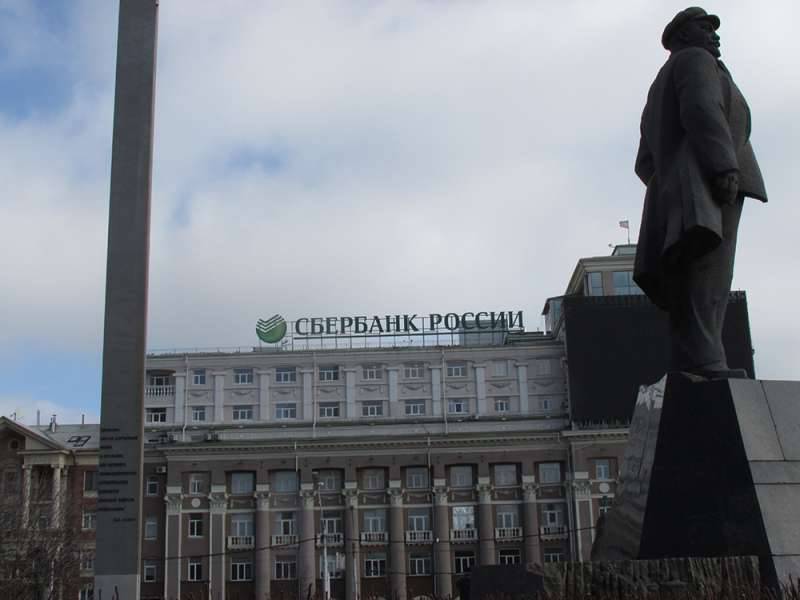 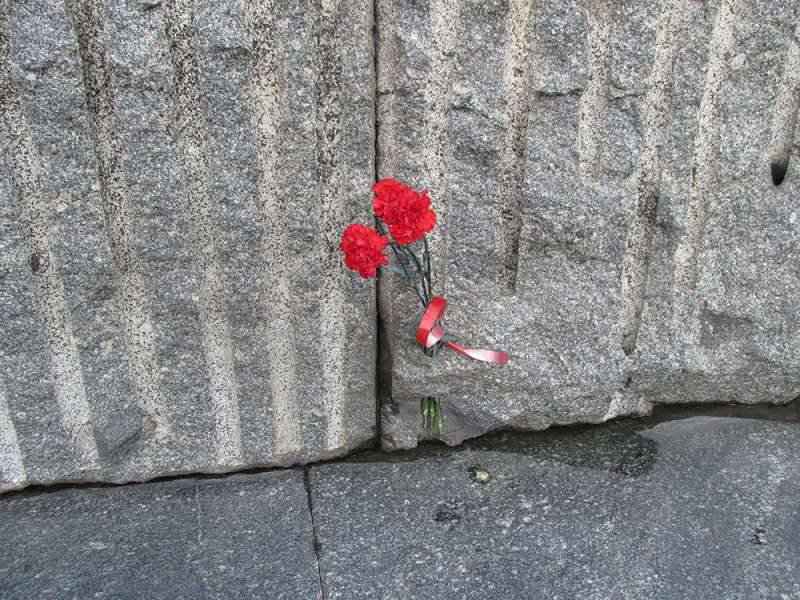 Ctrl Enter
Noticed a mistake Highlight text and press. Ctrl + Enter
We are
Day of the national flag of the DPRThe head of the DPR visited Gorlovka, the cadets took the oath, and in the "Olympic" hosted the forum "Donetsk Republic"
25 comments
Information
Dear reader, to leave comments on the publication, you must to register.