Clever believe in the word, and fools?

February 16 2016
120
The fact that Erdogan will be forced to do something is clear to everyone. Too many statements. Too much at stake. Even relations with Russia and the USA. And time. Time trouble caused by the successful actions of the Syrian army. 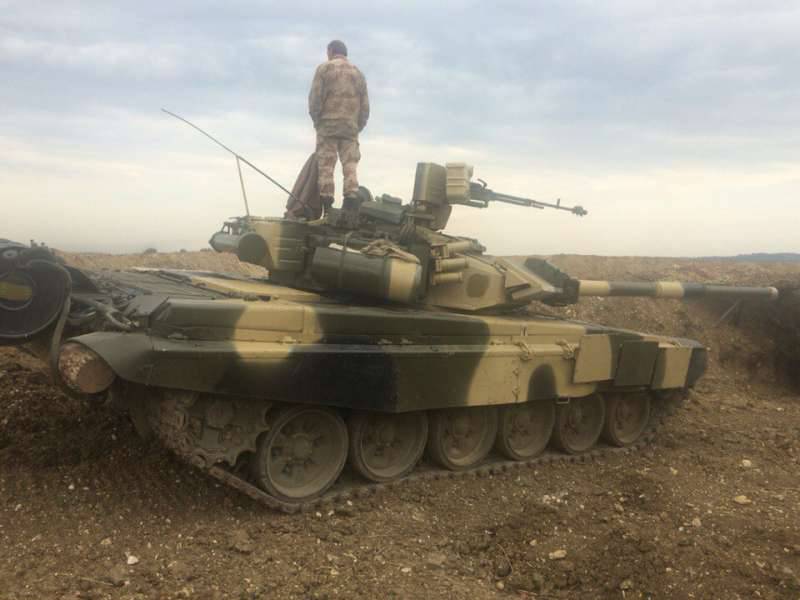 Looking through the Western press, you unwittingly catch yourself thinking that something really broke in the minds of people. In most publications on the Syrian theme, Russia has long been fighting in Syria. It is the Russian units that destroy the "poor rebels".

And in the proof of the appearance of Russian T-90А on the side of Assad. For most, this is a revelation. But for a person who is interested, it’s perfect nonsense.

For the first time they talked about the T-90 back in November last year. They started talking about training crews for these vehicles at Russian training grounds. About the transfer tanks directly to Assad’s army. There was no particular secrecy in this.

Yes, the T-90A are supplied by the Syrian army. And not new tanks were delivered, but those who had already been in the army. Judging by the color - in the Russian army. And why was Russia forced to go for it? The answer at the very beginning of the operation was given by our president. The goal - the destruction of terrorists. Without reservations.

The Syrian army used Soviet T-55 and T-72 tanks. These "old men" quite coped with the tasks. Reliable, maintainable, fairly secure. But. As always happens, bandits from somewhere (let's pretend we don’t know) "got" TOW anti-tank systems and portable grenade launchers. And the "got", according to those who are supposed to know it, to 9000 pieces. It is clear that 55-e and 72-e old modifications can not effectively resist such complexes. In the Syrian army increased losses.

Why the newest (adopted by the Russian army in 2004) T-90? Why not upgraded T-72B3? Alas, even the upgraded T-72 is inferior to 90 in almost all parameters. Starting from booking and ending with security systems.

I will simply list for those interested what 72 is missing. First of all, "Blind-1". Great invention of our designers. The system allows you to neutralize all these TOW and other American TCP. Moreover, it is effective even against NATO cannon shells.

Next - the system "Ainet". A unique system that allows the explosion of the projectile in the air. And this is especially important when destroying strong points and fortified areas. One shell allows you to completely "demolish" the enemy machine-gun nest in the literal sense of the word.

In general, the participation of T-90 in the fighting is necessary for us. This is the first combat use of this tank. And already identified significant shortcomings in the protection system. Work to eliminate them has already begun.

And the days of the old T-72, with all modifications, alas, are numbered. Russia can not afford to continue to use the machine, which in its characteristics is inferior even to Korean or Chinese tanks. Even the Polish "Leopard-2A5" is better in terms of characteristics.

In the same way, when terrorists searched for the body of a dead pilot, no one hid that there were instructors from Turkey in their ranks. And the body somehow turned out to be unclear there. In some areas, there are American specialists. There are Iranians, Saudis, Iraqis, even (rumors are not confirmed, but they are roaming) Israelis. So what's the deal?

But the fact is that yesterday, at the request of the Syrian Foreign Ministry, the Turks invaded Syria. Time selected successfully. Weekends. For some reason, most provocateurs live in the minds of the belief that the weekend is for everyone. Including for the military. In principle, this is true, but not for those who serve.

So, the 12 jeeps crossed the Syrian border yesterday. According to intelligence, about 100 man of personnel. The rest is covered with a veil of secrecy.

Usually on armored jeeps with machine-guns on the roof, they move the DRGs or mercenaries. But the number of cars shows that it was the military unit that entered. It seems to me that the specialists of the Turkish army are working. And the task is to “work out” the rear of the Syrian army. Along the way, small groups will be landed in various areas, and the vehicles themselves will be used to reinforce any of the gangs of terrorists. And this speaks already of the real invasion of the Turkish army into Syria.

There is another nuance of Sunday events. Many have heard about the shelling of the Kurdish positions in Syria from Turkey. But there was one more. Much more serious. For the first time yesterday there was an artillery duel. In response to the shelling of positions, Syrian artillery bombarded the Turkish. Those. fighting is already openly conducted between the Syrian and Turkish armies.

I will not talk about who will win this war and who will lose. To tear a vest is, of course, beautiful. But could someone with an 100 percent guarantee say in 41 that we win? It is doubtful. But there was faith. Belief in victory. And the desire to win.

The Syrians have exactly the same faith and desire today. And this faith is supported by the support of the army by the people. And Russia today is not the last country.

Monday will show where the end point of jeeps. It seems to me that today this column will be indicated by the Russian Su-25 to this column. If an intelligent person understands simple human words, then the fool needs to reinforce these words with a crack. The word plus clout is taught even completely frostbitten and irresponsible.

Ctrl Enter
Noticed oshЫbku Highlight text and press. Ctrl + Enter
We are
Results of the week. “Are you the smartest here?” Did anyone tell you this, or did you decide? ”Syria: Americans scare themselves, and Asma Asad buys chairs
120 comments
Information
Dear reader, to leave comments on the publication, you must to register.