February 16 2016
44
Currently, in order to develop the fleet of automotive and special equipment of the armed forces, several new projects are being developed. The most important element of the new program is the Tornado projects, in which promising wheeled chassis with high load-carrying characteristics are being created. The main contractors for the new program are the KamAZ and Ural automobile plants. Using their experience and current experience, these enterprises are currently creating their own versions of multipurpose vehicles for the army.


The Kama Automobile Plant is creating the KAMAZ-53958 project, also known under the designation KAMAZ-6560М, as part of the Tornado program. The goal of this project is to create a universal multi-purpose chassis with high mobility and carrying capacity. In accordance with the terms of reference, a four-wheel drive four-wheel drive chassis in the future should be the basis for military equipment for various purposes. The new chassis will be equipped with equipment to carry cargo, as well as be able to become the basis for various types of combat vehicles. Work on the project "Tornado" is scheduled for completion over the next few years.

According to reports, the current project KAMAZ-53958 / 6560M dates back to an older design. In the middle of the last decade, experts of the Kama Automobile Plant presented the KAMAZ-6560 chassis with the wheel formula 8х8. This car could transport up to 20 tons of cargo and was created as a replacement for the KAMAZ-63501 chassis, which did not fully suit the military and defense industry. The main impetus for the emergence of the KAMAZ-6560 project was the development of the Pantsir-С1 anti-aircraft complex, which required a chassis with the appropriate characteristics. Due to the lack of a car with the required parameters, KamAZ developed a new chassis. 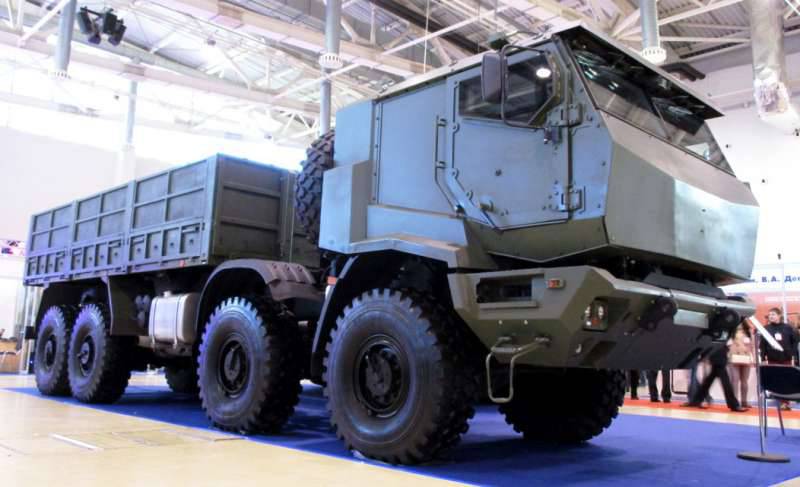 In 2012, a new project for the development of promising automotive vehicles was launched, which received the designation “Tornado”. The main goal of this program is to develop universal platforms that can be used for the construction of various equipment for solving various tasks. The project, created by the Kama Automobile Plant, received the designations KAMAZ-53958 and KAMAZ-6560М. The latter, it should be noted, speaks directly about how to create a new technology and clearly hints at the maximum possible use of existing developments.

According to the available data, the Tornado program was based on a number of requirements concerning the improvement of the main characteristics of promising technology. So, due to the creation of nodes with the highest possible characteristics, as well as with the help of embedded diagnostic systems, it was necessary to increase the reliability of equipment 1,5-2 times. Engine power should be increased 1,2-1,4 times, which would increase the average speeds on various roads and thereby improve mobility by 30-40%. By reducing the time required to prepare the equipment for operation, the level of readiness for use was required to increase 1,5 times. Finally, the project requirements stipulated a reduction in the visibility of technology for various means of detection.

It took some time to develop a new project, after which the Kamsky Automobile Plant was able to demonstrate a promising special car. The first demonstration of the car with the KamAZ-6560М index took place in 2014, at the show in Bronnitsy. This car had a four-axle chassis and a characteristic protected cabin. Any additional equipment was not mounted on the exhibition chassis: the frame remained empty.

In October last year, the KamAZ-6560М / 53958 car in a modified form was shown at the Interpolitex-2015 exhibition. In the period between the two exhibitions, the car received a number of additional equipment. In this case, the most notable innovation was the installation of the onboard body. The equipment of the Tornado family is intended for solving various tasks, including the transport of goods. One of the transport configurations of the KAMAZ-53958 car involves the use of a body with folding sides. 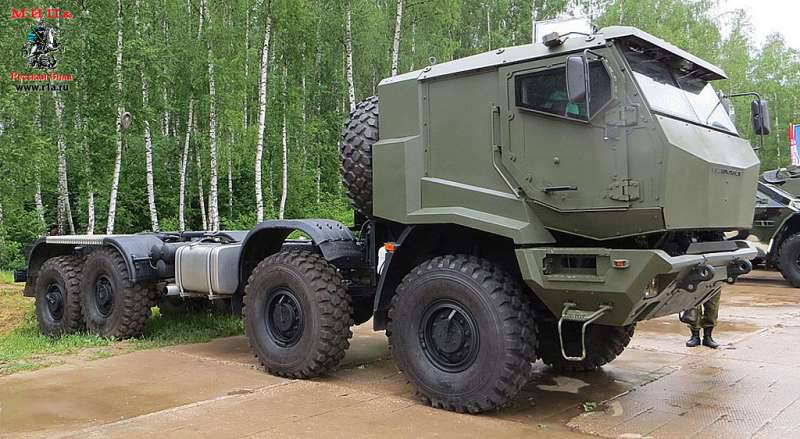 In the future, new versions of additional equipment for Tornado machines from the Kama Automobile Plant may appear. In particular, there is already information about plans to develop a special modification that will be used as the basis for the upgraded Pantsir-SM anti-aircraft complex. Available data on such a combat vehicle suggest that the use of a new chassis will improve some of the characteristics of the complex, including an increase in missile systems.

In its current form, the KAMAZ-53958 / 6560М is a four-wheel-drive all-wheel drive vehicle with a secure cockpit and the ability to install various means for the transport of goods or other tasks. The car was built according to the frame scheme traditional for the Kama plant and has a bonded layout. All chassis units are mounted on a frame that runs the entire length of the machine. It fastens the elements of the chassis, power plant, cab and the necessary target equipment.

One of the most noticeable differences between the KamAZ-6560M and the base KamAZ-6560 is the characteristic cabin. In order to simplify development and production, it was decided to use a ready-made cockpit borrowed from the Typhoon-K armored car. The cabin has kept the main dimensions and layout. It accommodates three people and provides full control of all systems of the machine. For the safety of the crew cabin is equipped with armor, providing all-round protection in the class "6" domestic standards. Thus, the crew is protected from armor-piercing incendiary bullets of rifle cartridges.

Inside the cabin are the jobs of three crew members. The driver has a steering wheel, gearbox control levers and other systems, pedals, etc. In difficult situations, the driver can also use a set of video cameras installed around the perimeter of the roof of the car. The signal from them is displayed on the monitor in the cabin. Cameras can be used, in particular, in case of damage to the main glazing, consisting of two large windshields and two windows in the doors.

Being borrowed from the existing armored car, the cabin of the Tornado car retained its characteristic casing in the rear, located on the left side. Inside it is the engine radiator and part of other equipment for various purposes. To the right of this casing on the rear wall of the cabin provides for mounting for the spare wheel. 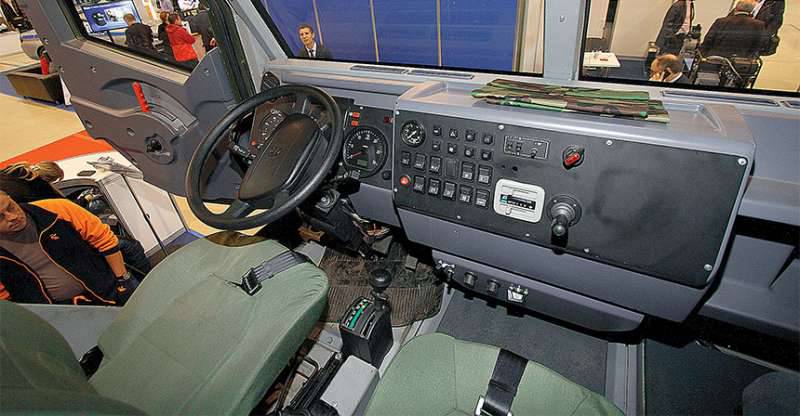 It is proposed to install a KAMAZ-910.10 hp 550 diesel engine under the cab. Such a power plant should provide a relatively heavy machine with high mobility and carrying capacity. For example, the total mass of KAMAZ-53958 "Tornado", according to the manufacturer, reaches 40 t, of which up to 25,4 t may fall on the equipment being mounted. Despite the relatively large weight, the car will be able to accelerate on the highway to 100 km / h. With the help of two fuel tanks with a capacity of 350 l it is planned to bring the cruising range to 1000 km.

The running gear of the perspective car is based on the units of the base KAMAZ-6560. It has continuous bridges and is equipped with leaf springs. On axles mounted wheels size 16.00 R20 Belarusian production.

According to reports, the platform KAMAZ-53958 can be the basis for equipment for various purposes. A truck with an onboard body is already presented, there is also information about the creation of a special chassis for advanced anti-aircraft complexes. It is possible that in the future new versions of this chassis will be developed for other tasks. Earlier it was reported that at the present time various design and test works are being carried out, which in the near future will allow to launch mass production of new automotive vehicles. The first serial "Tornado", according to previously announced plans, should be off the assembly line in 2017 year.

The proposed project KAMAZ-53958 / 6560М is of great interest to the armed forces, because it allows to unify the equipment for various purposes as much as possible. However, this machine, apparently, is not without flaws. In the 2-th issue of the magazine "Auto Review" for 2016, the article "Armored Platform" was published, devoted to a promising project. The author of this publication got acquainted with the model of the Tornado machine during the Interpolitex exhibition and drew some conclusions. In particular, he drew attention to the shortcomings.

During the exhibition, allegedly, it was shown not an experienced, but a mock-up exhibition sample of a promising machine. Nevertheless, despite this, he had a number of negative features. For example, it was mounted on a relatively old body, on which even rust appeared. Fenders and reflectors also did not differ in high quality production. However, there were drawbacks not only of a “cosmetic” nature.

The sample, judging by the appearance of its units, was not equipped with a new KamAZ-910.10 engine, but received a less powerful powerplant of the existing type. The appearance of the gearbox control lever allowed the author of the magazine “Auto Review” to assume that the transmission of the car was made by the American firm Allison. The transfer box can be purchased from Steyr, and lighting equipment is manufactured in Italy by Cobo. Thus, the KAMAZ-53958 project seriously depends on the supply of foreign components, which may be difficult due to the deterioration of the international situation. Due to regular sanctions, the KamAZ plant may be left without the necessary products, which will lead to a halt in the assembly of new equipment. 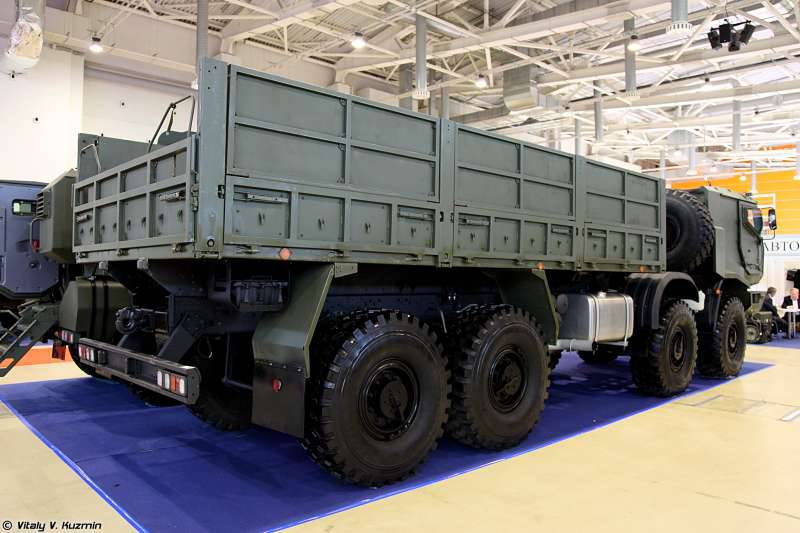 Onboard body of the exhibition sample. Photo by Vitalykuzmin.net

The project has other disadvantages that are not related to the origin of components and assemblies. Thus, a protected bumper is provided on the frame of the car under the cab, smoothly turning into side units with steps for access to the cab. Behind it is a large number of different cables and hoses connecting the cab to the chassis. At the same time, it was clear that at the exhibition between the bumper and the armored cab there is a very large gap, which can affect the survivability of cables in a combat situation.

Also, the author of the article in the "Auto Review" noted not too successful layout of the chassis units. The pneumatic system hoses, which ensure the operation of some undercarriage units, bend too much and approach a dangerous distance to the inner surfaces of the wheels. Thus, there is a serious risk of damage to the hoses when driving.

Some of the shortcomings described in the article “Armored Platform” can be attributed to the purpose of the vehicle presented at the exhibition. She was not a full-fledged prototype, because of which she could have some specific features. Thus, in the future, prototypes of the new "Tornado" may well get rid of problems in the form of rusty bodies or uncovered wires with hoses. However, there is a more serious problem associated with the risk for the entire project. In the power plant and transmission of the car KAMAZ-53958 are actively used components of foreign production, which is associated with certain risks of a political nature.

According to some reports, the mass production of new cars of the Tornado family should begin as early as next year. Thus, for the remaining time, the specialists of the manufacturing plant will have to solve the problems identified and finalize the project accordingly. In this case, the armed forces will be able to get modern multi-purpose vehicles with high performance, which will be used to solve various tasks, from the transportation of goods to the construction of new combat vehicles.