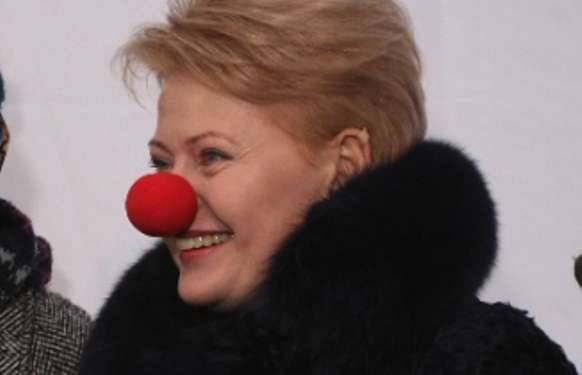 On Saturday, February 13, Lithuanian President Dalia Grybauskaite will take part in the Munich International Conference, where he will discuss with the presidents of Finland, Poland, Ukraine and the President of the European Parliament the main challenges in international security policy.

D.Grybauskaite will speak at the presidential debates on the topic "Current and Future Challenges of the International Security Policy." This time, she did not fail to seize the opportunity to satisfy her personal political ambitions and to publicize herself in the international arena. The head of state continues to assert that the most important priority of Lithuania and the entire transatlantic community in connection with the tense geopolitical situation and existing threats remains the strengthening of security and defense.

Playing the role of a "strong" Lithuanian politician - the "leader" of the Baltic countries, the President of Lithuania, using the so-called "threat map of Russia", played in the war games and is so busy with them today that she simply does not have time to fulfill her official duties. and, apparently, desires. As evidenced by the problems that have emerged on the surface in the country.

According to the Eurostat mortality atlas (data on the mortality rate in the European Union), the inhabitants of Lithuania live the least in terms of life expectancy. The situation is aggravated by a high level of unemployment, in which young people cannot get a job. According to economists, raising the retirement age led to an increase in unemployment (more than 300 thousand people), the consequence of which was the acceleration of incessant emigration. According to the Department of Statistics of Lithuania, over the past 10 years, the country's population has decreased by a quarter, more than 700 thousand people. Thus, when people travel abroad per capita, Lithuania occupies one of the first places on the European continent (emigration rates are comparable to the current flow of refugees from countries in Africa and the Middle East who are fleeing war, crossing the sea obstacles to life) .

The International Bureau of Emigration in Vilnius records an increasing number of young and educated people leaving, the number of those leaving with children is increasing, and those who had previously planned to return more often change their mind and remain in foreign countries.

In addition, according to social indicators, Lithuania leads in such parameters as alcoholism (1 place in the world), number of suicides (1 place in Europe and 4 place in the world), crime, corruption in power structures, etc. It is obvious that overall depressiveness of life in the country and in the future can push the representatives of its population to desperate acts.

There is a clear certainty that D.Grybauskaite will continue to build up hysteria before the NATO summit in Poland after it became clear that the bulk of the US heavy weapons will be deployed in Western European countries, which already have the necessary infrastructure, but not in Lithuania.

If the hysterical rhetoric of D.Grybauskaite does not change, the country risks losing a significant part of the population, and no guns will protect Lithuania from the wholesale flight of citizens. After all, no one wants to live in the frontal zone.

To the question "Is there some kind of" threat from the East "? D.Grybauskaite without a shadow of a doubt will surely answer “Of course, yes!”, Because it is FAVORABLE for her! So intimidate and fool an entire people - you need to be able to. However, for a fictitious lie, sooner or later it will be necessary to answer to your people.

Ctrl Enter
Noticed oshЫbku Highlight text and press. Ctrl + Enter
We are
Dalia Polikarpovna Grybauskaite: Betrayal, Rise and Failure of a Political EquilibristThe agony of Lithuanian Russophobes
68 comments
Information
Dear reader, to leave comments on the publication, you must to register.