The media recorded the era of the new cold war

February 16 2016
16
Speaking at the Munich Security Conference, Russian Prime Minister D. Medvedev stated the "slide" of the West towards a new cold war with Russia. “It remains unfriendly and closed, according to our estimates, the political line of NATO towards Russia. It can be said even more sharply: we slipped into the days of the new cold war, ”Mr. Medvedev said. The American press believes that the premier’s “cold” theses were initially approved by President Putin. 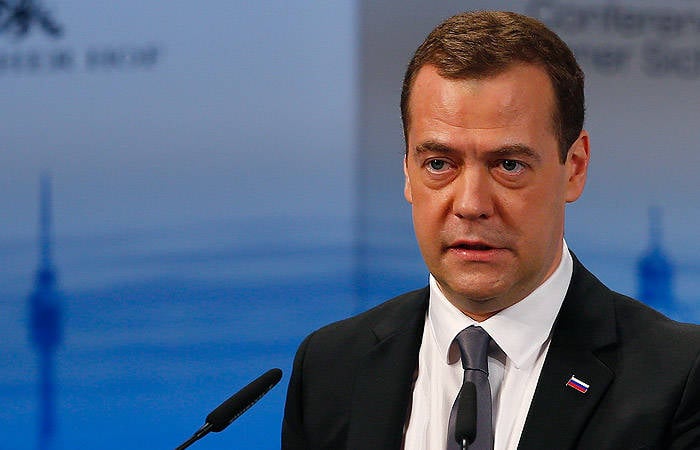 According to Medvedev, the assessment of international relations, made by President Putin at the Munich 2007 Conference of the Year, turned out to be even less pessimistic than the current picture. In those days, Putin talked about ideological stereotypes and double standards. “Let’s ask the question: didn’t we exaggerate the colors too much at that time? - said Medvedev. - Maybe our estimates were too pessimistic? Unfortunately, I must state that the picture today is even more serious. The development of 2007, the year turned out to be much more dramatic. "

The Russian prime minister marked the "break" of communications between Western Europe and Russia.

“In this sense, our intensive dialogue on the future architecture of Euro-Atlantic security, on global stability, on regional threats is now particularly needed. I consider it abnormal that in many areas it almost completely broke off, Medvedev quotes. TASS. - Almost everyone recognizes the problem of communication - both in Western Europe and in Russia. Paralyzed mechanisms that allowed the timely removal of mutual concerns. Moreover, we have lost the culture of mutual arms control, although for a long time it was she who served as the basis for building confidence. One by one, partnership initiatives are dying out, which cost us a lot of strength. In fact, the draft European Security Treaty has been frozen. The idea of ​​creating a committee on foreign policy and security, which I personally discussed once with the German Chancellor Angela Merkel in Meseberg, has not been implemented. It remains unfriendly and closed, according to our estimates, the political line of NATO towards Russia. ”

“We can also say sharper: we slipped, in fact, during the new cold war,” the prime minister concluded. - Almost every day we are declared the most terrible threat for NATO as a whole, now separately for Europe, then for America and other countries (colleague Mr. Stoltenberg also just demonstrated this), they make scary films in which Russians start a nuclear war. In general, I sometimes think: do we live in 2016 or in 1962? ”

The major Western press could not ignore Medvedev's statement about the new Cold War.

Los Angeles Times put the article under the heading "Russian premier: 'We have slid into ... a new Cold War'".

On the other hand, the special correspondent of the publication Mansur Murolev (Mansur Mirovalev) showed the theses of D. Medvedev, voiced by the Munich Security Conference. If Medvedev mentioned the "unfriendly" political line of NATO, the Los Angeles Times journalist pointed to the "accession" of the Crimea, Russia's support for Bashar Assad and the struggle of Moscow against the Syrian "rebels".

Russian Prime Minister Dmitry Medvedev revived the “ghost” of the new cold war on Saturday last week. Medvedev compared the current tensions between Russia and the West with the Cuban 1962 missile crisis of the year, which brought the world to the brink of nuclear war, the journalist writes.

According to the reporter, relations between Russia and the West resemble a “downward spiral”. Why? Moscow in the 2014 year annexed the Crimea and supported military operations in the east of Ukraine. In response, the West introduced a series of economic sanctions against Russia. Tensions grew even more when Moscow supported Syrian President Bashar Al-Assad, including conducting bombings of “Western-backed rebel groups,” the author notes.

If US Secretary of State John Kerry thinks that “the cold war is long over,” although there is still a need to “defend freedom and fight for peace,” then NATO Secretary General Jens Stoltenberg is much more “tough”.

“We have seen a tougher Russia, Russia, which destabilizes the European order and threatens security,” he said. - But NATO does not seek confrontation, we do not want a new cold war. At the same time, our answer must be firm. ”

Calling for a dialogue with Russia, Stoltenberg immediately added that NATO was conducting the most serious collective defense in the last decades. And this will serve as a "powerful signal" to deter "any aggression or intimidation." Further, Stoltenberg stated the onset of the “new reality”.

Strangely enough, the journalist notes, it was Munich that became the place of the “fiery” Putin’s speech from 2007, which is now interpreted as “Moscow’s attempt to renew the cold-war rhetoric and regain the status of a superpower.” In fact, Putin accused the West of creating a "unipolar world", and NATO accused of "approaching" the borders of Russia.

And now Medvedev says that the communications of Russia and NATO on security issues are “cut short”.

Meanwhile, the correspondent continues, the United States and the Syrian opposition accuse Russia of bombing the positions of so-called “moderate groups” of rebels supported by the West. Russia responds by saying that it is guided by the position of the "Islamic State".

Russia, the author notes, “categorically” supports the Assad regime and rejects the proposals of the West and the Sunni Arab states wishing to remove Assad from power.

Not relieved and tensions in matters of the Ukrainian crisis.

Mr Kerry called on Russia to de-escalate the situation in eastern Ukraine, making it clear that otherwise Moscow would live with sanctions. “Russia has a simple choice: fully implement the Minsk agreements or continue to face economically dangerous pressure of sanctions,” he said.

Sanctions, along with a sharp fall in oil prices, have driven the Russian economy into recession, the journalist recalled. The recession is “exacerbated by corruption and an increase in military spending.” “A powerful anti-Western campaign,” he notes, in the Kremlin-controlled media still retains Putin’s rating on the “significantly higher 80%” indicator.

There are two polar points of view: 1) the new round of the Cold War is completely on the conscience of the Kremlin, since Moscow “annexed” the Crimea and supported Assad, bombing “moderate rebels” in Syria; 2) NATO’s political line towards Russia remains "unfriendly and closed." And it has been such since the time when NATO surrounded Russia with new military bases. According to NATO officials, their organization does not seek confrontation and does not want a new cold war.

In a word, she found a scythe on a stone.

The parties say the opposite and do not hear each other. Moscow through Medvedev’s mouth calls for a dialogue “on the future architecture of Euro-Atlantic security,” and Washington is demanding “de-escalation” from Moscow, directly hinting that the planet has one owner and it is not registered in the Kremlin. If there is no “de-escalation,” that is, games by the American rules, then Russia will have to live with sanctions. Simply put, with the cold war.

Observed and commented on Oleg Chuvakin
- especially for topwar.ru
Ctrl Enter
Noticed oshЫbku Highlight text and press. Ctrl + Enter
We are
Honey and tar Dmitry MedvedevPreliminary evaluation of the prototype of the unobtrusive Chinese fighter Chengdu J-XX [J-20]
16 comments
Information
Dear reader, to leave comments on the publication, you must to register.