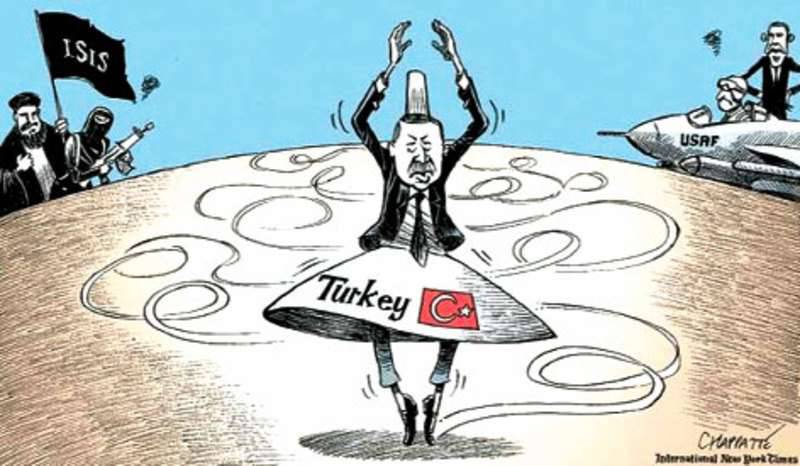 Imagine the sleepless nights in the palace "Sultan" Erdogan in Ankara. Imagine how he learns that the Syrian Arab army, backed by Russian air forces beginning proactive battle for Aleppo - through the area Bayirbukak - cutting the main arms supply corridor and link jihadists.

Who controls the corridor, the controls and the final outcome of the war in Syria.

Meanwhile, in Geneva, the remotely controlled Syrian opposition, the High Negotiations Committee, clearly demonstrated that they never wanted to meet with the delegation of Damascus in the first place — the “close ones” would be negotiations or some other ones, even after Washington and Moscow agreed on a two-year transition plan leading to the existence of theoretically secular, non-sectarian Syria.

The Saudi front wanted no less than Ahrar al-Sham, Jaish al-Islam and all Jabhat al-Nusra, aka al-Qaida in Syria, were present as representatives at the negotiating table in Geneva. So, the enigma of Geneva is faster than you can say “To Aleppo!” Showed who is who.
And forget about NATO

The notorious Saudi intelligence mastermind, Prince Turks, a former mentor of Osama bin Laden, went to Paris with a PR campaign; all he could think of was an avalanche of non-denying denials - and the accusations in the entire Syrian tragedy of Bashar al-Assad.

The bulk of the Syrian "opposition" turned out to be divan warriors who for many years collaborated with the CIA, as well as vassals / scapegoats of the CIA Muslim Brotherhood. Many preferred the amusement of Paris to hard work on the Syrian land. Now the “opposition” is basically warlords who turn to House Saud even for a bottle of water, they do not pay attention to the ministers in suits and ties from the Baath Party, assembled to represent the face of the opposition for the credulous western corporate media.

Meanwhile, "4 + 1" - Russia, Syria, Iran, Iraq, plus Hezbollah - determine the decisive factors on the ground. Breakthrough - there will be no regime change in Damascus. But no one let know about these the news Turks and Saudis.

"Sultan" Erdogan flounders in a sea of ​​despair. He continues to divert attention from incredibly serious problems waiting to be resolved for the sake of his own war against the PYD - the covering organization of the Syrian Kurds - and the YPG (people’s defense units, their military wing). Erdogan and Prime Minister Davutoglu wanted the PYD not only to be banned from appearing in Geneva, but eager to destroy them, as they consider the PYD / YPG to be terrorists associated with the PKK (Kurdish Workers Party).

But what is going to do "Sultan" Erdogan? Do not pay attention to the recently arrived 4G ++ Dry Su-35C - which scare everyone to the "Doctor Strangejour" of NATO? The Turkish Air Force introduced an "orange" level of threat on their bases, which can scare, at best, the stroller-dog abandoned by the owners. The same applies to the NATO Secretary General, in this case in the person of Jens Stoltenberg, who begs Russia to "act responsibly and fully respect the airspace of NATO."

Already frightened, NATO will not support the stupidity of Erdogan’s war against Russia - no matter how the neocons of the United States and Britain crave it, after all, NATO’s decisions may be anonymous, and the last thing the European powers Germany and France want is another war in South-West Asia. NATO can deploy old Patriot missiles in southern Anatolia and AWACS to support the Turkish Air Force. But only.
Select your favorite mode shift

at this time LIH / IG / Give continues to benefit from its own jihadist highway length 98 km through the Turkish-Syrian border, particularly in Dzharablus and Al Rai from Gazantipa and Kilis in Turkey.

Taking the example of Israel, Ankara builds a wall with a height of 3,6 meters between Elbeyli and Kilis, essentially for propaganda purposes. Since the jihadist highway, with all the rest, remains open - even though the Turkish armed forces may fear some offenders. We are talking about the monstrous pattern of smugglers / soldiers; what is the cost of moving $ 300 from hand to hand for switching every night and the fact that a Turkish sergeant can earn up to $ 2,500 just by turning away for a few minutes.

The real question is why Gazantip is not under the cap introduced by Ankara, with thousands of members of the Turkish special forces actually fighting in a “land war”. This is because Ankara and the provincial authorities cannot do a damn thing, because in reality Erdogan’s priority is the war with the Kurds.

And this brings us back to the only leverage of the Sultan at the moment. From Brussels to Berlin, sensible people are horrified that the EU has now become a hostage of Erdogan’s Kurdish “priorities”, while Ankara does little to fight the massive illegal entry of migrants.

When Davutoglu recently traveled to Berlin, he not only made no promises, he again stressed Erdogan’s oath to “destroy” the Syrian Kurds.

And this explains the despair of German Chancellor Angela Merkel. How could the most influential politician in Europe be able to peck on such a rude racket and extortion? “Sultan” wants a lot of money, a lot of concessions, and even aims at joining the EU. Otherwise, he will not block the ominous stream of refugees.

Not surprisingly, the rage rumors about a regime change. In Ankara? No, in Berlin.

Ctrl Enter
Noticed oshЫbku Highlight text and press. Ctrl + Enter
We are
Spiders in the bankTragedy in Ankara. Who blows up Turkey?
64 comments
Information
Dear reader, to leave comments on the publication, you must to register.