February 15 2016
65
American intelligence officers warned: in the United States, terrorist acts may occur that the militants of the "Islamic State" will arrange. The warnings of intelligence echoed the American press. Analysts and experts amicably call on Washington to say thanks to Moscow for the Syrian operation and to consolidate in Syria with the Russians. Some even suggest that the White House adopt Russian policy.


Militants of the “Islamic State” may try to organize terrorist attacks in the US, CIA Director John Brennan told 15 in February, giving an interview to CBS television.

"I think they will try to smuggle their people here, the materials they need for this," the CIA head quotes "Lenta.ru".

Terrorists can also count on mercenaries recruited in the United States.

True, Mr. Brennan doubts their success: “I don’t think they will succeed.”

But both the goals and the strategy of the militants are known to him: in his opinion, the terrorists of the ISIS are trying to provoke a conflict between the West and the Muslim world. What for? The task of the militants is to attract new supporters to the ranks of the IG.

Stephen Kinzer article in the American newspaper "The Boston Globe" came out with a photo of Russian bomber'a Su-34. It is a pity that the material is placed only in the heading "Opinion", and does not flaunt on the front page. Abstracts shown by the author, are worthy of reader attention. In addition, Kaynzer is not a simple columnist, but an expert, senior researcher at the Wattson Institute for International Studies at Brown University.

According to the scientist, Moscow has proved: it knows how to make a strategic choice better than the United States. The author proposes to “postpone” a hostile attitude towards Russia aside and move on to cooperation.

You can start with joint work on Syria, because it was here that the United States led an ill-considered policy for five years. The mistake was in upholding a tough position ("Assad must leave"). Because of this, the Syrian opposition was not interested in negotiations for a peaceful transfer of power in Damascus. The author hints that the United States is responsible for the "bloody nightmare" in Syria.

Now chaos and terrorist attacks from Islamist fanatics are threatened by both the United States and Russia. Therefore, the White House should conduct a policy similar to the Russian one, take an example from Russia. Washington should "prevent the fall of the regime of the government of Bashar al-Assad." And the new Syrian government should also include Assad or his supporters, the expert is sure, because the fall of Assad will lead to a “catastrophic vacuum” in power. The United States has already known the sad results of such wars: Iraq and Libya have become a “paradise for terrorists.” And this kind of outcome in Syria will be equally bad for both the United States and Russia.

Therefore, Washington "must recognize" that there is a common interest in resolving the conflict in Syria both for the United States and for the Russian Federation. We need to start cooperating with the Russians.

However, there is a serious hindrance: the very proposal for cooperation with Russia, the author further notes, is “hated” in Washington. Why so? It comes up against the eternal conviction of all those who make up the American establishment that Russia is the “eternal enemy” of America. That is what liberals, conservatives, republicans, and democrats think so. In determining the enemy, they come to a consensus.

Meanwhile, American rulers need to recognize that Russia could be a partner, despite a number of disagreements.

The author takes a retrospective look at history.

In his opinion, in the past, Americans, too, should have followed the course of Russia. For example, in Afghanistan. Moscow supported the government of Najibullah in Afghanistan, and it turned out to be “more honest and progressive” than the rulers who sat on the throne after the overthrow of Najibullah, supported by the Americans.

Later, Russia called on the United States to abandon the idea of ​​invading Iraq and overthrowing Hussein.

The scientist believes that in both Afghanistan and Iraq, the United States made mistakes, and the Russians were right.

For the third time, Moscow did the right thing in Syria.

In the interests of the United States, the expert believes, to maintain power here for B. Assad. There is no alternative: without Assad, the region is threatened with a “caliphate” from the igilovtsy.

The main thing for Washington is not Assad at all, but the weakening of the IS and other Islamist groups. The fight against these militants is the main goal of the current policy of Russia, as well as Iran. And Washington needs to work with them. A complete refusal to cooperate with the Russian Federation is only a “relic of a past era”.

Paul R. Pillar also writes on the topic of US cooperation with Russia in the Syrian region "The National Interest". Pillar - a regular contributor to the journal, invited art. Researcher at the Brookings Institution and Invited Art. Researcher at the Center for Security Studies, Georgetown University.

The expert makes fun of the commonplace clichés of the Cold War era, replicated in the leading American media like the Washington Post. Political commentators do not experience a “lack of confidence,” arguing about the actions of Moscow in Syria. The hawkish journalists categorically declare that the “Putin regime” is not trying to achieve a truce at all, but a victory over the “rebels” supported by the democratic West. Much of this kind of “comments” is simply ripped off from the materials of the Cold War era, the author points out.

But today is not the time of the "cold war." In addition, not all actions can be considered a "zero-sum game." Yes, other goals of Moscow contradict the goals of the United States, but others are neutral with respect to American interests. Finally, we must not forget that the third goals correspond to American interests.

As for Syria directly, a purely military solution is unattainable here, regardless of the success of the government army in the Aleppo area. Even a victory over opposition forces in Aleppo will not mean that the opposition will subside. Putin is perceptive, and he understands this, unlike the authors of the articles in the Washington Post.

The author’s conclusion: Russia in Syria is “very interested” in reaching an agreement on a peaceful settlement.

At the end of the article, the expert practically repeats the theses of Stephen Kainser, whose material was discussed above.

A potential US presidential candidate, Donald Trump, is also ready to cooperate with Russia on the Syrian issue.

At the debates shown by the TV channel CBS NewsIn which potential Republican candidates participated, Donald Trump brought an avalanche of criticism on his rival Jeb Bush, who had previously tried to criticize Trump’s microphone. 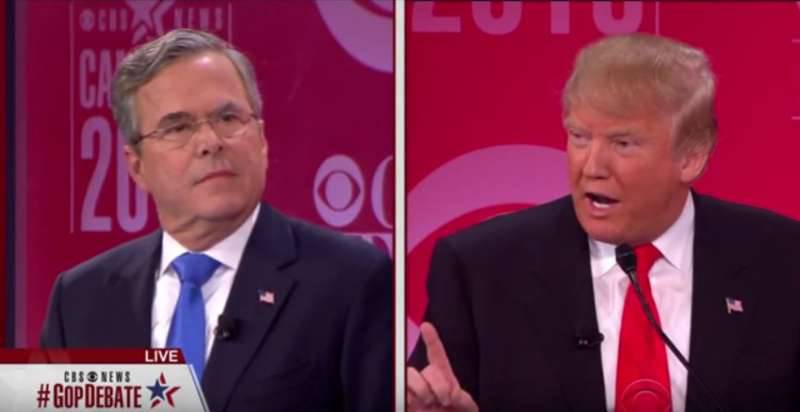 An anchorman asked Bush a question about Washington’s possible cooperation with Moscow. Jeb Bush used the question to criticize Trump’s position, recalling that he was a supporter of working together with Moscow to defeat IS and to peacefully resolve the conflict in Syria. According to D. Bush, Putin is not going to be an ally of the United States at all, and Russia is by no means aimed at IS. Russia is fighting with rebel groups that have been trained by the United States and which the United States supports. Bush does not believe in the “positive role” of Moscow in the region.

As we see, Bush simply repeated popular cliches, similar to those replicated in the Washington Post.

In turn, Donald Trump said into the microphone that he likes Putin’s actions, but Jeb Bush is mistaken. Bush is not right in discussing Assad’s “departure” from power. Trump said so in his expressive manner: “Jeb, you are mistaken.”

He further advised Jeb to fight the IG together with Russia, Iran and Syria (including Assad). This combined force destroys "IG". And only then you can decide what to do next.

According to Trump, two wars cannot be fought at the same time. The US has already broken firewood in the Middle East, spending huge amounts of money and supporting armed people in Syria, "without the slightest idea who they are."

So, in today's press of the USA, and at the same time in the election campaign, there are two opposite slogans: 1) Russia and the USA not on the way, the “cold war” resumed, in Syria Putin beats the “rebels” supported by America; 2) The United States and Russia should beat the IG together, since the terrorists threaten both states equally, and there is every reason to consolidate forces.

If the first point of view is held by “hawks” (whatever they are, whether they are Democrats, Republicans), then the second point of view is characteristic of those analysts and experts who are able to think objectively, moving away from the cold days of the Cold War.

Ctrl Enter
Noticed oshЫbku Highlight text and press. Ctrl + Enter
We are
Results of the week. "Guys let's be friends!"Syria: Americans scare themselves, and Asma Asad buys chairs
65 comments
Information
Dear reader, to leave comments on the publication, you must to register.