Spies Period of scandals and revelations. Part of 3

February 19 2016
10
Separate information about how the formation of intelligence centers and agents, can also be found in the press of past years. 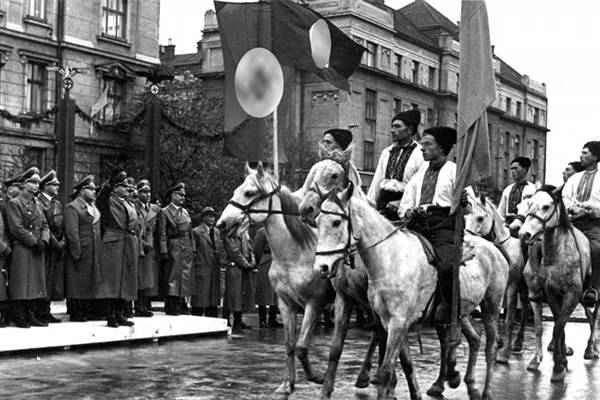 Bishop Ryan 12 May 1940 wrote in the New York Times that the Vatican is “the most knowledgeable organization in the world. Thousands of well-trained officials and unofficial officials, in particular diplomats, work for him, gather information for him: he thus has the best intelligence in the world. It is ridiculous to think that Germany, France and England recognize the Vatican out of a high sense of Christian charity. If they give anything, they expect to get something in return. ”

Former member of the Jesuit Order A. Tondi, hotly interested history intelligence, I wanted to write for the magazine an article on "Russicum" and illustrate it with photos of students. Tondi writes in his book “The Jesuits” that the secretary of the papal Gregorian University, Houdon, to whom he then turned, “objected in a categorical tone:

- How, my father, do you really not know that these people risk their lives?

“The priests,” said the Goudon, “but not the priests.”

27 March 1952, Cardinal Tisserand, in a speech delivered at the Catholic University of Louvain (Belgium), said that back in 1921, hundreds of Russian white officers had taken refuge in the “Slavic University Focal Point”. We also learn from Tisseran’s speech that "thousands of Rusyns and Ukrainians" (from Bandera), who were gathered in fascist Italy during the Second World War, in camps near the city of Rimini, under the supervision of the Tisseran congregation, were trained to join Catholic universities. " Tisserna said he signed hundreds of diplomas.

Particular attention is drawn to the impeccable assimilation of peoples' languages. Literature and history of these countries, folk customs, songs, Orthodox worship, folk proverbs and sayings were taught.

19 September 1951 of the TASS reported: “In Warsaw, a process took place among members of one of the underground organizations, led by the Jesuits. The priest Rostvorovsky and Stanislav Nawrotsky, a member of the Jesuit order, as well as Adam Stanovsky, Wieslav Goronko and Andrei Sondrovsky, appeared before the court. The defendants, hiding behind church and religious activities, conducted work against people's Poland, against the interests of the Polish people. " It was established that the defendants were associated with foreign intelligence services and underground anti-people organizations. As Pravda newspaper wrote (September 20 1951 number): “On the instructions of the Vatican, the defendants tried to sabotage the development of western lands, instructed their accomplices to join trade unions and conduct schismatic work there.”

In Albania, the Jesuit Order also showed itself: for example, at the beginning of 1945, the Vatican agents, in alliance with other foreign intelligence services, were plotting and armed coup. One of the centers of the uprising was to be the “Albanian Union”, headed by Daniel Danami and the Catholic priest Giovanni Fausti.

The headquarters of this organization was a seminary in Scutari, where personnel for subversive work was also trained. The leaders of the Albanian Union developed a plan to create a Black Hand terrorist group to carry out terrorist acts against the leaders of Albania.

But the Vatican intelligence in Czechoslovakia was particularly strong.

In 1946, an underground fascist organization was liquidated in Czechoslovakia. Among others, Catholic priests also participated. One of them, Professor Tomislav Kolakovich, is a very colorful figure. Back in 1943, he was sent to Czechoslovakia to collect relevant intelligence data for the Vatican. About a year later he was able to get into the rebel units operating in Slovakia. He transferred the information there through the Catholic priest Shkrabik. When Czechoslovakia was liberated from the Nazi troops by the Soviet Army, Kolakovich as a "anti-fascist" still enjoyed the confidence of the new authorities, and this facilitated his work. But in 1945, he traveled to Rome and returned with new instructions, according to which he had to prepare a whole network of intelligence groups. In the same year, Kolakovich illegally crossed the south-western border of the USSR in order to establish contact with the clergy of the Uniate Church in those districts that until the 1939 of the year were part of Poland. He was instructed to offer them help with money and weapons for arming Bandera gangs. On the northern slope of Karpatsky, Kolakovich was able to meet Stepan Bandera (he was the son of a Greek Catholic priest) and promised to help with money, weapons, food and communications. It is known that Kopakovich for these purposes received from the monastic order Basilians around 150 000 crowns. It was decided to pass on all the necessary things through the Uniate Church on Charles Street in Prague. For three years, from 1946 to 1948, the Uniate Bishop Goydich, the Basilian Provincial of Sabol, the Uniate “theologian” Buranic (actually the head of the Bandera “civil network”) and other equally important personalities worked here. The church became the base supplying Bandera with false documents and money. From here, instructions were sent, information gathered here was obtained by Uniate and Bandera spies.

By the way, at the end of 2015, information appeared that the Uniate Church prepared the relevant documents necessary to begin the process of canonization of Andrei, father of Stepan Bandera, who was accused of participating in the nationalist movement and shot in 1941. Andrei Bandera was also charged with Andrei Sheptytsky, who became the head of the Uniates even before the First World War. He belonged to the richest old noble family, who in the XVIII century gave the Metropolitan of Uniate Church. In his youth, Andrei Sheptytsky was an officer in the Austrian cavalry. Associating with him their foreign policy plans directed against Russia, the German emperor Wilhelm II and the Austrian Franz Joseph were not mistaken: they found in him a faithful person who supported their policies. In particular, he tried, at the direction of Pope Leo XIII and the Jesuits, to intensify the declining order of the Basilians, which was, in essence, a disguised branch of the “Society of Jesus”. When, finally, the First World War broke out, Sheptytsky openly blessed the army of William and Franz Joseph. But when the Austro-German units retreated before the onslaught of the Russian army and Russian troops occupied Lviv, Metropolitan Sheptytsky was arrested as an Austrian agent. Released shortly by the Provisional Government, he began to actively establish contacts with Marshal Pilsudski.

Also within the organization “Ukrainian National Democratic Union” (UNDO), he created his own group, the Ukrainian Catholic Union, which 17 on April 1932 of the year stated in the newspaper Meta: “Ukrainian nationalism must be prepared for any means of struggle against communism, not excluding mass physical extermination, even if donating millions of human existences. ”

In 1936, Sheptytsky solemnly called the German-Italian fascists who invaded Spain "Lions of Alcazar". 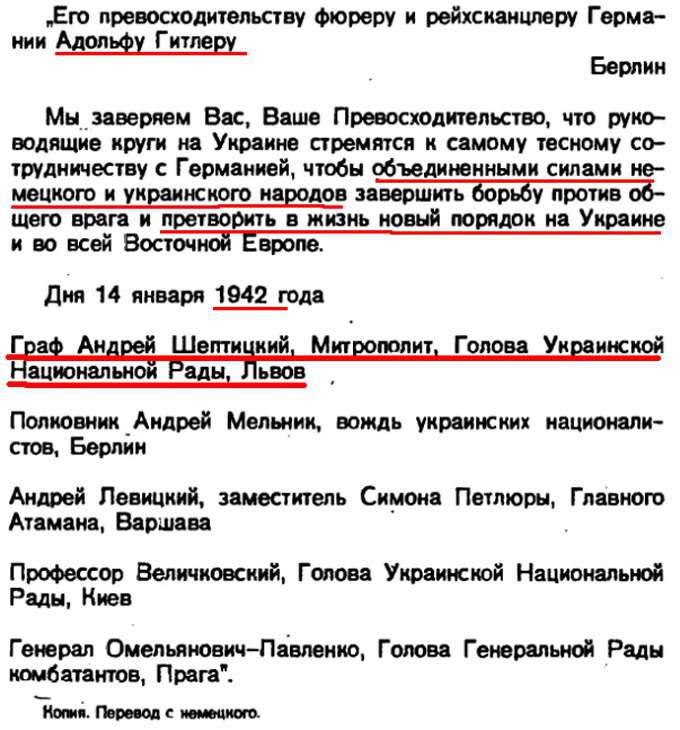 "Your Excellency! As the head of the Ukrainian Greek Catholic Church, I convey to your Excellency my heartfelt congratulations on mastering the capital of Ukraine, the golden-headed city on the Dnieper - Kiev ... With special respect, Andrew, Count Sheptytsky, Metropolitan. ”

The second document was written on January 14 1942 of the year and sent to Hitler on behalf of the Ukrainian fascists who asked to be allowed to power:
“We assure you, Your Excellency,” said the letter, “that the leading circles in Ukraine are striving for the closest cooperation with Germany in order to complete the struggle against the enemy and to carry out the new order in Ukraine and throughout Eastern Europe”.

Sheptytsky was the first to sign, and other signatures were already behind him. 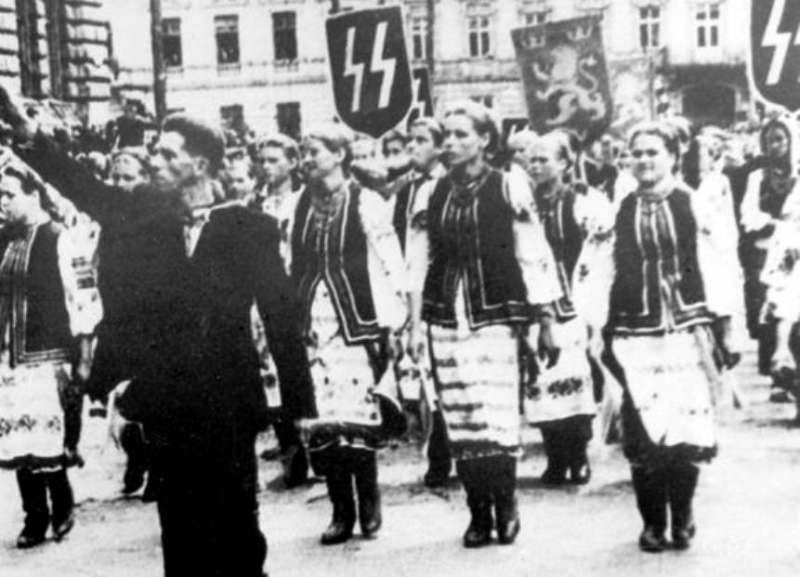 Nobody really hid the fact that the main intelligence information flowed into the Cathedral of St. George: it was here that the Abwehr service was located, Hans Koch, the personal representative of the head of the German intelligence, Admiral Canaris, was active. Koch, among other things, was engaged in the affairs of the Uniate Church and the OUN.

When the Soviet troops liberated Ukraine, Sheptytsky began to speak with blessing words about the liberators, he even wrote a letter to Stalin, but it was not sent because of the sudden death of the metropolitan. There is a version that the death of the Metropolitan, who unexpectedly switched to the side of the Bolsheviks, was aided by his associates, who were disturbed by this Bolshevik activity of the leader, who branded Bandera and all organizations related to anti-Soviet activities, previously hotly supported by Sheptitsky.

At that time, the passage of the Uniate priests was not uncommon. But it cost a lot of life. A series of mysterious murders swept in Lviv. Thus, in Lviv, the former Uniate priest Gabriel Kostelnik, who was in favor of dissolving the Uniate Church, was killed.

Eleven times with an ax on the head! Such a brutal murder in 1949, Yaroslav Galan for many years is striking in its cruelty. Which with its articles and pamphlets - “With a cross or a knife”, “What is Uniya”, “Twilight of other gods”, “Fathers of darkness and prince”, “In the service of Satan”, “Apostles of betrayal” - openly showed the real face of Bandera minions . Yaroslav wrote the truth, and she didn’t like the surviving gangsters and their patrons, who spoke directly and openly about their atrocities, about their helpful work in the German services for the destruction of civilians in the most sophisticated ways that, when they met, they simply shrink to pain heart from atrocities.

Until now, the true customers of the murder of the famous writer are not known.

Unfortunately, today in Lviv a monument to Yaroslav Galan was demolished and melted down.

Bandera activity was so great that in the spring of 1946, they tried to influence the upcoming elections in Czechoslovakia: there they brought more than twenty kinds of leaflets in Slovak, the main meaning of which was slanderous statements to the Communist candidates. They killed several communists. Bandera was helped by many Uniate priests from eastern Slovakia. They acted according to the instructions of Bishop Goydich, in particular, they informed Banderovites about the whereabouts and redeployment of military units. Who drove the Bandrovians into the Polish frontier forests; there the bandits met parts of the Polish army. The Uniate priests in the Bandera gangs tried at this time to escape to West Germany or to Czechoslovakia, where they took refuge in Catholic monasteries, mainly in Moravia.

At this time, one of the major failures happened: in Czechoslovakia, Frantishek Shingal, the main head of the Society of Jesus, was arrested.

Almost simultaneously in Hungary, in 1951, a loud trial "in the case of Jozsef Graes (the caridian Mindszenty) and his accomplices" began. However, these processes only intensified the insurgent sentiment, which ultimately led to the 1956 uprising of the year. But in 1951, a shorthand report was published, from which it follows that the illegal organization “Catholic Front” already had clearly formulated goals: “It’s absolutely open to say that if we now remain inactive, then it’s we who commit the worst sin . It is necessary to ensure communication with those who are our allies against communism, communication with Rome, with the West. Start preparing relevant acts of sabotage, prepare the defense. ”

Ctrl Enter
Noticed oshЫbku Highlight text and press. Ctrl + Enter
We are
Spiritual warfare Trail of the Jesuits in Syria. Part of 1My grandfather's front-line letters (part 2)
10 comments
Information
Dear reader, to leave comments on the publication, you must to register.