February 15 2016
39
The first day of the 52 th Munich Security Conference (February 12) coincided with the anniversary of the signing of the Minsk agreements on Ukraine (Minsk-2). Opening the conference, its chairman, German diplomat Wolfgang Ischinger, called the war in Syria and the incessant flow of refugees and migrants from the Middle East and Africa, which swept Europe, the main security challenges in the world. Ischinger assessed the situation in the world as the worst since the end of the Cold War, and called for solving the accumulated problems through dialogue. 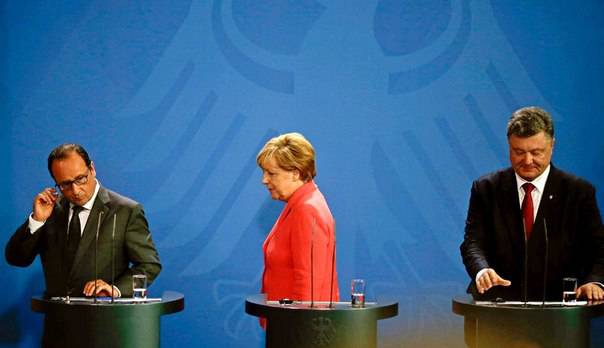 Ukrainian tankers are waiting for the team again?

Wolfgang Ischinger did not mention Ukraine among the priorities of the forum. Approximately also the newspaper The Security Times - a special edition of the conference. She placed an article about Ukraine in the depth of the issue - on the seventh page. Unlike in previous years, when The Security Times made it possible for Ukrainian politicians and experts to roam on their lanes, this time the author of the publication was former US Ambassador to Kiev Stephen Peifer.

The American made a definite conclusion: in order to fulfill the conditions of the Minsk-2 agreement, it is necessary to continue the pressure on all parties to the conflict. Pifer called it unlikely the fulfillment of all points of the Minsk agreements, but considered it real to achieve de-escalation in Ukraine.

The question is not idle. A year after the signing of the Minsk agreements, peace in the east of Ukraine did not come. Even the cease-fire regime is not maintained, from which the implementation of Minsk-2 should have begun. Here is a picture of the last time. “In total, from February 1 to 7 punishers bombarded the territory of the DPR 882 times, including heavy weapons - the 770 times,” said the representative of the DPR Defense Ministry Edward Basurin. "Russian terrorists (this is the Kiev meme of the militia - GG) for 10 in February 50 fired at the forces of the antiterrorist operation once", retorted from the Ukrainian headquarters of the ATO.

Meanwhile, in the roadmap for the settlement of the Ukrainian conflict already 13 points. There are, inter alia, an immediate and comprehensive cease-fire, the withdrawal by both sides of all heavy weapons to equal distances, and the creation of a security zone. Ukraine should remove the economic and financial blockade from the self-proclaimed republics, release all hostages and illegally detained persons and exchange them on the principle of “all for all”. The Minsk Agreement obliges to withdraw from the territory of Ukraine all foreign armed formations, military equipment, and also mercenaries. Disarm all illegal groups.

These are the most important events. For example, the withdrawal of weapons should have been made within two weeks after the conclusion of the agreement, then (at the latest on the fifth day after the withdrawal) to exchange prisoners on the principle of “all for all”.

As we see from the picks of the parties presented above, over the past year the situation has changed little. The shelling continues. Moreover, on February 12, the day of the opening of the Munich Security Conference, the head of the DPR, Alexander Zakharchenko, at a press conference in Donetsk, said (I quote from REGNUM): “Today, there is only one contact line tanks concentrated more than 500 units, about 90 thousand soldiers. Ukraine at any time can start conducting hostilities. Why doesn't she start? I think she’s just finishing mobilization and waiting for the best weather conditions. "

In the absence of political commitment

Experts attribute the militant mood of Kiev to the recent crisis in the country. Ukrainian politicians are now considering the war as a salvation from the current situation. They hope that hostilities in the East will distract people from pressing problems and in some ways even unite them in the face of the “aggressor”.

In the aggressors, Ukraine recorded Russia. It happened right after Minsk. Then, as we remember, the leaders of the "Norman Four" only agreed on a Declaration in support of the Set of Measures for the Implementation of the Minsk Agreements adopted by the Contact Group to resolve the situation in Ukraine. At the final press conference before the journalists waved paper with printed text, uncertified heads of state. Vladimir Putin then said that there is an oral agreement of the "Norman Four", and that is enough. But the Complex of Measures itself was signed by the Contact Group, in which there were representatives of Russia, Ukraine and the OSCE, the leaders of the self-proclaimed republics, Alexander Zakharchenko and Igor Plotnitsky.

This conflict, when the leaders of the “Norman group” essentially abstained from political obligations, allowed the Ukrainian leaders to interpret the signature of the Russian representative in the Contact Group as belonging to Russia to one of the parties to the conflict.

On the new topic, Kiev propagandists and politicians were in full swing. She also liked the West - an extra reason to crush Russia. So they started playing with it that they didn’t even notice the manipulations of Kiev blocking the Minsk agreements. Well, it would apply only to Russia and the self-proclaimed republics of Donbass. In fact, in the center of Europe a steady hotbed of tensions has formed, from which the circles poison the entire political and social atmosphere of the continent.

Now the mood of politicians began to change. They talked about responsibility for the implementation of the Minsk agreements of all parties to the conflict. Such a message was heard, as we see, in the already mentioned article by Stephen Peifer. Many foreign partners of Russia have become more aware of the true causes of the Ukrainian crisis. This was confirmed last week by Vitaly Churkin, Russia's permanent representative to the UN, in a big interview with Rossiyskaya Gazeta. He noted that lately foreign diplomats have shown greater awareness of the domestic political changes in Ukraine and realize that many processes in this country are influenced by neo-Nazi radical groups. The sensational film about Euromaidan by French director Paul Moreira “Ukraine. Masks of the revolution.

Vitaly Churkin now uses the film as a kind of visual aid. Advises representatives of other states to see this documentary truth about civil conflict in Ukraine. American and European politicians attached a hand to it. It was they who endorsed the 2014 th agreement between President Yanukovych and the opposition in February and refused their guarantees the next day. In Minsk, President Poroshenko did not sign anything. Understood: in the absence of specific commitments there will be more opportunities for political maneuvers.

These maneuvers have so far brought only a dead end. In Ukraine, they quickly realized: the refusal of the “Norman four” to undertake specific obligations — a blank check to Kiev for any actions. Therefore, it is not at all necessary to make concessions to the Donbas or even to negotiate with the leaders of the self-proclaimed republics. Instead of an internal conflict, it is much easier to imagine external aggression, asking for money, help, and weapons. The West has not refused anything. Even the fundamental rules of the International Monetary Fund were amended to continue financing Ukraine during the period of its actual default.

It did not lead to the resolution of the conflict, it only increased corruption, aggravated the crisis in society, disorganized the government of the country. In the end, Kiev lost the trust of its patrons. And this is the main reason for the decline in interest in Ukraine, and not the relevance of other international problems that explain Europe’s current inattention to Ukrainian affairs and even increasing pressure from Western partners.

Once the head of the IMF, favored by Ukraine, Christine Lagarde is now "concerned about the slow progress" that Ukraine is demonstrating in the fight against corruption. Apparently, the West was tired of aimlessly financing Kiev, and Lagarde changed her tone.

“I am concerned about the slow progress Ukraine demonstrates in improving government administration, in fighting corruption and in reducing the influence of vested interests on politics,” the head of the IMF now says. “In the absence of noticeable efforts to give a new impetus to reforms and the fight against corruption, it’s hard to imagine that the IMF-supported program will continue and be successful.”

By inertia, Western politicians require Kiev to fulfill the Minsk agreements, but they do it sluggishly, without past interest, as if they no longer believe in an acceptable result for Europeans. The confirmation of this was the meeting of the foreign ministers of the countries of the "Norman Four", which took place on Saturday on the fields of the Munich conference.

The meeting was lightning fast and to no avail. After her, the Russian minister, Sergei Lavrov, did not communicate with journalists. Ukrainian Pavel Klimkin called the last meeting "coordination", and he expects a full-format meeting in early March. The head of the German Foreign Ministry, Frank-Walter Steinmeier, was full of pessimism. He noted that the Ukrainian crisis will not be resolved in the near future. “We are still very far from resolving the conflict,” said Steinmeier.

Meanwhile, the self-proclaimed republics of Donbass are building their new economy, slowly overcoming the difficulties of the Kiev blockade. Last year, the geography of foreign trade in the Donetsk People's Republic expanded to 53 countries of the world, and the main partner here is the Russian Federation. This was stated by the Acting Minister of Economic Development of the DPR Victoria Romanyuk. Referring to the data of the customs department, Romanyuk reported that in 2015, the republic imported 3,5 million tons of goods worth 42,3 billion rubles. In total imports dominated the supply of food products - 58,5 percent. Expanded export opportunities DNR. Only from April to December of last year, the republic sold 1,4 million tons of products worth 11,3 billion rubles abroad. In the structure of exports - metals and products from them, mineral products, food products.

While European diplomats and politicians are trying to understand the true intentions of the Ukrainian authorities, the republics of Donbass are developing the economy. For this they need a reliable and lasting peace. However, like the whole of Ukraine, also pretty tired from the war, political and economic uncertainty. But while in front of European observers, she rolled out hundreds of tanks to the Donbass. It seems that the Minsk agreements will remain a thing in themselves instead of responsible political obligations ...

Ctrl Enter
Noticed a mistake Highlight text and press. Ctrl + Enter
We are
"Trouble" of the Promised Land. African immigration to IsraelRefugees from Syria. Will Russia accept immigrants from the Middle East?
39 comments
Information
Dear reader, to leave comments on the publication, you must to register.