Fortress for the head and body

February 17 2016
31
“They dipped their heads in molten metal.” What is stuck is a helmet. That is why Savoyard has such a terrible guise. This fighter when dunking in the melt a little face poked and blew bubbles.
(Comment on the site)

To begin with, this material is ... anniversary! Exactly a year ago, my first material appeared on TOPWAR (17 February 2015 of the year), and today 250 is coming out! On the topic closest to me, that is, dedicated to the armor of knightly times. However, the topic (and most importantly the epigraph!) Was again suggested to me by the readers that they were writing their comments, and for that, thank you all very much! What to say: fun to read such comments. If it's true that five minutes of laughter prolongs life by half an hour, then I, at least, know three people who, having read the above comment, laughed so long that they probably earned themselves a few hours this way! But ... be that as it may, it’s really interesting, but how did people protect themselves from being hit by a sword, an ax, a mace? That is, what they came up with a "portable fortress" for the head, arms and legs. 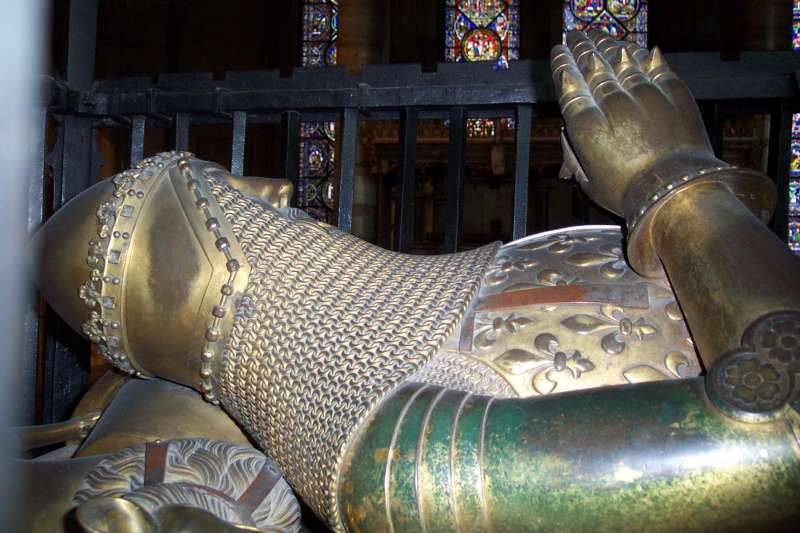 The famous effect of Edward "The Black Prince" from the Canterbury Cathedral, who died in 1376. It clearly shows that even such a noble and wealthy person had a chain mail barmitsu. The armor on the torso closes the short heraldic jupon or surco.

About helmets from boar tusks, bronze helmets of the ancient Celts, Greeks and Romans, there were already articles here, and whoever wants can easily find them. There were also articles on defense armaments of the late 16th – early and mid – 17th centuries. There was material about warriors from the “Bayesky carpet” (embroidery, as we now know), but the most interesting period came later, namely after the Hundred Years War, when gunsmiths realized its experience, and ... when the war in England began and white rose. 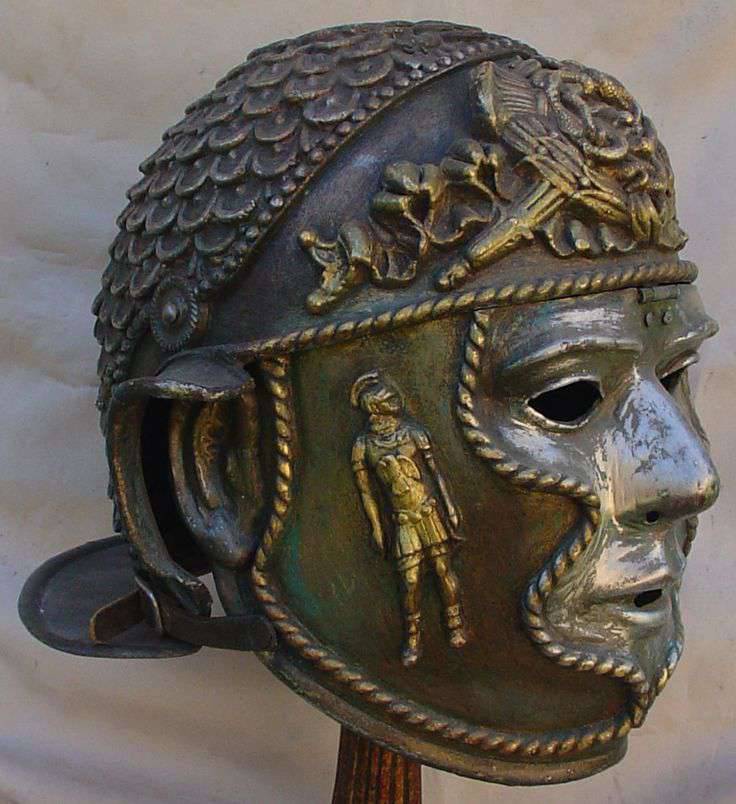 Roman helmet with face mask from the Royal Museum in Toronto, Canada. 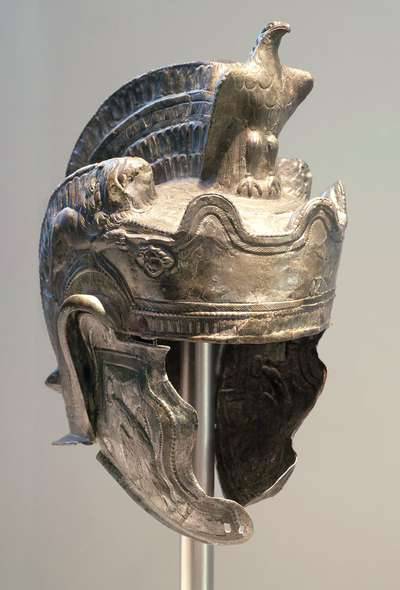 But this is also a Roman helmet - tasteless and artsy, which belonged to the horseman-officer of the sunset era of the empire. Viennese historical a museum. 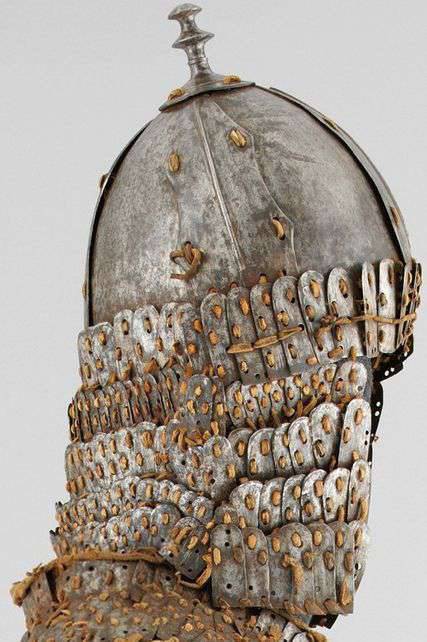 Tibetan helmet with barmitsa from the plates of the XVI - XVII centuries. Very similar to other Eurasian helmets, isn't it? Metropolitan Museum, New York.

Let's start with periodization. English historians (and whoever knows this, if not them!), Such as T. Richardson, D. Nicole, E. Oakeshott and many, many others, singled out three eras in the history of knightly armaments, replacing one another in turn. The first is the “era of chain mail”, which lasted from the XI century and somewhere until the middle of the XIII century, and began in the era of Charlemagne. Then it was replaced by the “armor” of the “transitional period” - the “transitional” from chain mail to all-forged armor - the “era of chain-plate armor”.

Classics of the era - the armor of the knights of the middle of the Hundred Years War and the Battle of Visby. After that came the “great period” in the history of armor. The chronological framework is as follows: 1410 - 1500's. But then already began their sunset! And although the armor was used in the battles of the Thirty Years War and the Civil War in England, it was already “not at all”! 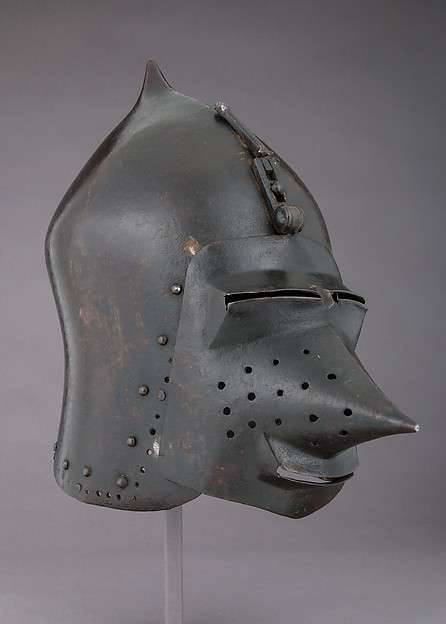 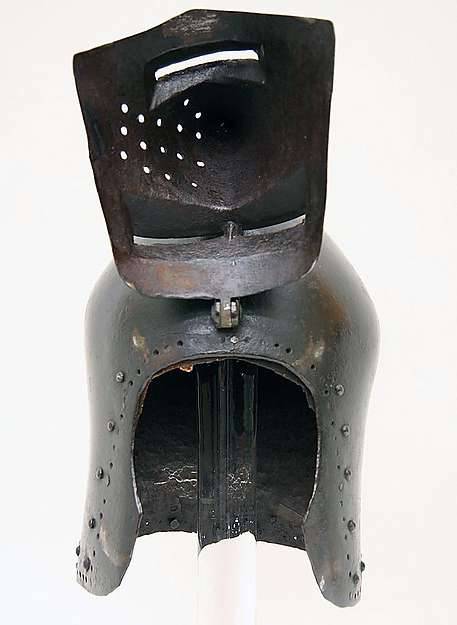 The same bascinet with a raised visor.

By the way, where did the 1410 date come from, why not 1400? And this is why: effigies (gravestone sculptures) are known, about which, by the way, there was also a large article, and bras (there will be an article about them) - engraved tomb stones on which knights of this time are depicted. And everyone in the armor has a characteristic detail: a chain mail barmitsa, descending on the shoulders from under the helmet. 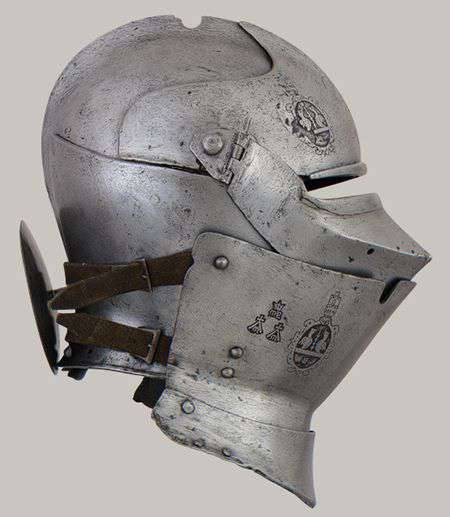 And only on the 1410 armor of the year there is none, but there is a flat plate warlock. That is, the armor became solid forged! By the way, it was this year that the English knight John de Firless, having decided to surpass everyone, ordered the full armor, sword and dagger decorated with ... diamonds and pearls to the Burgundian blacksmiths. A luxury unprecedented is not what was at this time, but later also paid them 1727 pounds for it!

To understand this a lot or a little, let's see that later 100 for years King of England Henry VIII ordered 2000 sets of light infantry armor (cuirass and morion helmet) in Florence at 16 shillings for armor, and in a pound at that time there were 20 shillings. Of course, it is necessary to take into account inflation, but it still turns out that with the money that this same Firless paid for his armor, it was possible to buy 2150 of such kits, but he was not the king and did not have royal income! 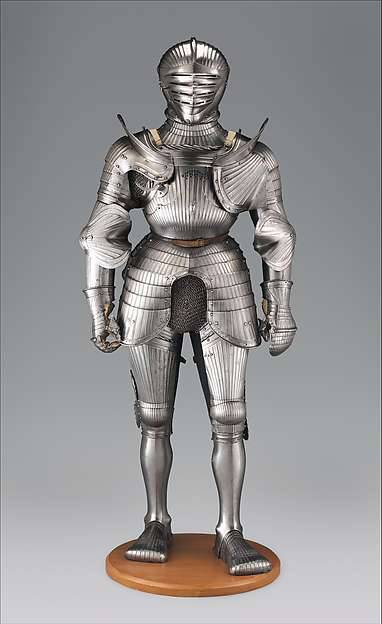 The more these armors were better than chain mail, besides holding the blow better, it was that she pressed the warrior on her shoulders, and the weight of these armor was evenly distributed throughout the body. D. Nicole refers to the medieval chronicles and emphasizes that the giants were not so worn that many knights had a fragile (!) Physique and elegant ankles, narrower than ours, but had developed muscles.

The armor of George Clifford (1558 – 1605), the third Earl of Cumberland and a favorite of Queen Elizabeth. Metropolitan Museum, New York.

Interestingly, the first armor cuirass, front and rear, consisted of two parts, connected by a belt - the top and bottom, that is, only four, and the top went under the bottom. Sometimes to arm more warriors, such cuirass was divided. One got the top, the other the bottom! And only in the XVI century. cuirass began to consist of two parts - chest and dorsal. 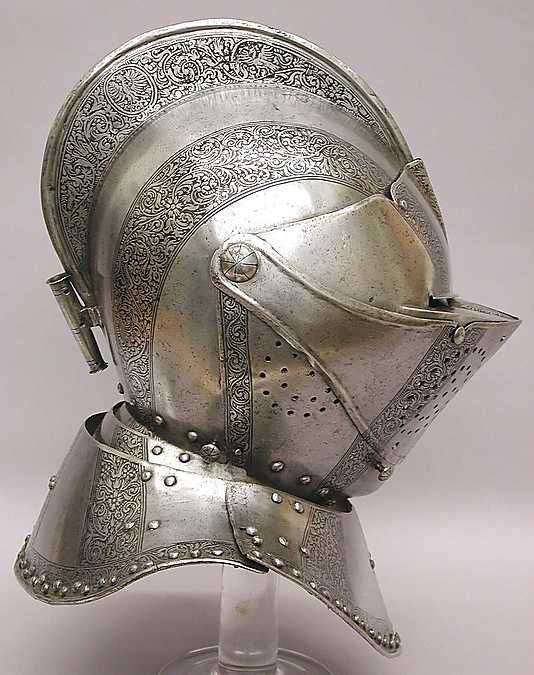 The German helmet and 1630 breastplate. The helmet weighs 3,65 kg, the breastplate and other parts of the armor are 18,825 kg. It is not by chance that the weight has increased for the sake of increasing the armor bullet resistance. Metropolitan Museum, New York.

The Italian armor was designed in such a way that the left half of the body was better defended, which is why the knights abandoned their shields, but the Germanic “Gothic” parts were more elongated and angular. Armor mixed became widespread: for example, in the painting of the Dutch artist Friedrich Herlin “St. George and the Dragon ”(1460) the knight is dressed in Italian armor, but he has a German helmet on his head. 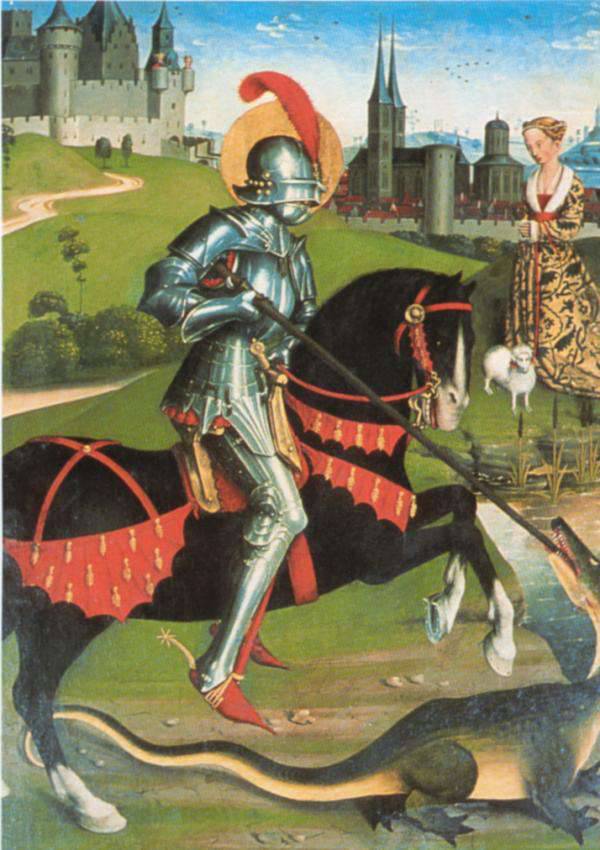 The reason for such a wide distribution of all-metal armor (they were also called "white" for the color of the polished metal) was ... the widespread use of throwing weapons. For example, it is precisely known that during the battle of Montleri in 1465, 38400 arrows were used in one day, and during the siege of Dinant that lasted one week, the Burgundians launched 27840 arrows and 1780 crossbow bolts! By the way, the decree of Henry VIII is known, forbidding his shooters to shoot at targets that are closer than 220 yards (that is, around 220 m). 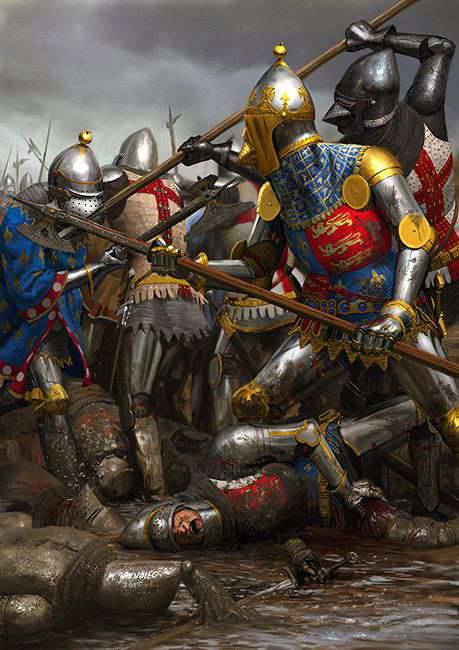 The legendary battle of the knights in Azenkur 1415. Painting by Milek Dzhakubika.

At the same time, already in 1482, the Milanese had in their arsenal 1250 various firearms, including X-NUMX arquebuses with a spring wick lock. And at the time of the death of Henry VIII himself in the arsenal of the Tower 352 bows and 3000 bundles of arrows were stored, and in each bundle of 13000 arrows! But there were also enough firearms. It numbered more than 24 units, although in England itself it was not produced at that time! 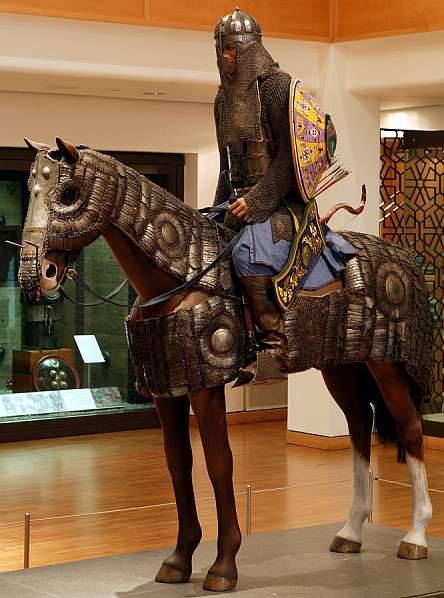 It is interesting that in the East the situation was approximately the same. But there the riders used a bow and therefore the helmets were always open, the back of the saddle bow was flat, and the arms were usually protected by chain mail, not by armor. However, in Europe - sunset - sunset, but it was the first half of the 16th century that became the “golden age” for European gunsmiths, as the demand for armor increased in these conditions. By the way, the fashion for the so-called "Maximilian armor" (with grooves) very quickly passed and already in 1530, the armor became smooth again, although the edges of the plates became fashionable to trim with a narrow brass border. 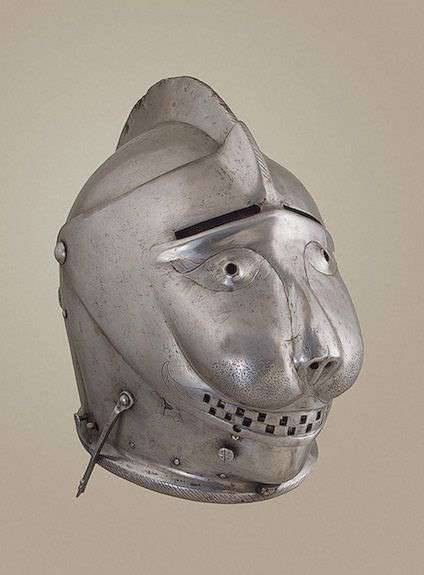 There were "grotesque helmets" with monstrous faces on the visors, although classic helmets continued to be used. In 1614, in Greenwich, for Prince Henry of Wales, armor worth 340 pounds was made. Even more expensive were the armor donated by the city of Brescia to the French king Louis XIV, but he was unlikely to ever wear them. Not to mention the fact that the wearing of full knight armor, King Henry IV, banned even in 1604 year!

Japanese helmet to ashigaru (and wealthy daimyo!) Jingasa, XVIII century. It is very similar to the English helmet - “the shaving bowl” of two world wars at once. Photo presented by the company "Antiques of Japan" (http://antikvariat-japan.ru/).

And, actually, the story of the knight’s armor ended there, and then ... then they were worn by mercenaries, not knights, and legs below the knees, and then they didn’t close their hands. The torso and head remained the most valuable, which the French cuirassier cavalry covered with metal even in 1914. But it was a ridiculous tribute to tradition, not more. Helmets and cuirasses used at the same time turned out to be the same relapse, but they didn’t become so massive at the time.

Ctrl Enter
Noticed oshЫbku Highlight text and press. Ctrl + Enter
We are
American helmets of the Second World WarSteel helmet Thale-Harz (Germany)
31 comment
Information
Dear reader, to leave comments on the publication, you must to register.