Tu-160 bomber can transform into a fighter 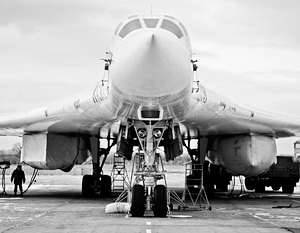 The Ministry of Defense has decided to resume production of the White Swan bomber Tu-160 in a modernized version. Does this decision reflect Russia's inability to create a modern bomber "from scratch" - or does the machine, which was developed almost 40 years ago, really be capable of solving the combat tasks of the future?


Deputy Defense Minister Yury Borisov called the Tu-160М2 "a fundamentally new aircraft." Of course, to characterize the car that was developed in 1970-s, and made its first flight 34 a year ago, is possible only with a certain stretch. One of the main qualities of a modern bomber is its radar stealth, which by definition cannot acquire, for it is basically the same platform that has been in service with the Soviet and Russian air forces for almost 30 years. But, as we know from the experience of operating the American B-52 and the Russian Tu-95 (both have been serving 60 for years, and we are not talking about writing off them yet), it’s good, even if the old platform can be the carrier of modern “smart” weapons.

Borisov also said that the Tu-160М2 will be “2,5 times superior in efficiency to its predecessor”. Any details of this “increased efficiency” were not announced, which is quite natural: the features of the updated strategic rocket carrier are a secret sealed off. Therefore, let us try to guess what the novelty of the Tu-160М2 will be based on the tasks that it will have to solve in the foreseeable future.
There is work to do

It is unlikely that the planned innovations are designed to increase the capabilities of the machine as a bomber to break through air defense, that is, one that will have to solve tasks in the airspace of a potential enemy. The absence of radar stealth makes it an easy target for the air defense systems of NATO member countries, and if it comes to bombing targets like ISIS, then this kind of stealth is not needed.

By the way, modern technology "stealth", which is used on American aircraft - the bomber B-2, as well as the fighter F-22 and F-35, can "deceive" the detection systems of air targets that are in their technical excellence only somewhere at the level of 1980 – 1990-s. Therefore, these machines can most effectively use their stealth qualities only in conflicts with countries such as Iran, North Korea and, possibly, China.

Thus, if we talk about enhancing the capabilities of the Tu-160 precisely as a strategic bomber, then it is logical to assume that a more “intelligent” and invulnerable rocket weapon capable of hitting targets from a greater distance, beyond the limits of the air defense of the countries of the North Atlantic Alliance, is on board .

However, as evidenced by the experience of local wars over the past half century, strategic bombers can very well cope with the solution of tactical tasks. This was demonstrated during conflicts in Indochina and the Middle East by the American B-52 and the closest senior relative of the Tu-160 - the bomber with the variable geometry of the wing B-1, which, according to the American Internet resource Stars and Stripes, showed in Afghanistan and Iraq its "great qualities as an aircraft directly supporting ground forces."

As you know, the "White Swan" is used during the fighting in Syria. According to the data of the Ministry of Defense of the Russian Federation distributed in the media, strikes were delivered by cruise missiles. However, the use of these weapons against targets such as ISIS can sometimes fall under the well-known formula "from a cannon on a sparrow." The American B-1, for example, is used as a classic “bomber”, throwing free-falling from above (even if equipped with GPS receivers for more accurate hitting) bombs. Therefore, it is possible that the Tu-160М2 will enhance the qualities of a traditional, non-nuclear bomber, which at the same time will allow it, like B-1, to act as an aircraft directly supporting ground forces.
Tu-160 began to be more actively used in the implementation of air patrols along the borders of NATO member countries, including the United States. However, the solution of this problem is associated with certain difficulties. According to Peter Deinekin, the former commander-in-chief of the Air Force, “the flight to the USA is ten hours, but even with two refueling in the air, the car can be just one and a half hours in close proximity to the coast of America.” Therefore, an increase in the duration and range of the flight can be expected from the Tu-160М2.

Probably, the reconnaissance functions of the Tu-160 will be enhanced. This is indicated by the plans to install a new avionics equipment on it. Finally, the White Swan will need to defend itself against stealth fighters, which is impossible without their timely detection. Apparently, this task will also be solved with the help of the new avionics.

The size, power, payload, speed and altitude of modern bomber can solve, at first glance, completely uncharacteristic problems. For example, act as a fighter. This function was tried on by bombers as early as the Second World War. In the USSR, there was a heavy Pe-3 fighter - a modification of the famous Pe-2 dive bomber, and in Germany at night fighters made on the basis of the Ju-88 and Do-217 medium bomber flew into the air. After the end of the war the bombers did not have to perform as fighters anymore. And it is difficult to imagine that in modern times, when multi-purpose, long-range and heavy fighters are in service with many countries of the world, bombers will again have to take on the unusual function of destroying air targets.

Meanwhile, according to the Pentagon, the United States lacks hundreds of fighters to solve the military tasks currently facing the army. And the situation is not getting any easier. According to the Internet resource Defensenews.com, a couple of days ago, the Air Force Command decided to postpone the purchase of X-NUMX F-45 fighter jets for five years in order to have funds to purchase other equipment.

The Pentagon has offered an unexpected way out of the situation in the form of an “arsenal plane”. This project, according to the internet resource Thedailybeast.com, was announced on February 2 by US Secretary of Defense Ashton Carter. It consists in the following. F-35 and F-22 fighter jets are in direct contact with enemy fighters. In order not to violate their “stealth” properties, they are forced to abandon the air-to-air missiles on external hangers, having placed them only inside the fuselage, which seriously limits their ammunition. Thus, the problem of the lack of fighters is aggravated by their insufficient armament. But behind the safe distance go heavy bombers, loaded with hundreds of air-to-air missiles. Fighters find targets, put them in the “memory” of these missiles, and then use their radio signals to launch them from these “arsenal planes”. The only difference is that the missiles are sent to the flight from the sides of not fighters, but bombers.
According to the representative of the Pentagon, he said in an interview with the Aviationweek.com Internet resource, B-52 and B-1 are considered as such "arsenal planes". It is curious that the creators of the White Swan did not exclude the possibility of using it as a heavy escort fighter armed with air-to-air missiles of large and medium range. The modification was called Tu-160P.

As already noted, the Tu-160 platform lacks only one important quality in modern combat conditions - stealth, radar invisibility. However, if we exclude its use as a bomber for an air defense breakthrough of NATO member countries, then this platform, according to indicators such as speed, range and altitude, as well as payload, has the ability to install modified equipment and weapons on it to solve various modern tactical and strategic objectives.

Ctrl Enter
Noticed oshЫbku Highlight text and press. Ctrl + Enter
We are
List of destroyed the largest and most high-tech enterprisesThe mystery of the death of General Swan
170 comments
Information
Dear reader, to leave comments on the publication, you must to register.