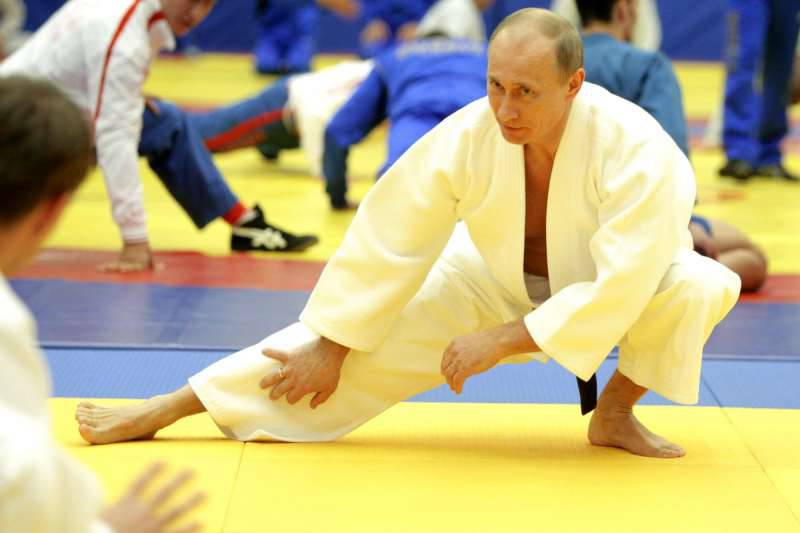 Air strikes continue in Syria, and the Russian president managed to become a key player, shedding light on the inconsistency of the West

Most media regularly blame Russia for making the “rebels” priority goals, not IS, and indiscriminately targeting militants and civilians. In the evening issue News on France2 on February 4 showed a report on the surgical accuracy of the attacks of the international coalition against the IS ... only these shots turned out to be shots of Russian bombing, which had previously been published on the website of the country's Ministry of Defense. Although this mistake seems anecdotal, it sheds light on misconceptions in the strategy of the West in the Middle East, which today is becoming a hostage to the dangerous alliance of Turkey’s increasingly pronounced Islamism Erdogan with the Gulf powers. The double game of the latter is now on public display, pressing the West against the wall.

As an experienced judoist, Vladimir Putin prefers to use the weaknesses of his opponents to achieve the goal with the least expenditure of energy. Having enlisted Iran’s military aid and China’s diplomatic support, the Russian president is trying to preserve the regime of Bashar al-Assad so that he becomes the de facto last stronghold against the Islamic state. But that's not all. In the face of confrontation between the Turks and the Kurds (both are sworn enemies of each other, but at the same time allies of the West), Vladimir Putin makes the peshmerga, weary of this state of affairs, turn to Moscow. Like in Ukraine, Vladimir Putin is an excellent tactician who relies on strong and cautious military alliances to strengthen positions in international negotiations. He is not even afraid to, in fact, cross them out, if he reads that he can achieve more, which is perfectly illustrated by the current meeting in Geneva. At the same time, Putin’s strategy is defensive in the face of American policy toward Moscow, which has only become tougher since 1991.

Make of Assad's bulwark against the IG

The ongoing battle for Aleppo, of course, is a turning point in the Syrian crisis, as well as an illustration of the Russian approach to intervention and negotiations. Despite 5 Russian hits aviation over the last four months of last year, in the west, until recently, this operation was considered ineffective. So, on November 19, Jane's Terrorism & Insurgency noted, not without irony, that the Bashar al-Assad regime had regained only 0,4% of the country's territory since the beginning of Russian intervention.

Anyway, the situation, apparently, has changed dramatically over the past month, and since last week the course of events has gathered a dizzying turn. So, from 1 to 3 February, Russian bombers set a record for 875 strikes for 237 sorties. The strikes were concentrated in the territory from the city of Aleppo to the Turkish border so as to block the supply channels created by Ankara, weapons, money and oil. The Syrian army of Bashar al-Assad, with the support of Iranian forces, as well as Shiite troops from Lebanon, Iraq and Afghanistan, was able to encircle Aleppo from the north, thereby finally blocking one of the roads that provided the connection between the rebels and Turkey. For them, Aleppo becomes a “boiler” from which it is impossible to escape.

The polemologist Karolin Galakteros rightly notes the surprising similarity between the “cauldrons” in Aleppo and Debaltseve, where the Ukrainian army was a year ago: the “Second cauldron” is formed in Syria in an almost identical sequence (military successes to put pressure on partners before political negotiations). Russian tactics are painfully reminiscent of the one that was used in Ukraine. ” Only negotiations are now taking place not in Minsk, but in Geneva. Against the backdrop of a dramatic change in the balance of military forces in Syria, UN Special Representative Secretary General Staffan de Mistura had no choice but to postpone the negotiations for the end of February, which were scheduled for January 31. Russia and the Syrian regime intend to use all their weight in the negotiations in order to force the Sunni powers and the West to adopt a new state of affairs. For Ankara, Riyadh and Washington such a move of Moscow has become a real slap in the face.

After all, what can Western countries do? Expand aid to rebels supported by Turkey, Saudi Arabia and Qatar? At a minimum, this would mean a too serious political risk, because (again) would show the public that there are no “moderate” rebels, and that only Islamist groups are fighting the regime under the leadership of Jabhat al-Nusra, that is, the local Al Qaeda. As a maximum, this would be fraught with the risk of direct intervention by Turkey (in Russia there are suspicions on this score) or Saudi Arabia (she has already spoken of her readiness to send ground troops as part of an international coalition). In this perspective, an escalation is not excluded: the indirect conflict of Sunni and Shiite powers that is currently being waged in Syria, Iraq and Yemen could have crossed the dangerous red line.

The Kurds in the Russian orbit

Vladimir Putin is increasingly based not only on Damascus, and the Syrian Kurds, supplying them with weapons, including RPG-7. His interest in the Kurds there are just two reasons.

First of all, the Kurds enjoy Damascus to Aleppo operations for its own offensive against rebel positions. They tend to move to the east to form a united Kurdish zone from Afrin to Cobán (this city has become famous during the siege of the Islamic State), which borders with Iraqi Kurdistan.

Further, Russian weapons allow the Kurds to quietly but actively support the Kurdistan Workers' Party in Turkey, which allows Moscow to exert direct pressure on Ankara. The Kurdish map gives Vladimir Putin the opportunity to create a kind of layer between the Assad and Erdogan regimes, as well as to emphasize the contradictory position of the Western states, and above all the United States, who have such evil enemies as Turks and Kurds in their allies. Their rivalry complicates the formation of the Syrian opposition at the Geneva talks, because Ankara is categorically against the Kurds' presence on them. But how can you not let them go to the negotiating table, if they, unlike Turkey, are heroically fighting the Islamic state? The US and Europe are literally paralyzed by the inconsistency of their game of alliances.

Moscow puts the "red lines" in front of Washington

The tactical victory of Vladimir Putin in Syria (based on the Ukrainian experience) is all the more impressive because Russia is now weakened by the economic crisis. And although the president expected to restore growth after 2015, a further drop in oil prices does not bode well. Despite the often sounding statements, the share of hydrocarbons in Russia's GDP is not that high (10-15%). At the same time, they play a big role in the formation of the budget (40%). Thus, Putin was forced to cut government spending, which is becoming a heavy blow to domestic demand, which is a traditional trump card for Russia. The country relied on rich energy resources for a long time, but now it faces difficulties in financing the economy, which further exacerbates Western financial sanctions. While maintaining low oil prices and the absence of structural reforms (primarily in the banking system), Vladimir Putin's regime will have to forget about high growth rates.

Further, although the operation in Syria is that the costs do not seem unfeasible for Moscow, this does not negate the issue of future intervention and long-term prospects of Russia in the Middle East. Vladimir Putin is peculiar to ultra-realistic vision of international relations, but it is the same whether it is a good strategy as well as tactics? This is the question put before a Western observers after the Ukrainian events, noting that with the help of clever maneuvers, he eventually acquired Crimea, but finally lost to Ukraine.

In Putin's strategy, the Syrian conflict can be viewed as a direct continuation of the Ukrainian one. Moscow wants to draw the "red lines" that the US (and NATO) are not allowed to overstep. In this regard, Vladimir Putin is mostly in defensive positions, which is costly for Moscow in the long run regarding military spending. Incidentally, this may be the strategy of Washington: to weaken Russia by an arms race, which it cannot afford. In the past, it has already undermined the strength of the USSR.

Unfortunately, the Americans, in spite of the end of the Cold War, did not move away from the doctrine of "deterrence", which was formed in 1947 by President Truman and was inspired by the works of historian and political scientist George Kennan. Despite the peaceful collapse of the USSR, the Americans were pushing the borders of NATO to the Russian borders without end, although there was no Warsaw Pact for a long time.

Such an eagerness to continue the Cold War was recently analyzed by the American historian Stephen Cohen. In the opinion of this proponent of detente between the two blocs, “America’s national security must rest on Moscow. This means that the US president needs a partner in the Kremlin. This was true in the Soviet Union and remains to this day. ” Cohen does not hide his pessimism: Americans in dangerous arrogance do not recognize the Russians the right to draw the "red lines", although in Soviet times, these lines existed. The historian cites three examples of this US position: NATO expansion, unwillingness to negotiate a European missile defense (and it threatens the balance of nuclear deterrence), the use of "soft power" for "regime change" in Russia and neighboring states.

Vladimir Putin's strategy in Syria can be considered as part of the American deterrent. US stubbornly refuse to notice that the Berlin Wall collapsed long ago. In addition, the new walls may appear today, only this time not in Berlin but in Tbilisi, Kiev and Damascus. Adhering to a defensive position, building on the outstanding tactical talent, the Russian president seeks to draw a red line in Syria, where the only naval base abroad in Moscow, necessary for sustainable presence in the Mediterranean region.

Europe and first of all France need to say “no” to this reincarnation of the Soviet-American confrontation and remind Moscow and Washington that “Russia is a European power,” according to Didrot. But this would require a lot of “valor”, as our future foreign minister said.

Ctrl Enter
Noticed oshЫbku Highlight text and press. Ctrl + Enter
We are
"Non-Arab Emirates": migrants in the Gulf countriesReport from TsNIITOCHMASH. Part I. Weapons and ammunition
66 comments
Information
Dear reader, to leave comments on the publication, you must to register.