Opinion about the Battle of Aleppo: rebuke to America and the whole world (The Guardian, Great Britain) 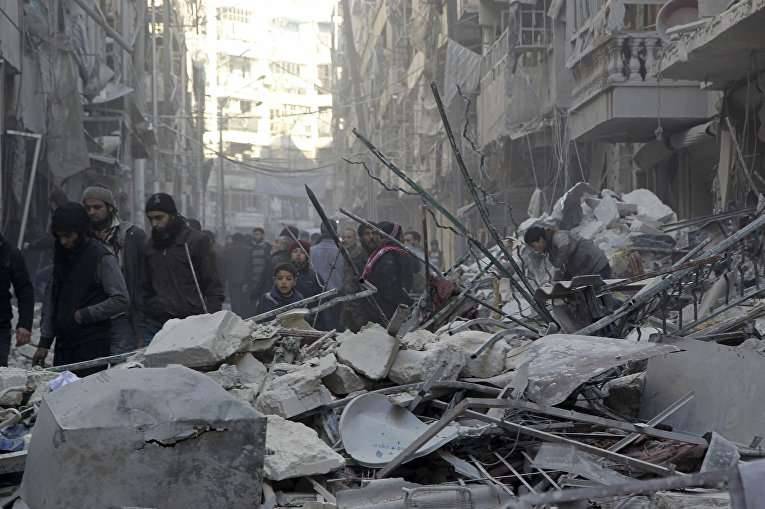 Intense bombing in front of the whole world put the largest city of Syria on the brink of a humanitarian catastrophe. The situation resembles the siege of Sarajevo 20 years ago.

John Kerry doesn't give up so easily. On Tuesday, in Munich, the US Secretary of State will insist on new diplomatic efforts aimed at holding Syrian peace talks. But, despite his determination, the real situation on the ground not only does not contribute to a change, but also raises ever more serious doubts about the coherence and validity of the American and Western strategies. For more than a week, the Russian Air Force has been bombing Aleppo, the rebel-held rebel leader, once the largest city in Syria, supporting the militias receiving assistance from Iran and Syrian government forces. If this strategy of a war of extermination continues, the balance of power in the Syrian civil war will change fundamentally. The negotiated solution proposed by Kerry will be untenable and will lose its power, since in Syria there will no longer be an opposition that can be represented at the negotiating table.

In fact, a humanitarian disaster in and around Aleppo should force the world to rethink the situation. In the winter cold, tens of thousands of Syrian citizens are already on the Turkish border. According to the United Nations, Aleppo, which is currently falling barrel bombs, can still 300 escape thousands of residents. It seems to these people that they know what fate awaits them if Syrian government troops take the city. In a recent UN report, the methods of torture that the Assad regime uses are called mass extermination. The city of Aleppo, which became a symbol of the uprising against the 2011 regime of the year, and in 2012, a stronghold of opposition forces, is threatened with encirclement, famine and mass slaughter.

The outcome of the Russian intervention in Syria, which lasts four months, could be a turning point in this war. But it will bring even more human suffering, which will ultimately be in the hands of the so-called "Islamic State." The very groupings that drove ISIS from Aleppo in 2013 and 2014 were today the target of the attack.

In just one week, the situation in Syria has grown from bad to terrifying. Kerry is well aware of this and is desperate to insist on negotiation. But this does not hide the gloomy circumstance that the Obama administration today sees the complete failure of its strategy. Those rebels, allegedly supported by the United States, and their allies need anti-tank and anti-aircraft weapons, but nothing says that they will receive them. If nothing changes, their defeat will become only a matter of time.

Probably, at this critical moment of conflict it is no longer possible to restore order in American politics. But it is imperative that Washington publicly report for its mistakes. The “red lines” in Syria appeared and disappeared, and the result was colossal human sacrifices. And Moscow proved that it is much more consistent and persistent in its support of the Assad regime, and that the West and its allies are significantly inferior to the support of the opposition. It is also not clear what Kerry meant when he said this week that the US has other “leverage” in case diplomacy fails. According to available information, Russia has proposed to stop the March 1 bombing. But this cynical offer leaves her three weeks to seize Aleppo and achieve her goals.

The harsh reality is that the United States has very few options left because of Russia's military intervention. Because of this intervention, all the talk about creating a “no-fly zone” provided by the West in the north of Syria, which should protect civilians and insurgents, has lost all meaning. This could have been done at earlier stages of the war, but now such measures will create a risk of a more extensive military confrontation with Russia, which for obvious reasons the Obama administration cannot allow. What is happening today in Aleppo will soon be reminiscent of the siege of Sarajevo in the 1990s - but this time there’s no help waiting, and the result will be a growing refugee crisis, including in Europe. It is a symbol of the Western failure in Syria. Aleppo has already become a stain on the conscience of the UN. Now this city has turned into a stain on the reputation of the American administration, no matter how well-intentioned it may seem.

Ctrl Enter
Noticed oshЫbku Highlight text and press. Ctrl + Enter
We are
The fall of the Syrian airbase Abu ad-Duhor. The longest siege of the civil war is over"Pathological liar" from the State Department
129 comments
Information
Dear reader, to leave comments on the publication, you must to register.