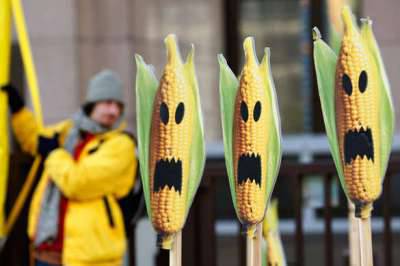 January 25 on the Rosselkhoznadzor website appeared "Appeal to the American side on the issue of compliance with Russian phytosanitary requirements for the supply of corn." The Office expressed its dissatisfaction with the fact of the delivery of corn infected with diplodioz from the USA to Russia. It was noted that the supply of infected maize is “systemic”. Later, the leadership of the Rosselkhoznadzor announced the introduction of a ban on importing corn and soybeans from the USA into the Russian Federation from 15 in February due to non-compliance with phytosanitary requirements.


25th of January 2016 on the Rosselkhoznadzor website The Appeal to the American Side on Compliance with Russian Phytosanitary Requirements for Corn Supplies was published. Quote:

“Rosselkhoznadzor is concerned about the fact of maize contaminated from the United States of America to Russia, which is infected with an absent, quarantine object for Russia with diplodiose maize (Stenocarpella maydis (Berkeley) Sutton (Diplodia maydis (Berkeley) Saccarddo).

Deliveries of contaminated corn from America to Russia are systemic. ”

Further, the text listed cases of detection of "specified object", which is considered the source of infection.

In the 2015 year, the agency reports, the object was identified in the 71 case for shipments from America. In two other cases, Argentina was to blame, and in one case the French overlooked.

The analysis carried out by the Rosselkhoznadzor and the All-Russian Center for Plant Quarantine Federal State Budgetary Institution showed that the maximum risk from import is represented by American corn. Moreover, the potential economic losses from the importation and acclimatization of “objects” in Russia will be from 10 to 15 billion rubles. annually.

History with infected American corn got a continuation of February 9.

Rosselkhoznadzor reserves the right to ban the supply of corn and soybeans from the United States, reported RIA News" Assistant to the Head of the Rosselkhoznadzor Alexey Alekseenko.

“We asked the US side to provide an official written explanation of the continuing supply of infected corn and soybeans to Russia. We reserve the right to impose temporary restrictions on their importation, ”the agency Alekseenko quotes.

And it is not surprising: after all, American corn found diplodioz - one of the most dangerous diseases. In addition, in American soybeans, experts have discovered the seeds of other plants.

The point in the corn-bean business was raised by 10 February.

As reported that day Interfax, Russia 15 February introduces a ban on the import of corn and soybeans from the United States due to non-compliance with the phytosanitary requirements of the Russian Federation.

“After the negotiations with American specialists on Tuesday evening, the head of the Rosselkhoznadzor, Sergey Dankvert, held a meeting on Wednesday morning, which was tasked with preparing documents banning the supply of corn and soybeans from February 15,” Alexei Alekseenko, the Rosselkhoznadzor representative, told the agency.

“Since the products supplied from the United States represent a real danger to the Russian Federation, and the US guarantees are invalid, we reserve the right to impose temporary restrictions on the import of American corn and soybeans,” Alekseenko said earlier to Interfax.

According to him, experts from the United States informed the agency that they (the Americans) are conducting organoleptic evaluation of corn without checking its phytosanitary condition.

“This caused bewilderment to us, as a phytosanitary certificate is issued for each batch of products supplied, which guarantees its safety,” Alekseenko noted.

It is also reported that in batches of soybeans from the US, the Rosselkhoznadzor in 2015 in the 64 cases found beans infected with seven types of objects quarantine for Russia. In January, 2016, in four cases - four types. Claims to corn, as mentioned above, were associated with the supply of products infected with diplodiozom.

According to the official representative of the Rosselkhoznadzor, Yulia Trofimova, the corn imported from the United States into the Russian Federation is intended for the production of popcorn, and the pathogen of diplodioza does not pose any danger to humans, since heat treatment destroys its carrier. However, the Rosselkhoznadzor fears that in some regions of Russia this grain may be sown, and this already carries the danger of contaminating the fields. Field farmers burn plants with diplodioz, and the land then needs to be deeply plowed. However, the pathogen can be stored in the soil for two or three years, and the land is taken out of crop rotation at this time.

The ban on the import of corn and soybeans - perpetual, explained Reedus representative office. It will be removed only when the USDA performs “work on the mistakes.”

It is also noted that Russia itself exports corn, since the year 2013. That year, Russia harvested its record harvest - 10,7 million tons.

So, we add, the Russian authorities are torturing their own citizens. Indignant human rights activists in the West are probably already preparing to carry out a propaganda campaign in the media devoted to infringement of the rights of popcorn consumers, that is, those citizens who actively attend cinemas (where, by the way, Hollywood film production is often shown).

Undoubtedly, the rights of American farmers, these unfortunate laborers, whose maize and beans have been declared “infected” and forbidden, have been violated. If earlier the Poles with their apples suffered from the oppression of the Russian sanitary departments, now distributors of diplodioz... sorry, suppliers of corn.

However, all this, of course, is pure coincidence. There are no counter-sanctions, as in the well-known case with the Poles, we are not talking. Just "exceptional" faulty.

Here before, it happened, commodity sanctions were indeed introduced. For example, against Turkey.

1th of January 2016 instilled by virtue of the government ban on the import into the Russian Federation of Turkish poultry meat, fruit, as well as cloves (these are flowers) and even onions and salt.

Previously inherited from the Russian government and Ukraine.

21 December 2015 was banned from importing Russian agricultural products, raw materials and food into Russia. The ban found 1 valid on January 2016.

"Since 1 January 2016, a ban has been imposed on the import into Russia of agricultural products, raw materials and foodstuffs, the country of origin of which is Ukraine", - quotes the explanatory note to the document TASS. The government also noted that "the decision was made to spread special economic response measures against Ukraine."

As for the ban for the United States, then there is no sanction or counter-sanction at all. This measure is much more painful: Russia around the world shows that Americans are dishonest suppliers.

Observed and commented on Oleg Chuvakin
- especially for topwar.ru
Ctrl Enter
Noticed oshЫbku Highlight text and press. Ctrl + Enter
We are
Rosselkhoznadzor and Belarusian Salmon“Meat Wars”: trade nuances or big politics
49 comments
Information
Dear reader, to leave comments on the publication, you must to register.