You can not book a modern ship 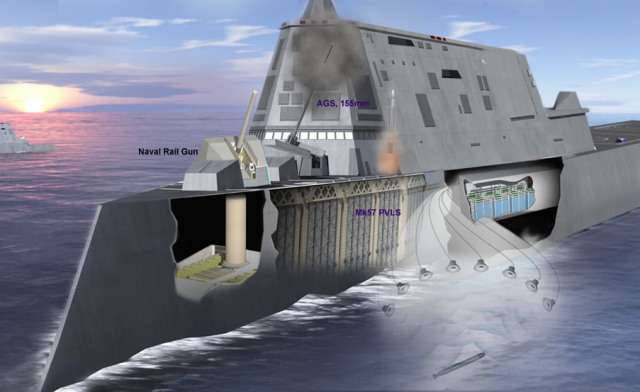 Published articles on ship's armor are written by non-specialists who are not familiar with the concept of metacentric height, stability, and center of gravity of a ship. As a result, all conclusions are far from reality. Hang up thousands of tons of armor and sail. Kiel up.

Argue that bronepoyas withstand rocket hit. All those who say so do not understand that the ancient ships of Bronepoyas were in the form of a narrow “strip” along the waterline. If you raise it higher - the ship will immediately overturn. Therefore, to protect the entire board is impossible. Impossible!

The armor belt with a thickness of 100 mm and a height of 5 meters with a hundred-meter length of the citadel would weigh almost 400 tons! And this is only from one side. Armor lovers believe that armor plates are hanging in the air. And it is not. An armored ship will require a more durable, and hence a heavy power set: stringers and frames. The result will be a behemoth the size of a battleship. Moving such a carcass off the ground is still a problem, the battleship will need atomic power plants of enormous power.

Once the French built such a ship, with the complete protection of the board, and called it “Dupuy de Lom”. Despite the attempts of the mountain shipbuilders, this “de Lom” barely crawled under its own weight. Three steam engines could not even provide an 20-junction, the cruiser showed all 19,7 ties on the measured mile. How far could he go?

Its entire board, from the underwater part to the upper deck, was protected by 100-mm armor, which was mounted on top of a double skin with a thickness of 20 mm. Whatever the “Dupuis de Lom” overturned, its armor was made of special steel of low density, the recipe of which has now been lost, aha-ahaha ...

May the reader forgive me for such a beginning. But, you see, the joke is funny.

Despite the protests of modern specialists, история knows a lot of examples of highly protected warships. Whose armored all over the board combined perfectly with adequate size, powerful armament and high speed. A simple example is the Russian “Ishmael”.

But the most interesting is “Dupuis de Lom”. The French armored cruiser of the end of the 19th century, whose constructive “finds” could be useful in the creation of modern ships.

As you may have guessed, everything that is written in the beginning of the article is a lie. The Dupuis de Lom was one of the fastest cruisers of its era. Even faster than the Aurora built a decade later.

But the main feature of “de Loma” was its phenomenal, even for that era, security. ALL BOARD - from the stem to the stern, from the underwater part to the upper deck was covered with 100-mm armor plates, under which was thick (twice thicker than modern ships) sheathing of soft structural steel. 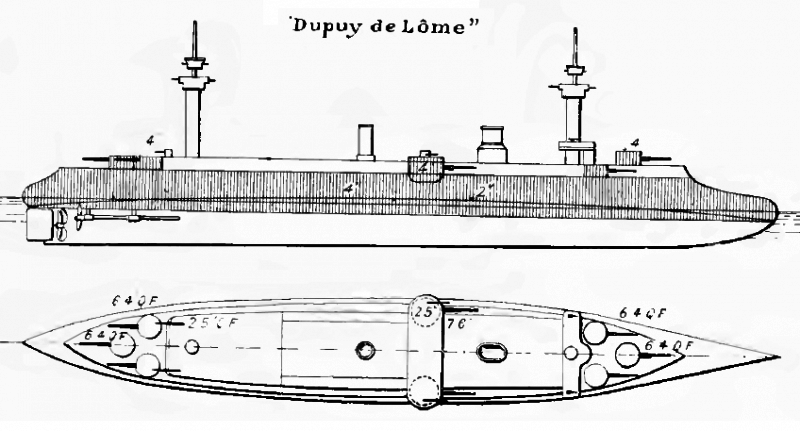 The fantastic appearance of the cruiser was supplemented with a sloping back with a bow and two massive battle towers of the superstructure. The shape of the stem was dictated not by the requirements of the “stealth” technology, but by the commonplace desire to reduce the mass of the bow, while eliminating the risk of damage to the deck with powder gases when firing the bow tower of the Ledger. The feed had a similar form.

The main problem of the “Dupuis de Loma” was not the armor, but the technological level of 1888 of the year when this first-class ship was laid.

13 boilers and three steam engines hardly produced the entire 13 ths. Hp For comparison: the typical destroyer of our time has on the shafts to 100 000 hp

If, as an experiment, to throw out rusty junk and equip “de Lom” with high-performance diesel engines and gas turbines with a modern electric transmission, then he would probably have overcome the line in the 30 nodes.

For similar reasons, the cruiser had poor seaworthiness and suffered from inadequate stability. He swayed heavily in the storm, unpleasantly lurched around the bends and reluctantly returned to an even keel. Alas, its creators did not know about active stabilizers pitching. In 1897, they guessed to equip the cruiser with the zygomatic keels, which markedly improved its stability. But due to a too weak powerplant, the “de Loma” speed dropped to 18 knots.

The next drawback was the defects of armor plates. However, these are problems of shipbuilders of the XIX century. 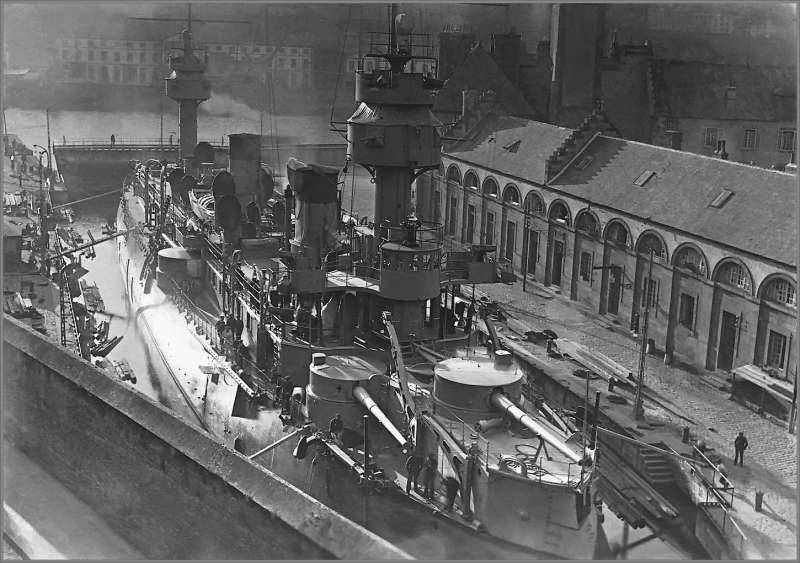 “Dupuis de Lom” was the pride of the French fleetIt was actively used for diplomatic purposes, demonstrating the technological power and capabilities of France. I visited Germany, Spain, and Russia. Unfortunately, the service life of ships of the armor and steam era was short-lived. A decade later, “de Lom” is outdated and, due to the rapid deterioration of the mechanisms, was put into reserve.

Remaining the only ship of its project, “de Lom” turned out to be excessively steep, roads and roads for its tasks. Still, at the end of the XIX century power plant power 13 ths hp and the eight turrets with 194 and 164 mm caliber guns seemed inconceivable to a cruiser class ship.

The main thing that interests us in this story: French engineers on antediluvian technologies of the XIX century. managed to build a ship with a solid side protection, having packed in 6700 tonnes of displacement. For all its incredible security, the “de Lom” cruiser was 1,5 times less destroyer! If such a ship were in modern combat, it would be completely invulnerable to modern missiles and air attack weapons.

Now will begin objections about the lack of horizontal protection. The only 30-mm armor deck “de Loma” was held deep in the hull, below the level of the overhead line.

The creators of the cruiser simply did not see the special need to install an armored deck system. Do not forget that they had their own “smut” with the placement of eight gun turrets (two of which had 200 mm walls). In contrast to modern compact DPS, these multi-ton designs rose above the upper deck, worsening the already unimportant stability.

Problems with a set of body could be solved in an obvious way: the inclusion of armor elements in the power set of the body, like the armored capsule of the legendary IL-2. Saving weight on frames and cladding - hundreds and even thousands of tons. The complexity of the work is compensated by the power of modern technology. By the way, this technique was successfully used by the Japanese in the construction of their cruisers in the 1920s, who did not know about modern composites, CAD software packages, plasma cutting, promising welding methods and industrial installations that allow steel sheets to bend at any angle, forming double surfaces curvature.

The cruiser “Dupuis de Lom” is fully consistent with the concept of the shape of a highly secure warship of the 21st century. The armored “box” swinging on the waves, which wanted to sneeze on falling into it the debris of downed rockets, all sorts of planning bombs, “Harpoons”, “Exosets” and Chinese fakes that bred around the world in quantities that number in tens of thousands. 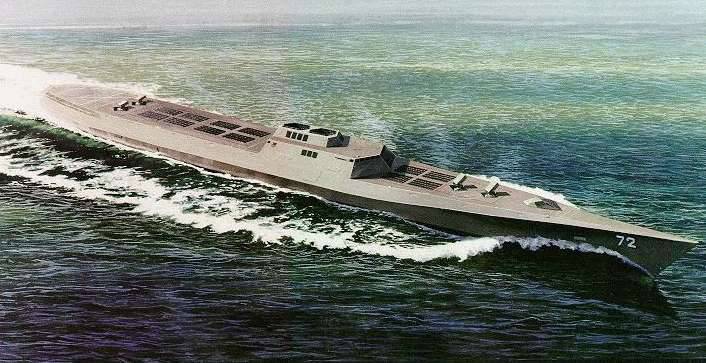 On the upper deck only protected watertight covers of missile silos and two to four anti-aircraft complexes of the near defense (“Dirk” / “Phalanx”).

The only noticeable detail is the squat tower of the superstructure, with flat antennas placed on its walls, made according to the PAR technology.

A modern ship is capable of performing most tasks without radar. All “Harpoons” and “Calibres” are induced EXCLUSIVELY according to external target designation data. The loss of the entire RLC will not affect the capabilities of the anti-submarine defense. The connection is extremely resistant to damage: you can look back at “Zamvolt” and apply retractable from the antenna housing. Finally, a satellite phone, lying in the pocket of each officer.

With the development of anti-aircraft missiles with active seeker that do not require external illumination, it became possible to shoot missiles on homing, according to other ships or the onboard helicopter radar. The possibility of direct participation in the air defense / missile defense system of ships and the guidance of anti-aircraft missiles was originally built in modern AWACS aircraft (E-2 mod. D) or F-35 fighter jets.

October 24 2014 of the year during the exercise was successfully carried out with the help of SM-6 rockets a massive attack of low-flying subsonic and supersonic targets simulating the corresponding anti-ship missiles. The successful interception of the GQM-163A supersonic training target (corresponding in characteristics and flight profile to the Mosquito P-270 rocket and the BQM-74 subsonic training target) was performed. Both targets were intercepted during the flight at ultra-low altitude with over-the-horizon launches of the SM-6. The carrier ship itself did not see training targets beyond the radio horizon. and intercepted them using SM-6 active homing heads.

A damaged but not surrendered destroyer can still be used as a floating arsenal. You must agree that it is much better to have in your order an extra fifty missiles and other weapons than a pile of burnt debris on the ocean floor.

Finally, nothing puts him to discharge his ammunition to the end, covering the enemy with a flock of “Calibrov”.

Ctrl Enter
Noticed oshЫbku Highlight text and press. Ctrl + Enter
We are
When will “Zamvolt” overturn?Armor blast
226 comments
Information
Dear reader, to leave comments on the publication, you must to register.