February 12 2016
25
The Minsk negotiation process is more dead than alive. They talk less about him at the “highest level”, somehow more by inertia and in justification of sanctions against Russia. This is the "funeral" ... Everything seemed to return to the starting point, about a year ago, however, the Kiev junta retains some kind of truce in the Donbas. 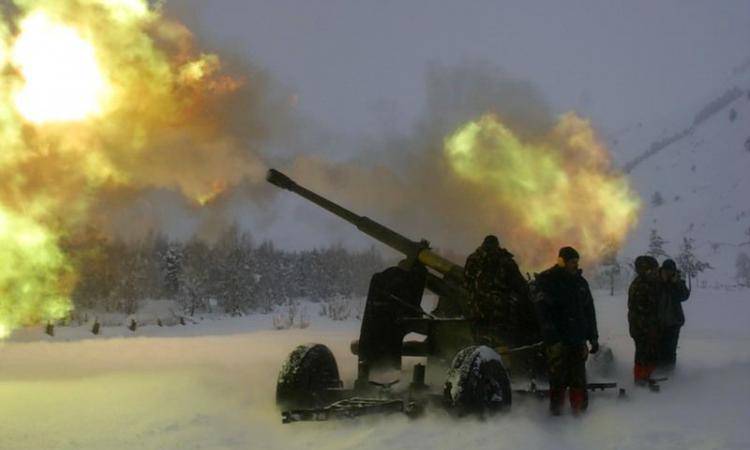 Ukrainian political scientists, though from Moscow, still know a lot of things. Rostislav Ischenko believes that Kiev is not yet ripe for a solution: first, the offensive in the Donbass, and then a coup, or vice versa, first, the final Bandera-Nazi coup, and then the offensive.

Because, sooner or later, Kiev will have to launch an offensive on the Donbass in order to ward off a wave of popular anger for the economic catastrophe and, in general, a complete mess prevailing in the country. To write off everything on the war in the Donbass and Russia.

Alexander Rogers finds that the APU is no longer capable of a serious offensive due to moral and marauding corruption, and can only bombard Donbass with artillery, which it does.

And it will probably do next. The shelling of Kiev serves as an argument invented by him, allegedly before the complete cease-fire in the Donbass it is impossible to start the implementation of the Minsk agreements, and the fire still does not stop ...

In fact, Poroshenko managed to establish his little dictatorship. He still did not hand over Prosecutor General Shokin, and the Prosecutor General’s Office with its security officials, and took the Security Service of Ukraine, relegating Nalyvaychenko’s American creature, and putting at the helm of the extremely important power department of Gritsak. It is noteworthy that Shokin and Gritsak gave a joint interview about the situation in Ukraine, as if the oath of allegiance to Poroshenko.

The avant-garde of the Bandera revolution - the Right Sector split into supporters of its former head, Dmitro Yarosh, and his opponents, who have already declared Yarosh "an FSB agent." And lurking. No action is taken, limited to demonstration, like hanging in Lviv Chocolates.

In the government, Poroshenko is trying to exercise his dictatorship with the help of Kononenko-Martynenko’s “beloved friends,” and here he met more serious resistance. Demonstratively resigned Minister-Varyag Abromavicius, accusing the conductors of economic policy Poroshenko of corruption. And the demarche of the American bookmark Abromavicius was immediately supported by the entire diplomatic western army in Kiev.

Note that the corruption charge is a standard American lie, when Washington needs to cover up real political motives. An ordinary tsereushnaya attack under the "false flag", in such a simple way Washington discredits its enemies, starting with Yugoslav President Milosevic, and is already approaching Vladimir Putin.

Poroshenko's friends of corruption are also not at all fighting corruption, without which, by the way, in no market economy can we do anything. American corruption, lobbying here is a clear favorite, and certainly it is no better than local abuses. By the way, Abromavicius, when they demanded explanations from the government, tried to persuade him to remain in the ministerial chair, suddenly demanded in reply the resignation ... of the General Prosecutor Shokin. That is, the fulfillment of the long-standing requirement of US Ambassador Payette.

Economic experts say that Kiev’s western creditors came for the last: to take away the remnants of state property and assets of the Ukrainian oligarchs, accusing everyone of corruption and inefficiency. With the help of "fair weaning", which was supposed to carry out the "Western looking" Abromavicius, through privatization and reforms. Including Poroshenko and his oligarch friends ... That's where Abromavicius' dog is buried.

To do this, the Varyag Minister Abromavicius had to establish control over the entire Ukrainian economy, assert its leaders as a minister, and not carry out the orders of any Kononenko. But who is he, indignant at Poroshenko? Abromavicius - Looking West ...

Bandera Ukraine begins a new история: “The forces of evil want to rewind everything back,” Abromavicius rant, and this is clearly not only Kononenko and Poroshenko’s other “beloved friends.” The name of Poroshenko himself has not yet been named, however, it is already in the queue. Abromavicius has already appointed a term, according to him, everything should be decided by the end of February. Or Poroshenko and his friends will declare surrender, or ...

Much remains, of course, behind the scenes. It is difficult to explain, for example, the unsinkability of Prime Minister Yatsenyuk, the motives of the psychic attacks on Yatsenyuk and Avakov, the tie governor Saakashvili, on what does Zits-President Poroshenko, after all, count?

If Poroshenko does not give up all property to the western colonialists-creditors, he himself will be accused of corruption. If he gives up, his oligarchic army will rebel, and the “reforms” will finally destabilize the economy, which, in fact, rests on the informal and “corruption” connections of the remaining oligarchs. Without so-called “corruption,” Ukraine’s economy will collapse, that’s the problem!

In general, the policy of Poroshenko "neither" Minsk ", nor war" put everyone in a dead end, and Europe, and the United States, and Russia. At the end of February, according to the ultimatum of Abromavicius, Poroshenko may lose legitimacy for the West, because of its uselessness.

Some observers believe: “the crisis of Abromavicius” suggests that the most intelligent rats ran away from the ukrokorablya. Maybe. Maybe after the Munich Security Conference 12-14 in February, Chancellor Merkel and President Hollande will again have to fly urgently to Moscow to see Vladimir Putin.

Ctrl Enter
Noticed oshЫbku Highlight text and press. Ctrl + Enter
We are
Results of the week. “Excuse me, aren't you crazy?” - “No. I have a certificate "Results of the week. “In our cooperative, the board is always agreed”
25 comments
Information
Dear reader, to leave comments on the publication, you must to register.