The end of the first republic

February 15 2016
5
By the end of 1950, the elderly president of the Republic of Korea, Lee Seung Man, had finally turned from a popular leader and hero in the struggle against the imperial yoke of Japan into a dictator and usurper of power that was hated by almost all sections of society. With him, the country plunged deeper into the economic crisis. In many ways, this was due to the monstrous corruption and nepotism, when all key areas of the economy were controlled by local oligarchs. And then the Americans suddenly cut financial aid. The political regime of Lee Seung Man was an overt dictatorship. Political opponents and simply dissatisfied were subjected to repression, including direct violence. The situation was particularly cynical because officials, including Lee Seung Man himself, denounced the opposition as American agents, but at the same time they openly served the same States as much as possible. 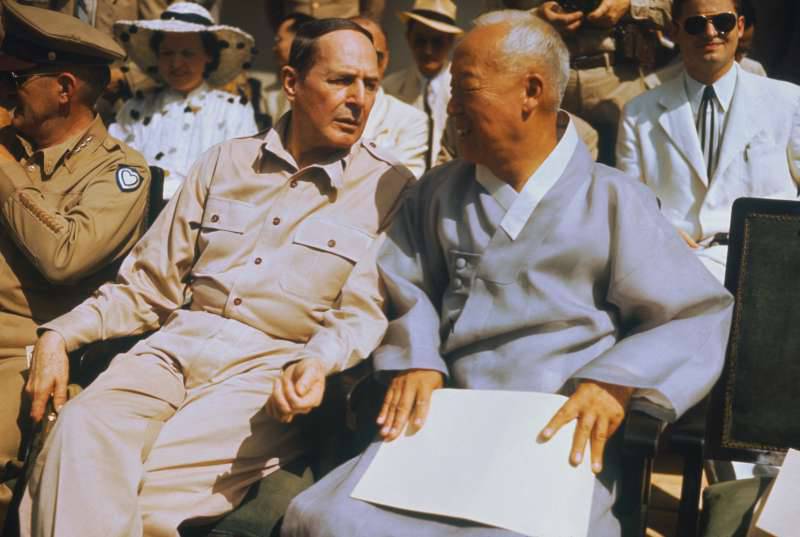 Elections falsified. The constitution was changed at the request of the dictator himself or the oligarchic circles. For example, it was amended to allow the president to be in power an unlimited number of terms, and not three, as before.

The only thing that helped him stay in power was the unconditional support of the United States, towards which he pursued a policy of unquestioning obedience. Relations with the rest of the neighbors were worse than ever. For example, the USSR refused to establish any relations with Seoul at all, especially after the latter’s allegations that the Soviet Union owed Korea in compensation for the Korean War ... Primorsky Krai. They quarreled with Japan over the Dokdo-Takeshima islands, which Li Seung Man annexed along with the adjacent seas, which they did not even think of in North Korea. As for the DPRK, the war with it was, in fact, lost. Not only that, without the help of the UN troops, the army of Seoul was actually crushed, as well as by the results of the new division between the North and the South, the strategically important Kaesong was lost. 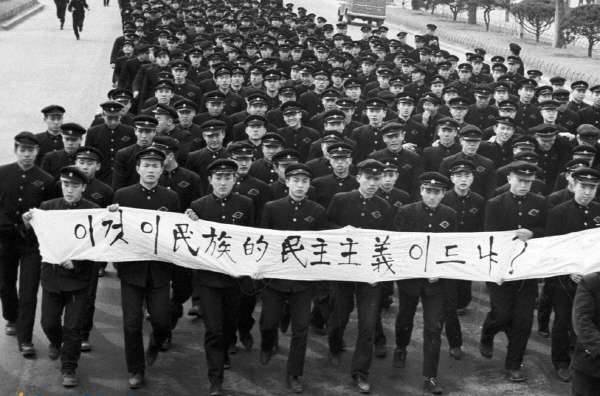 By 1960, the population’s discontent and thirst for change had reached their limits. After the next “elections”, in which the incumbent head of state “won” on a no-alternative basis with the result in 100% (!!!), the “elections” of the vice-president, in which not popular opposition candidate won, won in a similar way Myung, and frankly pro-imperious Lee Ki Poong, who also won with an incredible margin. 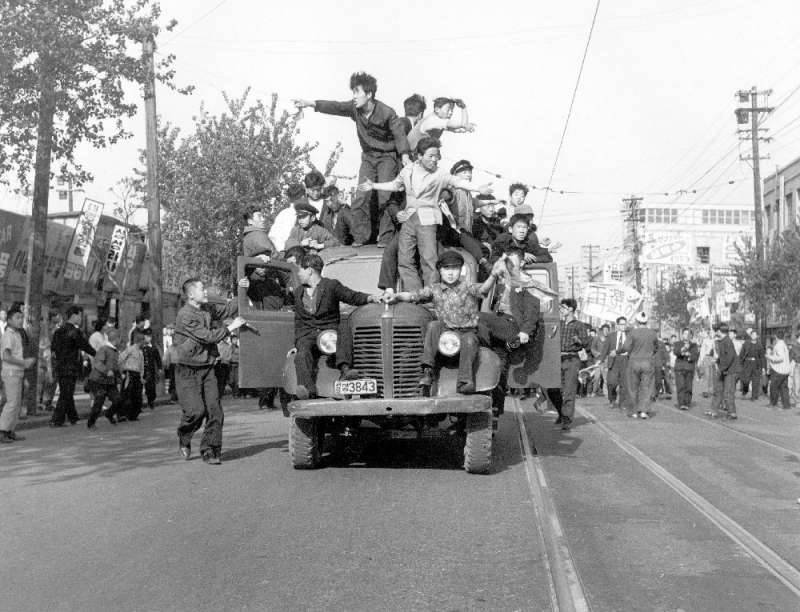 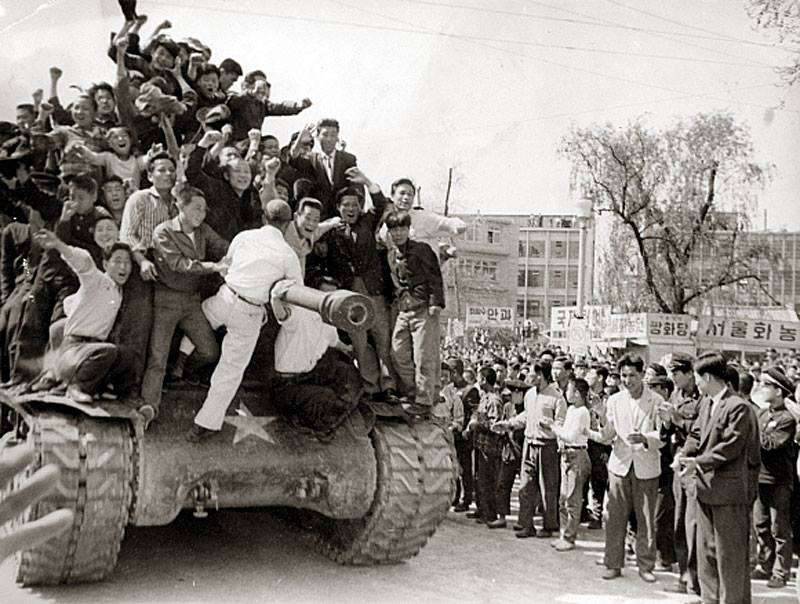 The first riots caused by such frank fraud, began on March 17. The police almost immediately applied weapon, resulting in the death of several people.

The situation continued to heat up. The reason for the new outbreak of popular anger was the discovery of 11 on April by the body of one of the protesters, student Kim Joo Yul, who disappeared during the last wave of protests. A crowd of 30,000 protesters almost immediately gathered in Masan. 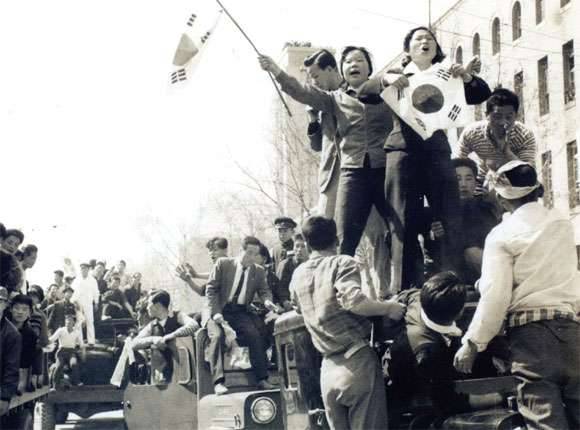 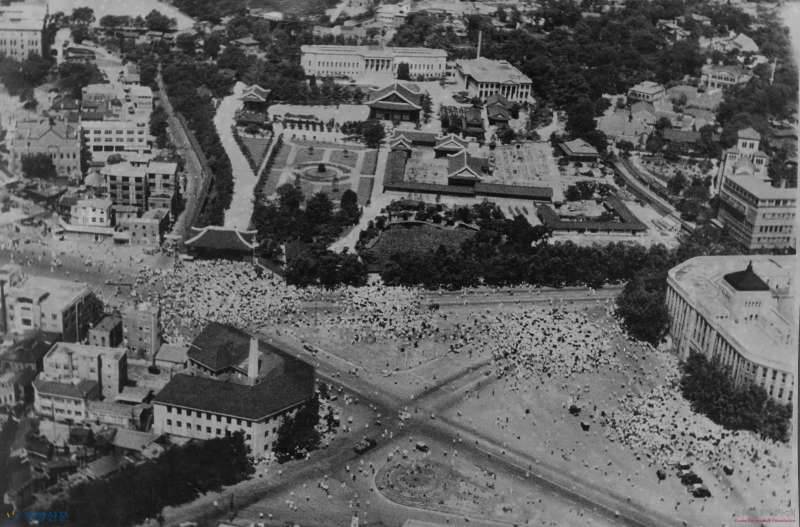 By April 19, the movement reached the capital of the country - Seoul, where more than 100 thousand people took to the streets. Pogroms of government institutions, offices of the ruling party and other places connected with the name of the hated dictator began. Clashes with the police became widespread.

A state of emergency was declared in the capital, as well as in Busan, Daegu, Gwangju, Daejeon, after which the police and the army opened fire on the rebel people with live ammunition. More than 100 people died, but the protests did not stop, but on the contrary, they gained strength. At some point, the inevitable happened: one by one, the officials began to get out of the control of the dictator. 21 April resigned the cabinet. 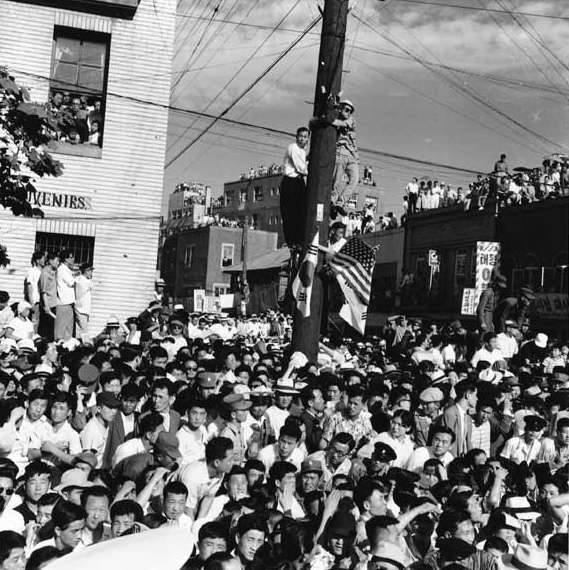 The fracture occurred on April 26. On this day, the police and the army refused to follow orders from Seung Man’s body and did not shoot at the protesters, and the parliament, which the dictator considered fully obedient, suddenly adopted a resolution demanding the resignation of the president and declared the election results invalid.

These requirements were joined by the US ambassador to Korea. The Americans already understood what was going on and, in private conversations, they demanded that Seung Man’s authority to give up power, which he, without thinking twice, did, after which the CIA plane took him away from the massacre of the Hawaiian Islands. So the first republic fell, having been replaced at first by a short period of chaos, and then by a new dictatorship, this time a military one.

The April revolution occupies an important place in the self-consciousness of South Koreans. Since 1945, their история abounded with examples of dictatorships that cruelly surpassed even the Japanese colonial authorities. But it was precisely in April that the 1960 of the year began, letting the establishment of order, at least a bit like justice.

Ctrl Enter
Noticed oshЫbku Highlight text and press. Ctrl + Enter
We are
Orange Revolution in KoreanWorld War II: The Fall of Imperial Japan
5 comments
Information
Dear reader, to leave comments on the publication, you must to register.