February 13 2016
48
The German magazine Caliber Nr.1-2016 has published an article on the IPSC Special Edition, a self-loading rifle “Hammer Vepr-12”.

(He has something in the box. The title is an untranslatable pun. - Approx. Translator.)

A new version of the “IPSC special edition” self-loading rifle Hammer Vepr-12 based on the MT system. Kalashnikov is significantly different from most modern self-loading rifles with a tubular magazine, such as Benelli, Beretta or Remington. 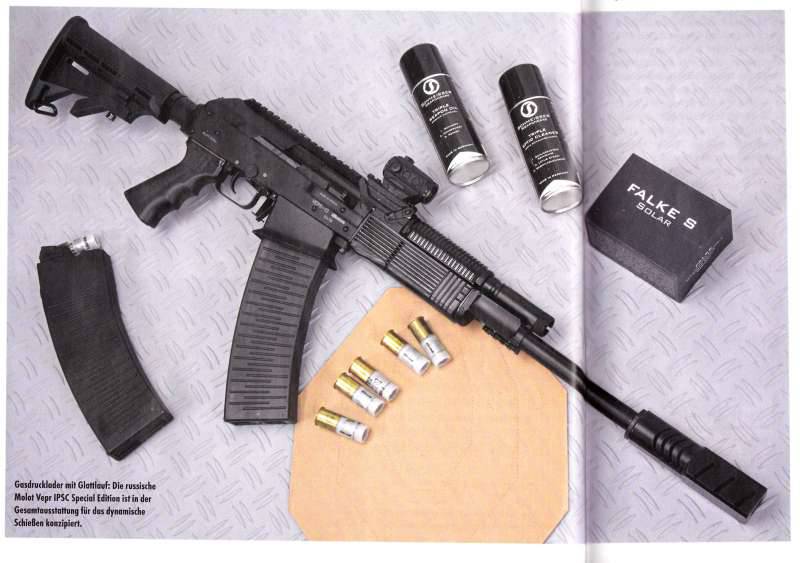 The fact that the self-loading rifle Hammer Boar-12 in the hands of a trained shooter is a very effective tool was proved by the still talented German shooter Dirk Frey at the European Championship 2006 of practical shooting, held in Greece. Then, with his own hand-tuned Veprem, he became a silver medalist in the open class, demonstrating results worthy of the ancient Greek myths. For example, in the last exercise, for 3,34 seconds, he hit 8 steel targets at a distance of 12 meters, standing on a swinging platform.

This gun is a general layout and design as a whole corresponds to the AK-47, famous for its reliability in harsh conditions. The rifle uses gas-assisted automatics with a long stroke of the gas piston and locking the barrel with a butterfly valve.

Partial disassembly of the gun 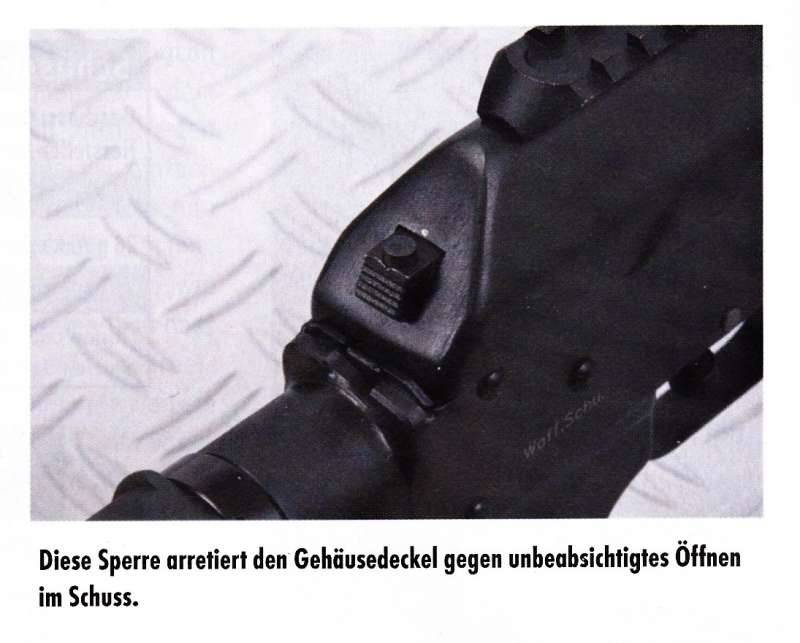 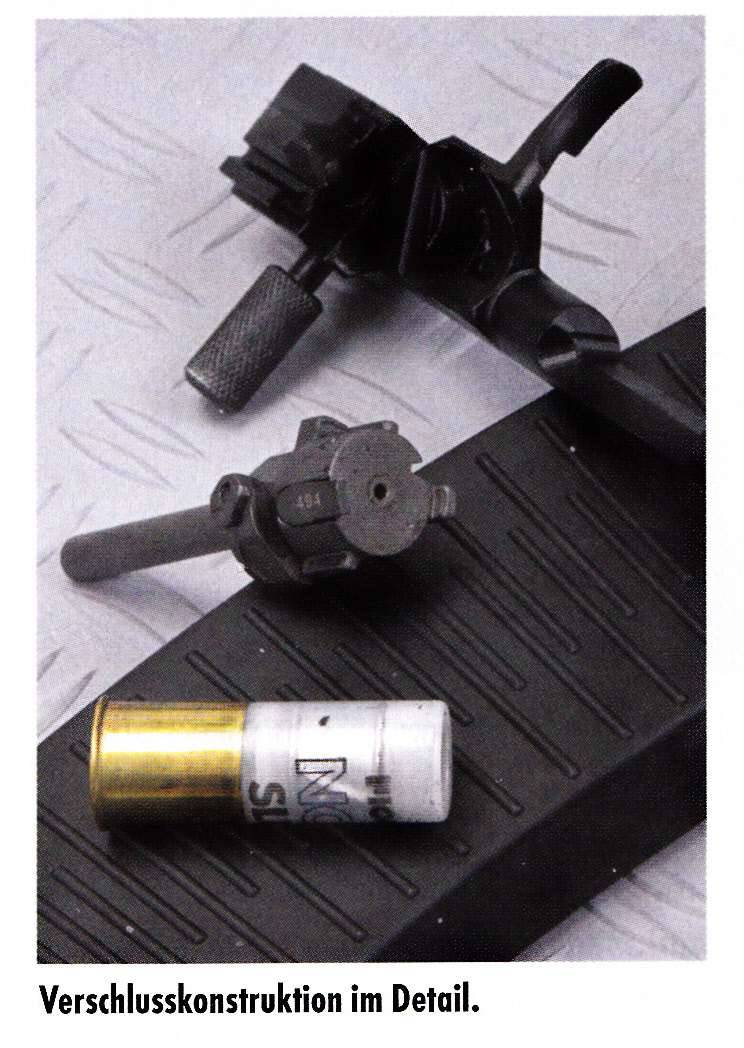 To ensure durable work at high loads, common in practical shooting, the receiver is made on the basis of the PKK light machine gun. Dismantling weapons cope and child. After pressing the latch button, the receiver cover flips up on the hinge, after which access to the return spring and the bolt group opens. The gun weighs without cartridges and attachments 3,6 kg. Chrome-plated inside the barrel length 430 mm ends with a monumental muzzle brake-compensator with three huge expansion chambers. 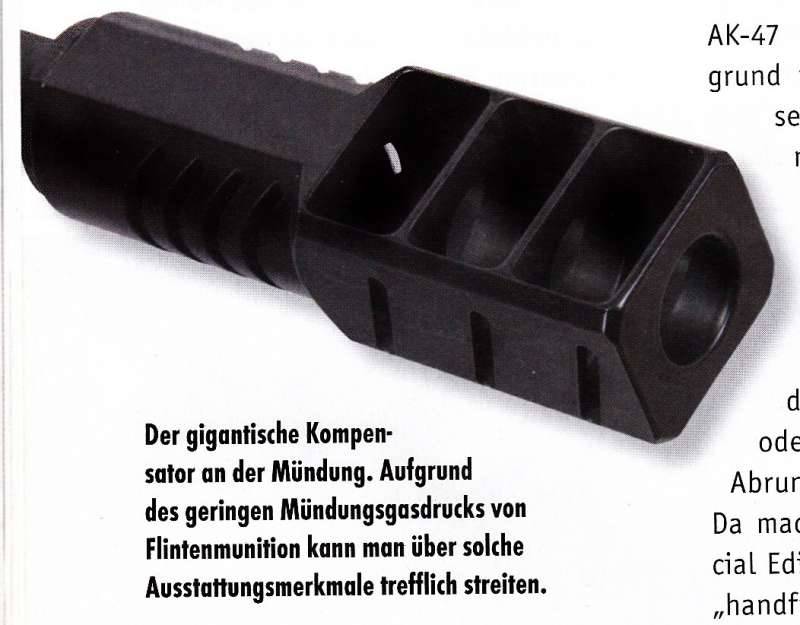 Since the pressure of gases at the exit from the barrel of a smooth-bore weapon is much lower than that of a rifled gun, the need for such a brake is at least debatable. Nevertheless, it cannot be considered superfluous, if only because, due to its mass, it reduces the toss of weapons when firing fast batches. 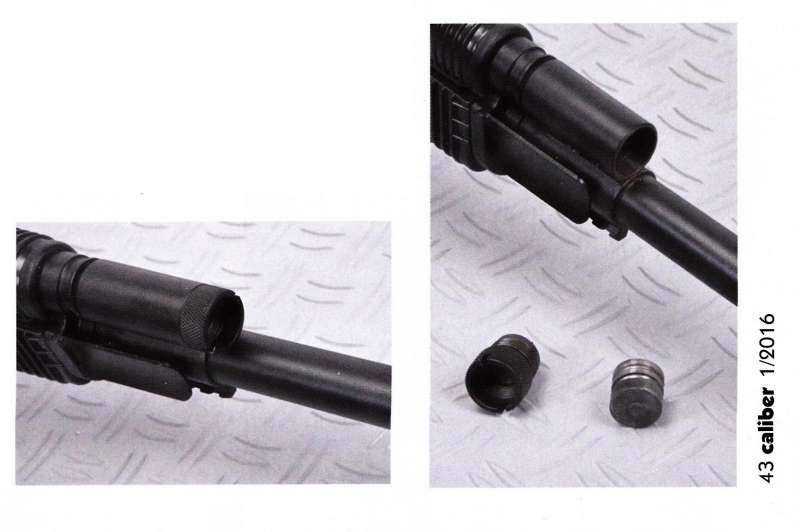 The butt mount is changed in such a way that it is now possible to install AR-15 butts, the choice of which is huge. The test sample was equipped with the simplest stock from the M4 with six fixed positions in length, but any other can be installed. For example, FAB Defens M4 / AR-15 GL Shock with height-adjustable cheek and an additional damping element, further reducing the return of 12-caliber. But, as said, there are no limits in this respect. 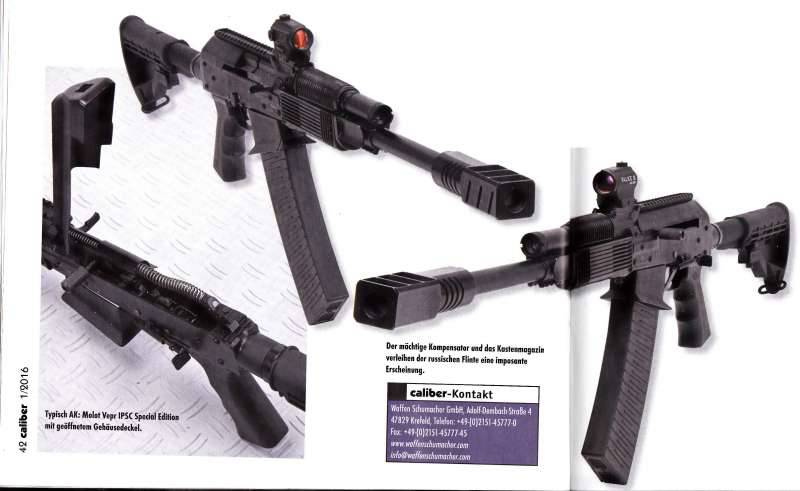 The descent force, although it is 3,05 kg, nevertheless, compares favorably with other AK guns and rifles we tested.

All controls are located near the trigger, which provides quick and convenient access to them, although it requires habituation. The usual safety lever is replaced by a button on the right side of the receiver above the trigger guard, which is easily accessible to the index finger.

The magazine retainer, which is a rather complex mechanism with a pusher mounted on the receiver on the left, is also unaccustomed. The pusher is driven by the thumb and does not require changing the position of the shooting hand. 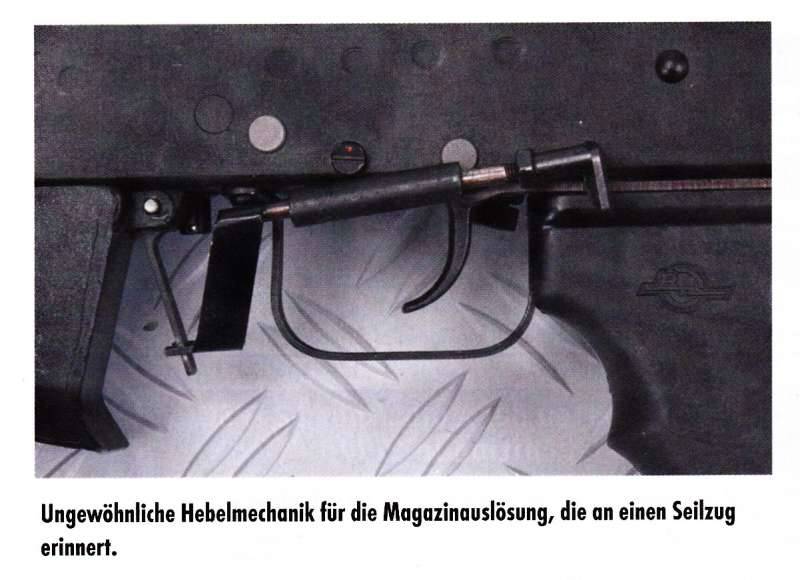 The shutter delay button is located above the trigger and is activated by the index finger.

The shutter delay button is located above the trigger. Turned on and off here

The shutter handle is two-sided, it is easily accessible arrow under stress during the competition. Food is supplied from standard molotovsky plastic shops with a capacity of 2, 8 and 10 cartridges. 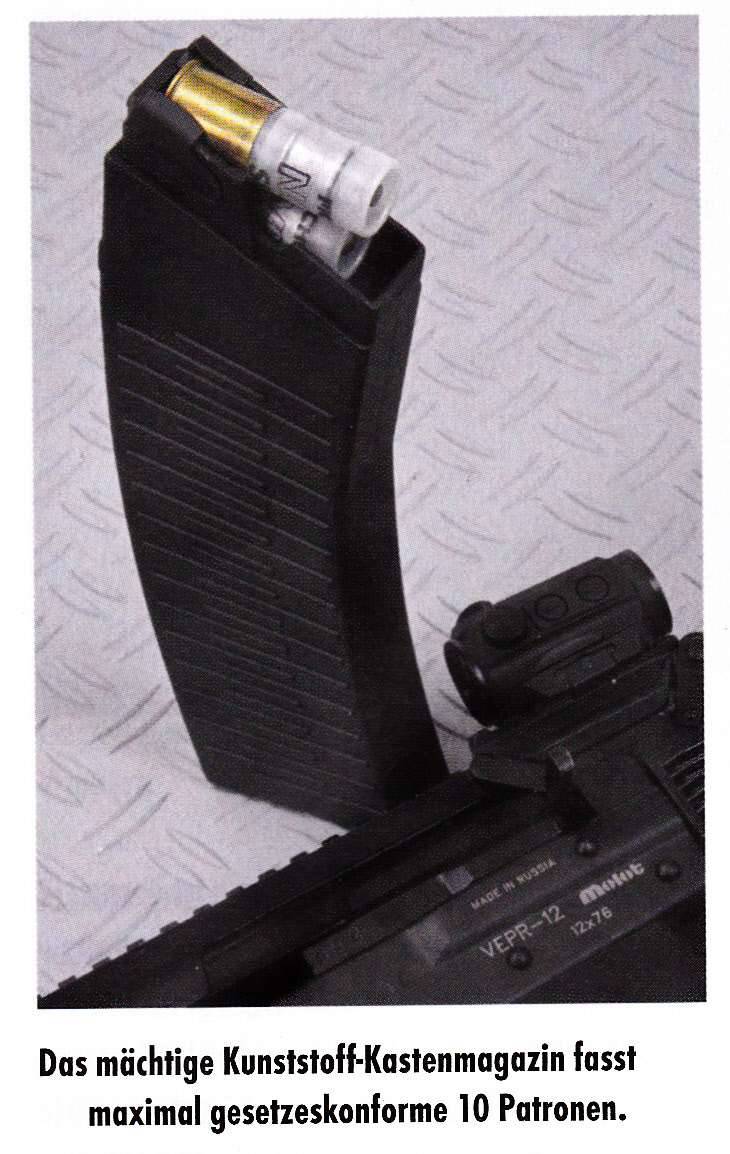 Receiver store is equipped with a neck, accelerating the process of recharging. However, at the same time it is necessary to hook the store in the “Kalashnikov” style first, and then enter it to the end, which requires some training.

Without fly and pillar

For this weapon we can recommend collimator sights of the “mini” or “standard” sizes. And they should not be installed on the receiver cover, but as far as possible from the shooter's eye - on the above-mentioned mounting plate. This increases the likelihood of hitting the target with the first shot when shooting offhand. It also reduces the likelihood of delayed ejection of the liner, which can collide with a large scope, unsuccessfully installed over the ejection window.

For the test, we installed the Falke S collimator sight. Its design strongly resembles the popular Swedish Aimport Micro H-1 / T-1. Falke S is equipped with an additional solar battery and costs half as much as the Swede. During the test, we never had to activate the battery, as the illumination of the covered shooting gallery was enough to supply energy to the sight. The low positioning of the sight turned out to be ideal for quick target acquisition.

Even during military service in the Bundeswehr in the study of foreign weapons, we are accustomed to the fact that AK machines and its "relatives" often have sharp edges of controls, which can lead to finger cuts. Therefore, it is recommended to wear gloves or clean sharp edges. The presented Hammer Vepr-12 in this respect is no exception.

The location of the shutter delay button over the trigger seemed not very successful - there is a chance to touch it with a finger when shooting.

During the test, there was not a single complaint about the reliability of the gun. It easily “eaten” both small-sized cartridges and “magnums” with a sleeve length of 67,5 mm, 70 mm and 76 mm. Unfortunately, we managed to test the Hammer for accuracy only at a distance of 25 m instead of the usual 50. The best result was achieved with GEKO 26 Gramm Competition Slug cartridges with a sleeve length of 67,5 mm. The size of a group of five shots was 16 mm. What could be better? 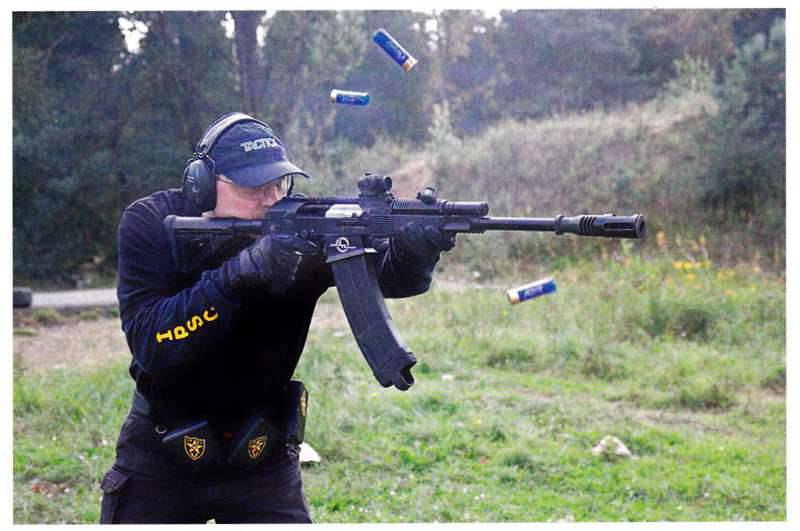 Russian rifleman Vsevolod Ilyin with project manager Sergey Urzhumtsev, who participated in the development of Hammer Vepr-12 for practical shooting

The high-quality, absolutely reliable weapon providing high precision and comfort when shooting. Hammer Vepr-12 IPSC special Edition is a purely sporting weapon, shooting from which is a pleasure. The far forward and low sight ensures fast target acquisition. Against this background, such trifles as a pair of sharp edges, for example, on the mechanism of the dump shop, can not spoil the overall impression. Especially since they are easily removable.

The retail price of the Hammer Boar-12 IPSC special Edition is 2199 euro.