February 20 2016
1
At the beginning of World War II, Australia was in a difficult position. Because of the problems on the fronts, the United Kingdom could not supply the Commonwealth countries with the necessary weapons and equipment, and they had to rely only on themselves. In this connection, in particular, the projects of the perspective small weapons. Fully new systems and options for upgrading existing weapons were proposed. So, in 1942, the project of the machine gun of engineer Gatenby appeared. This weapon, based on original and unusual ideas, did not go into the series, but later became the basis for new developments.


The Gatenby Gun was developed in 1942 year. Its author intended to create modern automatic weapons for the army. In 42, the project documentation was transferred to the Army Directorate of Inventions (Army Invention Directorate), which accepted the project for review. At the request of the Directorate, at least one experienced submachine gun of a new model was made, which was used in field tests and helped the military to form an opinion on the proposal of an enthusiastic inventor.

It should be noted that the classification of Mr. Gatenby’s weapons is a separate issue. In most sources, this product is referred to as a submachine gun, which is fully consistent with the definition of this term. Submachine gun Gatenby Gun had to use pistol cartridges .45ACP and be able to shoot in automatic mode. However, this weapon was made in a pistol form factor with an elongated frame and barrel and without a standard butt or shoulder rest attached. Thus, the characteristic appearance allows to attribute the weapon Gatenby to the category of automatic pistols. Both classification options are justified and have the right to life, although in most cases this weapon is designated precisely as a submachine gun. 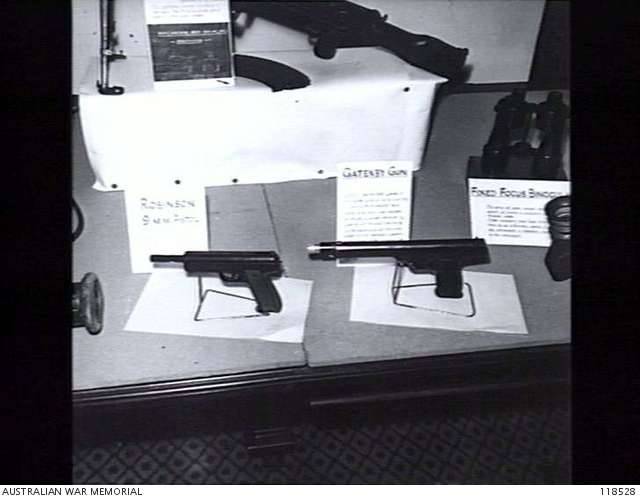 From the “traditional” self-loading or automatic pistols of the time, Gathenby’s weapons were large. It received an elongated frame in the front, a corresponding long barrel and the same trunk housing. In the back there was a pistol grip with a trigger in the safety bracket. Detachable box store was proposed to be placed in the handle.

Gatenby proposed a non-standard automation system that uses the energy of the movement of the trunk. At the same time, unlike some other systems, during the shot the barrel had to move not backward, but forward. To do this, the bolt with a rigidly fixed drummer should have been fixed on the frame without the possibility of movement, and the barrel should have moved. His turn was 1,5 inches. To ensure the operation of such automation, the submachine gun received a reciprocating spring located around the barrel. In the new project it was proposed to use a non-standard method of energy transfer to moving parts of weapons.

For cocking a new submachine gun, the movable barrel should be moved to the most forward position and fixed there. Pressing the trigger allowed the barrel to lift off, after which, under the action of a reciprocating spring, it began to move backwards. During this movement, the breech of state took the upper cartridge from the store and sent it to the chamber. In the rearmost position, the barrel contacted the bolt, and the motionless drummer initiated a shot.

The barrel of the Gatenby Gun was designed in such a way that the bullet experienced serious resistance when moving along the grooves. Due to the contact of the shell of the bullet and the rifling of the barrel, the latter had to move forward, compressing the return-action spring. Moving forward 1,25 inches, the barrel allowed the extractor to completely remove the cartridge case and throw it through the case window. By the time the bullet came out, the barrel was in the extreme front position and was ready for a new shot.

The submachine gun, according to some sources, received a trigger mechanism without a trigger and with a fixed drummer. For fixing the trunk in the front position, an elongated sear was used. Provided for the possibility of complete blocking trigger or shooting in two modes: single or bursts.

For the supply of ammunition, it was proposed to use a detachable box magazine with a single row arrangement of .45ACP cartridges. The store was to be placed in the receiving shaft of the handle and fixed there by a latch. When the magazine was inserted, the upper cartridge was at the level of the supply line, just below the barrel axis. This, in theory, allowed the ammunition to be correctly captured and sent to the chamber. Subsequently, significant disadvantages of this site were revealed.

The sights of the Gatenby system submachine gun were the simplest. An unregulated front sight was provided above the muzzle of the trunk, and there was a rear sight in the rear part of the casing. It should be noted that due to the relatively large length of the weapon, it was possible to significantly increase the line of sight, slightly increasing the effectiveness of the sighting devices.

In the future, a new weapon could get a holster, a detachable shoulder rest and other means, simplifying its operation. However, the test results did not allow the project to reach the stage of creating additional funds.

In 1942, Army Invention Directorate specialists studied the proposed project and also initiated the testing of a new weapon. Apparently, a single prototype was assembled for verification. Information on the manufacture of other weapons such as the Gatenby Gun are not available. Probably, only one submachine gun was enough for testing, which demonstrated that there was no need to manufacture new samples.

According to reports, the proposed submachine gun with unusual automation was different from other weapons by unexpectedly weak recoil with a relatively powerful .45APC cartridge. The specifics of the movements of internal units led to a noticeable reduction in the horizontal component of recoil associated with the ejection of a bullet from the barrel, which, in theory, made it possible to simplify the use of weapons. However, a serious flaw was subsequently revealed that leveled the advantage in the form of weak recoil directly from the shot.

During the tests, it was found that several different pulses were generated during the shooting, which ultimately lead to unacceptable shaking of the weapon. In addition to direct recoil from the shot, an additional impulse arose from moving the trunk in the backward direction. This impulse complicated the handling of weapons and adversely affected the accuracy and accuracy of fire. The presence of this impulse made it difficult to use a submachine gun, even taking into account the partial damping of recoil from a powerful cartridge. For shooting with acceptable accuracy, you had to hold the weapon with both hands.

Another disadvantage of the design was considered the low reliability of operation of the mechanisms for feeding cartridges. During the shooting, primarily in automatic mode, too often there were delays in the operation of automation. The cartridge seized by the barrel did not have sufficient support with further shipment, because of which it could warp and block the work of the mechanisms. To continue the shooting, a rather complicated and lengthy procedure for extracting a cartridge was required, which in practice could lead the shooter out of combat with the most negative consequences.

In its current form, the Gatenby Gun submachine gun did not suit the military. The reliability of the supply mechanisms of cartridges left much to be desired and did not meet the requirements of the military. Even in the absence of delays and sticking rounds, there were problems with shooting caused by the impact on the weapon of two noticeable impulses. Such a weapon could not suit the Australian military, because its drawbacks outweighed all the apparent advantages.

Military engineer Russell S. Robinson participated in the tests of advanced weapons. He became interested in the project Gatenbi and decided to continue its development. Until the end of 1942, R. Robinson independently developed two options for upgrading the existing submachine gun. According to some data, the aim of the new projects was to increase the reliability of the ammunition supply system and reduce the pulses that interfere with normal shooting. 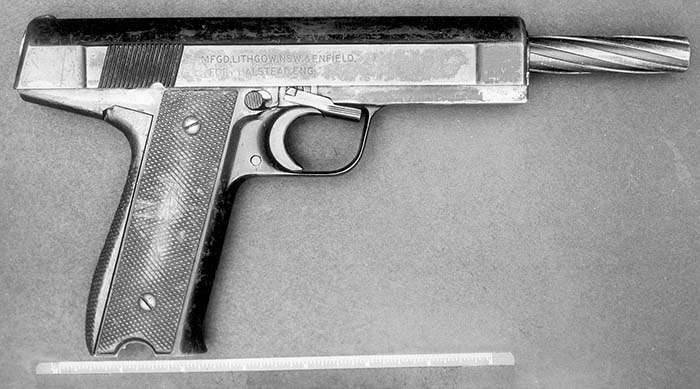 Submachine gun R. Robinson Model 11, created on the basis of the design Gatenby. Photo by Smallarmsreview.com

In addition to correcting existing shortcomings, R. Robinson redid the existing weapon for a new ammunition. Submachine guns with the new designations Model 8 and Model 10 were supposed to use pistol cartridge caliber 9 mm (apparently, 9x19 mm Para). According to some reports, two new projects reached the assembly and testing of prototypes. The checks showed the fundamental possibility of applying the Gatenby scheme in weapons of reduced caliber, and also made it possible to determine the prospects for the changes made.

There is evidence that after the development of the "Model 8" and "Model 10" R. Robinson decided to adapt the original automation to use other cartridges. Calculations showed that such a weapon can use ammunition of a caliber smaller than 9 mm. Among other things, it allowed to reduce the return to acceptable values ​​at which the submachine gun could be held with one hand even when firing with bursts.

In the course of theoretical research R. Robinson came to the conclusion that it was necessary to thoroughly rework the initial ideas. To ensure the required reliability, the barrel should have been made stationary, and the shutter had to move. In addition, some new ideas should be added to the weapon design. Already in 1943, the Model 8 project was developed on the basis of the Gatenby Gun and Model 10 / 11 submachine guns, which differed from them in their mass of parts, principle of operation, and, of course, appearance.

After completing the test, the experienced submachine gun Gatenby was sent to storage. Serial production of such weapons did not start and was not even planned due to serious technical problems. A few years later, the Army Invention Directorate donated the only Gatenby Gun prototype to the museum. It is known that in 1945, these weapons, along with new developments by Russell S. Robinson, were exhibited as part of the AID achievements exposition. The fate of the prototype weapon Gatenby unknown. Apparently, it is stored in one of the warehouses of the military department or lies in the vaults of some Australian museum.