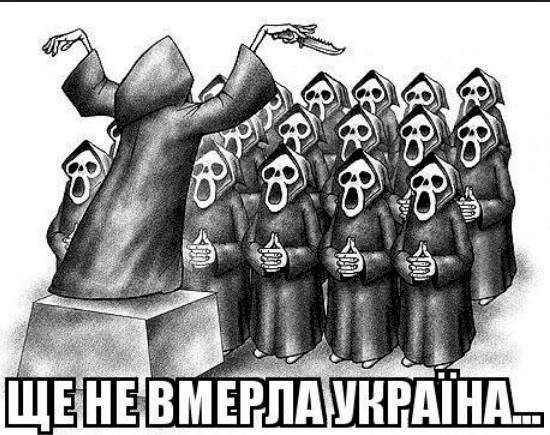 When I hear the words about the Russian-Ukrainian relations that have been spoiled forever, I involuntarily recall the divorce proceedings of Baron Munchausen and his wife Jacobina from the comedy “That same Myunghausen”:

- Explain why divorce? How is it: 20 years all was well and suddenly such a tragedy?

- Sorry, Mr. Judge, the tragedy of 20 has lasted for years ... And now everything should be fine.

Perhaps the Russians have reason to call the February coup 2014 of the year a failure of the Kremlin’s foreign policy in the Ukrainian direction. However, from Kiev the situation is different. In fact, there was nothing to fail. The Ukrainian project since its conception in the beginning of the XIX century was hostile to Russia. In the Russian Empire, they did not know what to do with it, in the Soviet Union they tried to tame it, and the leadership of modern Russia entrusted the decision of the Ukrainian question to the court stories.

For a start, it is worth refuting several myths rooted in recent years.

Firstly, Kiev’s multi-vector policy has always been bluffed. Ukraine was blackmailing the West with the fact that it would go towards rapprochement with Russia, and at the same time blackmail Russia with the threat of rapprochement with the West. It is necessary to understand that the political elites of the Square have always wanted to rob the country on their own and without any obligations to external players. They equally do not need either European integration or an alliance with Russia.

Secondly, in Ukraine there never existed influential political forces oriented toward rapprochement with Russia. Kuchma and Yanukovich’s “pro-Russian” nature is a myth. It was under the authority of these two presidents that the nationalist movement grew and matured. Ukrainization of Ukraine went more successfully under Kuchma and Yanukovych. The Russian population had to choose between two evils: the pro-Russian scum and the nationalists.

At the same time, the alignment of political forces in Ukraine was such that Russia had no one to rely on, except for all the same Kuchma and Yanukovich. It was impossible to create an influential Russian party under their authority, exactly as to ensure the broadcasting of the Russian media in Ukraine.

However, the greatest damage to the reputation of Russia was caused by the fact that large-scale looting and the transformation of Ukraine into a thieves oligarchic state took place again under allegedly “pro-Russian” presidents. This led to the fact that the society formed an opinion about the Russian nature of Ukrainian corruption.

How easy and important the Russians usually get to curse in everything and all their leadership. Only no one will say - how should it have acted in historically formed circumstances? Lead anti-Ukrainian propaganda with a formally "friendly" government? Perhaps it was necessary to impose trade and economic sanctions on Ukraine unilaterally, or to introduce a visa regime? All this would serve as another proof of the old myth about the anti-Ukrainian essence of Russia.

All those who today whine about the failures of Russian policy in Ukraine are not able to calculate the options for the development of the situation at least one step ahead. The only sensible solution to the Ukrainian problem for the Russian leadership was a policy of non-interference in the affairs of a sovereign state.

After the February 2014 coup, everything became fair. All "pro-Russian" parties in Ukraine are crushed or banned. No one bothers European integration. Those who in their right mind cannot be accused of sympathizing with Russia or lacking “patriotism” have come to power. Ukraine can even become a member of the European Union, even 51-m state of the United States ... However, the unexpected discovery for Ukrainians was that they were not expected anywhere. European integration was a great fake.

Another great disappointment was the wildest corruption and incompetence of Ukrainian patriots. Their level of intelligence and culture of behavior causes a wild horror even among the Ukrainian philistine who has had a species. It is not surprising that with such leadership in two years the government system was completely killed and the economy collapsed.

The current authorities are not afraid of anything. They are supported by the West, and they consider themselves to be a titular nation. According to the Ukrainian “concepts”, this gives them the right to commit the most inhuman acts, to carry out absolutely anti-people reforms, to drive thousands of men for slaughter to the ATO zone. Nationalists can godlessly lie to the people, because “Ukraine is a ponad use” and write off any meanness. Isn't it great that Russia has nothing to do with this mess?

The anti-constitutional coup of 2014 and the crimes of the nationalists gave Russia the moral right to tell the truth about the past and present of Ukraine. Millions of people in Russia and abroad have unexpectedly found out for themselves that, until the twentieth century, there was no Ukraine or Ukrainians. This is just an artificially created project by the enemies of Russia. Now it is most naturally closed by the hands of the Ukrainian nationalists themselves. Should we worry about the Russians?

Many believe that Russian-Ukrainian relations are spoiled for decades. I do not think. Everything will happen much faster and depends only on how soon the Ukrainians learn the whole truth about what is happening to them over the past quarter century. I would not be surprised that in a few years the Ukrainians themselves for the slogan "Glory to Ukraine" will beat their faces. This “glory” cost the Ukrainians a very expensive price.

Ctrl Enter
Noticed oshЫbku Highlight text and press. Ctrl + Enter
We are
A great interview with Sergey Lavrov: about Ukraine, Obama and IranOn the other side of the “red” and “white”. Izborsk Club Report
316 comments
Information
Dear reader, to leave comments on the publication, you must to register.