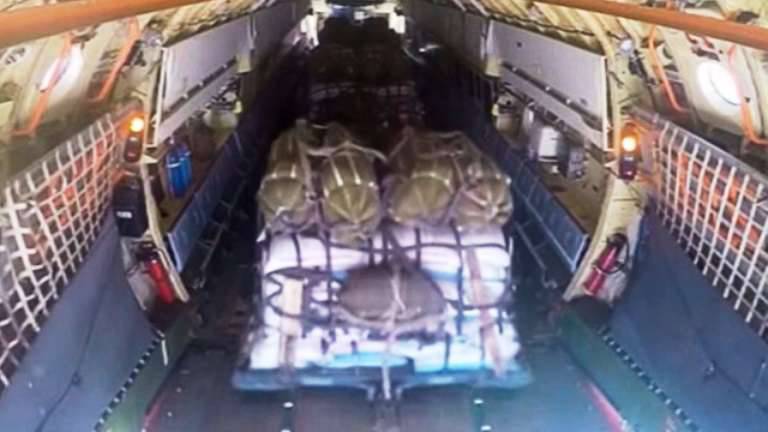 “The cargo fixed on the P-7 parachute platforms was landed on Wednesday evening from 4000 meters into the government-controlled areas of Deir-ez-Zor, the administrative center of the province of the same name in the north-eastern Arab Republic. Its total weight was over 50 tons, ”the agency reported, citing a representative of the Russian group in Syria.

“The release is made, as a rule, at night, the code of neither the aircraft nor the platform is visible. Or during the day - accompanied by fighters. However, it is obvious that if the militants try to attack the board or cargo at this time of day (at night), they will immediately give out their presence, ”the source said.

“In Russia, cargoes are dropped from a height from 600 to 1000 meters, but there was no massive use here. The choice of altitude in 4 kilometer is affected by the presence (for extremists) of air defense weapons and many other factors. The platforms are delivered at one point, the spread in time is 21 second, ”he said.

“Even in such conditions, they never missed. All platforms were delivered to destination. The site is actually 25 square kilometers - five in length and five in width. In my extreme experience, they successfully fall into the three-kilometer zone, ”he said.

Confirmation of the delivery of goods to destination confirms the Syrian intelligence, using its channels.

“On average, depending on the wind, the load takes up to 550 seconds to reach the ground. Then the Syrians, through their intelligence, transmit the data on the receipt. In fact, by the time the plane lands, it is already known that the cargo has been received, ”the source concluded.

In total, more than 200 tons of humanitarian aid have already been delivered to this city.

Ctrl Enter
Noticed oshЫbku Highlight text and press. Ctrl + Enter
We are
The action “Military service under the contract is your choice!” In Rostov-on-Don: future contract servicemen, exhibitions and “Russian Knights”Accurate air discharge
28 comments
Information
Dear reader, to leave comments on the publication, you must to register.