There is a war of words

February 12 2016
29
Washington has long been obsessed with the idea of ​​its “success” in the information war. In the war of words and frames. Recently, however, something went wrong in the old propaganda machine. In the United States, huge amounts of money are being spent on media support, much more than Russia spends, but for some reason Moscow is winning. The reality is, according to Western experts, that Russia has more effective information tools. Maybe it's not about money, but the truth? 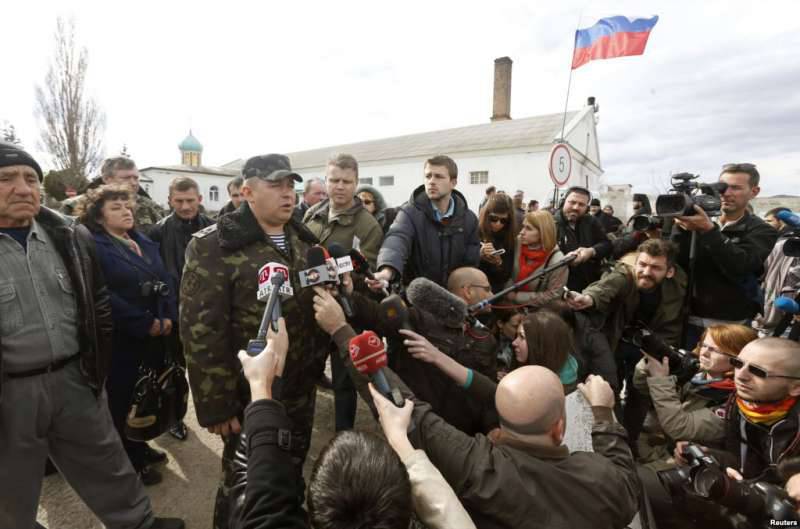 Colonel Sergei Storozhenko, the commander of the military unit in the village of Perevalnoe (Crimea), talks with media representatives in the city of Simferopol. 6 March 2014, the day when the Crimean Parliament voted to join Russia

"Voice of America" sounding the alarm: the Russians are winning the information war.

The annexation of the Crimea in 2014 year and the “follow-up support” of the activities of “armed separatists” in eastern Ukraine, journalist Jonas Bernstein writes, is supported by a “large Russian information campaign”. This campaign is addressed not only to the internal audience of Russia, but also to the public in neighboring countries, who read the Russian media and watch Russian TV channels. Many people in the countries of the former USSR speak and understand Russian.

Last week, on Thursday, a group of experts held a conference in Washington. Its goal was to evaluate Russia's actions in the information war. Perhaps the Russians have already won this battle? One of the experts, the author says, made it clear that this is the way it is.

The conference was titled “Assessing Russia's influence on its periphery: is Russia really winning the information war?” The event was organized by the Broadcasting Board of Governors, the US government agency involved in addressing US government support for major international media, including Voice of America and Radio Free Europe / Freedom.

Speakers spoke at the conference about the impact of media on the audience and about “behavioral results” using examples of information consumers from Estonia, Latvia, Lithuania and Moldova. In addition, they talked about the results of the Gallup World Poll 2014 poll, which collected data from 12 countries that were once republics of the Soviet Union.

According to a Gallup World Poll 2014 survey, the “vast majority” of people from these 12 countries that looked news about the situation in Ukraine and the Crimea during the 2014 conflict of the year, Russian media consider a more reliable source than Western media. Most of those surveyed in Russia, Kyrgyzstan, Kazakhstan, Tajikistan, Belarus, Armenia, and Uzbekistan consider the Russian media to be a “reliable” source of news about the situation in Ukraine and the Crimea. However, most of the majority of the countries of the former Soviet Union supported the annexation of Crimea to Russia. And, most interestingly, the respondents, who watched along with the Russian and Western media, were much more inclined to consider Crimea as part of Russia than those who watched only the Russian media.

Neli Esipova, director of the Gallup Global Migration Research Institute and regional director of The Gallup World Poll in Eastern Europe and the former Soviet Union, said at the conference that these respondents from the 12 countries of the former Soviet Union lived in urban areas and were better educated. “If the West wants to participate in shaping the opinions of people in this region, it must make some clear changes to its communication strategy,” Yesipova said. “And these changes should be made not only in the content, but in the intonations of presenting information ...” Moreover, she noted that this region is unique in that it retains strong ties with Russia, and in the Russian media they know how to address this audience. .

Esipova concluded: “The Russian media won in this round of the information war.”

Another article on the victory of Russian media over Western appeared on the resource. "Everything-PR".

The author of the material, Richard D. Pace, recalls that the task of the Everything-PR site is to study and analyze everything that concerns public relations. In a new article, Pace views and criticizes America’s “obsession with” the idea of ​​its own public relations success: Americans are supposedly ahead of the Russians in this matter. However, the reality is, the author notes, that Russia is much more effective in this matter and has a much more influence on the audience through the media than the United States.

Perhaps the Russians have more talent, the analyst admits. Or they give the world the truth. Or maybe US government officials simply do not know how to do their job. Who knows! One thing is clear: The Broadcasting Board of Directors, which oversees several American media, including Voice of America, is “completely incompetent” (as Richard D. Pace believes).

The Board of Governors himself recognizes that America is losing to Russia the “battle for public relations”.

But what is the reason for the loss?

Perhaps the cause of defeat is "stupid American politics"? In this case, it is not surprising that Russia is winning the "propaganda war."

According to media reports, the author points out, the total budget of the TV channel “RT” for 2016 was 19 billion rubles (approximately 200 million dollars). The Broadcasting Board of Directors predicts a budget of 2016 $ for the financial 751.500.000 year. According to the analyst, the Council can easily “flush the toilet” with this money. Indeed, despite the fact that America spends almost four times more on the media than Russia, the Kremlin has a much more effective influence on the opinion of the international community.

“And this, friends, is called democracy,” writes the American author. “Russia wins honestly and fairly, and American government officials must stop their endless complaints and stop comparing an effective PR machine with a terrorist organization.”

By the way, in addition to the TV channel "RT" and other channels broadcasting to foreign audiences, Russian politicians also participate in the information war. At the highest level, up to the Ministry of Foreign Affairs. No, they do not attack. But they are protected and they come out with revelations.

As an example of such revelations, we can cite the recent speech by the official representative of the Russian Foreign Ministry, Maria Zakharova, on the “Russia 24” TV channel. The speech was a response to absurd Western accusations against Moscow: they say the Russians “thwarted” the inter-Syrian negotiations in Geneva.

According to Zakharova, Russia has flawlessly fulfilled its obligations on the preparation of the inter-Syrian negotiations; blaming Moscow for disrupting the process is completely wrong.

"Our American colleagues are absolutely wrong, accusing us even of disrupting the Geneva talks ... - quotes Zakharov TASS. - Both the opposition and representatives of the official authorities with whom Russia worked were the first to arrive in Geneva. We have done our work flawlessly. ”

“Without preconditions, without blackmail, people came to engage in constructive work,” she explained.

A spokeswoman for the Russian Foreign Ministry called the accusations against Russia in the breakdown of negotiations "the most outspoken lie and misinformation of a low order."

Russia is not measuring its impact on the audience with money, as American broadcasting experts do. Moscow is betting on the "truth", which is not accidentally mentioned by the American analyst, whose opinion was considered above. The incorrect “intonations” of American propagandists unmistakably catch the majority of the public, especially its part that lives in the former Soviet republics.

Trying to fool the brains of the world community, the American and Western media in general, as well as politicians, convince the “audience” that Russians are to blame for the problem of Syrian refugees, that Russians are bombing civilian homes and not terrorist positions. However, not only the Ministry of Foreign Affairs, but also the Ministry of Defense, which daily reports to the public on the progress of the Syrian operation, is on guard over the truth and interests of Russia.

In their lies, the Western media have already reached the point when the internal audience turns away from them. How can they influence the post-Soviet space!

Observed and commented on Oleg Chuvakin
- especially for topwar.ru
Ctrl Enter
Noticed oshЫbku Highlight text and press. Ctrl + Enter
We are
Results of the week. "All power is in truth"Situational analysis of the death of the MH17 flight (Malaysian Boeing 777), made on the basis of engineering analysis from 15.08.2014
29 comments
Information
Dear reader, to leave comments on the publication, you must to register.