Mitraleza and other grandparents of the modern machine gun

February 12 2016
15
Mitraleza (from the French word mitraille - canister, in Russia this type of weapons was called a buckshot) —the French name of a multi-barreled high-speed artillery gun used in the second half of the 19th century, which could fire volley fire with rifle-caliber cartridges and had completely manual reloading. The name of this weapon reflected tactical, but not technical characteristics of the weapon. Mitraleza was supposed to replace the shooting of a canister with artillery shells, which became very difficult after the widespread dissemination of rifled barrels. At the same time mitraleza fired not with a canister, but with ordinary bullets. Subsequently, in French, the word mitrailleuse began to call any machine gun, this name has been preserved to this day.


It is worth noting that the influence of the machine gun on military affairs was enormous. A hail of bullets that attacked the enemy could stop any attack. The fear that soldiers experienced in front of this deadly machine was described in many memoirs. Engineering thought approached the creation of this weapon of infantry gradually, the prototype of the currently famous Maxim machine gun, it was the mitralesa and other similar developments, dating back to the Middle Ages. Already in those years, gunsmiths sought to increase the number of warheads and the firing range of guns. The first experiments that were conducted in this direction can be called the organ and ribodeken.

The organ was a multi-barreled artillery gun that was used in different armies of the world in the 16th and early 17th centuries. In Russia, such tools were called forcible forties, “forty” or food battery. The name, as you might guess, comes from the similarity with the musical musical instrument of the same name. Typically, the bodies had from three to 24 trunks (sometimes more), which were fastened in several rows. Charged each trunk of the body in turn. The seed of the trunks in each row was connected by a common chute, which made it possible to carry out a sequential or simultaneous salvo at the enemy. At the same time, there were other structures of organs: with rotation along the vertical axis or cruciform. 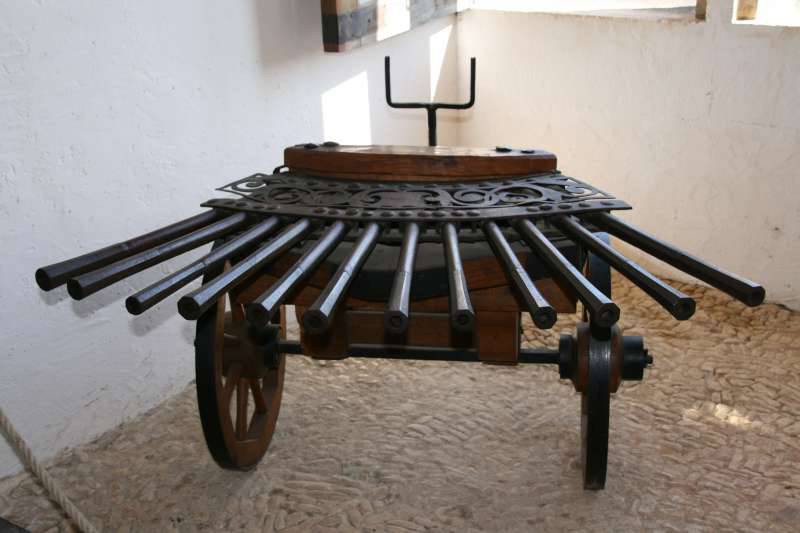 Depending on the caliber of the trunks, the organs were mobile field mounted on a wheeled carriage or stationary. Stationary organs had a caliber 2-3 cm, and field - until 9, see. The organs are completely out of use after the canister was invented. They abandoned them because the accurate aimed fire from the body was almost impossible, and the loading required a very large amount of time to calculate (all the barrels had to be charged separately).

A card projectile, which scattered into many components, could successfully hit enemy soldiers and riders, completely displacing the organs from the battle scene. At the same time, the widespread use of capsule cartridges and rifled weapons in the 19th century led to a significant increase in the speed and range of a bullet. Therefore, the designers again thought about the possibility of creating a weapon that would have fired a large number of bullets in a short period of time. Such a weapon would make it possible to perfectly hit the enemy’s infantry marching into closed ranks.

However, the first invention in this area was made back in 1718 by English lawyer James Puckl. This London notary patented his “Shoe gun” that year. The weapon was a barrel mounted on a tripod with an 11-drum cylinder in the breech. Each shot of this gun was made while turning the drum, as in an ordinary revolver. After all the charges of the drum were used, it was changed to a new one, which made it possible to produce up to 11 shots per minute, an unheard of rate of fire at that time. At the same time, the combat crew of the “Shotgun” consisted of several people. 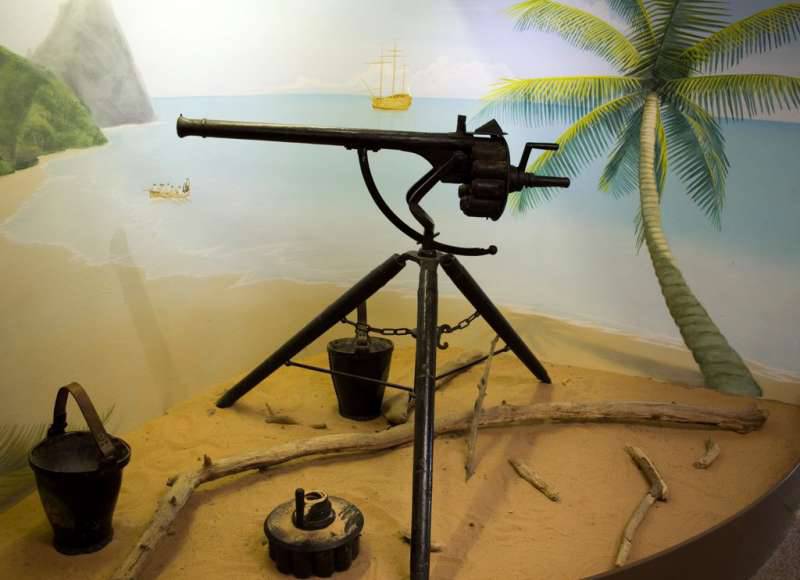 It was a great success that in the specification to the James Tow of 1718, which was preserved in the Patent Office, there are illustrations and a detailed description of the weapon. And also the fact that the first experimental model of this gun, made in metal, as well as a fully equipped gun, was saved by the Duke Bakklohom and sent to the Tower of London and preserved to this day. The development of the Pack was installed on a tripod, which had a surprisingly modern design. The upper part of the turret could freely rotate in a horizontal plane, being inserted into a pipe fixed to the base. Movement in the vertical plane and aiming was carried out using a “crane with a limiter”. One of the most important parts of the weapon was a detachable drum, in which up to 11 charging chambers were provided.

With each turn of the handle, the camera drum one by one turned out at the breech. Each of the cameras had a flintlock for firing a shot and could be charged with various projectiles. In fact, the development of the Tow was an ordinary silicon gun, which was installed on a tripod and equipped with a drum. At the demonstration of his development, James Pucle presented two versions of the execution: the first with spherical bullets that are quite common for those years, and the second with cubic ones. It was believed that cubic bullets should cause more injuries, they were planned to be used against Muslim enemies (including Turks). However, for some reason, the invention of James Tow did not interest his contemporaries.

Finally, in the 19th century, engineering European thought presented the first truly viable projects of rapid-fire weapon systems. First of all, an important industrial condition was the industrial revolution. At the same time mitraleza appeared in Belgium, the country which became the leader of industrial recovery. The first mitraleza was developed by Captain Fafshamps in the 1851 year, it was a manual 50-barrel gun. The inventor made a prototype according to his own drawings. Later the project was finalized by J. Montigny and L. Christoph and demonstrated to Emperor Napoleon III already in 1859. Soon after this demonstration, "Mithralene Montigny" was adopted by the French army. It should be noted that Montigny showed quite a lot of ingenuity, since the weapon he had created for his time was distinguished by very good fighting qualities and a rather original device. His mitralia was 37 13-mm barrel, while all the barrels were charged at the same time. For this purpose, a special plate-holder with holes for cartridges was used, in which the cartridges were inserted and held behind the edges. Mitraleza shot was made by turning the knob. 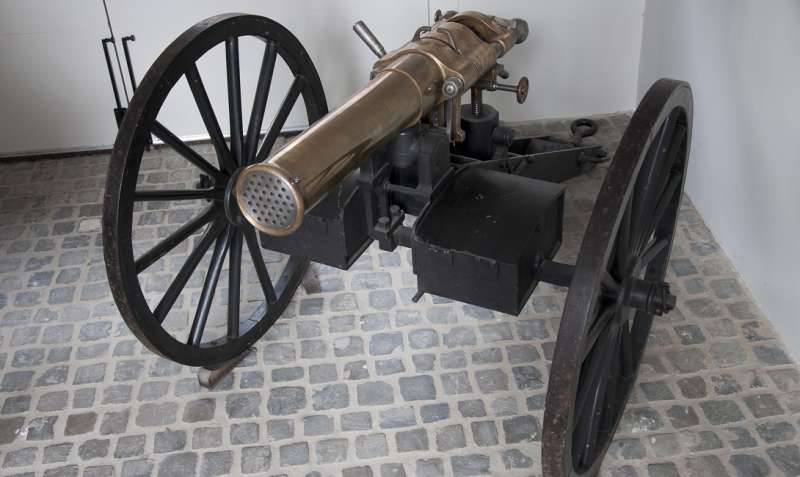 From the point of view of the development of military technology, mitraleses can be called the forerunners of the machine gun, but this is only partly true. In fact, they were considered as a kind of artillery and they acted as part of artillery units, using the same tactical techniques. In terms of mass and dimensions, they were also very close to the guns of those years. At the same time, their firing range was lower than that of field artillery: the maximum firing range of 3,5 km, but in reality they were not used at a distance of more than two kilometers, but at the same time no less than 1,5 kilometers, since at a smaller distance there was a probability of defeat weapons of enemy soldiers. At such a range, the guidance of mitralies on the target, equipped with primitive sights, was accompanied by serious difficulties, which, in turn, caused their low effectiveness on the battlefield in combination with a small sector of shelling and the inability to quickly transfer fire from one target to another. Also, the disadvantages of mitralia was attributed to a long recharge time. In turn, the low mobility of mitralez did not allow them to be used to directly support infantry on the battlefield, that is, in the role in which later machine guns were used.

Later, in 1862, a doctor by profession, an American, Richard Gatling, designed his version of mitraleza with rotating trunks and a magazine that was located above them. He called his invention the “battery tool”, later he would be called a tool or a Gatling machine gun. The Gatling system usually ranged from 4-x to 10-ti of different calibers (12-40-mm), which rotated around a central axis. It allowed firing at a range of up to one kilometer with a rate of fire from 200 to 1000 shots per minute, and in the case of using an electric drive, it could reach 3000 shots per minute. The rotation of the trunks of the first Gatling models was manual, but later began to use the electric drive. Gatling's machine gun was quite cumbersome, most often it was placed on gun carriages from light cannons, therefore it was considered an artillery weapon. Drum store was installed on top. During the cycle of turning the barrel block to 360 °, each of them makes one shot, is released from the cartridge case and is charged again. During the turn there was also a natural cooling of the trunk.

Baptism for mitraliez was the US Civil War. The invention of Gatling attracted northerners who successfully used it in battles with the Confederates. Southerners tried to answer this by developing their models. For example, Mitraleza Williams, who was distinguished by a large caliber and shot 450-gram bullets, gained fame. In this case, the rate of its shooting was 65 shots per minute. The system turned out to be very cumbersome and heavy, so it was not widespread. 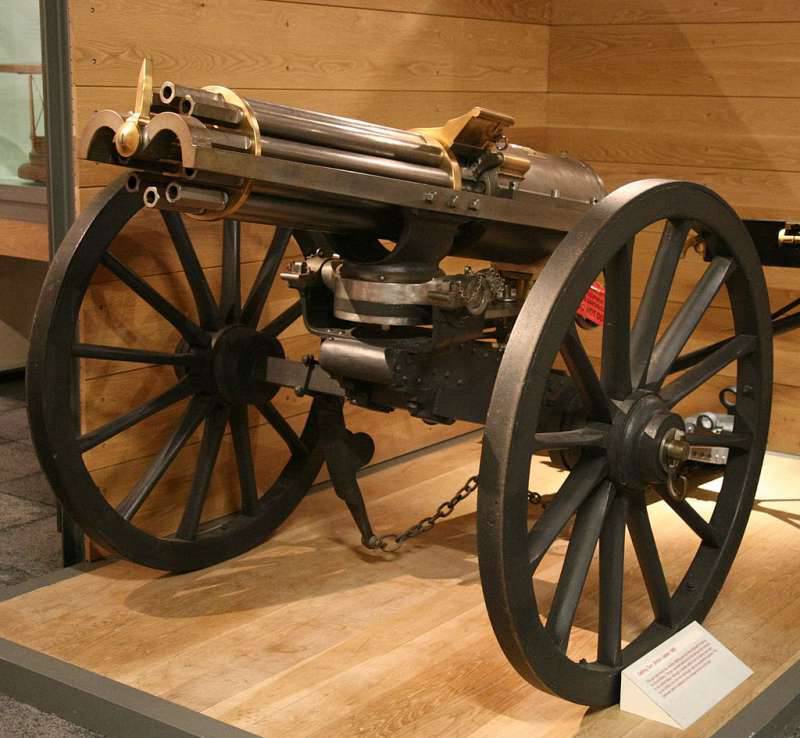 Later, after the American Civil War, the Gatling system was repeatedly modified and improved - American Gardner, Swede Nordenfeld, Briton Fitzgerald. At the same time, it was a question not only of machine guns, but also of small-caliber guns - a typical example was the five-barrel 37 mm Hotchkiss cannon, which was adopted by the Russian fleet in 1881 (a 47-mm version of this gun was also produced).

At present, the French have made a bet on mitraleses, who have acquired several dozen mitraleses, built according to the project of engineer Refffy. He even managed to organize the industrial production of his gun. At that time, France was preparing for the expected aggression by Prussia, but could not give a decent response to the enemy. The French soldiers did not know how to effectively manage the new cannon, often they simply could not hit the enemy. However, there were also local successes: the mitraliez battery, commanded by Captain Barba in the battle of Gravelotte, quickly managed to determine the distance to the target, several times disrupting the massive attacks of the Prussian infantry. In that battle, the Prussian army suffered serious losses.

At first, mitralieses and Gatling guns even competed with the Maxim machine gun, which was invented in the 1883 year, but later, the user-friendly and lighter legendary weapon simply ousted all mitralies from the battlefield, turning them into possession stories. At the same time, the last of the mitralia in the early twentieth century were used in the fleet, being anti-mine caliber weapons. For example, the five-barrel guns of Hotchkiss shot half-kilogram cast-iron shells at the destroyers and were used in the US Army and Russia.