Russian heroes of the French resistance

February 13 2016
5
Russian participation in the French resistance movement is still a little-known page of the Second World War. Meanwhile, more than 35 thousand Soviet soldiers and Russian émigrés fought against fascists on French soil. Seven and a half thousand of them died in battles with the enemy.
Russian heroes General de Gaulle's speech on the London radio calling for all French to unite to fight the invaders

History Participation of Russian immigrants in the resistance movement begins with the first days of the occupation of France. At the call of General de Gaulle, they selflessly engaged in clandestine activities with the French patriots. They were guided by a sense of duty towards their second homeland and a desire to contribute to the struggle against the fascist invaders. 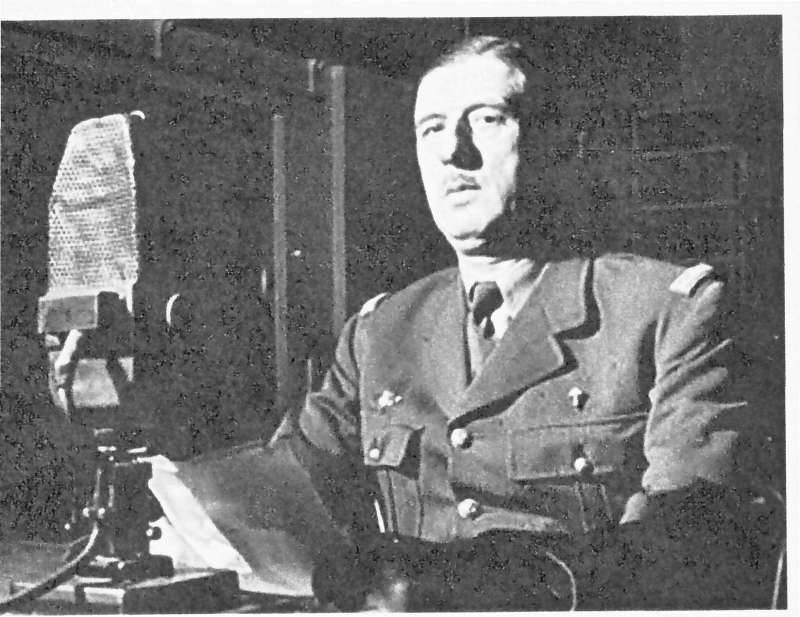 One of the first in Paris was the “Civil and Military Organization”, headed by World War I veteran Jacques Artus. The secretary general of this organization was the daughter of Russian émigrés Princess Vera Obolenskaya. In many cities of occupied France, they created an extensive network of secret groups, which included people of various professions, classes, religions. It is known that a week before the German attack on the Soviet Union, members of the “Civil and Military Organization” transferred to London with great difficulty a message about the forthcoming aggression. 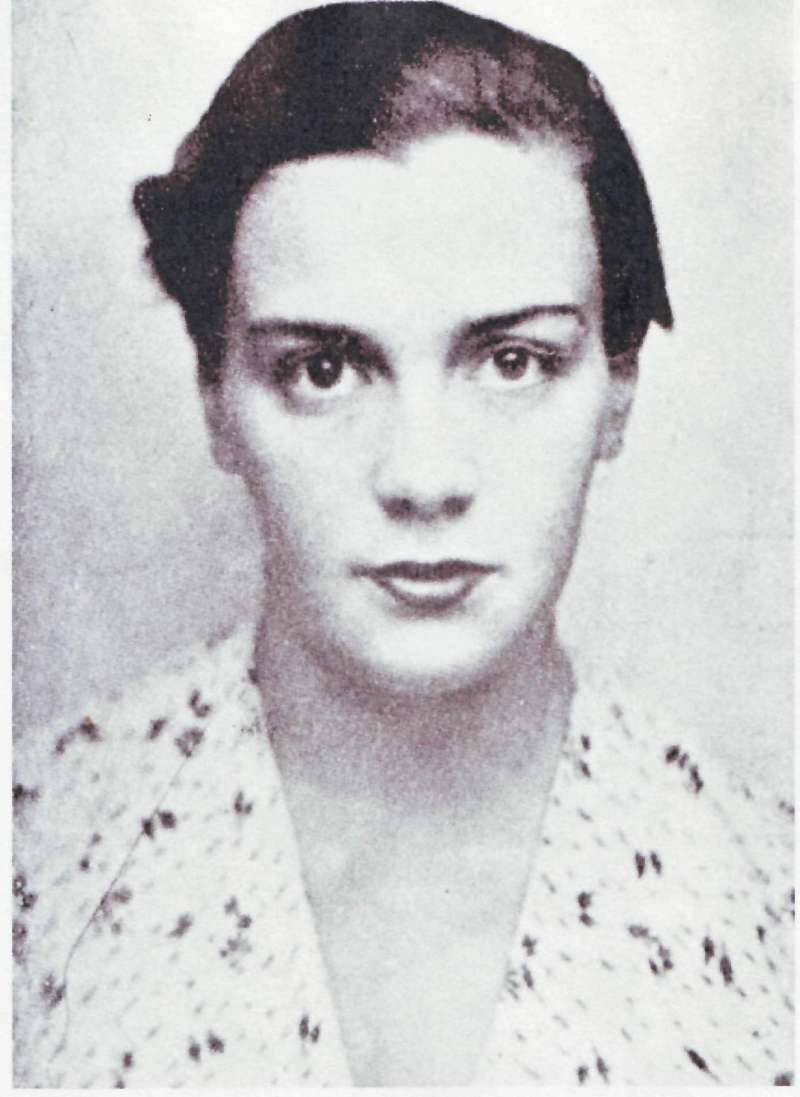 Princess Vera Obolenskaya
And later, already in 1944, the reconnaissance data on the deployment of German troops played an important role in the Allied airborne assault in Normandy.

Vigorous activity in the organization of the Faith Apollonovna Obolenskaya, the courage shown during the trials of her after her arrest, gained her posthumous fame. She showed everyone an example of heroism in the fight against fascism.

The Resistance Group and the underground printing were organized by the researchers of the Museum of Man in Paris, Boris Wilde and Anatoly Levitsky, with their comrades. The first action of this group was the distribution in Paris of a leaflet compiled by journalist Jean Texier, which contained “33 advice on how to behave in relation to the invaders, without diminishing their own dignity”.

All R. December 1940 of the year was issued a leaflet written by Boris Vladimirovich Wilde, calling for active resistance to the invaders. The word "resistance", first heard in this leaflet, gave the name to the entire patriotic movement in France during the war years. 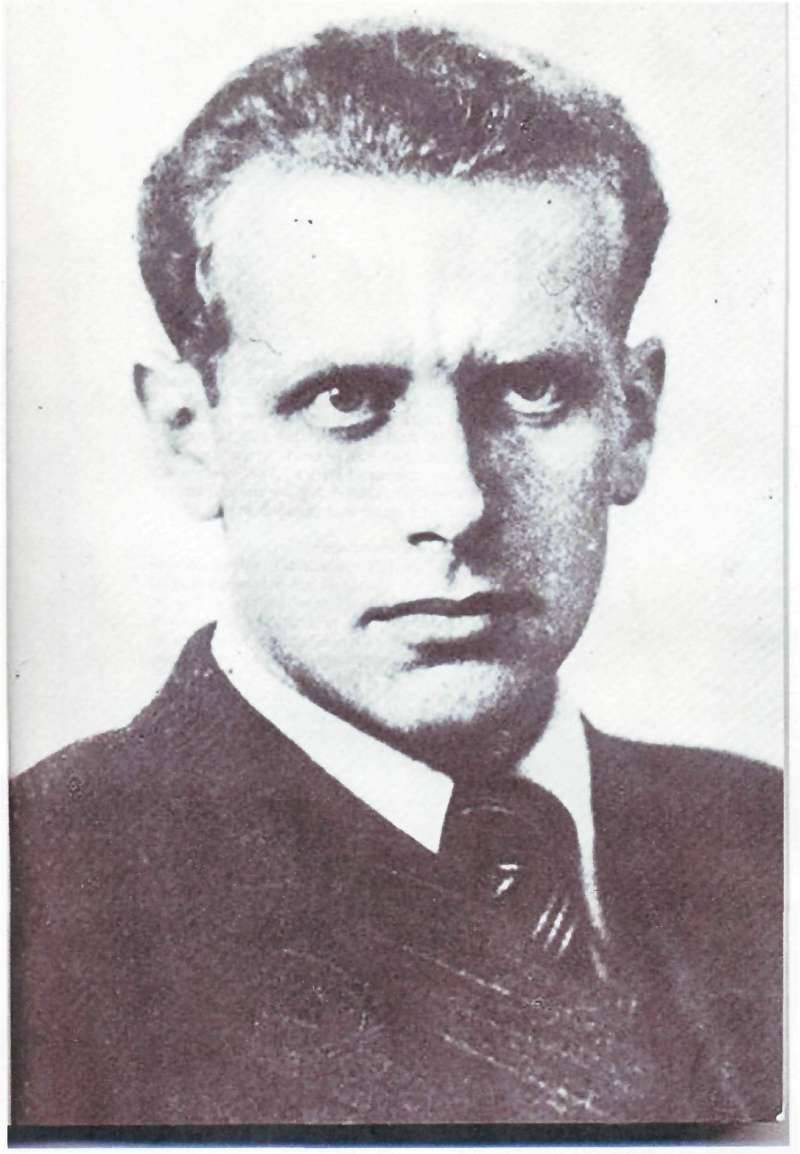 Boris Wilde
Members of this underground group also carried out reconnaissance missions received from London. For example, they were able to collect and transfer valuable information about the construction by the Hitlerites of an underground airfield near the city of Chartres and the submarine base in Saint-Nazaire.
According to the denunciation of the informant, who was able to infiltrate this group, all the underground workers were arrested. In February, 1942, Wilde, Levitsky and five others were shot.

Among the Russian emigrants who selflessly entered into the struggle against the occupiers were Princess Tamara Volkonskaya, Elizaveta Kuzmina-Karavaeva (mother Mary), Ariadna Scriabina (Sarra Knuth) and many others. For active participation in hostilities, Princess Volkonskaya was given the military rank of lieutenant of French internal forces.

During the occupation, Tamara Alekseevna lived near the town of Rufignac of the Dordogne department. From the moment of the appearance of partisan detachments consisting of Soviet fighters in this department, she began to actively help the partisans. Princess Volkonskaya treated and cared for the sick and wounded, returned dozens of Soviet and French fighters to the ranks of the Resistance. She distributed leaflets and proclamations, personally participated in partisan operations. 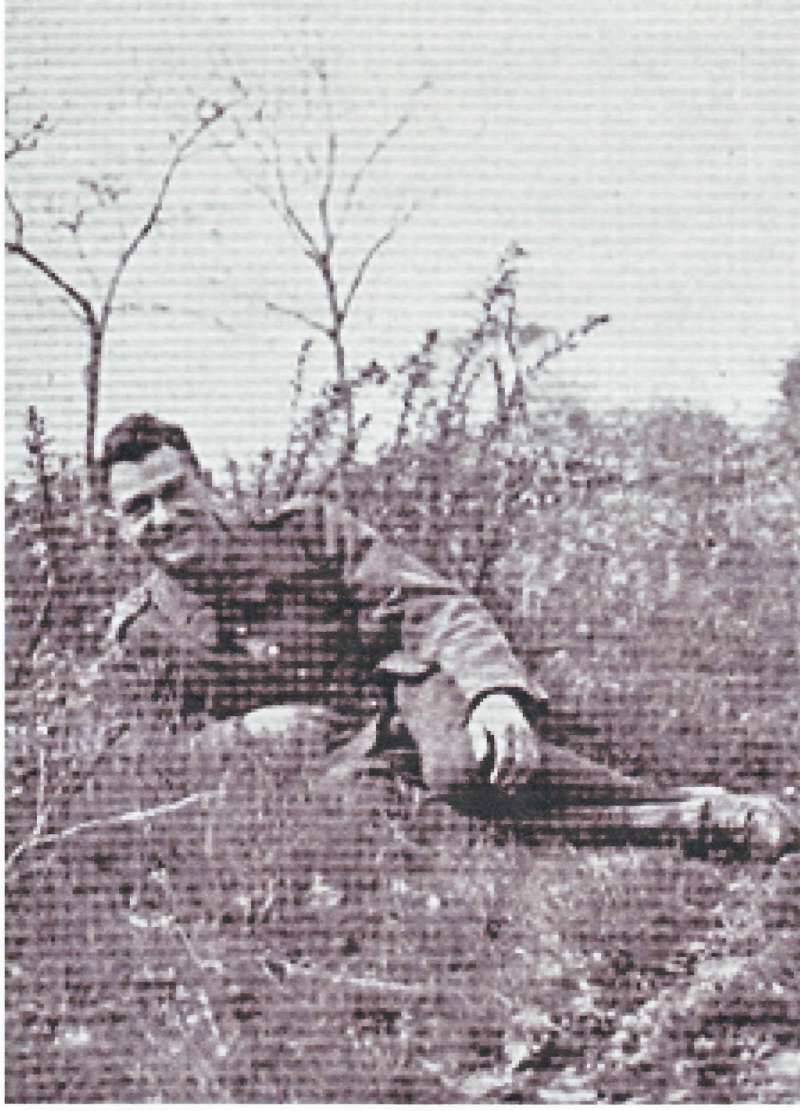 Anatoly Levitsky
Among the Soviet and French partisans, Tamara Alekseevna Volkonskaya was known as the Red Princess. Together with the partisan detachment she with weapons in the hands of participated in the battles for the liberation of cities in southwestern France. For active participation in the anti-fascist struggle in France, Tamara Volkonskaya was awarded the Order of the Patriotic War of the II degree and the Military Cross.

Elizaveta Yurievna Kuzmina-Karavaeva emigrated to France in 1920 year. In Paris, Elizabeth Yurievna creates the organization “Orthodox Affair,” whose activity was primarily aimed at helping compatriots in need. With the special blessing of Metropolitan Eulogius, he was ordained a nun under the name of Mother Mary.

After the occupation of France, mother Maria and her comrades in the “Orthodox case” sheltered in Paris Soviet prisoners of war who had escaped from a concentration camp, rescued Jewish children, helped Russian people who turned to her for help, gave shelter to everyone who was persecuted by the Gestapo.
Elizaveta Kuzmina-Karavaeva died in the Ravensbruck concentration camp 31 in March 1945. According to the stories, she went to the gas chamber instead of another prisoner - a young woman. Posthumously, Elizaveta Kuzmina-Karavaeva was awarded the Order of the Patriotic War.

Ariadna Alexandrovna Scriabin (Sarah Knuth), the daughter of a famous Russian composer, from the very beginning of the occupation was actively involved in the fight against the fascists and their accomplices. In July, 1944, a month before the liberation of France, Scriabin died in a skirmish with the Petenov gendarmes. In Toulouse, a memorial plaque was installed on the house where Ariadna Alexandrovna lived. She is posthumously awarded the French Military Cross and the Medal of Resistance.

The day of the beginning of the Great Patriotic War in the Russian émigré circles was declared the day of national mobilization. Many immigrants perceived participation in the anti-fascist movement as an opportunity to help the Motherland.

Starting from 1942, at least 125 thousand Soviet citizens were taken to concentration camps for forced labor in mines and mines in France from the USSR. For such a large number of prisoners in the territory of France, 39 concentration camps were built. 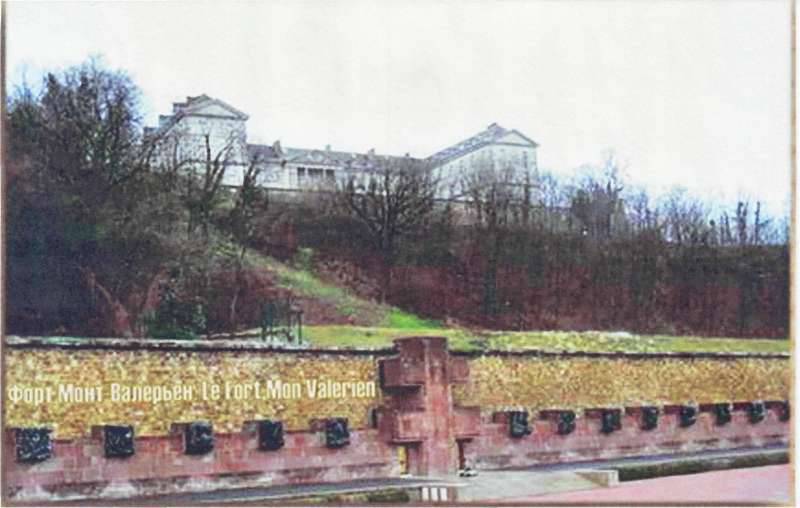 Wall of Fort Mont-Valerien, where 23 February 1942 was shot by Boris Wilde and Anatoly Levitsky and where 1941 of thousands of Resistance members were executed in 1942 – 4,5 years
One of the initiators of the anti-fascist struggle in the camps was the "Group of Soviet Patriots", created by Soviet prisoners of war in the Beaumont concentration camp (Pas-de-Calais department) in early October 1942. The “Group of Soviet Patriots” set itself the task of organizing acts of sabotage and sabotage at mines and agitation among prisoners. The “group ...” appealed to all citizens of the USSR who were in France, with an appeal calling them “... not to lose heart and not to lose hope for the victory of the Red Army over the fascist invaders, to hold high and not to lose the dignity of a citizen of the USSR, to use any opportunity to harm the enemy. "

The appeal of the “Group of Soviet Patriots” from the Beaumont camp was widespread in all camps for Soviet prisoners in the departments of Nord and Pas-de-Calais.

In the Beaumont concentration camp, an underground committee organized sabotage groups that incapacitated trucks, mining equipment, and mixed water into fuel. Later, prisoners of war went over to sabotage on railways. At night, the participants of the sabotage groups penetrated the camp’s territory through a previously prepared passage, unscrewing the rails and knocking them to the sides on 15 – 20, see
Echelons at high speed, loaded with coal, military equipment and ammunition, tore down the rails and descended from the embankment, which led to a halt in traffic on 5 – 7 days. The first collapse of the echelon of Soviet prisoners of war was timed to the 26 anniversary of the Great October Socialist Revolution. 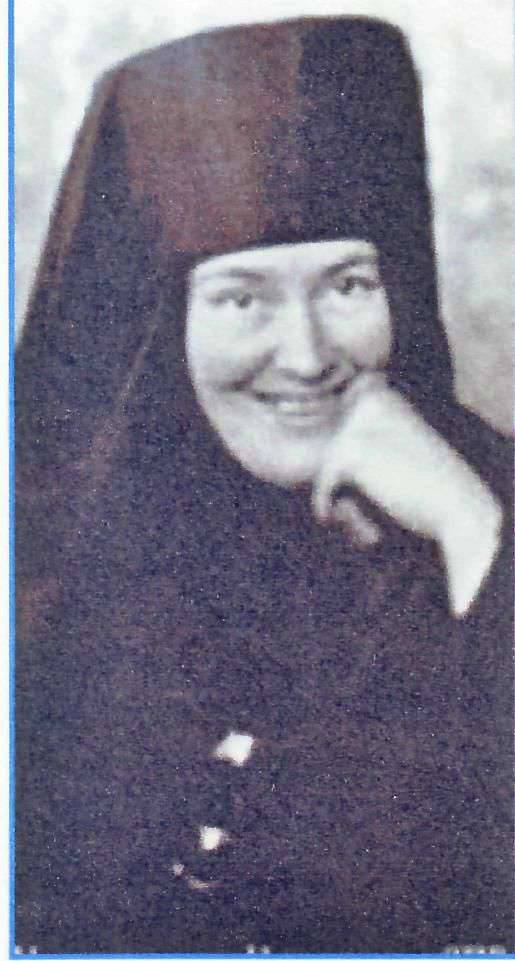 Elizaveta Yurievna Kuzmina-Karavaeva (mother Maria)
One of the sabotage groups led by Vasily Porik escaped from Beaumont concentration camp. Soon a small mobile partisan detachment was organized, which successfully carried out bold, bold operations. For the head of Vasily Porik, the Germans announced a reward of one million francs. In one of the clashes, Vasily Porik was wounded, captured and imprisoned in Saint-Nicaise prison.

For 8 days he courageously endured the torture and mockery of the fascists. Upon learning at the next interrogation that he had two days left to live, Vasily Porik decided to take the last battle. In the chamber, he pulled a long nail out of a wooden lattice, with a cry he drew attention to himself and killed the guard who had come to him with his dagger, which he managed to take away. With the help of a dagger, he widened the gap in the window and, tearing up the linen and tying it, made an escape.

Reporting about the escape of Pouric from prison, French newspapers were full of headlines: “Escape, which the history of Saint-Nicaisez did not know”, “Of those casemates, only the devil could have escaped”. Glory Porica grew with each day, new people came to the squad. Surprised by the resourcefulness and boldness of the Soviet officer, the miners of the department of Pas-de-Calais said about him: "Two hundred such Porikov - and there would be no fascists in France." 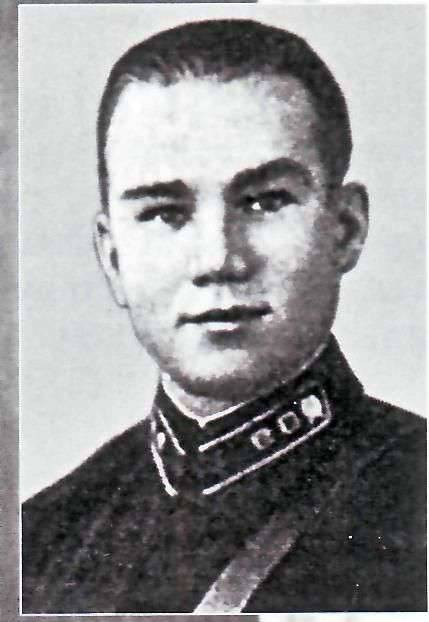 Hero of the Soviet Union Vasily Porik
Over the course of active operations, more than 800 fascists were destroyed by the Poric squadron, 11 echelons were derailed, 2 railway bridges were blown up, 14 vehicles were burned, a large number of weapons were seized.

22 July 1944 of the year in one of the unequal battles Vasily Porik was captured and shot. After 20 years, in 1964, he was awarded the title Hero of the Soviet Union.

In total, during the war years in France, there were dozens of partisan detachments consisting of Russian émigrés and Soviet soldiers who had escaped from captivity.

But about it - next time.

Ctrl Enter
Noticed oshЫbku Highlight text and press. Ctrl + Enter
We are
Rivers of blood on the land of Bengalis. How one of the most populated states of the world fought for independenceWhite emigration. Foreign higher military-scientific courses under the guidance of Professor Lieutenant-General N.N. Golovina
5 comments
Information
Dear reader, to leave comments on the publication, you must to register.