February 11 2016
41
After the announcement of the resignation of the Minister of Economic (what? ..) of the development of Ukraine Aivaras Abromavicius in the Maidan Kingdom, they realized that something had gone wrong. Understood this, of course, before, but attempts to make good mines with a bad game somehow somehow rolled in the “Square”. And they rolled for the simple reason that the main sponsors, by definition, could not recognize that the Maidan Project suffered a fiasco.


In order to continue to cover the bad game with an attempt to make a good mine, in Kiev, literally all the tentacles tried to cling to Abromavicius and leave him as a Lithuanian “wedding” doll on the hood of the smoking and stubbornly non-starting Ukrainian economy. However, Abromavicius was adamant and, not only did he declare his desire to leave his post, he also accused the Maidan authorities of total corruption. His phrase that he is not going to act as a cover for this very corruption, may well turn into a winged one for today's Ukraine.

Abromavicius did not have time to collect the suitcases and find the second passport in the desk drawer, as he was summoned to the National Anti-Corruption Bureau of Ukraine (desk worse than Horns and Hooves) with a proposal to testify. Like, well, tell us, hot Lithuanian guy, who did you decide to poke into the corrupt cesspool? BUT?!

The trouble for the Ukrainian Maidan authorities is that all these upheavals with the Minister of Economic Development take place in full view of foreign countries, in front of whom Gopak dances Pedro Poroshenko in an acute attack of wanting to get another creditor. And at first, a dozen ambassadors, including ambassadors of the most solvent countries of the EU, expressed their displeasure at the fact that henchmen from the Yaceyuk Cabinet fled, and then the International Monetary Fund joined in the matter. But this is the very fund that less than two months ago, for the sake of Ukrainian puppets, you know who decided to take unprecedented measures, declaring the continuation of the crediting program of the country's economy, even if it enters the default stage.

Apparently, official Kiev considered that tse was a great peremoga, and therefore not only decided to “dynamite” with the return of the debt to Russia, but also to spit from the high bell tower of the UOC Kiev, of course, the patriarchate on all those obligations for economic reform that had previously been given. It is worth recalling that among the commitments there was an indispensable condition for reducing spending on social programs with the simultaneous introduction of a program to raise the retirement age right away for 5 years for both men and women, as well as bringing energy tariffs to the European level.
Realizing that today the implementation of such reforms is identically equal to political suicide, in Kiev they decided to simply “forget” about their obligations to the IMF, sluggishly trying to explain what, they say, we are defending you here from Putin and the bloodthirsty Russian barbarians, We put some conditions.

The word "Putin" to the West, of course, magically, but this time on individual representatives of the IMF, it did not work ... Thus, the managing director of the International Monetary Fund Christine Lagarde said that Ukraine does not show an adequate level of progress in carrying out economic reforms and also does not lead an effective fight against corruption, and therefore (Poroshenko and Yatsenyuk bite their fists), the IMF is ready to suspend the lending program of the Ukrainian economy.

RIA News leads translation statements by Christine Lagarde:
In the absence of noticeable efforts to give new impetus to reforms in government and the fight against corruption, it is difficult to imagine that the IMF-supported program will continue in the future and will be successful. It is vital that the actions of the leaders of Ukraine now return the state to the encouraging path of reform.

The most offensive for Don Pedro is that just six months ago, the same Christine Lagarde, in an interview with leading news agencies, stated the following: “Ukraine demonstrates an outstanding desire to move along the path of reform.” It turns out that by now either the desire has ended, or the reform rails did lead along a dead-end route - where locomotives are usually disassembled for parts, and the cars with the contents “resubmitted” to other trains. There is one more explanation: someone in Ukraine decided that he was not ready to share Ukrainian assets with foreign “friends”, but was ready to fully exploit the oligarchic formula “Hands off my goodness!” Who was overwhelmed by this good - for Ukrainian oligarchs the question is not worth it. At the same time, in terms of sharing with “friends,” the toad is strangling ... It is precisely this that Abromavicius could hint at transparently, and that is why Christine Lagarde, who herself in the IMF on bird rights, suddenly became disillusioned with the Ukrainian reformist impulse. 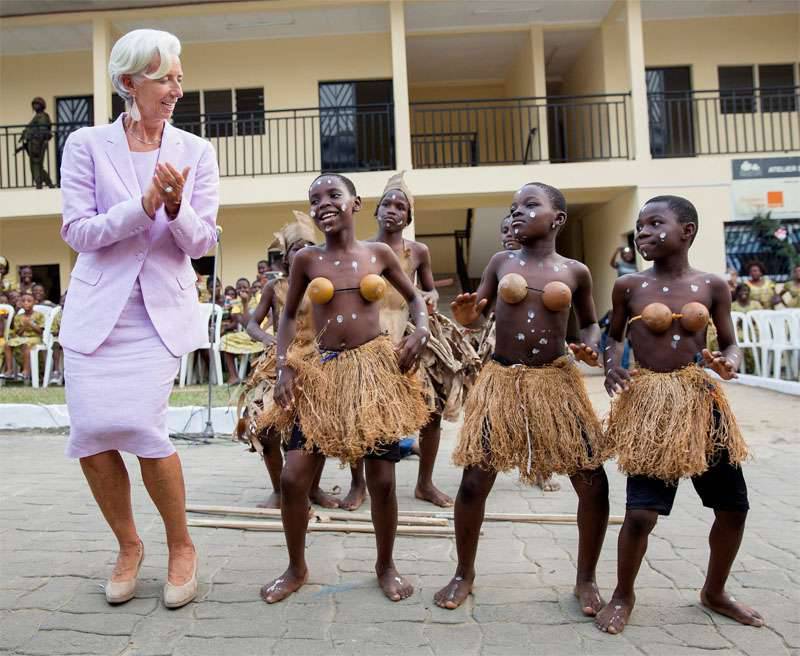 By the way, the other day the Russian authorities announced that they would support the candidacy of Ms. Lagarde for a new term as the IMF Managing Director. Interfax Quotes Russian Finance Minister Anton Siluanov:
As a manager at the IMF for the Russian Federation, I support the candidacy of Christine Lagarde in connection with her nomination for a second term as director of the fund. I count on the continuation of a constructive and open dialogue with the IMF.

And this statement gave occasion to Maidan "political analysts" to announce that Lagard with Russia decided to "make a deal." In general, Lagarde, who announced the possibility of suspending lending to the Ukrainian economy, was announced a new, excuse me, application and “Kremlin agent”. Mrs. Lagarde has been using the term “representatives of the press service” for now, and in Kiev they are cutting off Joe Biden’s phone with the hope of finding out: where are the promised events? ..

Ctrl Enter
Noticed oshЫbku Highlight text and press. Ctrl + Enter
We are
Situational analysis of the death of the MH17 flight (Malaysian Boeing 777), made on the basis of engineering analysis from 15.08.2014Syria: Americans scare themselves, and Asma Asad buys chairs
41 comment
Information
Dear reader, to leave comments on the publication, you must to register.