February 11 2016
32
The Russian defense industry continues to create new equipment for the armed forces, using existing experience and best practices. Thus, the concern “Tractor Plants” is testing a promising tracked transporter TM140 “Arctic”, which in the foreseeable future may enter the Arctic units of the armed forces. This machine was developed on the basis of existing civilian technology and is now proposed for use in the army. At present, the prototype of the new machine is being tested, the results of which will determine the further fate of the project.


The project of the TM140 “Arktika” track conveyor in a variant for use in polar latitudes was developed by the concern “Tractor Plants” in an initiative manner. In order to accelerate the design work, it was decided to take the existing machine as the basis for the new project. The base for the "Arctic" was the civilian multi-purpose tracked carrier CHETRA TM140. Machines of this type are manufactured by Kurganmashzavod and are supplied to various customers. The relatively high characteristics of the TM140 type civilian vehicle made it possible to develop on its base a conveyor for troops, distinguished by certain design features, primarily related to the intended use.

The task of the prospective transporter is to transport personnel and cargo in various areas, including the Arctic, for which some changes have been made to the design of the vehicle. The possibility of carriage of goods inside the cabin, as well as towing various trailers with a payload. Thanks to the use of a tracked undercarriage with high performance TM140, the “Arctic” can move on soils with a weak bearing capacity, as well as on snow. In addition, it is possible to cross the water obstacles by swimming. The car floats without additional training. 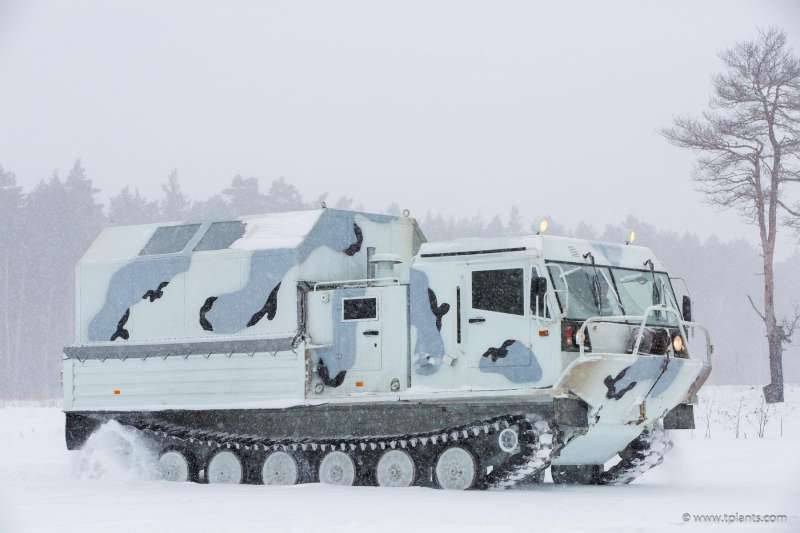 The characteristics of the transporter for the troops have not yet been announced, but the main parameters of its civilian prototype are known. Probably, the main indicators TM140 in the civilian and military arctic version are either the same or have minimal differences. For a general idea of ​​the characteristics of such equipment, consider the civilian tracked all-terrain vehicle CHETRA TM140.

A multi-purpose vehicle of this type is a tracked vehicle with a cargo platform on which modules of various purposes can be mounted: from the passenger cabin to special equipment. The main element of the all-terrain vehicle is a tracked chassis, on the body of which all the other units are mounted. Thus, in the front of the vehicle, a cockpit is installed, the engine compartment is provided behind it. The aft part of the chassis serves as a place to install special equipment designed to solve the tasks.

The mobility of the TM140 machine is provided by the JMZ-236B-2 diesel engine with an 250 horsepower, which is additionally equipped with a gas turbine supercharger. The all-terrain vehicle receives a hydromechanical transmission, through which the engine torque is transmitted to the stern driving wheels. The transmission includes a six-speed gearbox with electro-hydraulic shifting. In addition, the transmission has a power take-off shaft, with which it is proposed to ensure the operation of additional equipment on the aft load platform. Up to 200 hp can be transmitted to the power take-off shaft.

An important feature of the used power plant is its placement. The engine and part of the transmission elements are installed behind the cockpit inside a fairly large casing. The dimensions of this unit are selected in such a way that the repairman could climb inside and carry out all maintenance operations on the power plant without going beyond its casing. For access inside on the sides there are two doors. Inside the casing there are lighting and heating means ensuring comfortable work in any climatic conditions. 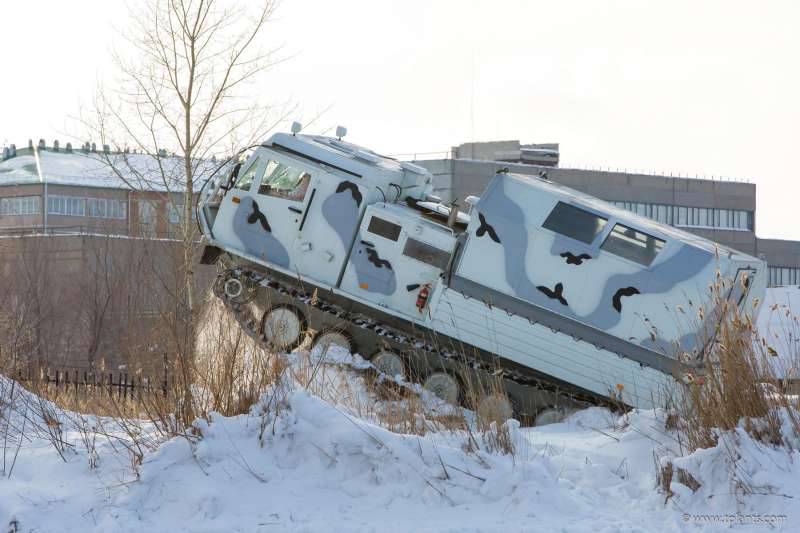 TM140 has a tracked undercarriage adapted for driving on low load bearing soils. To do this, the machine is equipped with a caterpillar width 800 mm with rubber-metal hinges, characterized by a high resource. The weight of the all-terrain vehicle is distributed among the tracks by means of six road wheels with an individual torsion bar suspension on each side. The guide wheel is located in front of the side, the leading - in the stern. Due to the use of a similar undercarriage, the average specific pressure on the ground is 0,22 kgf / sq. Cm.

In the aft part of the conveyor hull there is a cargo platform of size 3575х2700 mm, on which various special equipment or a module for transporting people can be mounted. In the latter case, a van is installed on the platform mounts, similar to the standard KUNG. This unit is a sealed cabin with insulation, ventilation and heater. Seven seats are provided for passengers. In addition, it is possible to organize three beds. The design and equipment of the module provide a comfortable trip over long distances.

The all-terrain vehicle TM140 can carry up to 3500 kg of cargo on the platform. At the same time afloat, the maximum carrying capacity increases to 4000 kg, and when using the passenger module, the total weight of people and cargo should not exceed 500 kg.

The machine has a total length of 7,8 m, a width of 3,11 m and a height of 3,1 m. Clearance is provided on the order of 450 mm, which provides high permeability on different surfaces.

Declared maximum speed on the highway at the level of 45 km / h. When crossing water obstacles, the movement is carried out by rewinding the tracks. The maximum speed does not exceed 4 km / h. By installing additional fuel tanks, the total amount of fuel can be increased to 830 l, after which the cruising range is 800 km. 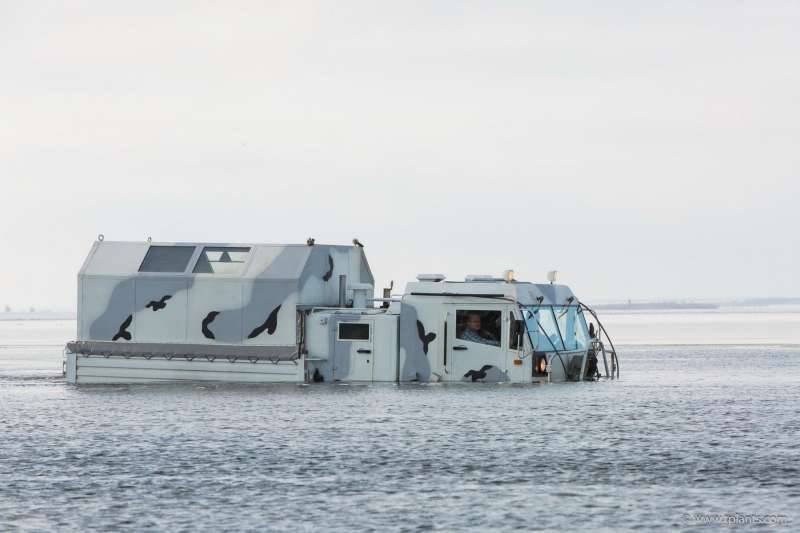 The development project for the modernization of the base all-terrain vehicle for use in the Arctic ended last year. In December, the 2015 th prototype of the TM140 “Arctic” machine was first shown at the international forum “The Arctic: Present and Future”. Then the company-developer revealed some details of the new project and announced the main directions of modernization of the existing technology.

In a modified version, the tracked carrier can carry up to eight passengers or the corresponding cargo. Provides for the use of modern systems to create and maintain the required microclimate in habitable compartments, by which comfortable conditions are provided in all ranges of permissible external temperatures. The isolation of habitable compartments from the engine and transmission is preserved, which allowed the vibrations to remain at the same low level. The possibility of organizing sleeping places for the crew or passengers also remained. Thus, after modernization, the habitable compartments of the all-terrain vehicle retain all the positive features of the predecessor, and also receive some new advantages.

In the course of the modernization, the construction of the conveyor was strengthened, and a new six-speed transmission of the “Synthesis” type was used. This made it possible to maintain the mobility of the machine at the same level, as well as to increase the carrying capacity to 4 tons. Also, the engine preheating system underwent refinement, and the existing brake system was supplemented with a new one. In the frontal part of the chassis is now installed winch for self-pulling or evacuation of other machines.

The modernized CHETRA TM140 “Arctic” conveyor, like its predecessor, can be used as a vehicle for transporting people or goods, as well as receive special equipment for other tasks. In addition, in December, it was announced that the all-terrain vehicle could be improved for use in the army. In the military version, the cabin and the passenger module must be equipped with anti-bullet armor, and a remote-controlled combat module with machine-gun armament can be mounted on the roof. Also for combat use is offered a new three-color camouflage color, designed to impede the detection of technology on the Arctic landscape. 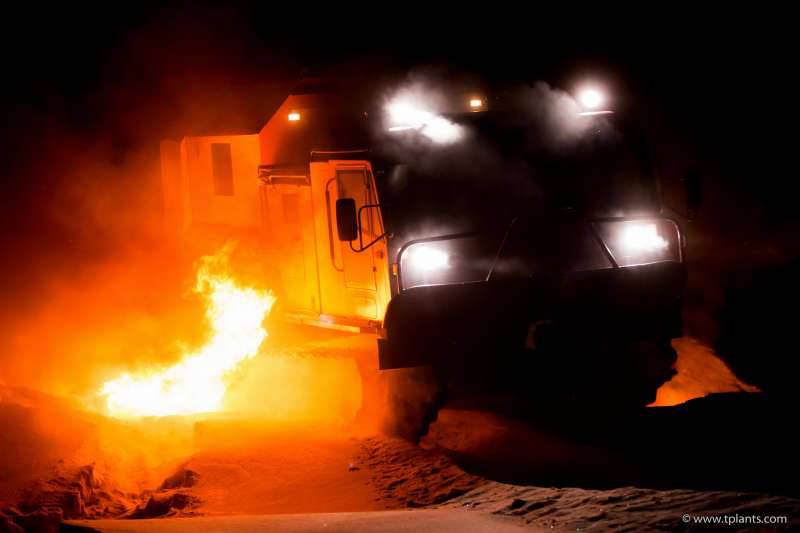 As it follows from the available data, the prototype of the modernized tracked all-terrain vehicle TM140 Arktika, built by the Kurganmashzavod enterprise, is currently undergoing various tests, within which the calculated characteristics are confirmed and the identified deficiencies are eliminated. Thus, in the foreseeable future, a new machine can reach mass production, including in the interests of the armed forces.

A few days ago, the BMPD blog published a series of photos from running trials of a promising tracked vehicle. These photos were taken in early February, when Kurganmashzavod received journalists from the Zvezda TV channel. Demonstration test runs were performed as part of the filming of the TV program “Military Acceptance”, the new release of which will be devoted to domestic all-terrain vehicles, including TM140 “Arctic”. The program will air on Sunday 14 February in 9: 55. It should be expected that the TV channel "Star" will reveal new details of a promising and promising project.

Ctrl Enter
Noticed oshЫbku Highlight text and press. Ctrl + Enter
We are
All-terrain vehicle "Burlak": a car for a trip to the North PoleAmerican all-terrain vehicle for Antarctica "Snow Cruiser" (Snow Cruiser)
32 comments
Information
Dear reader, to leave comments on the publication, you must to register.