MH-17. Even the Dutch began to suspect something ...

February 11 2016
139
The other day, the families of the dead passengers of the Malaysian Boeing shot down over the Donbas decided to turn to the Netherlands investigation commission (the so-called CTIVD service), Ukraine and Russia with the requirement to publish the radar data, which, according to relatives, have remained locked up for them . The Dutch CTIVD and official Kiev routinely pretended that the demands from the relatives of the victims of the plane crash were not heard.


Russia again became the only country whose official representative responded to the demands. This official representative was the deputy head of Rosaviation, Oleg Storchevoy, who, expressing his condolences once again to the families of the victims, said that they themselves were surprised at attempts to delay the publication of the Dutch CTIVD radar data. The fact is that Russia was the first to transfer to the Dutch experts all the radar materials available to our specialists, which shed light on the causes of the tragedy and allow us to give quite definite answers to questions about the main culprit of the MH-17 disaster. The Dutch investigators, having received a set of data from Russia, actually received the information they received, stating that its “premature” publication could “adversely affect the course of the investigation.” Apparently, the relatives of the victims of the catastrophe, before Oleg Storchev’s speech, were informed by the very same Netherlands investigation team that it had no data provided by Russia, which was the reason for putting forward well-founded requirements.

The statement of Oleg Storchevoy in the week published RIA News:
We officially declare that the Russian side, back in August 2014 of the year, that is, immediately after the tragedy, transmitted to the Netherlands Security Council (SCN) all available primary radar data that recorded the flight of flight MH-17. Moreover, Russia still stores these data and is ready to resubmit them to the appropriate authorized organizations. As for satellite imagery, we would like to note that in the very first days after the plane crash, the Russian Federation made public all of its satellite data. In particular, they confirm the movement and increased activity of Ukrainian Buk-type anti-aircraft missile systems directly in the zone of armed conflict in eastern Ukraine on the eve of the tragedy. 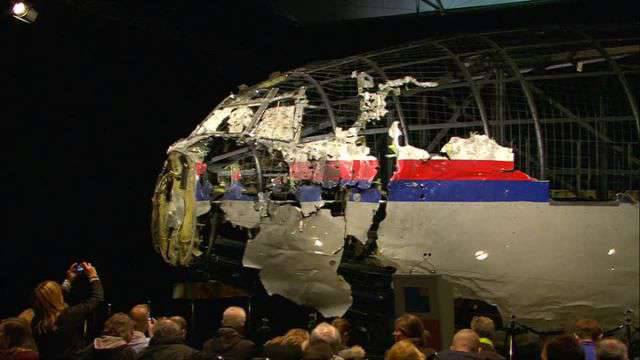 The deputy head of Rosavitsiya stated that Russia finds the Dutch investigation to be extremely closed and biased, not relying on a large amount of technical and technological information that is at the disposal of a group of investigators involved in identifying those responsible for the Boeing-777 crash of a Malaysian airline. Oleg Storchevoy called on CTIVD representatives to publish the radar data received from the Russian Federation, and also called for the publication of existing data from the United States and Ukraine. “Or representatives (of these countries) should recognize that they have no such data for some reason,” the representative of the Federal Air Transport Agency added.

It turns out that the Russian representative directly pointed out to the relatives of the victims of the plane crash on those who really conceal information obtained by means of objective control and able to give answers to all questions about the tragedy of MH-17. American satellite images that are still not published by the States are one example of criminal silence.

Against this background, attention is drawn to what happened the other day in the Netherlands. Perhaps, for the first time since the crash of a Malaysian airliner in the country of mills and tulips, sensible people were identified who began to wonder why, “if everything is clear for a long time,” the investigation committee is delaying the moment of the final publication of conclusions? Indeed, if “mega-experts” are collected in the commission, at whose disposal there is not only time, but also a full range of data on the flight of the aircraft, the work of dispatching services, etc. etc., then, as they say in the West: "Wye ?!"

Why the commission pulls, - not only the relatives of the victims, but also the mass media, as well as (oh, horror - for the investigative commission), the Dutch parliamentarians are wondering.

On Twitter, a man named Peter Omtsigt (Pieter Omtzigt) - and this, for a moment, is a member of the Dutch parliament and a member of the Netherlands commission at the Council of Europe - amid claims that Putin was not through the help of Rosaviation officials, and not through the press, and writing directly to the addresses of the relatives of the victims of the plane crash to answer their demands, literally this:

The head of the CTIVD service (the one that conducts the investigation - author's note) confirms: only Ukraine 17 July in the eastern regions (in the region attacking "Boeing") had combat-capable complexes "Buk".

Omtzigt made such a record from the meeting room, where at that moment the hearings on the case of the downed airliner took place.

This is a screen tweet (the Omtzigt tweet itself can be found in the Dutch deputy’s microblog in January 22 notes from 2016 of the year - link):

The same Omtsigt writes: the Dutch special services do not have any information that the “Buk” could be imported from the territory of Russia. And the Dutch deputy precisely this information was asked to comment on his subscribers in the social network.

In general, despite attacks on the Russian Federation in the style of “Putin, it would be better for him to write a letter with a report on radar data to the relatives of the victims”, the deputy Omtsigt is categorical: a) the Ukrainian troops are the only force that possessed an efficient “Buk” on the day of the attack on Boeing; b) the Dutch special services do not confirm the materials that the “Beech” to 17 July 2014, allegedly could deliver from the territory of Russia. In this case, the Omtzigt in the first case is based on the CTIVD intra-parliamentary report, and in the second - on the statement of the Dutch special services.

Friysen writes that in Kiev they said that the representatives of the Security Service of the Netherlands never requested Ukraine has radar data on the MH-17 crash case. When in Holland they made a fuss about this, exclaiming: “that is, how was it not requested?”, They suddenly stated in Kiev that the Minister of Infrastructure, who, by the way, spoke Dutch, “did not understand so well”. How was it necessary to understand the minister, who, before becoming a minister, had internship in Delft, Kiev did not explain ...

As a result, it turned out that Kiev nevertheless provided the Dutch Security Council with information, but this information was (attention!) From 23 July 2014. Well, yes ... The Dutch Security Council didn’t really request the radar data from 23 July 2014 from Kiev, because it’s these data that are not needed for it - a blow to the Boeing July 17 was delivered ... And moreover One confusion:

Kiev previously reported that its radars in the Donbass did not work throughout July - they say, we simply cannot provide the radar data of interest to you;

but now it turns out that 23 July radars suddenly earned ... So maybe they worked on the 17 number, just Kiev, for Dutch reasons already understandable, is silent.

Such a frank juggling of the facts caused a storm of indignation at the same Friisen and other representatives of the Dutch press, in addition, familiarized with the tweet of the deputy Omtzigt about the Ukrainian capable "Bukakh", which the Ukrainian military had in the MH-17 strike zone.

The same journalist (Friysen) writes (better late than never ...) that Ukraine did not warn European colleagues about the risks of flying over the eastern regions of the country. Earlier in Kiev, they said that she seemed to be “trying to warn”, but again this categorical Omtzigt. It turned out that the Dutch deputy had submitted requests to the airline and dispatching services of countries that collaborated in terms of air travel with Ukraine, and found that no warnings from Kiev about the insecurity of flights over the Donbas had been received. Eric Friysen writes that this, firstly, smacks of negligence, and, secondly, Ukraine’s attempt to hide the truth about the real culprit of the MH-17 crash.

Ctrl Enter
Noticed oshЫbku Highlight text and press. Ctrl + Enter
We are
Results of the weekSituational analysis of the death of the MH17 flight (Malaysian Boeing 777), made on the basis of engineering analysis from 15.08.2014
139 comments
Information
Dear reader, to leave comments on the publication, you must to register.