February 11 2016
57
Henry Kissinger, a former national security adviser and former US secretary of state, recently met with Vladimir Putin, as well as Bavaria’s prime minister, Horst Seehofer. The other day in the influential edition of The National Interest a large article by Kissinger appeared in which the former politician set out his own vision of Russian-American relations and called on Washington and Moscow to engage in constant dialogue. The expert spoke in favor of the dialogue that will “merge” the future of the United States and the Russian Federation. 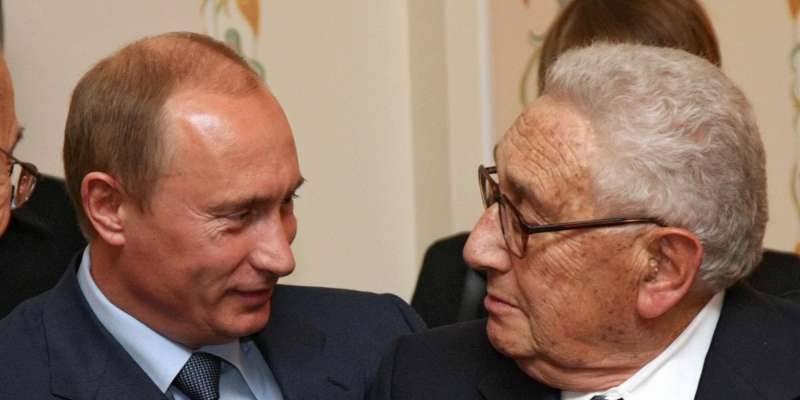 Former US Secretary of State Henry Kissinger in The National Interest outlined his vision of Russian-American relations (the source of Kissinger’s article is "InoSMI").

Ex-Secretary of State recalled that relations between the United States and the Russian Federation "are much worse today than ten years ago." They are probably even “in the worst condition ever since the end of the Cold War.” The confidence of both sides has weakened, and confrontation has come to replace cooperation.

In the past, at the end of the Cold War, the Americans hoped that a period of relaxation of tension would lead to fruitful cooperation on world problems. So thinks Kissinger. Maintain strategic stability and prevent proliferation weapons mass destruction has become imperative. The prospects for trade and investment have also opened, and cooperation in the field of energy has come to the first place. However, the construction of a state policy was predetermined by the power of “global shocks,” the ex-secretary of state believes. He recalls that Russia "carried out military operations in the Caucasus in the 2008 year and in the Ukraine in the 2014-m." There was a "feeling of alienation." At the same time, the former partners put "all the blame" on each other, and in addition, "each side has a tendency to demonize if not the other country, then its leaders."

In Russia, the corresponding feelings, Kissinger believes, are amplified by memories of the first post-Soviet decade, when Russia was experiencing a sharp crisis, and the United States, on the contrary, was in a period of economic growth.

Kissinger believes that one of the strongest differences in the perception of the United States and the Russian Federation historical representations. If the United States interpreted the end of the Cold War as a reaffirmation of America's traditional belief in the inevitable triumph of democracy, then Russia, with its complex history, had its own security priority.

“When the border of security moves from the Elbe a half thousand kilometers to the east towards Moscow, a strategic component inevitably appears in the Russian view of the world order,” Kissinger writes. “The task of our time is to merge these two dimensions, geopolitical and legal, into a single coherent concept.”

So how does America cooperate with Russia? After all, Russia does not share all its values, being at the same time an “indispensable component of the world order”? And how will Russia defend its security interests? Kissinger believes that his goal is “to promote efforts to find these answers.”

Many commentators, both Russian and American, today reject the possibility of cooperation between the United States and Russia. Kissinger opposes such an unambiguous statement of the question.

“The last 70 years,” he writes, “I somehow dealt with Russian-American relations. I was present at the decision-making centers when the level of anxiety increased, and at joint celebrations in honor of diplomatic achievements. Our countries and the nations of the world need better prospects. ”

“I advocate a dialogue that will merge our future together, and will not aggravate our conflicts - and I believe that it is possible,” the former politician said. “For this, mutual respect of both sides for each other’s vital values ​​and interests is necessary.”

At the same time, he notes that the Obama administration “for the time left for it” will not solve these tasks. Nevertheless, their decision “cannot be postponed in favor of American domestic policy.”

“These tasks can be accomplished only in this case,” Kissinger points out, “if Washington and Moscow, the White House and the Kremlin are ready to step over their grievances and discontent, they stop thinking that they are being deceived and persecuted, and will respond to those large-scale challenges threaten our countries in the coming years. "

Kissinger's article caused a variety of responses in the world press.

Sevil Nuriev in Star gazete (Turkey, source of translation - "InoSMI") in many respects stands with Kissinger.

In her opinion, the “idea to put Kissinger into the game” began to seem reasonable.

Previously, Mr. Kissinger has repeatedly warned the United States on the issue of Ukraine, saying that it is necessary to be cautious about the issue of membership of this state in NATO.

“Putin is not a leader who loves and knows how to make concessions. Since the American state also knows this, it believes that such a move with the participation of Kissinger will be beneficial, ”the journalist writes.

According to Kissinger, he is a prominent specialist “in matters of shadow governments,” and the inclusion of him in the game, the author believes, is designed to help measure the degree of nuclear threat from the United States and Russia. In addition, the idea of ​​"you do not know what to expect from Putin" has become obsessive in the current American administration.

Meanwhile, the main thing is different: the probability is quite high that America, not Russia, will make concessions. There is a historical example: in the last century there was a similar confrontation in the period of Kennedy and Khrushchev. Kennedy's step at that time looked like a concession, but he saved the world from a nuclear catastrophe.

The content of the Kissinger and Putin talks can be judged by the actions that Russia and America will take in the near future, the journalist said.

The reaction to the inclusion of Russian experts in Kissinger’s “game” is also well known.

Political analyst Sergei Chernyakhovsky in the newspaper "News" writes: “Kissinger has always fought with the USSR, but not against the USSR. He always defended the principles of political realism. And political realism is a statement of real goals and an action not in accordance with one or another idealistic norms, but an orientation towards means that are good for ensuring urgent tasks. ”

The expert recalls that Henry Kissinger "became the father of detente because the United States could no longer openly confront the USSR." “A little more,” the author points out, “and America, perhaps, would have fallen, as it had fallen, abandoning the struggle, the USSR in 20 years. The United States needed a break, and even more - a change in the format of the struggle. ”

And yet, according to the political scientist, Kissinger was afraid of the collapse of the USSR and his departure from Europe. He understood: the United States is not ready to assume the role of a single world center of power: in this case, they will try to take on more than they can carry.

And “if this political heavyweight comes to a state regarding which the policy of his own country is stalled, it looks like a kind of invitation to dialogue, a hint of a new“ reset ”, the expert summarizes.

It is difficult to say how likely the new “reset” in relations between the United States and the Russian Federation is with such dissimilar positions of “partners” in Ukraine and Syria, as well as Moscow’s complete rejection of the thesis of “exclusivity” of America, which is constantly repeated by both the State Department and President Obama. The White House continues to insist on the special role of the United States in world politics, appealing to liberal “values” and the need for “democratic” changes throughout the world. This inflexible position of the current Washington is at odds with Kissinger’s confidence in the US’s inability to steer the entire planet.

It’s hard to imagine an American president (with the possible exception of the former candidate for the 2012 election of Mr. Merlin Miller), who would abandon the strategic goal of US domination throughout the world and cover all external military bases. Such a person would never have entered the Oval Office. Donald Trump, of course, wants to be friends with Russia verbally, but in reality this friendship may most likely turn out to be something like “peregruzka” - a number that the trio of Obama, H. Clinton and Ambassador McFaul played on the international stage.

Observed and commented on Oleg Chuvakin
- especially for topwar.ru
Ctrl Enter
Noticed oshЫbku Highlight text and press. Ctrl + Enter
We are
Project "ZZ". Seventy percent of the inflatable dollRegime change in the Russian Federation? Why Washington wants to end Vladimir Putin (“Global Research”, Canada)
57 comments
Information
Dear reader, to leave comments on the publication, you must to register.