Between sky and water


Veterans of our fleet and shipbuilders are proud to recall the turmoil in NATO caused by the Soviet ekranoplanes - uncontrolled air defense systems, low-flying, all-weather broad-based vehicles: missile carriers, landing, rescue, cargo, passenger ... In the XNUMXst century, these devices are born again in our country.

The first serious developments of flying super vehicles in the USSR date back to the early 60s. The pioneers were the Gorky Central Design Bureau for Hydrofoil Ships (TsKB by SPK) led by Rostislav Alekseev and Taganrog aviation KB led by Robert Bartini. Scientists made the so-called screen effect work — the lift of the incoming air flow, when the “wind” from the soaring wing reaches the surface of the earth or water, is reflected and manages to return back to the wing, increasing the pressure under it and providing flight. A start in the life of the new development was given by the then Secretary of the CPSU Central Committee (future Minister of Defense of the USSR) Dmitry Ustinov and Navy Commander-in-Chief Sergei Gorshkov.

Special flight test laboratories were organized on the Volga and the Caspian, and by the middle of the 60-s they managed to build a unique, the largest for those times aircraft - KM ekranoplan (prototype ship, however, Western intelligence agencies decoded this abbreviation as a Caspian monster) . This hundred-meter hero with a wingspan of 37,6 meter once flew into the air with a take-off weight of 544 tons, setting a world record.

“Valery Polovinkin:“ The main advantage of an airplane is the stealth. Even from the satellite it is difficult to detect it, because it has a blurred outline. And it is very correct that at last they paid attention to the construction of WIG "
In 1972, the first serial military “Orlyonok” screentop vehicle was assembled, intended for the transfer of amphibious assault forces to a range of 1500 kilometers. According to data from open sources, it was planned to build more than two dozen of such “Orlyat”, capable of rising to a two-kilometer height, but before the collapse of the USSR only five managed to stand on the wing.

In 1987, tests began on the Lun strike missile-launch vehicle with six 3M-80 Mosquito anti-ship missiles on board. However, this project also stopped with the collapse of the Soviet Union. And even the first model of civilian wig "Volga-2" did not have time to become a serial and died along with the USSR.

Rumor has it that our overseas "partners" showed a special zeal in destroying the production of many advanced Soviet developments, including ekranoplans, directly or through their agents of influence. In any case, the “iron curtain” hardly collapsed, the probable friends made sure that they showed “Orlyonok” with certain technical documentation, after which similar devices suddenly appeared in the US ...

In our country, only the 2000 were returned to the revival of the construction of the WIG.

Two dozens of small five-seaters Amfistar and its upgraded version Aquaglide, under the supervision of the Russian Maritime Register of Shipping, were released by Amphibious Transport Technologies (ATT CJSC) and Arctic Trade and Transport Company (ATTC). In development - machines with a loading capacity of 20 tons.

Its own model, the C-90 screen with a payload of up to 4,5 tons and a flight range of over three thousand kilometers in the altitude range from 0,5 to four thousand meters, was demonstrated by the Sukhoi Design Bureau.

Nizhny Novgorod and Petrozavodsk are developing the production of Orion-20 ekranoplan with a displacement of up to 10 tons and a passenger capacity of 21 people. Its version of the 24-local “Burevestnik-24” screened vehicle with a payload of tons of 3,5 was created by the Sky Plus Sea design bureau.

The Alekseev Central Design Bureau, together with NPP Radar Mms, is preparing for the construction of the next generation of ekranoplans with a payload from 50 to 600 tons. The working portfolio includes transport and cargo-passenger vehicles capable of moving loads of up to two to three thousand tons. 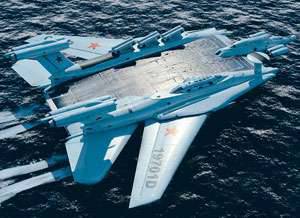 Are there too many developers and in general how much demand for ekranoplanes in today's conditions, the adviser to the general director of the Krylov State Scientific Center (head shipbuilding research institute), doctor of technical sciences, professor, honored scientist of Russia Valery Polovinkin told the Military Industrial Courier? ekranoplanostroeniya need to be considered from several positions. The first one is rather trivial, but technologically important: this device undergoes exceptional loads in its movement, especially when it gets on the wing (during takeoff, during landing). Therefore, even an ekranoplan from the point of view of creating advanced technologies that will be equally used in aircraft construction and shipbuilding, is primarily a research, laboratory base, verification of constructive, materials science and technology solutions. As well as from the standpoint of improving management systems: the device must be obedient at ultra-low altitudes, to behave accurately and relaxed for pilots. And here we have the most complex object and research base. The same goes for construction materials. Extreme loads help to find solutions that in the future can be implemented in aircraft manufacturing and shipbuilding. All this is obvious.

From the point of view of the future use of WIG, when they were created by the great designer Rostislav Alekseev and his bureau, were considered in several ways. The first is a lifeguard, a vehicle that is quickly, quickly delivered to the disaster area to help people and their evacuation. Ekranoplans can do without airfields, start from the water surface, from the ground, from the ice. The second option: ekranoplan - a means of transporting the assault force, special forces. The third option, which was supported by both the commander-in-chief of the Navy, Sergei Gorshkov, and the Minister of Defense, Dmitry Ustinov, which Alekseev realized: the ability of these vehicles to carry rocket weapon.

The main advantage of WIG - their stealth. It is very difficult to detect this object against the background of the sea, especially when it is disturbing. He can quietly approach the goal and strike or land some means. Even from the satellite it is difficult to detect it, because it has a blurred outline - a low-contrast spot. And it is very correct that at last they paid attention to the construction of the wig. ”

Waiting for a single customer

“Now the main trouble,” Valery Polovinkin continues “debriefing”, is not so much in the absence of any engineering ideas, but in absolutely unreasonable duplication of developments. I can call you in the Far East a very serious group of specialists who create their own architecture, their own approaches to ekranoplanes. There is an association of ekranoplanostroeniya in Moscow under the leadership of Oleg Volik, they have their own developments, two experimental devices, they have ideas to build a composite production in Petrozavodsk. The next group is the Morinsforms-Agat concern with the Alekseevsky bureau. They have their own ambitions and plans for the creation of ekranoplans. So it turns out, as in the fable "Swan, Cancer and Pike." 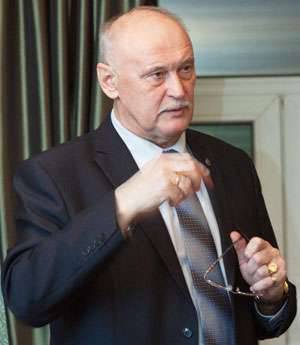 But the tasks in ekranoplanostroeniya alone, and critical technologies are common, without the solution of which the idea will not be realized. First, you need to join forces to create a power plant. This is the “snagging” of either a helicopter gas turbine engine, or a tank engine, which at one time was on the T-80. We need a modern reliable unit that will work in a fairly aggressive environment, sea air, salt and other things. Secondly, efforts need to be combined to create relevant materials. This is not about metals, because under the operating conditions of a ground-effect vehicle (WIG) they will corrode and deform so quickly that the resource will be extremely limited. Consequently, it is necessary not to spray funds, but to create uniform structures, at least for the nomenclature of composites. We at the Krylov Institute conduct tests of the wing, each of the designers gives his own material, this is not normal. It is necessary at least jointly to understand that this will be: a set of carbon fiber constructions (especially now with the development of nanotechnology), next-generation composite materials, which are not inferior, but much stronger than metal ones, and most importantly - they have no residual deformation. Need to work together. And a single customer for ekranoplans may well be both in defense and in civilian use. After all, there was already a promise at the level of the country's leadership to create something like an airplane wig on the Kaliningrad-Petersburg line. In order not to cross the border, it would be worthwhile to organize such a transport system. And its analogue is calculated for Yakutia, Siberia, and other remote regions. The Far East is attractive for introduction of ekranoplanes.

By and large, each technical or combat means has its own niches, where its application is most optimal. And for ekranoplans such specialization is offered, even a few, we have already spoken about them. This is, without a doubt, a lifesaver. Better than an ekranoplan, no one can cope with the task of evacuating people in an accident at oil and gas fields. It is also more convenient to throw special-purpose groups to the enemy’s rear with such a device. Make the best use of WIG for monitoring and protecting the state border and other strategic facilities.

The family of ekranoplans may consist of large, medium and small devices that must be created for the performance of specific tasks. If you carry out scientific reasoning, any technique will seem too expensive, unprofitable, and if everything is calculated, substantiated and compared with the level of problems solved, it turns out to be quite acceptable, and even economical enough.

The fleet is not built by individual models - only by divisions, squadrons, larger units. So with ekranoplans. Their place in the ranks will be determined, and it will be filled.

In the meantime, this is an excellent research base for developing new technologies designed for the decade ahead. And in order for them to develop more efficiently, it is important not to spread the available funds on several designers, but to unite the efforts, the scientific production and creative potential of all those who are ailing for the future of Russian ekranoplans. ”

Ctrl Enter
Noticed oshЫbku Highlight text and press. Ctrl + Enter
We are
Ekranoplanam - to be!Conquerors of water and air: "miracle" -screens of Rostislav Alekseev
57 comments
Information
Dear reader, to leave comments on the publication, you must to register.