February 14 2016
120
American corporations begin the first work on the creation of the next fighter, the sixth generation. It is assumed that he must replace all other existing American fighter jets (except F-35) and will be able to guaranteedly destroy super-maneuverable Russian combat aircraft. Bet on laser weapon. 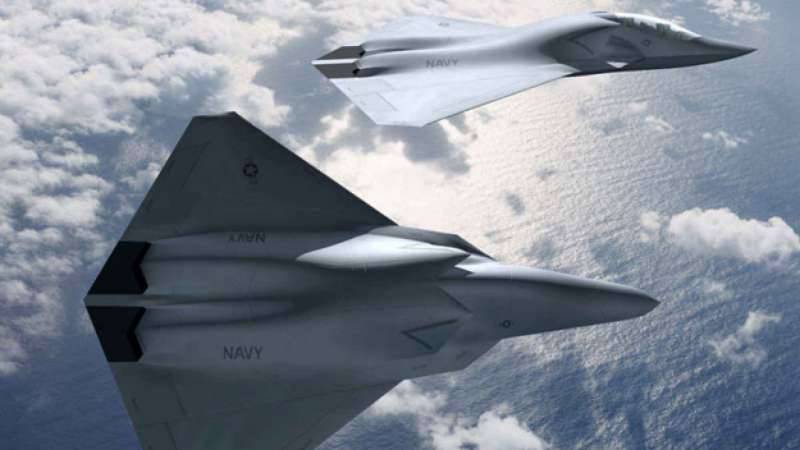 The world media has repeatedly reported on numerous problems of the new American multi-purpose fighter F-35. The main ones are the lack of maneuverability in two of the three aircraft variants, as well as insufficiently effective armament, which in theory was supposed to ensure the F-35 victory over a potential enemy before the start of a maneuvering battle with him. The inability of the F-35 to resist in the “dog dump” the newest Russian Su and MiG, as well as the Chinese fighters copied from them, caused the Pentagon to consider resuming the production of modernized versions of the F-15 and F-16 fighters. It is cheaper than re-launching the conveyor, from which the much more modern and expensive F-22 aircraft, designed mainly for air combat, descended. Their release was discontinued in the 2011 year.

And in early February, it became known that the Northrop Grumman company, which entered into history By creating the first stealth bomber in the B-2 technology, she intends to introduce the concept of a sixth generation fighter. The show was timed to coincide with one of the most important events in the sports life of the United States - the American Football Super Bowl. A commercial appeared on the Internet, on which something resembling Star Wars equipment is being built in the workshops of the plant, and an airplane is sweeping across the sky, its form almost the same as the tip of a spear.
Northrop Grumman is not the only company creating the sixth-generation fighter, to which the Pentagon has been given the FX symbol. According to the American Internet resource Nextbigfuture.com, Boeing and Lockheed Martin are also working on the project. First in 2011, he announced that at his own expense he was designing a sixth-generation fighter for the Navy and Air Force. It is only known that he should be able to fly in a supersonic mode for a long time. Lockheed Martin, promulgating its version in 2012, works for a longer perspective. Her brainchild will be born no earlier than 2030 of the year. The company focuses on increased speed and range, enhanced stealth and durability.

Speed ​​and range will be increased with the help of new type of propulsion units, united by the common name “Adaptive Versatile Engine Technology - AVET). They will be installed on new fighters that will go into service with the naval forces in the 2028 year, and the air force in the 2032. As for the quality of "stealth", then Northrop Grumman designs his plane "tailless", which will make it even less noticeable to radar.

Kill in the blink of an eye

One of the main components of the protection of Su-type fighters from the striking fire of an enemy aircraft is their super-maneuverability. It is she who allows them to carry out effective anti-missile maneuvers - the enemy either cannot aim, or the missile fired by him loses the target. The missile launch warning system allows the pilot to track the missile flying behind him and take timely maneuvers to confuse him. But the advantage of super-maneuverability will go to zero if the plane is destroyed at the same second, when it will be in the crosshairs of the sight. There is only one weapon that can do this in the blink of an eye. Speech, as you might guess, is a laser.

Attempts to arm the aircraft with lasers have already been made. The United States created on the basis of "Boeing-747" a kind of loitering hunter YAL-1, armed with a laser gun. It was installed in the turntable in the nose of the aircraft. The task of YAL-1 was to shoot down Iranian or North Korean ballistic missiles immediately after launch. However, it turned out that the laser power will allow him to do this only if the aircraft will fly within the borders of these countries. In addition, for chemical pumping the laser required tons of special fuel. As a result, the project was abandoned. Only one plane was built, scrapped a couple of years ago.

Of course, about any installation of this type of fighter lasers could not speak. But advances in the field of laser technology allowed to return to this idea. Lockheed Martin in collaboration with the University of Notre Dame, the Agency for Advanced Defense Research Projects (DARPA), and the Air Force Research Laboratory have already begun flight tests of a new type of solid-propellant laser installed on a Dassault Falcon 10 business jet. This laser was named “Aero-adaptive, aero-optical, with controlled beam” (Aero-Adaptive, Aero-Optic Beam Control), or ABC.

These properties, according to the Lockheed Martin press release, help him focus on the target, regardless of its maneuvers or air turbulence. The laser itself will be located in a rotating turret mounted on the fighter, which allows shelling in the range of 360 degrees. In other words, it is not necessary for the pilot to perform “supermaneuvers” in order to get into the enemy plane. It will be enough for him to get close to him at a distance of the laser light. Accuracy of aiming will be provided with the help of a computer, it remains only to press the button. The same turret will provide all-round defense of the fighter from enemy fire. And in order to expand the combat capabilities of the sixth generation fighter, rocket weapons will be on board.

There is one problem with laser weapons - its use seriously reduces stealth, because when firing a laser gun, a large amount of heat is emitted, which is easily caught by infrared detectors. So, the fighters will have to install special heat sinks. But then the battle will be limited by the capabilities of this absorber. According to the American Internet resource Foxtrotalpha.com, Northrop Grumman is currently developing a technology that will avoid the release of heat into the surrounding air environment and dispense absorbers.

Do not repeat F-35 errors

By relying on the “universal” F-35, the United States would unwittingly find itself in the same position as in the times of the Hundred Years War (1337 – 1453) one of its participants would have been if they had fully relied on the firearm that had just appeared, having forgotten their armor , crossbows, sabers, swords and cavalry. It is hard to imagine how troops, having nothing but arquebuses, would be able to withstand the ranks of crossbowmen and an avalanche chained in armor, bristling with all kinds of edged weapons of horsemen. However, this does not mean that primitive arquebuses were a dead-end path for the development of weapons. Gradually evolving, they led to the emergence of such types of weapons, which forever sent knight armor and swords to museums.
Since the F-35 has some properties due to which the Pentagon retains interest in its use (vertical take-off and landing, the ability of large-scale "work" on ground targets, the possibility of improving destructive properties as a result of upgrading and even the ability to install an ABC type laser) It is not about FX replacing F-35. Before the fighter of the sixth generation, no one sets the task of being a universal means of warfare simultaneously for the Air Force, Navy and Ground Forces. Each type of armed forces will receive its own, individual type of multi-purpose fighter, which is created mainly to combat airborne targets.

With all this, it is obvious that the United States does not intend to return to the "classic" air battle, in which maneuverability was a key factor in victory. They continue to develop a direction in fighter technology that will ensure the destruction of enemy aircraft from a distance. And against such fighters, even the most ultra-manned aircraft will have no more chances to survive than a tiger against a hunter armed with a laser-optics gun.

Ctrl Enter
Noticed oshЫbku Highlight text and press. Ctrl + Enter
We are
MiG-23 fighters in AfghanistanMiG-21 in Afghanistan
120 comments
Information
Dear reader, to leave comments on the publication, you must to register.