“I would like to ask the distinguished author: Is it correct to analyze the armor of German knights on the basis of English effigy?”
(tacet (Vladimir)).

The interest generated by the publication of materials on the battles and armor of 1240-1242, is understandable. This is our история, glorious history, and the “noodles on the ears” are absolutely useless to us. I personally, however, most liked the question of the correctness of the comparison of the weapons of the German knights and the English. Well - who asked the question right there in the comments and answered, and answered very well. But, as in the case of the article about the "chained Jarl Birger", it should be noted that words are just words! Even if based on something. So in this case it will be better to see than ten to read.

That is, again, there will be given the maximum possible (though far from exhaustive) selection of German effects, which make it possible to trace the genesis of German protective armor from the “hauberk age” and up to the appearance of “white” one-piece armor.

The earliest German effigy that has come down to us is St. Mauritius, issued in the Middle Ages as an “Egyptian”, in connection with which he was given specific African features. Magdeburg Cathedral, Germany, 1250. Dressed, as you can see, in a hauberk of mail, over which is worn “leather of play” or a primitive armor of metal plates riveted to strips of fabric. D. Nicole believes that the cause of the appearance of such armor among the Germans was the influence of ... Slavs, Hungarians and especially Mongols who shot German knights with bows in the battle of Legnica in 1241 year!

To begin, however, follows from that with which it is always necessary to begin - from historiography. The underlying research on the history of the Crusader wars in this case is the highly authoritative edition of D. Nicolas Arms and Armor of the Crusading Era 1050-1350 (Greenhill Books ISBN: 1-85367-347-1) - "Weapon and the armor of the crusader era 1050-135-. The first volume has 636 p. The second - 576 p. It examines the weapons and armor of the era of the Crusader wars throughout Eurasia, all sources used are shown in graphical drawings! That is, this is a very serious edition both in terms of volume and content. And this book is on the Internet, and it can be easily downloaded!

Ederhard I von der Mark, mind 1308 Frondenberg, Germany. Such a touching mod-knight with coats of arms on his chest. Very few such images are known at Surcoe, and another such figure is located in the castle of Carcassonne in France. Is this not the best evidence of knightly "internationalism." Pay attention to the wicker mittens with slits on the palms to release hands out.

The article by D. Nicolas “The Riders of the Ice War: The Teutonic Knights against the Lithuanian Riders” - Nicolle, D. Raiders of the Ice War is extremely interesting. Medieval Warfar: Teutonic Knights ambush Lithuanian Raiders // Military illustrated. Vol. 94. March. 1996. Unfortunately, she was published in the Military Illustrated magazine in England in 1996. But in the wilds of the Internet in the journal “Warrior” No. 5 for 2001 a year was given the author’s translation of this material called “The Battle of the Ice 1270” (Shpakovsky V.O., Galiguzova E.)

Rudolf I von Hohenberg, mind. 1336 Rottenburg, Germany. Pay attention to his helmet and impressive horns - all in the best traditions of Germanic chivalry, but ... relating to a later time.

All the above books are written in English. But there are very interesting studies in Russian. This is - Yu.L. Immortal Chivalry and know 10-13 centuries. in the views of contemporaries // Ideologies of the feudal society in Western Europe: problems of culture and socio-cultural representations of the Middle Ages in foreign historiography. M .: INION of the USSR Academy of Sciences. C.196 - 221; Okshott, E. Archeology weapons. From the Bronze Age to the Renaissance // Translated from English. M.K. Yakushina. M .: Tsentrpoligraf, 2004; Folks, C. Medieval armor. Gunsmiths // Translated from English. THOSE. Lyubovskaya. M., ZAO Centrpoligraf, 2005.

Albrecht von Hohenlohe, mind. 1338 Schontal, Germany. Here we are shown a really arsenal: a dagger on a chain, a helmet bascinet on the head of the deceased and a helmet tokhelm beside, armored gloves. Pay attention to the wide sleeves of chain mail. That was the difference with the British. Those preferred narrow sleeves. The Italians, the Germans (not all!) And the Scandinavians had wide

Well, now more specifically. Let's start with the fact that by 1066, the chain mail had dominated the battlefields for almost two hundred years. How can we prove it? The code of the same Charlemagne. In particular, the "Capitulare Missorum" (Capitulare Missorum - one of the basic rules of the Carolingians), 792 - 793, prescribed that the entire "nobility" of the Carolingian Empire had a full set of armor, and also had a horse and the corresponding offensive weapons.

Archbishop of Cologne, mind. 1340 City Museum of Mainz, Germany. Although the bishop, and the equipment he looks older than the previous knight.

In 802 - 803 followed by another capitularity, according to which each rider had to arm himself with his own helmet, shield, and chain mail armor, called “Brunia”. In 805, an amended law appeared, which Karl commanded all in the empire, who owned the twelve Mansi (land), to serve in cavalry in their own armor, and in case of failure to appear in the service, both the earth and the armor could be confiscated. Marines did not have such good defensive weapons, however, the Aachen capitulary of 802 - 803. demanded that each of them had a shield.

Rudolf von Sachsenhausen, mind. 1370 Frankfurt am Main. Very beautiful and "modern knight", is not it? On the chest are gold chains (one for a helmet, on which is a cross-shaped slot for a “button” on a chain), a gilded helmet with heraldic helmet marking, an armorial shield, gilded knee pads, and “boiled leather” leggings. The embroidered dzhupon, a dagger on a rich belt on hips - all at it.

However, Claude Blair has repeatedly stated that the “era of chain mail” in Europe is the period from 1066 to 1250. Why? There is a “Bayesian canvas”, there is a “Carpet from Baldishol” ... Someone has his own figures (for example, Evart Okshott gives a slightly different periodization, starting with 1100 and 1325), but this timeframe is most justified, as confirmed by many by sources. Interestingly, until the end of the 13th century, chain mail in Europe was worn without wadded clothing under it, and the only quilted element of a knight’s clothing was a cap on his head! In the famous manuscript of this period, the Bible of Macieus, there are many images of chain mail that both put on and take off, and in all cases the only clothes under it are a colored shirt with sleeves to the wrist. It remains only to assume that some sort of lining could be on the very mail, only to prove this assumption today is almost impossible. But, of course, in winter, people simply could not help but “warm themselves” and put on something warm and quilted under the chain mail and, most likely, on it, which increased its protective properties. 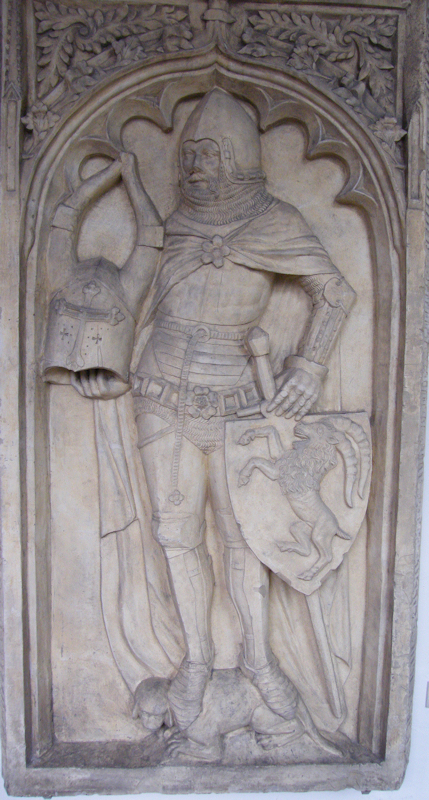 Burckhard von Steinberg, mind. 1376 Nuremberg Museum, Germany. Pay attention to his legs - they have almost full plate armor, but on the torso under the fabric there are clearly visible "imprints" of square plates, which, apparently, were not riveted (no rivets could be seen), but enclosed in "pockets" of fabric.

Knights and conical helmets were also worn by those knights who took Jerusalem by storm in 1099. But even at the beginning of the XIII century. since 1066, the armor has changed very little, as evidenced by the image from another “carpet” - “Norwegian”, beginning of the XIII century. from the church in Baldischol, where the warriors look exactly the same as the horsemen on the tapestry from Bayeux.

Eberhard von Rosenberg, mind. 1387 Boksberg Evangelical Church. Germany. It is known that approximately at this time it became fashionable to close the armor with clothes made of expensive fabric, and now we see that the deceased had time to give away the tribute to fashion. But pay attention: he didn’t have enough money for a full plate cover for his legs, or he thought that he didn’t need it, because he had chain mail on his hips! And the barmitsa is also mail. By the way, pay attention that ALL knights, whose effigiy here are given (and there are still a lot of them besides these images!) Are put on just chain mail. No one has "leather armor covered with wrought scales." Not one!

What is noted by the researchers of the “Baltic Crusaders” theme? The fact that with their weapons they are always ... a bit late! That is, they did not go in the vanguard of "scientific and technological progress" in the development of armor, but rather constituted its rear guard. Again, this is indicated by the same effigy, on which the Norwegian and Swedish knights are shown not in the most modern armor. But the effigy of the German knights - by the way, despite all the military destruction of the Second World War, they are surprisingly quite a lot - show us almost the same thing as the effigy of the British, French, Spaniards and Italians. Well, this once again confirms that the European knighthood was international in its basis, not to mention the spiritual and knightly orders. Well, those that you are looking at now only confirm that the forged armors of the order knights did not appear at all in 1240 and not in 1242, but many years later, just like the British, and ... English effigy! So what about the incorrectness of comparisons it simply does not go.

Georg von Bach, mind. 1415 Steinbach, St. Jacob's Church, Germany. Everything is about the same as the breaststroke of the English knights of the same year. Only this effigiya is made of stone ...

Ctrl Enter
Noticed oshЫbku Highlight text and press. Ctrl + Enter
We are
Effigy and breaststrops tell ... (Tombstone in the study of weapons of Western knights of the era of 1170-1659.)The development of armor in the Middle Ages in Western Europe
Add a comment
Information
Dear reader, to leave comments on the publication, you must to register.