The headaches of the new government of Latvia: refugees and Russian language

February 10 2016
26
On the eve (Tuesday, 9 of February), Latvian Prime Minister Laimdota Straujuma held the last meeting of the Latvian Cabinet of Ministers with the rank of head. Ms. Straujuma wrote a statement “on her own” back in December 2015, and now the resignation has taken place. And this resignation took place, in fact, not at all because the Cross of Recognition awarded (there is such an award in the Baltics) Strauyama really lit up with the desire to turn into an ordinary Latvian pensioner (lady of 1951), but because “Strauyama’s own desire” was dictated by intraparty pressure. And who in such countries as Latvia dictates the rules for withdrawing and appointing ministers and heads of government, is a separate occasion to talk ...


And to talk, it should be noted, is about what. The old government did not have time to be disbanded in Latvia and the new government began to form, the main candidate for which (according to all the democratic canons) by President Vejonis was announced a man named Maris Kuchinskis, as this most unformed new government has already outlined a number of main directions in its policy. The first direction: the solution of the tasks set by the EU for the quota admission of African and Middle Eastern refugees.

It should be noted here that the question of the entry of refugees into Latvia has become one of those pressure tools that Laimaduta Straujuma tried to resist. Seemingly a sort of gray mouse of the Baltic policy (of course, not like in all respects advanced Ms. Grybauskaite from neighboring Lithuania), Strauyama could actually afford (unlike the advanced Grybauskaite), well, almost openly, to declare her unwillingness to execute Brussels Wishlist Thus, Straujuma, during her premiership, repeatedly, referring to the leaders of the European Union, stated that it was foolish to distribute the ridiculous quotas across Europe, at a time when more than one and a half million refugees arrived in the EU. According to the prime minister (already former) of Latvia, the European Union had to think more about strengthening its external borders, caring primarily about the interests of its citizens.

For obvious reasons, after such words, Straujuma was noticed in the EU (first of all in the chambers of Angela Merkel) - they drew some time after not quite successful attempts to learn without mistakes to pronounce the name of the head of the Latvian Cabinet ... And if they paid attention to the EU, then he immediately had to pay this very attention to his colleagues in the Strauyuma party, after which she was suddenly and suddenly wanted to have a well-deserved rest ...
So here. The new government headed (supposedly) with Maris Kuczinskis (Union of Greens and Peasants) announced that Latvia will fulfill all obligations to the European Union for the reception of refugees in full. Merkel was relieved from the heart, but the idea of ​​rebellious slaves from among the Baltic officials was already spinning in the meanders of the Federal Chancellor of All Europe.

But Mr. Kuchinskis, as soon as he was relieved by Merkel, ran into what Strauyume had previously encountered. Latvia is a small country, everyone knows each other ... And the people rarely (very rarely) still want to express their opinions. Statements, if the most literary options are given, boiled down to something like the following: “Mr. Kuchinskis, that is, how to fulfill all the obligations to receive refugees ?!” And then, of course, an untranslatable wordplay using (as in the classic film) local dialects and idiomatic expressions ...

Such a reaction of the Latvians made the unformed Cabinet scratch their heads, and the same Kuchinskis, hoping that Frau Merkel was distracted by problems with Seehofer and the railway incident in Bavaria, said:
Earlier, we will fulfill the commitments given to the European Union under the quota of refugees, but we declare that Latvia cannot accept the additional number of immigrants yet. 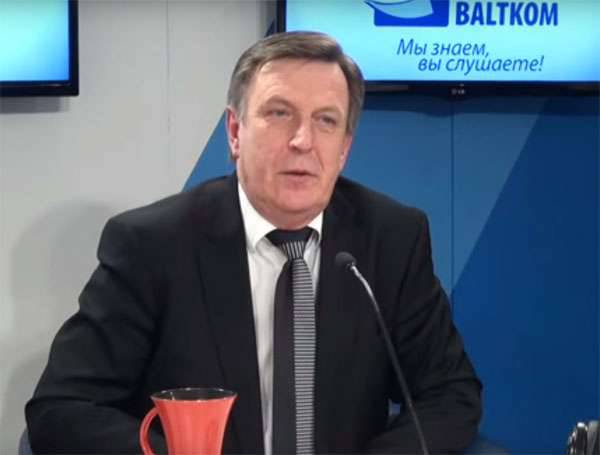 According to Kuchinskis, this is a “soft formulation.” The newly minted prime minister of Latvia quotes portal delfi:
I am against categorical words and harsh expressions that we will not do something that no one even offers to us.

From his comments on this “soft wording” it becomes clear that in the camp of the Latvian politicians for a long time they were looking for an option, as if to hint to the European Union that Latvia does not want thousands of refugees from Iraq, Libya and Syria to join it. According to Kuchinskis, he did it ...

Well, so that the European “partners” would not have a feeling of rebellion in the Latvian paper boat, Kuchinskis announced other steps that “his” government is going to take in a short time. One of these steps is the new educational standard, in which the concept of “Russian-language school” is absent, despite the fact that more than 27% of Russians live in Latvia and about 44% of Russian-speaking. The standard states that since September 2018, studies in all schools in Latvia will be conducted exclusively in Latvian as the only state language. Today in dozens of Latvian schools bilingual education (children are taught both in Latvian and Russian).

Having learned about the new educational standard in Latvia, the “Russian friends” in Europe breathed out again and, probably in their notebooks, circled Kuchinskis's name in a green oval - they say, our people should be supported ...

It should be noted that in January, 2016, the same Kuchinskis declared that he was not ready to carry out educational reform by the year of 2018, and offered to push it aside “for later”. But, apparently, it is not for that Kuchinskis who are trying to push the head of the Latvian government into the post to take into account the opinion of hundreds of thousands of Russian-speaking citizens of the country.

By and large, there is no government in Latvia yet, and there are no heads of cabinet ministers in the country either. There is only one (and this is the apogee of democracy) candidate nominated by the President of Latvia, whom the Latvian people did not elect either ... And now this candidate is trying to declare the work of "his own cabinet", wagging his tail in such a way as to completely excite the people as well and, most importantly for him, like Eurocrats. Against this background, democratic Latvia, which breathes air free from “Soviet occupation”, for the first time in its stories faced with a complete lack of funds in the budget for free medical care.

From Twitter Mayor of Riga Nil Ushakov:
1986 year, turn to the store for alcohol. 2016 year, the queue to the hospital for free examinations.

The most interesting thing is that Kaczynskis, the sub-prime minister, has already stated that “he will require additional funds for Latvian healthcare” The main question: who will require? For those who continue to push to bring Latvian military spending under the NATO standard 2%? There it’s for sure that the Latvian medicine doesn’t give a damn ... Well, this isn’t "Soviet invaders" ...

Ctrl Enter
Noticed oshЫbku Highlight text and press. Ctrl + Enter
We are
Latvian passions: from the new premier to the dispatch of soldiers to the Central African RepublicRepublic of the former USSR. Latvia: years without “occupiers”
26 comments
Information
Dear reader, to leave comments on the publication, you must to register.