Preparing for a fight with Russia

February 10 2016
88
A military correspondent for The Telegraph reported that 1600 British troops will be deployed to the Middle East. In addition, the British will transfer to Jordan more than 300 units of military equipment. According to sources, the purpose of these exercises is not at all preparation for the fight against terrorists "IS", but to work out the transfer of contingent and means of reinforcement to Eastern Europe in the event of a NATO conflict with Russia. 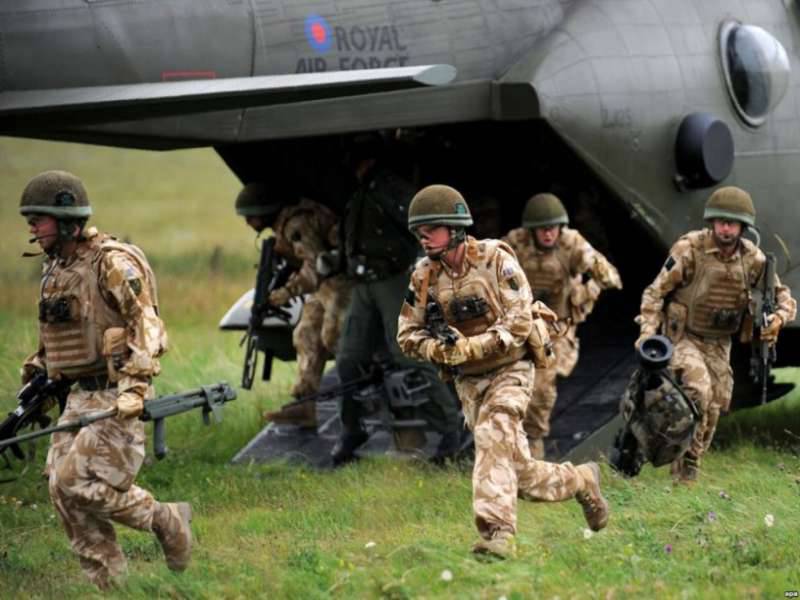 As the war correspondent writes "The Telegraph" Ben Farmer, more 1600 British soldiers will be transferred to the Middle East to "practice" in a large-scale operation, comparable to the invasion of Iraq. This happens for the first time in more than ten years, the correspondent notes.

Jordanian military-logistical exercises are aimed at testing the deployment of the 30000th army, reinforced tank connections, in the “crisis zone” in a certain part of the world. The exercises will be held despite a sharp reduction in “defense” spending over the past five years, the reporter points out.

Maneuvers called "Shamal Storm" are used for testing the transfer of British troops and armored vehicles in one day to Eastern Europe. It may be necessary if there is a confrontation between Russia and NATO, unnamed sources told the reporter. “This teaching is not against ISIS,” the anonym asserts. “In any case, we are talking about the fact that we are more likely to join the United States in Ukraine than in Syria.” "These are not the types of military force that could go to Aleppo and strike at a crowd of jihadists," the military added arrogantly.

Earlier last year, one of the American military leaders said that Washington was concerned about the reduction of defense spending by Britain. It was also said that such a reduction means that an ally of the United States will not be able to transfer the necessary troops and thus join the allied operation, much like it was during the Iraq campaign of 2003.

More than 300 units of British military equipment have already been sent to Jordan.

After more than ten years of fighting the militants in Afghanistan, the British army is trying to re-work out the skills of participating in a large-scale conflict with the use of armored vehicles. Exercises in the southwestern desert of Jordan will be the largest of its kind since 2001, when British troops trained in Oman.

The exercises will involve the 3 UK Division and the Air Force. Among the tasks are working out landing in the enemy's rear, organizing a field hospital, contacts with chemical and even biological weapons.

As Ben Farmer notes, the United Kingdom has long-lasting military ties with Jordan, and a special command of the British army is assigned to the headquarters of the royal army and serves as instructors.

An unnamed army representative told the correspondent that annual (note: annual. - O. Ch.) Exercises in Jordan “immerse” the British army in a “difficult environment” in which the military must ensure full combat readiness. The task of the exercises is to deploy an 30000 army in any part of the world with the support of armored vehicles. The maneuvers will check the key skills of the soldiers - from the actions of the air force to the rapid organization of the field hospital, prospecting and disposal of explosives. New maneuvers will allow the British army to thoroughly prepare for the "containment of threats to Britain and its interests."

So let us add, the British military, albeit anonymously, argue that the Shamal Storm maneuvers are used to test the transfer of British troops and armored vehicles to Eastern Europe, which may be necessary in the event of a confrontation between Russia and NATO. Also, unnamed military officials talk about the likely accession of British forces to the US forces in Ukraine.

And despite this, the exercises are held in Jordan.

There is, however, another circumstance that speaks in favor of the anti-Russian activization of the Western allies.

On the website of the North Atlantic Alliance, a report was recently published by Jens Stoltenberg. In it, the NATO secretary general claims that in 2013, the Russians conducted exercises simulating a nuclear strike on Sweden.

“As part of a large-scale rearmament, military maneuvers and exercises in Russia have reached a level unprecedented since the days of the Cold War. Over the past three years, Russia has conducted at least 18 large-scale exercises, some of which involved more than 100 thousands of servicemen. These exercises included the simulation of nuclear attacks on NATO allies and on its partners (for example, an imitation of an attack on Sweden in March 2013), the document quotes "Lenta.ru".

The fact that the NATO Secretary General announced this “fact” in 2016 was alarming. It can be assumed that in March 2013, relations with Russia were not yet spoiled, and the teachings were not considered potentially dangerous for the future of defenseless Sweden. 2016-th year - is another matter: sanctions are in full swing, and Moscow is as uncompromising as in 2014, at the height of the Ukrainian crisis.

Russian military experts, however, doubt that the clash between NATO and Russia will occur in Ukraine.

The clash of NATO with Russia is likely, but not direct, and not in Ukraine: after all, the latter has already left the forefront of world politics. NATO is now preparing an operation in Syria — that is where its main focus is. “They will formally fight with ISIS in order to take control of the militants, take control of their territory and prevent the advance of the troops of Bashar Assad. To solve this problem, they will need to divert Russia from the Syrian direction, and in this case, they will try to unleash a war in Ukraine, ”this viewpoint was voiced Reedus Corresponding Member of the Russian Academy of Military and Artillery Sciences Konstantin Sivkov.

There is one more opinion concerning both Ukraine and Syria.

Director of the Institute for Applied Political Studies Grigory Dobromelov noted that there were reports in the press about the readiness of Saudi Arabia to provide Ukraine with assistance in the amount of 10 billion dollars - allegedly to support agriculture.

“In fact, this means that Saudi Arabia is ready to give Ukraine some kind of bribe to aggravate the situation in Donetsk, distracting Russia from the situation in Syria,” this expert believes.

It is possible that such messages in the media are a kind of verbal intervention, suggests Dobromelov. “Various types of information provocations against the background of the aggravation of the situation in the Middle East are quite understandable,” he says. - Considering the tangle of contradictions, in which Turkey and the EU, Russia and the USA are now first of all drawn, it is absolutely obvious that in order to get at least some temporary suspension of the situation around Aleppo, any resources will be used, in including similar stuffing.

However, experts are experts, anonymous, anonymous, but you need to know and official information about the frightening exercises in the Middle East. British From the government.

In the federal issue "Rossiyskaya Gazeta" provides a denial of the British Department of Defense newspaper article.

A spokesman for the ministry denied the “leak” in the media in the following words: “What they (journalists) assume is not the goal of the exercise. They are not about war with Russia. ”

According to him, the exercises in Jordan are held annually.

And yet, writes "RG", observers say that hardly official London could make a different statement. In the meantime, British politicians in their speeches use the “hostile” image of Russia and simulate scenarios of the conflict between NATO and the Russian Federation on the territory of the Baltic states.

Thus, let us add in conclusion that the “leak” in The Telegraph plays into the hands of the British government and the British military, since it fully complies with the scarecrow scenarios about Russia and fits perfectly into the concept of strengthening the “defense” alliance with the United States. There are as many as three official "justifications" of the teachings: first, they are annual; secondly, in the Middle East, there are militants "IG"; thirdly, the British army lost its skills, relaxed, and it was time for the soldiers to train properly.

Observed and commented on Oleg Chuvakin
- especially for topwar.ru
Ctrl Enter
Noticed oshЫbku Highlight text and press. Ctrl + Enter
We are
Active phase of Sea Breeze 2013 exercises completedIron call
88 comments
Information
Dear reader, to leave comments on the publication, you must to register.