To give in is to win! 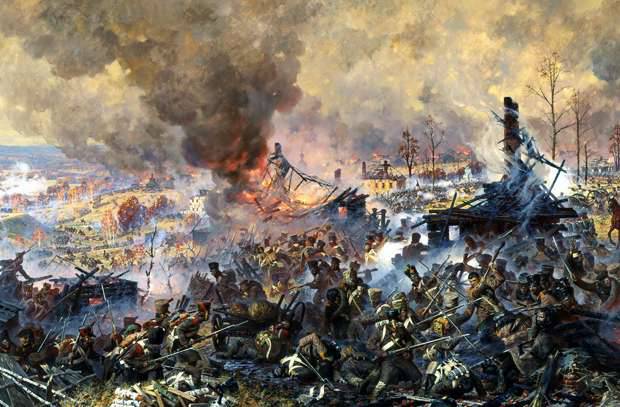 8 February 1807, the Russian army in the battle of Preusch-Eylau forever dispelled the world about the omnipotence of the Great Army of Napoleon

“The Battle of Preussisch-Eylau is almost emanated from the memory of contemporaries by the storm of the Battle of Borodino ... The subject of the dispute weapons under Borodino there was a higher, more majestic, more Russian heart clutching than a weapon dispute under Eylau, under Borodino it was a matter of whether Russia should be or not ... The subject of arms dispute under Eylau was presented from a different point of view. True, he was the bloody preface of Napoleon's invasion of Russia, but who then saw it? ”- this is how the legendary Denis Davydov began one of the bloodiest battles of the Russian-French war 1806-07. And he is right in many ways.

The events of World War 1812 of the year really obscured many of the feats of the Russian soldiers, committed six years earlier. And after all, the battle of Preussisch-Eylau, according to many contemporaries, was the first battle in which the myth of the invincibility of Napoleonic Great Army was dispelled. And even if no party formally won the victory, and the death toll surpassed all conceivable limits, in a strategic sense, the Russians left the upper hand. “What a courage! What courage! ”- so in the midst of the battle, according to the recollections, the emperor of France exclaimed, watching the attack of the Russian grenadiers. But these words also apply to the whole battle of Preussisch-Eylau: February 8 day (in a new style) 1807 of the year entered forever in history as the day of the triumph of the Russian spirit and Russian weapons.

Innocent, in general, the actions of the French became a prologue to the battle. Marshal of France Michel Ney, the commander of the 6 Army Corps of the Great Army, was unhappy with the winter apartments allocated to his troops under Prussian Neudenburg. To fix the case, he moved part of his forces to the east, hoping to make them more comfortable. But at the headquarters of the General from the cavalry, Leonty Bennigsen - the commander-in-chief of the Russian army stationed in Prussia - took these actions as the start of an offensive on Koenigsberg. The Russians moved the troops towards, forcing the French to withdraw, but did not pursue them: there was no direct order from the capital. This delay and took advantage of Napoleon. Frustrated by Ney's self-righteousness, he suddenly saw in unexpected maneuvers of troops a chance to repeat his Yen success: to encircle and defeat the Russian forces opposing him in one battle.

The condition for achieving this goal was only one thing: the observance of complete secrecy. But he didn’t succeed in doing this - the practice of distant Cossack patrols, which is indispensable for the Russian army, prevented it. One of them intercepted the courier, who carried with him the most secret order of Napoleon about moving the troops and preparing for the general strike. Having received this information, General Bennigsen immediately took the necessary measures to remove the Russian army from danger.

For nearly a week, the rearguard of the Russian army, commanded by Prince Bagration and General Barclay de Tolly, fought off the attacks of the French, giving the main forces the opportunity to take the most successful position. The most fierce fight was the February 7 battle (January 26) near Ziehlhof - a place two kilometers from Preussis-Eylau, actually the outskirts of the city. Several times he passed from hand to hand, and neither side was able to assert with complete confidence that she had gained the upper hand.

The outcome of the fight 7 February was a kind of preface to the main battle, which ended up just as unsuccessful. But for the French army, the impossibility of defeating the Russian was akin to defeat: so far, no such battle has brought such a result! For the Russian army, the February 8 battle north of Preussisch-Eylau, where the main forces took positions, while the rearguard covering them died in battle with the French vanguard, became a victory, albeit an informal one. 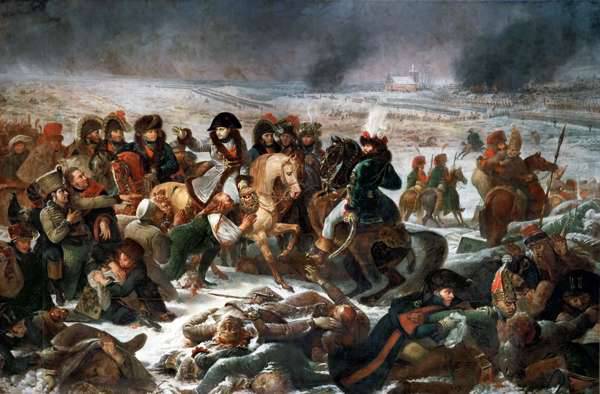 "Napoleon at the Battle of Eylau 9 February 1807 of the Year", Antoine-Jean Gros
Before the battle, the sides had approximately equal forces: about 70 thousand people with four hundred guns. Alas, the exact data varies depending on the source and its political coloration, since both sides sought to prove that they fought with the superior forces of the enemy. But even with equal forces, the advantage was on the side of the Great Army: although formally it was created in the 1805 year, but it consisted of troops who continuously increased their combat skills over the past decade. As a result, the battle turned into one of the first battles, where such a tactical technique as active defense was fully manifested.

The offensive was launched by the French, and at first it brought success: the Russian troops could not stand the blow and moved back. But the French army was unable to build on its success: the advancing units in the snowstorm went astray and went right under the Russian guns, which opened hurricane fire on them. Seeing the turmoil in the ranks of the attackers, Bennigsen threw the cavalry and grenadiers into the counterattack, almost reaching Napoleon's headquarters at Preysish-Eylau cemetery. From the probable captivity of the emperor saved only the cavalry of Murat, who rushed into a suicide attack.

Due to the fact that not a single side could create conditions for a strategic strike, the troops very soon lost the opportunity for maneuver, and the battle turned into a colossal melee. “More than twenty thousand people on both sides thrust a triangular tip into each other,” Denis Davydov describes the slaughter nightmare. - Crowds fell. I was an obvious witness of this homeic carnage and I will truly say that in the course of the sixteen campaigns of my service, during the whole era of the Napoleonic wars, a justly named epic of our century, I did not see such a carnage! For about half an hour no cannon-guns, no rifle shots could be heard, either in the middle or around it only an inexpressible rumble was heard intermingled and slaughtered by thousands of brave men. Piles of dead bodies were showered with fresh piles, people fell one upon another by hundreds, so that this whole part of the battlefield soon became like a high parapet of a suddenly erected fortification. ”

The inability to conduct a normal maneuverable battle and the rapidly growing losses forced both the Russian and the French army to cease active operations in the evening. The damage was so heavy that when General Leonti Bennigsen began to retreat from Preussish-Eylau closer to the night, Napoleon had neither the strength nor the ability to pursue him. “The French army, like a shotgun of a warship, with broken mast and torn sails, was still swaying, but unable to take one step forward either for battle or even for prosecution,” Denis Davydov described it figuratively.

By this time, the losses of the Great Army were, according to various estimates, from 18 to 30 thousands of people killed only. Not less lost and Russian. “Our damage in this battle extended to almost half the number of those who fought, that is, to 37, thousands of people killed and wounded ...” writes Denis Davydov. - There was no example of such damage in military annals since the invention of gunpowder. I leave the reader to judge the loss of the French army, which possessed a smaller number of artillery against ours and which was repelled by two hot attacks on the center and on the left flank of our army. ”

The result of the battle of Preussisch-Eylau, or rather, his absence, each side interpreted his own advantage. "A friend of mine! Yesterday I had a big battle. I am the winner, but I have heavy losses. I consider the enemy's losses even harder. I write these two lines with my own hands, despite the fact that I am tired. Your whole Napoleon. 3 o'clock in the morning of February 9, ”the emperor of France wrote to his wife Josephine after a bloody battle. And in Russia 31 August 1807 of the year - that is, six months after the battle - a special cross was established to award officers who distinguished themselves in battle and presented to orders, but did not receive them. On the obverse of this gilded bronze cross, the phrase “For labor and courage” was struck; on the other, “Victory at Preish-Eylau. 27 gene. (i.e. January. - RP) 1807. ” This award received 900 officers who wore it in his buttonhole on the St. George ribbon. In addition, after the battle 18 officers from among its participants were awarded the Order of St. George 3-th degree, 33 officer-Order of St. George 4-th degree, and a few more people - the Order of St. Vladimir. The cavalry general Leonty Bennigsen, commanding the Russian army, received the highest award: 12 days after the battle, he was awarded the Order of St. Andrew the First Called. Ironically, in the Russia living on the Julian calendar, it was the day of February 8 1807 ...

Ctrl Enter
Noticed oshЫbku Highlight text and press. Ctrl + Enter
We are
Poet partisans. Denis V. DavydovVasily Kashirin: Russian troops entered Bessarabia and liquidated the Bujak Tatar horde at the start of the Russian-Turkish war of 1806-1812.
8 comments
Information
Dear reader, to leave comments on the publication, you must to register.