February 18 2016
32
American armory Tromix Lead Delivery Systems is primarily known as a manufacturer of ammunition and spare parts for small arms. In addition, several years ago she became famous for her “double” rifle Siamese M16 (“Siamese M16”). This weapon was created in an experimental manner and did not go into series, however, it attracted the attention of shooters and weapon lovers from around the world. Having checked the original rifle, the development company continued the production of other serial products of a less bold design. However, the development of pilot projects did not stop.


Despite the absence of any real prospects, the specialists of the Tromix company, headed by its head Tony Rumor, continued the development of the original idea. In the new project it was planned to combine not two, but just three rifles of the AR15 / M16 family. This version of the "Siamese rifle" was supposed to be based on the ideas of the basic Siamese M16 project and differ in some features directly related to the number of basic rifles. The result of the work started after the development of Siamese M16, was the emergence of an even more unusual and non-standard project. The new development was called Trimese-16, combining information about the number and type of base rifles, as well as hinting at the origin of the Siamese M16.

Again, it was proposed to take several serial rifles based on the AR15 platform and connect them with each other using several new parts. As in the previous project, a set of mounts was provided to ensure the correct mutual position of the weapon, as well as several details for combining rifle mechanisms. Thus, like its predecessor, the “triple” rifle had to have separate automation mechanisms, etc., as well as gas engines connected in an original way. 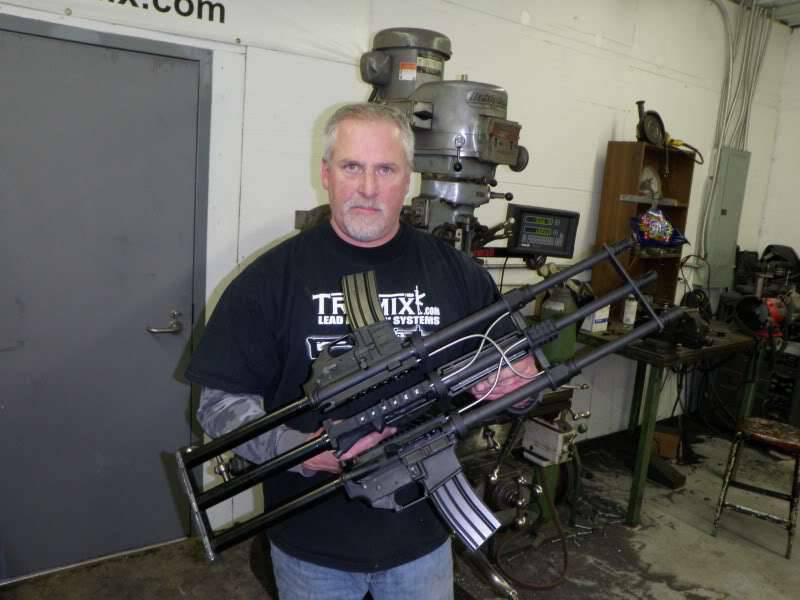 Tony Rumor with a Trimese-16 rifle

The main units of the "triple" weapons Trimese-16 are three rifles of the AR15 family. In addition, several parts were developed for their connection, including a set of gas tubes. Before assembling a single design, it was proposed to modify the existing rifles in a special way in order to ensure their desired appearance.

The central rifle was supposed to keep the maximum configuration in comparison with the side. At the same time, the upper overlay of the fore-end and the butt and the gas tube were removed from it. On the upper surface of the receiver remained Picatinny rail, which could be used to install sighting equipment. In addition, a small bar was in front of the forearm. Automation, trigger mechanism, ammunition systems, etc. remained the same.

Side rifles, as well as the top in the case of "double" weapons, lost the mass of various parts. They completely removed the forearm, removed the butt and pistol grip. Also dismantled the gas tube and most of the details of the firing mechanism. It should be noted, side rifles also retained the upper bar for the sight, but the use of this device for its intended purpose was not possible due to the specificity of the relative position of the three rifles.

To connect the three rifles between them were proposed several parts. On the muzzle parts of the trunks set plate with three holes and clamps. Another strap was fastened under the three vapor nodes. A stock was also used based on the design of the basic Siamese M16 units. It consisted of three tubular casing connected to a common metal back plate. During the assembly of weapons in the tubular parts were inserted into the covers of the return spring. The composition of the fastening elements ensured the required rigidity of the structure, and also ensured the retention of all weapons in the correct position. 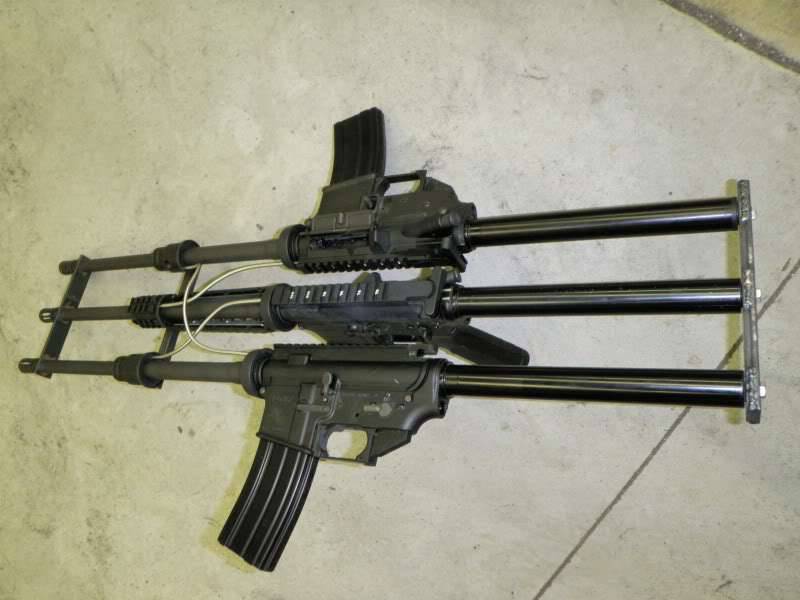 The central rifle was located in space in a normal normal position. The left (from the point of view of the shooter in the application) rifle was piled on the right side of the 90 °. The right-hand rifle, in turn, turned the 90 ° to the left. Thus, the shop of the central rifle was placed in the shaft below, and the side received ammunition on the left and on the right. The direction of the ejection of the spent cartridges also differed: right-up for the central, down for the left and up-left for the right.

The Trimese-16 triple rifle has received three new gas tubes of complex curved shape. Unlike the first project, tubes of different shapes and sizes were used. The size and shape of these parts was due to the need to connect three rifles at once. At the same time, the flue unit of the first rifle was connected to the barrel of the second one, the second gas outlet was connected to the third box, and from the barrel of the third rifle the tube went to the automation first.

Automatic rifles remained the same. Its main elements were a rotary locking slide and a return spring. The trigger mechanisms were different for different rifles. So, the central one had a complete set of all parts, and the side ones were simplified (according to other data, they did not have USM at all). Thus, fire control had to be carried out using the trigger of a central rifle. USM central rifle was also responsible for fire mode and blocking the descent. 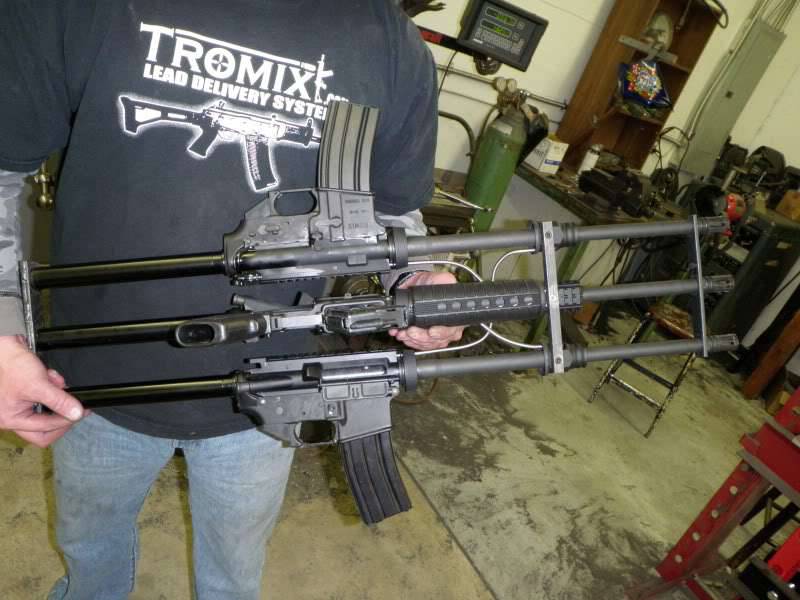 The principle of operation of such weapons in general has not changed, but was refined due to the use of three rifles. Having placed three stores in the receiving shafts, the central rifle should have been brought in (the side shots were not required). After that, you could remove the weapon from the fuse and fire. By pressing the single trigger of the entire system, the central rifle fired. At the same time, the powder gases were led through a curved tube into the right rifle. Under the action of gases, the shutter of this rifle retreated to the rear position, then returned to the front and a shot was fired. Gases from the right barrel entered the left rifle, which produced a new shot and diverted gases into the center. It was only after the shot of the left rifle that the liner was extracted from the central weapon and then reloaded. The next shot from the central barrel was recharged left and right, followed by firing.

The proposed method of interaction of the three rifles provided consistent firing of all barrels. In this case, instead of the classic single fire, a volley of three consecutive shots was fired. An automatic fire was also conducted alternately from all trunks, until the shooter released the trigger.

According to reports, the triple version of the "Siamese M16" did not receive sights or other additional equipment. In addition, there is no information about the testing of these weapons and the firing of them. Nevertheless, the available data allow us to make an assumption about the main features of Trimese-16. Due to the use of connected gas engines operating in series, the rate of fire of all three rifles could not exceed the analogous parameter of such weapons in the base configuration. The main characteristics of the fire also had to remain at the level of the base rifles. 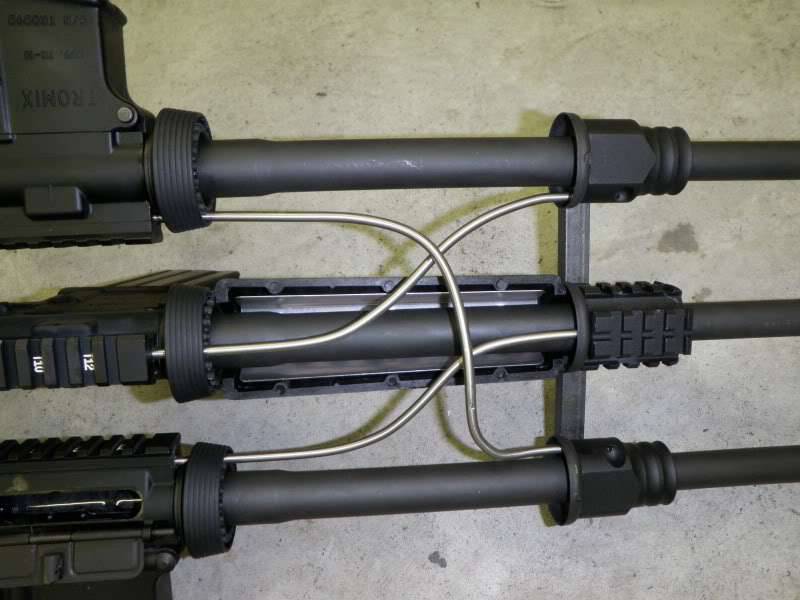 The second draft of the weapon system, built on the basis of several serial rifles interconnected, was purely experimental. For this reason, the developers did not count on widespread acceptance, nor on orders from interested shooters or various structures. Apparently, such an attitude to his project was even to a certain extent justified. So, Tony Rumor, who designed both "Siamese" rifles, spoke of his tri-stemmed offspring Trimese-16 without much respect. On one of the Internet forums, he noted: I also built a three barrel version for quite a few reasons (“I also built a triple barb, but for several reasons it turned out to be decent nonsense”).

The idea of ​​refining and joining together three independent rifles in itself is too bold and unusual for potential use in practice. Nevertheless, it is quite capable of leading to the emergence of an original and unusual weapon, even if it is deliberately doomed to be unpromising technically a curiosity. Despite this, the company Tromix still produced at least one sample of the "triple" rifle Trimese-16, which, according to its creator, turned out to be "decent nonsense." Probably, the resulting sample was questionable, even considering the purely experimental nature of the project.

The “dual” and “triple” rifles of Tromix could hardly go beyond the testing of prototypes, which happened in practice. However, they were a good demonstration of an unusual and even somewhat amusing approach to the modernization of weapons and the creation of new models. They can be considered completely useless, but interesting technical curiosities that complement the development of modern small arms.

Ctrl Enter
Noticed oshЫbku Highlight text and press. Ctrl + Enter
We are
Berthier rifle - a rifle for the Zouav and all the restTromix Siamese M16 Experimental Rifle (USA)
32 comments
Information
Dear reader, to leave comments on the publication, you must to register.