February 15 2016
24
The AR15 rifle is deservedly considered one of the best representatives of its class, which, in particular, is confirmed by a large number of different samples at its base. Weapon, based on the AR15 platform, is in service with many countries, and is also in demand among civilian shooters. In connection with this popularity, the development of family weapons continues, with the result that new models of small arms, including unusual ones, appear.


At the beginning of the two thousandth, the American company Tromix Lead Delivery Systems, engaged in the release of ammunition and spare parts for weapons, introduced a new version of small arms based on the popular platform AR15. This project did not pretend to mass production and delivery to customers, since it was created solely as an experiment. The result of the work was the emergence of new weapons of non-standard design, based on existing units. This sample received the designation Siamese M16 ("Siamese M16"), fully revealing the essence of the basic idea. In addition, in the official materials of the company, this project received the title of "the craziest development from Tromix".

The main idea of ​​a non-standard project developed by the founder and head of Tromix Tony Rumor was the unification of two standard-design AR15 / M16 rifles into a single product. They were proposed to join with each other, as well as combine some of the main units. In this way, it was possible to simplify the design of the Siamese M16 to a certain extent, as well as to provide a non-standard appearance that attracts attention. Finally, it was not without some increase in the fire characteristics of the weapon, due to the use of two basic rifles. 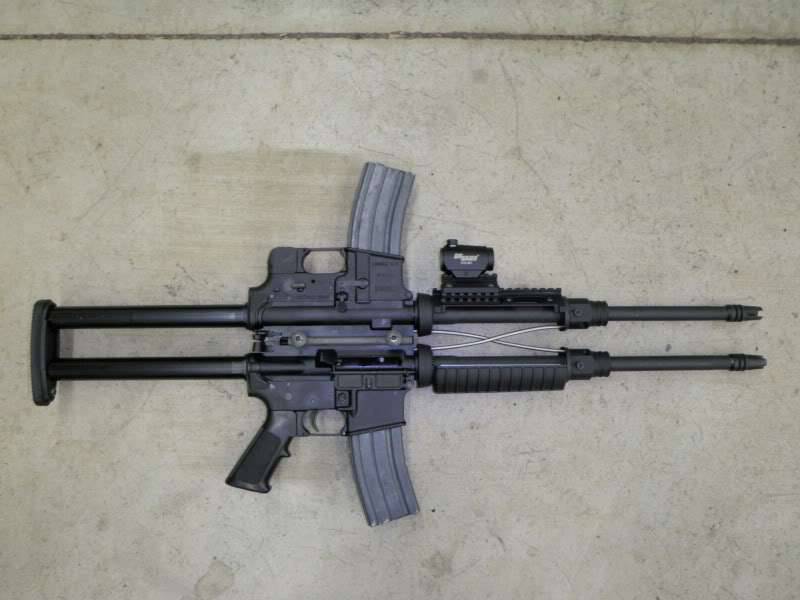 To assemble the prototype of the Siamese M16 dual rifle, Tromix had to re-develop and manufacture just a few parts. To connect the two rifles was developed detail that is compatible with Picatinny rail. Two gas tubes of complex curved shape, designed to ensure the correct automation of two rifles, were also made. Finally, a new butt of simplified construction appeared, also connecting two base rifles.

The basis of the product "Siamese M16" are two AR15 family rifles, which, when reworked, lost some of the details, and also received new ones. However, not all the improvements were “symmetrical”: the composition of the parts removed or added was not the same for both base rifles.

The lower rifle of the complex has lost the upper lining of the forearm and the existing gas tube. In addition, she was removed from the butt. All other parts, including automatics, ammunition system, firing mechanism, etc. stayed in their places. Despite the preservation of the main units, some features of the mechanisms were reworked taking into account the use of a second rifle connected to the bottom.

The upper rifle of the Siamese M16 system has undergone other changes, affecting a greater number of nodes. From it also dismantled the top cover of the forearm, gas tube and butt. In addition, she lost the pistol grip, and from the bottom of the receiver parts of the firing mechanism were removed. Inside the receiver were only the bolt group, the return spring and other parts responsible for the operation of automation, moving the cartridges and shooting.

The upper and lower rifles were connected with several parts. So, on the Picatinny rail on the upper surfaces of the receiver boxes installed a common shoe. The return spring tubes, in turn, were fitted with additional tubular housings, interconnected by means of a back plate. The ability to adjust the length of the butt, in contrast to some other modifications of the AR15 rifle, was not envisaged.

The most important parts connecting the two rifles were two new gas tubes of complex curved shape. Their size and shape were designed so that the tube connects the barrel of one rifle and the receiver to the other. Thus, when fired, powder gases from the barrel of one rifle should have been fed into the receiver of its “Siamese twin” and vice versa. The original principle of operation of automation was based on this. 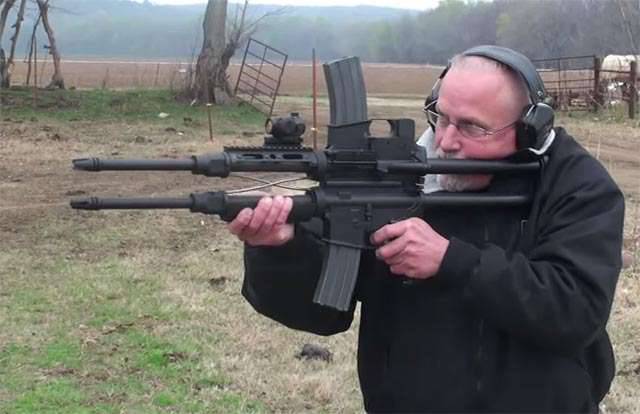 Tony Rumor, the designer of the Siamese M16, is firing. Frame from video

With the exception of the cross-connection of gas engines, the automatics of the rifles did not undergo any changes. The bolt group was supposed to move along the receiver under the pressure of powder gases from the barrel, coming through the gas tube. The barrel was locked by turning the bolt. The lower rifle received a full trigger mechanism with a three-position flag, responsible for blocking, single or automatic fire. The upper rifle, according to various sources, received a simplified trigger with a fuse, or even lost all such details, which was connected with the original principle of simultaneous operation of two rifles.

For the supply of ammunition, it was proposed to use standard detachable box magazines on 30 cartridges or other compatible products. For installation of shops on rifles reception mines remained. At the same time, the mine of the lower rifle was traditionally directed downwards, and at the top it was located with a hole upwards. The ejection of the sleeves also had to be done in different directions. The bottom rifle window was on the right, the top - on the left.

"Double" rifle received sights. To do this, on the forearm of the upper rifle, we provided a Picatinny rail, on which a serial collimator sight was mounted with a shift to the right. There may be doubts about the convenience of aiming, but the developers claim that the rifle units do not overlap the shifted sight and do not interfere with its use.

The original design of the Siamese M16 system was associated with non-standard principles of operation of automation, for the implementation of which the rifles received a new gas engine with intersecting tubes. It was assumed that the experimental sample will be able to fire from two barrels alternately. In this case, instead of a single fire, a volley of two shots was envisaged, and the automatic fire was planned to be fired from two barrels in turn.

For firing from the Siamese M16, the shooter had to place two magazines in the shafts and cock the mechanism of the lower rifle using the handle, after which it was possible to remove the weapon from the safety catch. When you press the trigger of the bottom rifle (on the top it was absent) a shot occurred. Powder gases from the barrel of the lower rifle along a curved tube came to the upper piston and actuated its mechanisms. In this case, the bolt rolled back, then went forward, sent the cartridge and fired, because the trigger was not blocked USM. Gases from the barrel of the upper rifle were fed to the piston bottom and cocked its mechanisms, at the same time throwing out the sleeve. After that, the “double” rifle could make a new pair of shots. With the single USM mode, a new trigger pull was required to continue shooting, with the automatic one a long press was required. 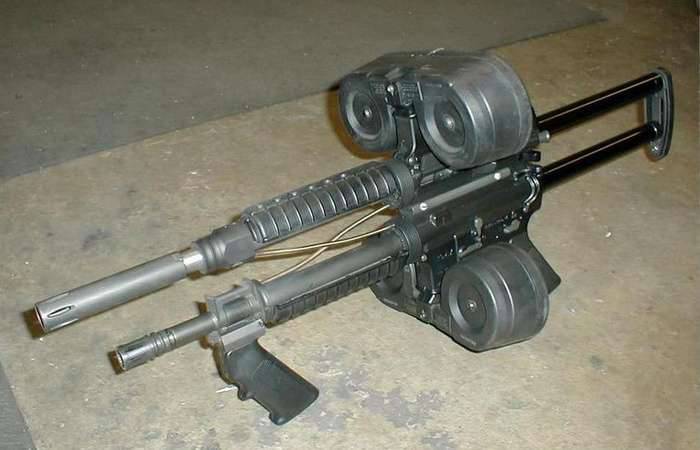 Unusual rifle Siamese M16 could fire as a single (or rather, double) shots and bursts. Technical rate of fire remained approximately at the level of basic rifles. Also, the basic parameters of the bullets produced did not change. Maintaining the main characteristics was associated with the design of gas engines. Both rifles could only fire alternately, and also depended on each other's powder gases, due to which an increase in the number of barrels did not lead to a proportional increase in the rate of fire.

The project “Siamese M16” was created on its own initiative and without any plans for mass production, not to mention the participation in competitions of state structures. In this regard, only a few of the original weapons were manufactured (according to some information, only one copy, which was further developed). After the first demonstration, the “dual” rifle underwent some modifications aimed primarily at improving ergonomics. So, in one of the versions of the project it was intended to use the front “tactical” handle. In addition, new flame arresters and muzzle brakes were used. Finally, the famous photos of Siamese M16 with two high-capacity stores like Beta C-Mag are known.

Appearing as an experimental model, not claiming any contracts or awards, rifle Siamese M16 attracted the attention of shooters and weapons lovers around the world. Tromix specialists with minimal modifications managed to combine two serial rifles of the AR15 family into one fully functional weapon. Naturally, the specific appearance did not allow him to compete with "ordinary" samples, but helped to take a place in stories small arms. In addition, based on the developments of the Siamese M16 project, an even stranger weapon was created later that is of no less interest.

Ctrl Enter
Noticed oshЫbku Highlight text and press. Ctrl + Enter
We are
Tromix Trimese-16 Experimental Rifle (USA)M16 is a popular assault rifle and global brand.
24 comments
Information
Dear reader, to leave comments on the publication, you must to register.