February 9 2016
330
The Dagestan Khasavyurt, which many Russians associate with, to put it mildly, dubious 1996 agreements of the year, has recently identified itself as a hotbed of tension. The leading Russian media apparently thought that the Khasavyurt events of the day of today's special attention are not worthy, and as a result it turned out that there was no problem in this North Caucasian city. But in reality, the situation in Khasavyurt cannot be called calm at all, and if the problem is kept silent, then this is hardly the case when the problem can “resolve” itself. So what are we talking about?


And talking about the fact that in Khasavyurt recently there have been several protests of representatives of the local population at once. People walked through the streets of the 140-thousandth city with an expression of obvious discontent on the harsh faces, the outrage of which, as they themselves announced, was caused by the closing of the so-called “northern” mosque. The severity of the faces of some disgruntled, which draws special attention to themselves, hid the mask. 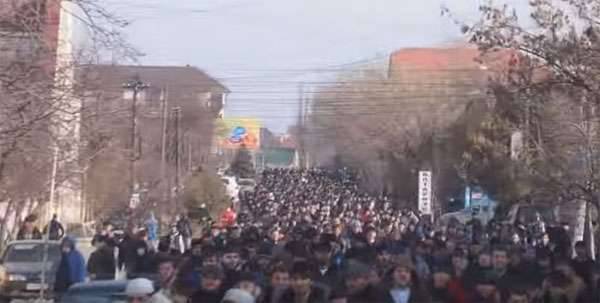 One of the protest processions gathered, according to the most modest estimates, up to 7 thousands of people. Basically, these are strong men and young people who, shouting “Allah Akbar!”, Walked along one of the central streets of Khasavyurt, stopping at a mass prayer arranged right on the roadway. Flashing cars and hooters passing by cars showed clear solidarity with the marching in the direction of the mosque. It was the height of the working day ...

The closing of the “northern” mosque in Khasavyurt was made on the evening of January 31. Law enforcement officers brewed a metal front door, which served as an impulse to anger. The Dagestan police do not publish detailed information, but from short publications made on social networks and on a number of regional media resources, it was found out that this is a Salafi mosque, in which ideas were preached, to put it mildly, not quite close to the canons of classical Islam.

For reference: Salafis (by definition, the Salafis themselves) are representatives of the Sunni religious group who reject any innovations in Islam that (innovations) appeared after the death of the Prophet Mohammed. Salafists profess the so-called proto-Islam, and their attitude to the modern image of the Muslim religion is not particularly favored. Salafia (the religious current itself) prohibits pilgrimages to the burial places of Muslim preachers, saints, since such a pilgrimage is considered to be "worship of the dead." Salafi interprets the conversion of a person to the righteous and the prophets (not only to Muhammad) as a manifestation of polytheism and deviation from the norms of Islam. Salafists are trying to resolve any issues of public relations on the basis of an appeal to the Qur'an, virtually ignoring any kind of social, political and civic (secular) activity. Salafia forbids Muslims to enter into conflicts with each other, but in some cases the conflicts that arise are easily explained by the fact that "Muslims have ceased to be Muslims and have become apostates." In general, the principle is approximately the following: who expresses a religious opinion that is different from Salafi’s is a “non-Muslim” ... In some cases, Salafists are associated with Wahhabis.

According to law enforcement agencies, in Dagestan there are quite a few so-called Salafi mosques, in a number of which recruitment of members to certain extremist organizations has been and continues to be carried out. According to unverified data so far, it is on these religious sites that a kind of work is being carried out with parishioners, the ultimate goal of which is to send a replenishment to the ISIL ranks in Syria and Iraq, for example, through Turkey.

For obvious reasons, representatives of Salafi mosques deny any involvement in the conduct of this kind of work, stating that their task is not recruiting into the ranks of terrorist structures, but quite the contrary - trying to dissuade young people from leaving the “forest”.

According to the Dagestan portals, December 26 of last year, law enforcement officers detained the imam of the very “northern” mosque, around which all the fuss is today. The detention was carried out on the grounds that the Imam had unlawfully stored weapon, including such as (attention!) grenade launcher. The colleagues of the imam "in the shop" immediately declared that the imam was not guilty, and that he was thrown at the grenade launcher by those who want to settle with him (and almost with all the believers of Khasavyurt). Law enforcement agencies are currently investigating how a grenade launcher turned out to be a person who calls himself a champion of Islamic morality and the spiritual mentor of thousands of believers in the city, and why this man preached views far from the canons of religion.

While investigations are being conducted with respect to the arrested imam, in the muftiat of Dagestan it was proposed to appoint the guardian of the “northern” mosque from among those clerics who represent classical Islam and are included in the muftiyat itself recognized by the republic. Apparently, the Salafi groups decided that the “canonical” imam was not the person they wanted to be the guardian of the “northern” mosque. After some time, Muhammad Nabi Sildinsky took the place of the watchman, who in the muftiate of Dagestan was perceived as arbitrariness. And on January 31, as already mentioned, the door to the mosque simply brewed. 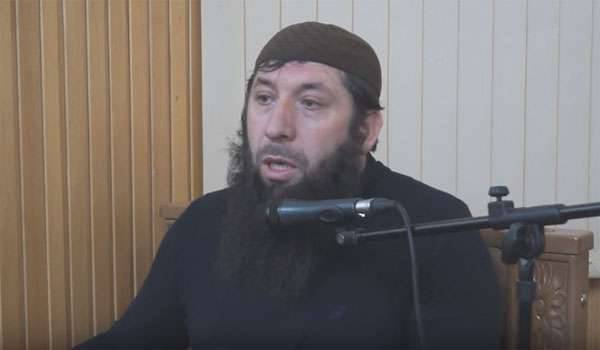 The aforementioned Muhammad Nabi Sildinsky organized a speech in which he demanded that the authorities return him access to the mosque.

From the statement of Sildinsky:
Now I sent a 10 man there - remove the weld, open this door. Allah will not leave it for nothing.

A very disturbing video from the scene in Khasavyurt, published in YouTube a kind of "Council of Scientists Ahly Sunna wa al Jamaa" with an indispensable Salafi nashid (religious chants). The mass character and the obvious organization of the action draws attention.

After some time, Mumamad Nabi Sildinsky called on all those dissatisfied with the closure of the northern mosque of Khasavyurt, as well as a number of other Salafi mosques of Dagestan (for example, the mosque in Shanghai - 29 in January) to gather together with guests in the eastern mosque of Khasavyurt and designate their position . Sildinsky said that for such a case "you need leave my job and postpone any personal matters. "

And this is a video of a special sermon in the Khasavyurt mosque, when the speaker calls the Muslims in the world of Jews and Christians (video from the YouTube channel “Caucasian Politics”) with exclamations of “kindness” on 2: 23: the actual culprits:

Among the Dagestani Muslims there are many who designate such preaching as heretic preaching, in turn, Salafist leaders declare representatives of classical Islam in the republic to be “heretics and polytheists”.

The situation is clearly alarming and demanding to itself, even if it is trite, it sounds like a balanced approach. For obvious reasons, those who continue to finance any attempts to shatter the situation in Russia, without disdaining to use religious tools, will be very happy to take advantage of the unrest in Khasavyurt.

As a supplement: last weekend in the Chechen Republic, next to Dagestan, the council of elders and muftis held a discussion on the growing number of Salafi preachers in the North Caucasus. As a result, the Chechen elders decided to recognize the Salafists as an extremist movement and to carry out the necessary work with the believers so that they could distinguish classical Islam from destructive ideology based on Wahhabism and other, to put it mildly, questionable ideological cults.

Ctrl Enter
Noticed oshЫbku Highlight text and press. Ctrl + Enter
We are
Results of the week. “I respect you, and you respect me, we are dear people”Situational analysis of the death of the MH17 flight (Malaysian Boeing 777), made on the basis of engineering analysis from 15.08.2014
330 comments
Information
Dear reader, to leave comments on the publication, you must to register.