Facts vs. Fantasy: The American Dream is Unattainable

February 9 2016
61
It turns out that nowadays there is not a single country on the planet where a conditional average worker could afford to live an ideal American life. As shown by the case study “The Red Pin”, the so-called American dream is simply not available. The average American lacks 842 dollars every month for the financial realization of a “dream”. And nothing says that Americans are waiting for a "bright future." Rather, it is waiting for ... the Saudis.


Reporter Andrew Sörgel, writing on economic topics, in US News and World Report spoke about an interesting study "The Red Pin". It turns out that average families in the United States cannot afford to pay for a house, car, and everything else, that is, for all the benefits that are connected with these citizens with the symbol of the “American dream”.

For many decades, living according to the standard of the “American dream” meant owning a home, a car, plenty of food, enough money, the ability to make trips with the whole family, and so on. Millions of people, not only in the USA, but all over the world, believed in the idea: hard work and life in the USA can turn this socio-economic “vision” into reality.

New research has shown that such a way of life is just a fantasy for most people. There is not a single country in the world, not excluding the United States, where the average worker could afford to “finance” the American dream. Experts from The Red Pin, a Canadian real estate company, found out.

The detailed study took into account not only the average local wages, but also the prices for calculating local costs for homes of average cost and average areas (for example, by US standards - 1.480 square feet); pay for electricity, high-speed Internet access, cars, gasoline; food for a family of four. The disposable income for periodic visits to restaurants, cinemas and various events was also taken into account.

Ultimately, the columnist writes, the researchers did not find on the world map a single state where the average citizen could afford all these costs combined. Moreover, average consumers in Saudi Arabia and Oman are in fact closer to funding stated social and economic goals than the average American.

The histogram below shows how many times the average citizen’s income in the top ten countries most close to the level of the so-called American dream should be multiplied. 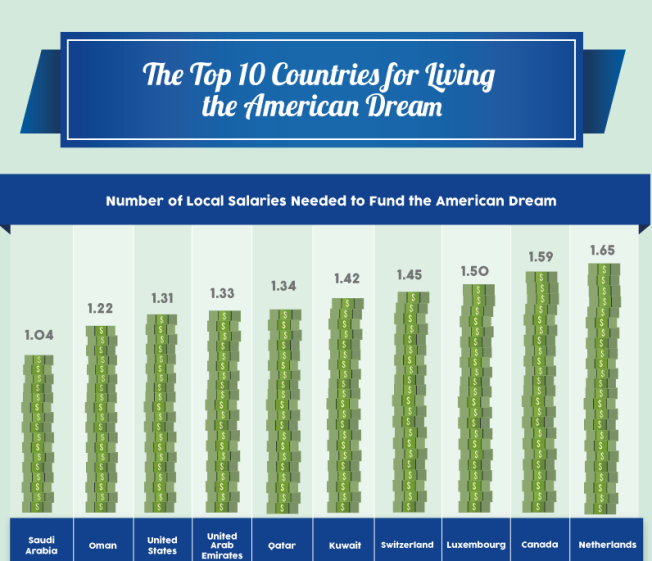 Saudi Arabia will need to raise the average wage only for 74 dollars in order to realize the American dream in the kingdom. But workers from the United States for the same purpose need hundreds of dollars of additional income every month.

“Strangely enough, the Americans were on the third place in the list: they would have to earn a dollar more on 842 a month to fulfill the dream in their own country,” the report says.

Currently, the average salary in the United States is (after taxes) about 3000 $ per month. As we see, she is not even enough to finance the “dream”.

It seems very unlikely for a journalist that the average American will be able to “finance” his dream in the near future.

Against the background of growing market uncertainty and a slight increase in incomes, not to mention the problem of growing diseases in the country, consumers may face financial constraints, especially in the area of ​​large expenses, such as buying a house, some experts believe.

The new study "The Red Pin", the columnist admits, most likely once again confirms the arguments about the slow but sure destruction of the middle class in the United States. Earlier this was proven by other studies.

A whole stream of data indicates a drop in real wages in the country. This happens "for many decades," said the journalist.

However, what is interesting is that the Organization for Economic Cooperation and Development has recently recognized the United States as the world’s number one power based on factors related to income generation. And this underlines the fact that the opportunity to “grab” the American standard of living is even less for those countries that occupy not the best places in the international community.

For example, Cubans will need to increase their income more than 95 times to achieve the “American dream”. At the same time, according to the study and the company “Numbeo”, whose data are included in the report of the Canadian company “The Red Pin”, the cost of living in Cuba is 33,45% lower than in the USA.

Do not dream about it and the Venezuelans.

And even Singapore is very far from ideal.

To live comfortably in Singapore, which in 2014 was named the most expensive city in the world for expats, it would require a salary that is four times the average American salary.

It turns out, let us add, even in a democratic world, citizens are not close to the American dream. And the USA itself is far from it by as much as 842 dollars. Moreover, experts believe that the gap between life and dream will only increase, as the incomes of US citizens are falling.

Another thing is interesting: in the American dream, incomes are much closer to those countries where democracy does not even smell. For example, Saudi Arabia in the study "The Red Pin" ranks first. However, as we think, with the exhaustion of oil reserves, the Saudis will quickly fall to the level of Cubans, who are in the tail of the list of “dreamers”.

As for Russia, it is simply bad for her to live the American dream.

Observed and commented on Oleg Chuvakin
- especially for topwar.ru
Ctrl Enter
Noticed oshЫbku Highlight text and press. Ctrl + Enter
We are
United Europe is preparing another trip to the eastStrangulation: the context, conduct and consequences of the American naval blockade of China
61 comment
Information
Dear reader, to leave comments on the publication, you must to register.