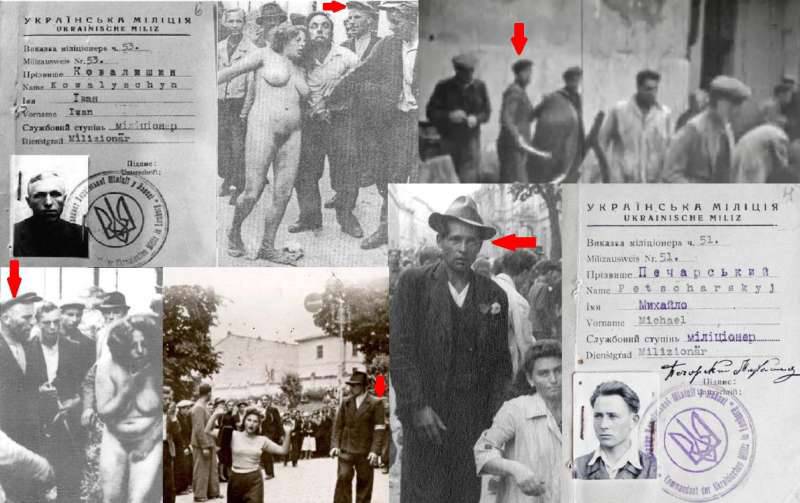 The Great Patriotic War brought pain and suffering to many peoples of the USSR. As a result of the deliberate policies of the invaders, millions of our compatriots were destroyed. A separate tragic page of the war are the Nazi massacres of the Jewish population. It should be noted that various collaborationists took an active part in the extermination of the Jews. Today, in the Baltics and especially in Ukraine, amid attempts to revise the outcome of the Second World War, the rehabilitation and heroization of collaborators is underway. These circumstances make the problem under study of particular relevance.

An important place here is taken by the reflection of the events of the beginning of July 1941 of the year that occurred in Lviv, when about four thousand Jews died (according to other sources, about seven thousand people died). Some authors categorically deny the participation of nationalists, others are convinced of the opposite. If Ukrainian historians categorically deny the participation in this tragedy of parts of the OUN, the Ukrainian police and the Nachtigall battalion, writing off everything to certain criminal and declassed elements, as well as Poles, the works of Russian and Western researchers are built differently. On the whole, the assessments of Western historians largely coincide with the opinion of Russian authors, who have made significant progress on this issue.

Among the reasons for such polarity of assessments and opinions, first of all, it is necessary to note the limited source base and the difference in interpretations of the same documents.

Up until the 1990s, most documents were virtually inaccessible to most historians, especially Western. This led to the specificity of the work of Western researchers, who operated mainly with secondary sources, experiencing a shortage of archival materials. The credibility of the emigre materials of the OUN-UPA, as well as memoirs, very often raised questions. The situation was aggravated by the lack of documents of the German occupation authorities.

With the collapse of the USSR and the opening of some archives, a new stage began in the study of the issue, a number of serious works appeared. In the West, Canadian stories of Ukrainian origin Ivan Pavlo Khimka, as well as the German scientist Grzegorz Rossolinski Libe, have become recognized experts in the study of the Lviv 1941 events of the year.

On the eve of the pogrom
It seems logical to consider the events on the eve of the Lvov pogrom. Due to the failure of the Red Army, in the direction of Lviv at the very beginning of the Great Patriotic War, the front line was rapidly moving eastward. During the first week of fighting, the advanced units of the Wehrmacht and the Ukrainian collaboration units, the Nachtigall sabotage and reconnaissance battalion as part of the German special-purpose regiment Brandenburg-800, approached Lviv.

30 June the city was practically occupied by the enemy. Together with the occupiers, the nationalist detachments of the OUN-B — Bandera — entered the city. Note that in the event of a war, the OUN-B had a specific tactic of the struggle for independence - the “policy of fait accompli.” Bandera assumed active actions to put their allies (Germany and its satellites) before a fait accompli, as a rule, not coordinating their actions in advance.

One of the first such "facts" was the 30 June 1941 events in Lviv. Deciding to take advantage of the situation in their own interests, Bandera proclaimed the Act of Uprising of the Ukrainian state. Y. Stetsko was appointed Prime Minister. The creation (restoration) of the Ukrainian state was declared, the main slogan of which was an orientation towards the ideas of Great Germany and its leader creating a new order.

The proclamation of this act was accompanied by a pogrom, monstrous in its scale and consequences.

What happened in the morning?

Now quite clearly established chronology of events. What was the impetus for the Jewish pogrom? On the morning of June 30, in Lviv prisons about 2,5 thousands of prisoners were shot. This provoked anti-Jewish actions. As noted by P. Khimka, at first, the angry relatives of the victims rushed to look for male Jews, forced them to dig out the dead. After the victims were recovered, the Jews were killed there, in the prison yard.

By the evening began a total pogrom. According to eyewitnesses of the events in which she herself had to experience the role of the victim, the Jewish women of Rosa Wagner, the mob mocked her and other women, beat them, kicked them, and grabbed her hair.

Such mockeries are well documented visually, since the Germans were shooting a film in Lviv at that time. It shows, for example, how the mob beat one woman and another pulled her hair down the street.

Ukrainian authors, while not denying the evidence of R. Wagner as a whole, appealing to her allegations of “mob” and “street punks,” point to the participation of the Poles in the pogrom. 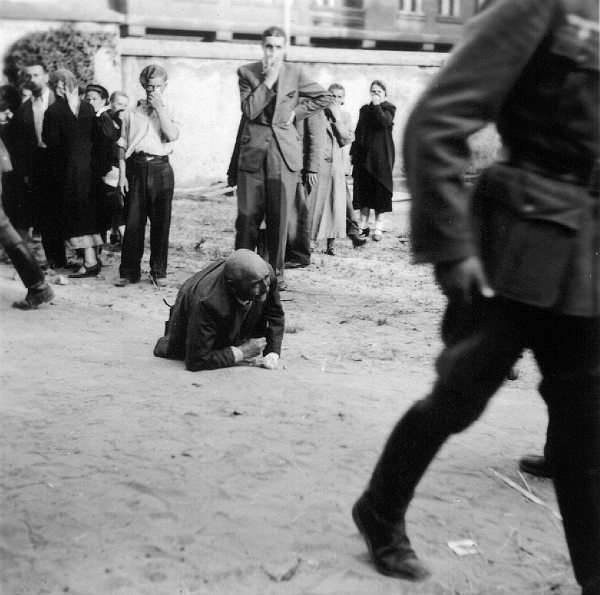 Today it is established that the Lviv pogrom took place from the second half of 30 in June until the end of 2 in July of 1941, and claimed the lives of about four thousand Jews, mostly male.

It is worth noting that one of the first orders of the nationalists in Lviv was the creation of the “Ukrainian militia”, which played a central role in restoring the new order.

In particular, in 2008, Bourdsom identified a former Ukrainian police officer, a certain Ivan Kovalishin, and recently historians identified M. Pecharsky in the same way (he is in the picture above). It is noteworthy that their stay in Lviv on the days described is also confirmed by the report of the head of the OUN hiking group No. XXUMX Timish Semchishin from July 111 on July 9.

It is noteworthy that R. Wagner, not knowing exactly who the pogromists were, called them simply “Ukrainians”. Many other evidences of surviving Jews about the pogroms in Western Ukraine are also called pogrom-makers "Ukrainians", without specifying who those Ukrainians-pogromists were.

Many witnesses noted that the policemen participating in these actions "had identification marks of blue-yellow color on their hands."

Similar actions took place in Volyn, and especially in the Baltic States, where the newly created police, arresting small Jews, handed them over to the Einsatzgroup for subsequent execution.

Despite the absence of documents testifying to the concealment of the Lviv events by the Germans, Western historians are unanimous in their opinion that the arrests of Jews and the subsequent harassment and murder were carried out with the tacit consent of the German authorities.

Noting the cooperation of the OUN and the Germans in conducting anti-Semitic actions, the authors doubted the autonomy of the actions of anti-Semitic actions, arguing that in this way they tried to win a positive attitude of the Germans to the idea of ​​Ukrainian independence. The reasons for the contacts of the invaders with the nationalists - the direct perpetrators of the pogroms - are also described in detail in the famous monograph of the American historian Timothy Snyder.

Note that Bandera sticking Nazi leaflets around Lviv: "People! Know! Moscow, Poland, Magyars, Jews are your enemies. Destroy them! Know! Your leadership is the Wire of Ukrainian nationalists, this is OUN. Your leader is Stepan Bandera" . After reading such appeals, the representatives of the new government literally saturate themselves with rage, and this intensified the pogroms.

The historian Rossolinsky-Libe established that the fifth and sixth Einsatzcommands shot about 2,5 — 3 thousand Jews. They were led to the stadium by the OUN-B militia. Ukrainian detachments from the OUN-B detachment seized Jews around the city, in their apartments and forwarded them to the stadium, and from there they were taken to the places of execution. At that time, there were about 150 thousands of Jews in Lviv. Of these, more than half were refugees from German-occupied Poland. "The Poles in the city were about 50 percent, the Ukrainians - 15-20 percent."

About the battalion "Nachtigall"

Separately, we will focus on the participation of the Ukrainian Nachtigall collaboration battalion in the events described. According to the assumptions of A. Dyukov, a well-known Russian researcher, "apparently, some of the Nachtigall servicemen were used to" pinpoint "opponents of the OUN in accordance with the" black lists ".

At the same time, the author cites the post-war memories of the former serviceman of "Nachtigall" Grigory Melnik and Ounovets Yaroslav Shpital, and also refers to West German judicial materials. For obvious reasons, Ukrainian historiography considers these materials evidence of "Soviet propaganda."

Western experts are also cautious about this issue, noting that neither the regiment Brandenburg-800, nor the Nachtigall battalion, nor R. Shukhevych anywhere in the materials of the Nuremberg Tribunal do not appear, although the events in Lviv were considered there.

In addition, subsequent trials in Europe also did not establish the participation of Nachtigall in the pogrom.

However, an important circumstance here is the fact that the information obtained after the war by the Soviet state security organs from the former members of the battalion and the OUN members who were convicting the battalion were not known to the parties to the proceedings.

Who participated in the pogrom: an attempt to hide the traces of the OUN

In April 2008, the Security Service of Ukraine officially distributed documentary information called "The Book of Facts", where the participation of the OUN in the Jewish pogroms, including in Lviv, was categorically denied.

Canadian scientist of Ukrainian origin Mark Tsarinnik exposed the fake, citing convincing evidence. In particular, he noted that the typewriter, "which was supposedly a chronicle of the events in Lviv on July 1941, said how the SS called for" the OUN to take punitive actions against the Jews, but Bandera did not agree to this. " Having carefully read the fragment of the "Book of Facts", the author paid attention at the end to the information that was strange for 1941: "Bandera was concluded almost until the end of the war."

But the attentive historian Tsarinnik immediately noticed a very strange detail. If everything described was a 1941 chronicle of the year, how could the phrase about Bandera, concluded before the end of the war, appear? As soon as the historian gave wide publicity to this fact of apparent inconsistency, this five-page version of this document, which was posted on the SBU website, was cut down to three.

As you can see, falsification stories encouraged by the modern Ukrainian government and occurs at the highest level, not to mention the scientific community.

What else have historians discovered

Many Western authors (G. Rossolinski-Libe, P. Rudling, T. Snyder) unanimously assert that it was the “Ukrainian government” J. Stetsko voluntarily expressed his desire to destroy the Jews of Ukraine and the main propagandist of the OUN-B Stepan Lenkavsky “defended the physical elimination of the Ukrainian jews Stetsko approved the elimination of the Jews and the expediency of using the German methods of exterminating the Jews of Ukraine in order to prevent their assimilation, etc. "(quoted by I. Khimka. Vidpovid Sergiu Lukyanenko about Roman Shukhevych).

In conclusion, it should be noted that this issue, despite the large number of sources and a large historiographic array, is far from the optimal interpretation and objectivity of the estimates. This can lead to the gradual disappearance of “white spots” and to a better, deeper knowledge of the mechanisms of behavior of large groups of people, especially against the background of a worsening moral and ideological catastrophe in Ukraine, which is based on the cult of hatred.

Ctrl Enter
Noticed oshЫbku Highlight text and press. Ctrl + Enter
We are
Eurointegration on the bonesThe UPA was like the army of Makhno - a peasant and often very cruel: interview of the historian Jaroslav Gritsak
37 comments
Information
Dear reader, to leave comments on the publication, you must to register.