Tricky comments. Crimea on the globe of Ukraine as confirmation of the diagnosis

February 8 2016
119
Another submission from Ukraine. And again the Crimea. Yes, many readers already openly say that they say they are tired of reporting from a famous place. And agree, in their own right. For nothing new, in the sense of clever, from these edges will not arrive. However, there is a nuance. And before proceeding to the question, I want to give my personal comment on what is happening in Ukraine. Or in Ukraine. 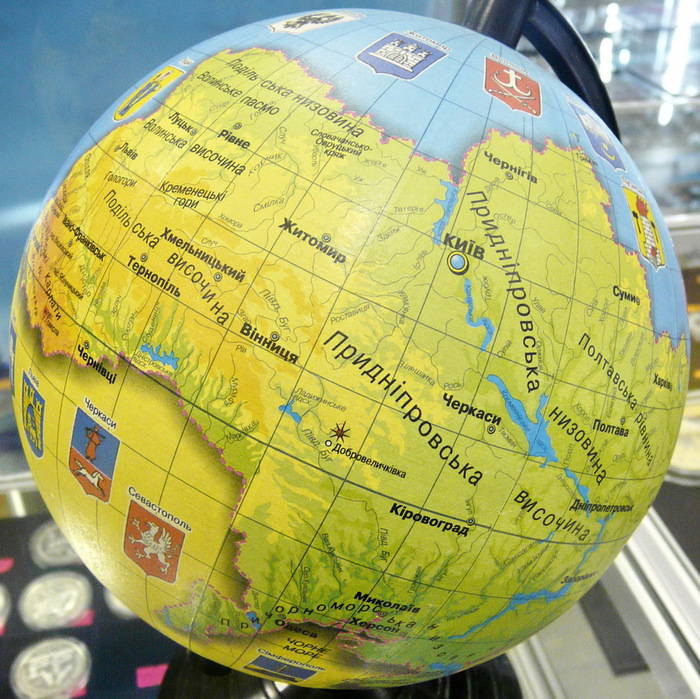 So, at the beginning of my post-army work, I worked for some time in the regional mental hospital. That is, in a madhouse. And most recently I realized that all this Ukrainian disgrace reminds me. And it looks like a madhouse. Moreover, this is where the mini-coup took place and the power was seized by the patients.

Say what is common? Yes, a lot, unfortunately. In fact, the picture is similar. After all, you understand that in the event of such an emergency, there will be no special oddities. Vegetables as they sat in the chambers with soft walls, and will sit. They are not interesting to anyone. And no one will let the wild ones loose, for the wild ones are controlled under the nose. And if by the first time they are released, they will be driven back to the wards.

And the staff will continue to work. Cooks will also cook food (if they don’t, it will be hot for everyone), plumbers watch the water and heat, electricians change light bulbs and so on.

And on the several monkeys enthralled in the office of the head physician no one pays special attention. Seem to be? Full Yes, in Russia this is unlikely. But in Ukraine, as practice shows, it’s all for itself.

So of course, it is necessary to pay attention to the processes occurring there. At least in order to catch the moment when it becomes quite hot. And patients will begin to crawl around the surrounding villages. Then catch, knit and prick. For now, watch carefully.

Now back to the globe.

Ukraine preoccupied with the creation of the tourist attractiveness of the Crimea and its economic growth. Calmly while we sit, we do not fall. All the most interesting will be ahead.

To this end, and in pursuance of Poroshenko’s decree on decommunization, the Ministry of Information Policy of the country plans to rename 69 of the Crimean settlements.

Now we are laughing and twisting our finger at the temple. Because as I repeat, to test the law banning communist ideology, the Ukrainian authorities are going on the example of the Russian Crimea.

Is everything as I said? In the office of the chief physician who have escaped into the wild geeks? Wait, that's not all. Here, right along Zadornov, the action unfolds.

The Ministry of Information Policy is confident that as soon as the Crimean cities and villages are returned to the pre-revolutionary and historical Crimean Tatar names, it will immediately become Ukrainian again and insanely attractive in terms of tourism for the whole world. The Ministry of Information Policy does not conceal that renaming 69 cities is only the “first stage of reform”, then about another thousand names will be offered for renaming. Now they are considered and come up with the rationale for renaming.
Funny Ridiculous. But sadly and for some reason, the hand reaches for the syringe, and in the brain suddenly pops up a table of calculating aminazin "four points" depending on the mass of the body.

In some of the documents read, however, it is indicated that this show will take place when the Crimea returns to the jurisdiction of Ukraine. But according to statements by representatives of the Ministry of Information Policy and the Ukrainian Institute of National Memory, lords Gromenko and Soldatenko, “in 6 months the procedure will be officially launched for changing geographical names in Crimea. Generalized proposals The Ukrainian Institute of National Memory will submit to the Cabinet of Ministers for consideration, and as a government bill, it will go to the Verkhovna Rada. The point is not only to get rid of the communist names in accordance with the law, but to restore historical justice. It should also give an impetus to the tourist and economic development of the region. ”

That is, the aforementioned gentlemen really want to push the Crimea to the path of tourist and economic development. Or, rather, push.

But is this the essence of the creation of the globe of Ukraine? Probably not. It seems that today there are many problems in Ukraine today, where it would be worthwhile to apply both hands and heads, as well as money. Renaming (even hypothetical) requires significant costs.

But in fact, it turns out that a bunch of Ukrainian officials, receiving salaries for taxpayers' money, are allegedly engaged in reform, which will have no concrete benefit for the state. It is clear that this is just another attempt to create a "globe of Ukraine." After all, in fact, the settlements will be called as the Crimean government and the government of Russia will decide.

In fact, a strange concern for the tourist attractiveness of the Russian region. Which, drawn by a certain spell, six months later suddenly becomes Ukrainian again. Of course, there is a small chance that the entire bureaucratic brethren will deal with these issues completely free of charge, that is, for nothing. But we were not born yesterday, so everything is clear and understandable here.

Imitation of vigorous activity on the verge of demonstrating outright oligophrenia in the idiocy stage.

We're giggling for now. And as they pogogochut in the Crimea, generally afraid to imagine. It's not about that.

Many Ukrainians in private conversations say that not everything in Ukraine is as bad as they say in the Russian media. Perhaps God forbid that it was so. Here it is only hard to believe, the further, the more.

But in general, I want to ask you this way, in a neighborly way: guys, are you still not tired of it yourself? Not? Well, then we still laugh. Let through tears.

Ctrl Enter
Noticed a mistake Highlight text and press. Ctrl + Enter
We are
Results of the week. “I am tired of these faces. There are many people, but no people. ”Results of the week. "God forbid to see Russian revolt, senseless and merciless!"
119 comments
Information
Dear reader, to leave comments on the publication, you must to register.