About Lenin, pray and the president

February 9 2016
224
Putin accused Lenin of the fact that it was his ideas about the creation of republics that lay at the basis of the collapse of the USSR. And immediately a handful of politicians of lower rank began to throw mud at the great thinker. A large crowd of Internet moths rushed there too - kicking and throwing mud at a long-dead giant. Apparently this self-esteem from these citizens rises sharply. They themselves write something more complicated than a post, much less create something they cannot. What are there 54 volumes of works or the creation of the state. Immediately surfaced famous photo of Lenin after a wound to the head and stroke. Of course, with tons of gloating and bullying of a terminally ill person. Apparently they themselves will look better in the case of injuries to the head with poisoned bullets and strokes.


And now the facts.

Why was Lenin at all against Stalin's idea of ​​autonomy?

Russia as a state, by the time the Bolsheviks finally took power, had de facto already collapsed into national formations. And it was not Lenin and Co. who had destroyed it, but the feudalist gentlemen, who were so sweet to the hearts of our liberals, whose backbone were the Freemasons, led by Kerensky, Guchkov and Co., including the top generals in the person of Alekseev, Ruzsky and Gurko! It was under them that the disintegration of Russia assumed not just chaotic, but acquired a “legal” and “legitimate” character, when the same Kerensky began to negotiate with the “Ukrainian independent citizens” from the UNR to recognize their bastard public education. By the way, this circumstance provoked another governmental crisis. Most of the Bolsheviks at that time were still in prison.

So, the national suburbs began to seethe and began to fall off. If the Bolsheviks, under those conditions, had bitten the bit and started shouting like “Denikin” about the one and indivisible one, then this separation would have become a final fact. And so, foreign elites had a chance to fuck the economic and military benefits from unity with Russia, and at the same time to rule on equal terms with Moscow. The nationalists threw bait: do not like it - leave. And for Lenin it was important to save the country. Somehow. On any conditions. The main thing is to gain time. Gather strength. But we will decide there the way it will be necessary - no one would utter a word. Here is such a simple and correct logic. And it’s not Lenin’s fault that the decision he made in emergency conditions was not reversed by his followers.

The treaty on the formation of the USSR from 30 December 1922 of the year, indeed, provided for the possibility of the republics leaving the Union. Item 26 "For each of the Union republics retained the right to free exit from the Union". However, until January 31, 1924, when the Constitution of the USSR was adopted by the Second All-Union Congress of Soviets, no one exercised this right and made such attempts. In the Constitution of 1924, the right to exit the republics was not written out as a separate clause, being mentioned in the first part of the declaration.

CONCLUSION 1: under Lenin, the possibility of exit of the republics was only declared. There was no real legal opportunity for this, since there was no prescribed exit mechanism. In the Constitution of the USSR option 1936, this rule remains approximately the same. The basic law did not give any references to the by-laws and the procedure for the release. In addition, a single union citizenship was consolidated, as well as the priority of union legislation over the republican one.

The USSR Constitution of the 1977 variant retained the republics ’exit rate from the Union, but even here the details of this moment were not written out and fixed. That is, the procedure for the implementation of this right was simply not provided. The rule has also been preserved that “in the event of a disagreement between the law of the union republic and the all-union law, the law of the USSR is in effect”, which implies the impossibility of the union republics to independently initiate the process of secession from the USSR, to institute referenda, to enact laws relating to this topic.

The 75 article gave an unequivocal interpretation: “The territory of the Union of Soviet Socialist Republics is one and includes the territories of the Union republics. The sovereignty of the USSR extends over its entire territory.". It is important to note that Article 78 gave a clear definition: “The territory of a union republic cannot be changed without its consent. The boundaries between the Union Republics may be changed by mutual agreement of the respective republics, which is subject to approval by the USSR». But not the Bialowieza agreements! The USSR Constitution possessed the highest legal force. All laws and other acts of state bodies were obliged to be published on the basis and in accordance with the Constitution of the USSR, and not an agreement in the Belarusian forest.

2 output.
a) Blaming Lenin alone in the declaration of independence of the republics is stupid. All the leaders of the USSR could equally cancel it, but did not do it;
b) The most important thing: until the very end in the USSR there was no real mechanism for exiting the republics.

Who actually laid the bomb.

We cite the key articles of the aforementioned Law.

But! Nothing like this has been done! The USSR was ruined by a group of conspirators, firstly, ignoring the requirements of the USSR Constitution, Union Law, and the results of the all-Union referendum on March 17 of 1991. Then the question was put to a popular vote: “Do you consider it necessary to preserve the USSR as a renewed federation of equal sovereign republics, in which the rights and freedoms of a person of any nationality will be fully guaranteed?” Of the 185,6 million citizens of the USSR, 148,5 million (80,01%) participated in the referendum with the right to vote. Of these, 113,5 million (76,43%) were in favor of preserving the USSR.

And the president of the RSFSR, BN, became one of the main conspirators and gravediggers of the USSR. Yeltsin. In 1990, he was elected to the post of chairman of the Supreme Soviet of the RSFSR. Announcing the program of activities, Yeltsin said: "I have never advocated secession of Russia, I am for the sovereignty of the Union, for the equality of republics, for the republics to be strong and for this to strengthen our Union." Two months later, in Ufa, Yeltsin proposed that the national republics of Russia take as much sovereignty as they could “swallow”. A year later, on June 12, 1991, in Russia, more precisely, in the RSFSR (Russian Soviet Federative Socialist Republic), the first presidential elections were held. Boris Yeltsin was elected, becoming the first and last President of the RSFSR. This is much later overthrown by MS. Gorbachev will say that B.N. Yeltsin betrayed him. But Mikhail Sergeevich did not show any will to resist the collapse of the USSR and to stop the unconstitutional activities of B.N. Yeltsin up to Belovezhsky collusion. Yes, in fact, there was no will, both presidents became figures completely dependent on overseas well-wishers. Where is Lenin and his bomb? There is more Yeltsin, Putin's spiritual and political father smacks.

Legally, the USSR no one collapsed. All that happened is a political technology, but not a legal process. Lenin has nothing to do with it.

A few years after the collapse of the USSR, the Special Commission of the State Duma of the Federal Assembly of the Russian Federation found that when signing the Belovezhsk agreements: “B.N. Yeltsin went on to flagrantly violate articles 74 – 76 of the USSR Constitution of 1977, Law of the USSR “On the procedure for resolving issues related to the exit of the Union Republic from the USSR”, articles of 4, 5, 68, 70, 71, 76 of the RSFSR Constitution of 1978 of the Year, 4 , 6 of the RSFSR Law of 24 of April 1991 of the Year “On the President of the RSFSR” and committed these actions against the will of the peoples of the RSFSR on the need to preserve the USSR expressed during the popular vote (referendum) held on March 17 of 1991 of the year ”. The Commission recognized that “in the actions of the President of the Russian Federation B.N. Yeltsin, aimed at the preparation, conclusion and implementation of the Bialowieza Accords, has sufficient data indicating signs of a serious crime stipulated in article 64 of the Criminal Code of the RSFSR (275 of the Criminal Code of the Russian Federation) and "consisting in treason against the Motherland by preparing and organizing a conspiracy to unconstitutional seizure of the federal government , the abolition of the then active federal institutions, the unlawful change of the constitutional status of the RSFSR. " However, there was no punishment ... 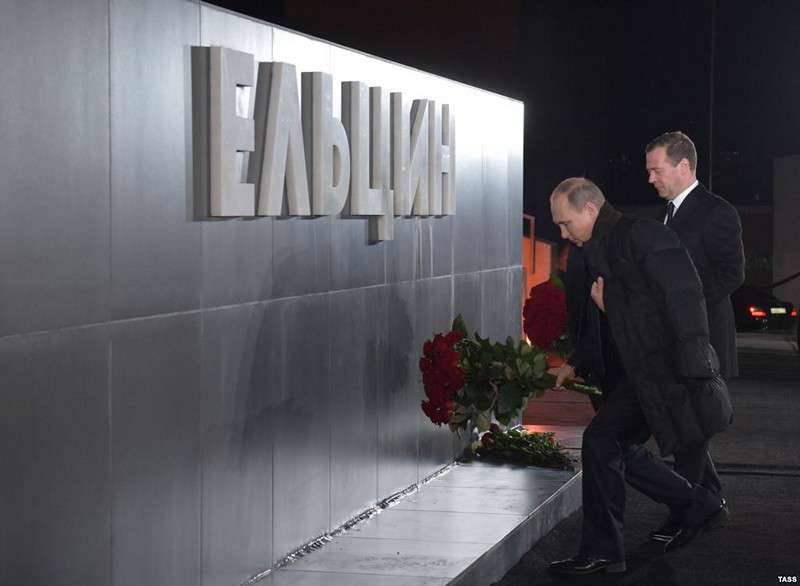 But something else followed by the will of Putin himself. At the end of last year in honor of B.N. Yeltsin in Yekaterinburg was erected a palace - the Yeltsin Center, which summed up the destructive activities of the former president of the RSFSR and the Russian Federation at his post and showed the face of the current government. At the grand opening of an expensive facility, President Putin said: "The center is not only a tribute to the first president of Russia, it was conceived as a reflection of an era in the country's history, an era of radical change, important, complex and contradictory." Putin turned to the wife of the first president of the Russian Federation, Naina Yeltsin, stressing that she deserved the respect of millions of people.

How many efforts has the head of Russia V.V. made over the last two years? Putin, to bring Transnistria, Abkhazia, South Ossetia, Donetsk, Lugansk and the whole of New Russia, pushed into the geopolitical abyss into the country? Devoted to Gorbachev, Yeltsin and other Judas people who are on their knees asking for Russia. If Lenin laid a mine, then what did the sappers do, and look to Western partners in their mouths? Heels erased, running for a political settlement of their own betrayal of Donbass.

Lenin’s criticism, however, was not accidental. The political, economic and social failures of the Russian elite, who are worried about one thing - the preservation of their positions, access to the budget and resources, and the lack of control of their rule are too obvious. Therefore, the ghost of communism in the person of Lenin was again released from the bottle of liberal oblivion in order to reveal another horror story for politically demoralized Russians brought to a state of psychosis.

The bankrupt political regime is looking for someone to blame its failure and immense guilt before Russia.

Ctrl Enter
Noticed oshЫbku Highlight text and press. Ctrl + Enter
We are
About Stalin and KhrushchevWhat you didn't want to know about England
224 comments
Information
Dear reader, to leave comments on the publication, you must to register.