Country priced in the metropolitan area, or What Latvia saw the directors of the scandalous film on the BBC

February 8 2016
51
On the evening of last Wednesday, the British television station BBC 2 showed the film “Third World War: at the command post” - a kind of pseudo-table game with the participation of ten retired high-ranking British diplomats, military and politicians. It makes little sense to retell the content of this wretched propaganda concoction, the script of which describes the fictional conflict between Russia and NATO. It is more useful to assess its consequences. 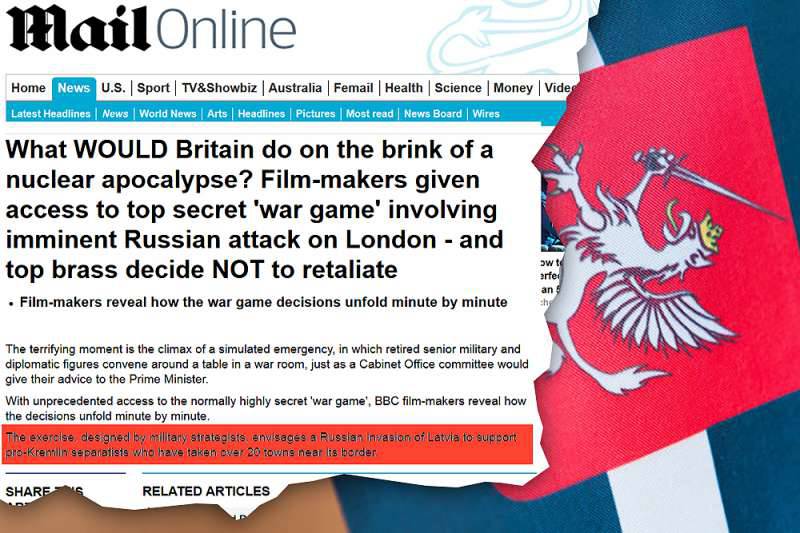 An unexpected result of the British Propaganda

About the film has already been expressed a lot of opinions, there were a variety of assessments. Russia's Ambassador to Latvia, Alexander Veshnyakov, called the picture of a British television company a dangerous provocation. According to him, the script of the tape is completely far-fetched and pursues political goals - demonizing Russia, justifying requests for strengthening NATO forces in Europe and discrediting Latvian politicians who are open-minded to Moscow. Still tougher spoke about the BBC film 2 Chairman of the Russian State Duma Committee on International Affairs Alex Pushkov. He called it an informational crime.

Serious passions boil in the Latvian capital. Some were afraid of the Russian threat, which became the basis of the script of the British reality show. Others were alarmed by Britain’s unwillingness to defend its NATO allies. The film shows how at the command post the majority of participants voted against the use of nuclear weapons in Russia to protect Latvia. Even an offensive opinion for Latvians was expressed, they say, it is not necessary to organize a third world war because of a country whose population (1 973 700 people) is not much more than a decent metropolitan area.

Latvian Foreign Minister Edgar Rinkevics hurried to London to talk with the head of the British Foreign Minister Philip Hammond. Later, a spokesman for the Latvian Minister Martins Dregeris reassured the public: the film does not reflect the official position of the United Kingdom, and at a meeting with Hammond Rinkevich confirmed the readiness of the allies to defend any state of the North Atlantic alliance.

Behind brackets of anxiety of the Latvian Ministry of Foreign Affairs and government officials there was a problem actually Латгалии, the prospective excitement of which population became the first reason of all further imaginations of authors of the British statement. I must say that the protest processes in this province of Latvia are real and are already reaching the public level. While they are limited to social networks. Here an asset has been formed that develops the idea of ​​creating the Latgalian People's Republic (LC), its flag and the principles of forming autonomy are presented.

The scandalous film “The Third World War: in the command post” the Russian service of the BBC asked to comment on one of the authors of the idea of ​​autonomy of Latgale Vladimir Linderman. He called the film beautiful: “I think the authors pursued two goals: to blacken Russia and figure out how NATO can act in a military conflict with Russia. Involuntarily there was a third meaning. It so happened that the governments of Latvia and Estonia are exposed to instigators of the Third World War, because the conflict began with discrimination against the Russians in the Baltic States. The mood of the inhabitants of Latgale are depicted correctly. But now they will not dare to such protests. There (in the film) there is only one lie: in reality, there are no facts indicating Russia’s desire to take Latgale off. ”

Latgale in the British film presented as an exclusively pro-Russian region of Latvia. It is very close to the truth. Latgale borders on the Pskov region of Russia. The flow of the population in the border areas always creates a close in a homogeneous medium. There is nothing strange in the fact that many Russian live in eastern Latvia. According to the census of the year 2011 118170 people here (38,9%). In Latgale Poles (20806 pers.), Belarussians (15046 pers.), Ukrainians (3845 pers.). Other national groups are not numerous, and Latvians (Latgalian) census counted 139941 man or 46,0% of the population of the region.

It is noteworthy that the Latgalians are shown only in brackets to the titular nation, artificially expanding its base. The authorities believe that there is every reason for this. After all modern Latvian historians define Latgalians as a subgroup of the Latvian ethnos. However, independent experts are convinced: this approach has little to do with reality. The Latgalians have their own roots (Finno-Ugric with strong Slavic), their own language. (According to the evaluation of the Latgale Research Institute 150-200, thousands of people - residents of Latvia constantly use Latgalian.) Latvians and Latgalian people look at the sky differently. Some of them are Lutherans, others are Catholics. Hence the cultural differences.

Moreover, these differences put pressure on the Latgalians. The authorities react irritably to their attempts at self-identification. So it was, for example, with the publication of the Latgalian dictionary. He never received official recognition, and the Latgalian language does not have the right to teach in local schools. So it was with the scientific conference on the autonomy of Latgale that took place in 2012. On its organizers brought a dozen criminal cases, despite the fact that the discussion of the expected autonomy had nothing to do with separatism. He was not even remembered. In a word, instead of national harmony, everyday practice today is distinguished by the frank policy of the Latvian chauvinists to subjugate a distinctive ethnos.

This was reflected in the attitude of the Latvian authorities to the region as a whole. Once industrialized and prosperous, it has become the most depressed in modern Latvia. Added Latgale's problems and sanctions imposed on Russia by the authorities of Riga jointly and severally with the European Union. Losses from them are not officially announced. The head of the Latvian Ministry of Foreign Affairs, Edgar Rinkevich, even described the reports of multi-million losses of Latvian business as Kremlin information propaganda. True, experts from the department of Rinevich acknowledged losses from trade with the Russian Federation, which amounted to about 200 million euros, but were slyly explained by their economic recession in Russia itself.

Be that as it may, Latgale is degrading today. This is evident, above all, by the outflow of the population from the region. For example, over the past ten years, the largest city in Latgale - Daugavpils left one fifth of the inhabitants. Similar situation in Rezekne, Jekabpils, Kraslava and other cities and towns. It is not by chance that the mayor of Daugavpils, Janis Lachplesis, commenting on the British TV company’s film for the portal Rus.tvnet.lv, said: “The threat of unemployment for Latvia is more real than the military aggression of Russia”.

Janis Lachplesis explained his bleak conclusion in detail: “Every time when Latvian or foreign politicians and journalists come to Daugavpils and start looking for“ green men ”, separatists, extremists, agents, etc., the local leadership gives one and the same answer - the real threat is that because of the lack of children, schools have to be closed, the unemployment rate is higher, and wages and pensions are lower than in other regions of Latvia. ”

These social ills Latgalii British directors are not interested at all. As in such cases they say, the fed does not understand the hungry. Mayor Lachplesis complained about low pensions of citizens. In fact, the minimum payment in Latvia is only 70 euros per month. For British veterans, the base amount is somewhat different - on the order of 114 pounds (in terms of euro - 150). Only not a month, but a week. Multiply by four, we get almost ninefold difference in income, and not only from pensioners. It dictates the British arrogant attitude towards their Baltic NATO partners. Because Latvia for London - at best, as Latgale for Riga.

The worst comparison stems from the context of the scandalous film - the migrant metropolitan area. For him, and to fight something not worth it. But you can use it for your geopolitical purposes - as bait on hunting. The role is unpleasant and even humiliating for the Latvian authorities, however, it was she who deserved it today for her reckless anti-Russian policy.

Ctrl Enter
Noticed oshЫbku Highlight text and press. Ctrl + Enter
We are
Will the Great Wall save Latvia? Why build a fence on the border with Russia and Belarus?Republic of the former USSR. Latvia: years without “occupiers”
51 comment
Information
Dear reader, to leave comments on the publication, you must to register.