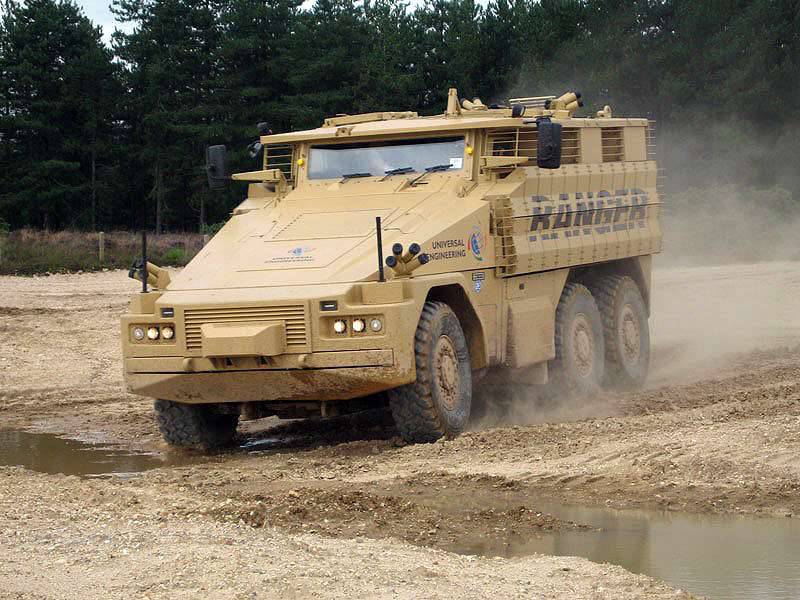 In recent years, a lot of machines with enhanced mine protection and improvised explosive devices of the MRAP category (Mine Resistant Ambush Protected) or as they are called in the United Kingdom Protected Patrol Vehicle (PPV) have been developed and deployed in the army.


Many of them are based on modified truck chassis, on which armored hulls are installed, providing protection to the crew from small arms weapons, shell fragments, mines and improvised explosive devices (IEDs).

While most of them have high levels of protection, many have poor off-road maneuverability, and their basic design means that they are not suitable for other roles and tasks.

Universal Engineering didn’t go further than the existing chassis, but developed a completely new machine called the Ranger PPV, which, in addition to a high level of protection against battlefield threats, including IEDs, also has good off-road maneuverability and, according to the company, has excellent maneuverability in urban areas. 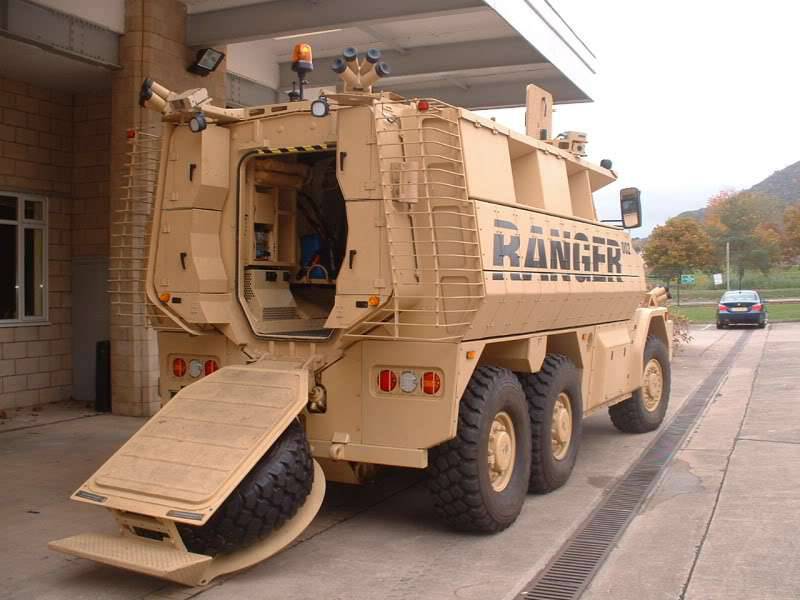 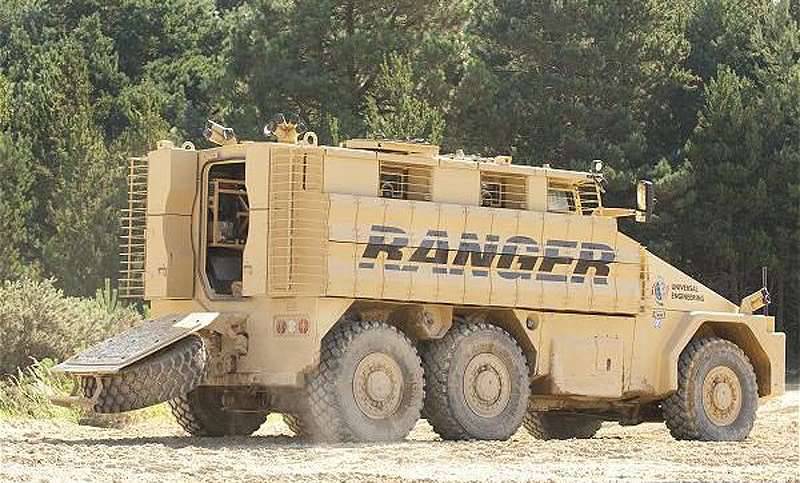 According to the company, in the Ranger PPV armored car there is a balance between a high level of protection and good off-road maneuverability, high speed, large internal volume and payload. This allows in the future with the development of technology to carry out the necessary modernization of the machine.

In 2008, Universal Engineering began the development of Ranger PPV; The first copy was made in the middle of 2009, after which it was first shown to the public.

In the middle of 2010, the Universal Engineering Company manufactured two Ranger PPV pre-production machines. By the beginning of 2013, Ranger PPV prototypes drove over 11000 km along roads and off-road at the British sites in Millbrook and Bovington.

The results of these tests and numerous customer reviews were taken into account in the development program, after which in the middle of 2010, two Ranger PPV pre-production machines were made, one in the 6xXNNXX configuration and the second in the 6x8 configuration.

The first one is about 200 mm longer than the first Ranger prototype by increasing the distance between the first and second wheels. In addition, a slightly raised roof allowed an increase in the internal volume; these cars also have slightly sloping sides to increase ballistic protection.

A ranger in the 8x8 version has a total length of 8,8, a larger volume and payload capacity and, therefore, is able to perform a wider range of combat missions. The base model 6x6 Ranger PPV has a rated load capacity of 6000 kg, while the model 8х8 has a load capacity of up to 11000 kg.

Both new cars have a diesel power unit and are equipped with an electronic architecture from Selex in order to simplify and speed up future upgrades.

On the Ranger machine, you can install various combat modules ranging from machine guns to 25-mm cannons and 40-mm automatic grenade launchers.

The Ranger 8x8 armored vehicle is equipped with a remote-controlled Selex Enforcer combat module (DBMS), which was delivered in large quantities to the British army.
The highly resilient armored capsule underwent extensive ballistic tests in Israel, which confirmed that the level of protection of the Ranger PPV exceeds the original requirements for the project.

According to Universal Engineering, they complied with the STANAG 4569 standard and consisted in detonating a few minutes, ranging from the 4 Level with a sequential increase to a Level twice the maximum STANAG level.

The current version of the Ranger PPV has the full mass of 20 tons, it is equipped with a MAN diesel engine with a power of 540 hp, coupled with a semi-automatic ZF transmission. The Ranger's modular power unit is currently protected by the 1 STANAG 4569 Level, but it is also possible to increase the level of protection.

The Ranger PPV armored car has a durable V-shaped body of armored steel, equipped with anti-splinter podboi and a "floating" floor, under which the bottom armor plate is installed.

The habitable compartment's armored capsule underwent extensive tests that confirmed that its levels of protection exceeded the original design requirements.

As for protection against armor piercing ammunition, it is currently above the 4 Level, which guarantees protection against threats above 14,5-mm B32 armor-piercing incendiary bullets. When installing dynamic protection modules, the armored car withstands hits of grenades fired from RPG-7-type grenade launchers and the detonation of improvised directional land mines.

Armored Ranger is “ready” for the integration of active protection complexes or optical-electronic countermeasure complexes. They provide protection against more advanced threats, such as anti-tank guided missiles.

Four main modular subsystems are bolted to the armored capsule, including a diesel power unit, a middle axle, a transmission and a rear axle.

In order to provide all-situation situational awareness, there are windows with bullet-proof glasses on the machine. If necessary, a camera system can be installed to obtain visibility at all 360 degrees.

Marines sit in the aft troop compartment facing each other; crew survivability increases further due to energy-absorbing seats with a full set of seat belts. These seats can be quickly removed from the machine and used as a stretcher.

Communication equipment and electronic silencers of IEDs are installed along the sides of the machine in the rear part. In most cases, this equipment is supplied under government contracts. The landing party in Ranger PPV carries out the landing and disembarkation through a large hydraulic ramp with a hydraulic actuator on which the spare wheel is mounted. Standardly in the Ranger PPV car the central air-conditioning system Duplex is installed.

Also over the places of the commander and the driver there are hatches for leaving the car. On the roof of the troop compartment are additional, opening to the left and to the right of the hatches that can be used by paratroopers, standing firing at the suppression.

The armament of the Ranger PPV depends on the customer’s requirements, but there is space on the roof behind the driver’s and commander’s places to install a secured combat module.

The first instance of the Ranger PPV was fitted with a MAN diesel engine with an HP 540 power. EURO 5 standard, coupled with an automatic 12-speed ZF transmission, resulting in high power density 28,4 hp / t and acceleration from 0 to 50 km / h in 7 seconds.

The independent suspension with double wishbones and hydraulic shock absorbers from Horstman Defense Systems can be adjusted depending on road conditions. This suspension provides a high level of off-road terrain, as well as increased comfort for the crew and landing force.

Ground clearance can be adjusted, for example, 150 mm minimum, 330 mm on the highway, 505 mm off-road. Without preparation, the depth of the ford is 1,45 meters, with the preparation of the 1,5 meter. In third gear, a car can overcome a slope with a maximum elevation angle of 100 percent (45 °).

As standard, the machine is equipped with Michelin 395 / 85R20 XZL TL wheels with anti-wear inserts. Optionally, a centralized wheel inflation system is installed, allowing the driver to also adjust tire pressure depending on the terrain. This system is particularly used in the desert or marshland.

The steering of the front and rear wheels has a hydraulic boost that allows you to get the turning radius of 8 meters, which is important in built-up areas.

Warn winch is installed in front with a tonnage of 16,1, it is used for self-pulling or evacuation of damaged or broken machines.

The auxiliary power unit (APU) is installed as standard and it allows you to power all subsystems of the Ranger PPV armored car, such as the air conditioning unit and communications equipment, when the main engine is muffled.

The first machine Ranger PPV is made in the configuration of the BTR, but its design is such that it can adapt to a wide range of more specialized roles and tasks.

These include the sanitary version, the command post, the engineering compartment, the demining and explosive ordnance disposal vehicle, the special purpose vehicle, the weapon platform and the fire support vehicle with various weapon systems, including cannons and missiles.

For Ranger PPV, four- and six-seater cabins can be designed, behind which a platform for cargo or weapon systems is installed. The cargo version 8x8 can accept up to NATO 4 pallets on its platform.

Universal Engineering was also exploring the possibility of developing a more compact 4x4 model and a larger version of the 8x8, which would have a high level of unification, reducing the cost of full service life. 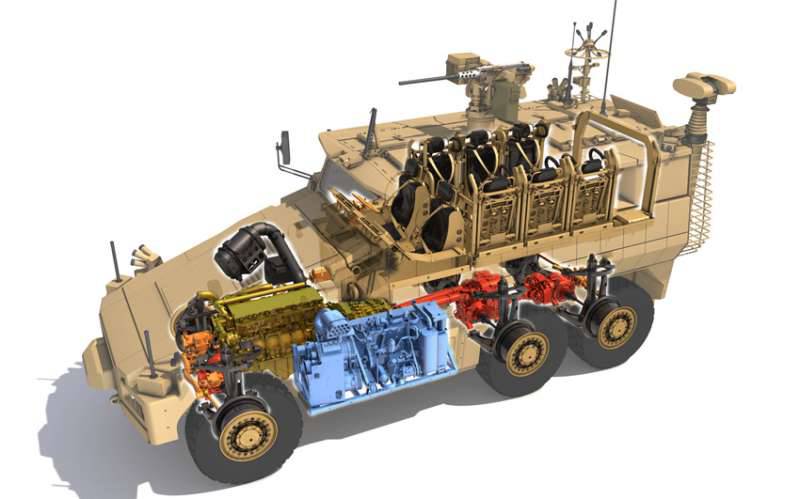 PS It is worth noting that the company Universal Engineering is experiencing very difficult times. The entire 2015 year, the Wales government tried to save the plant of this company (rather, the shop in our understanding) for the production of defense products, allocating millions of pounds for its salvation. In vain. Currently, the production area of ​​the company is waiting for a buyer 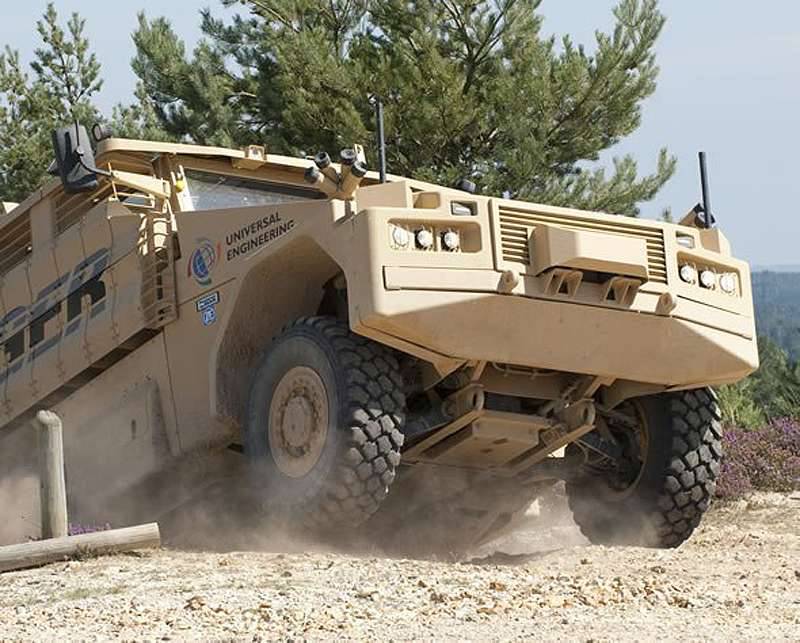 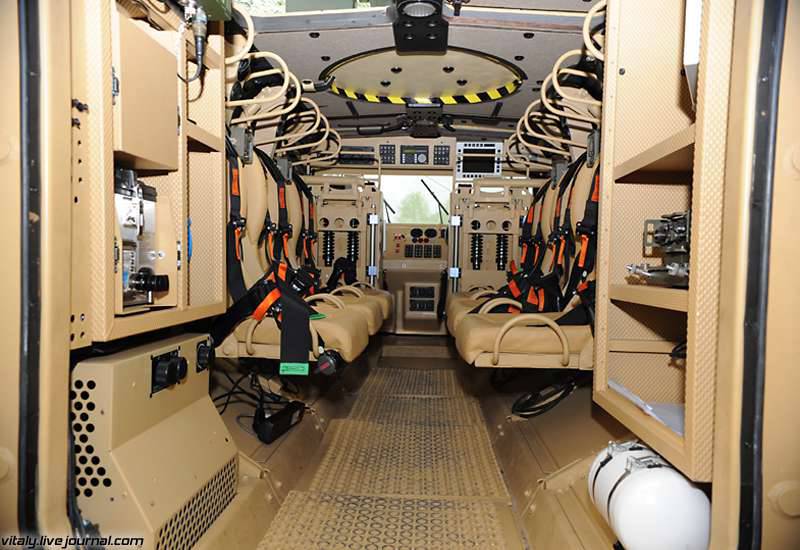 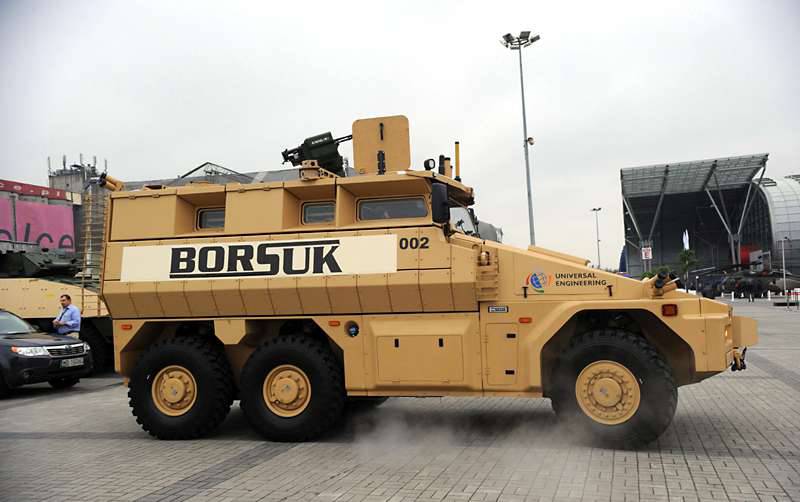 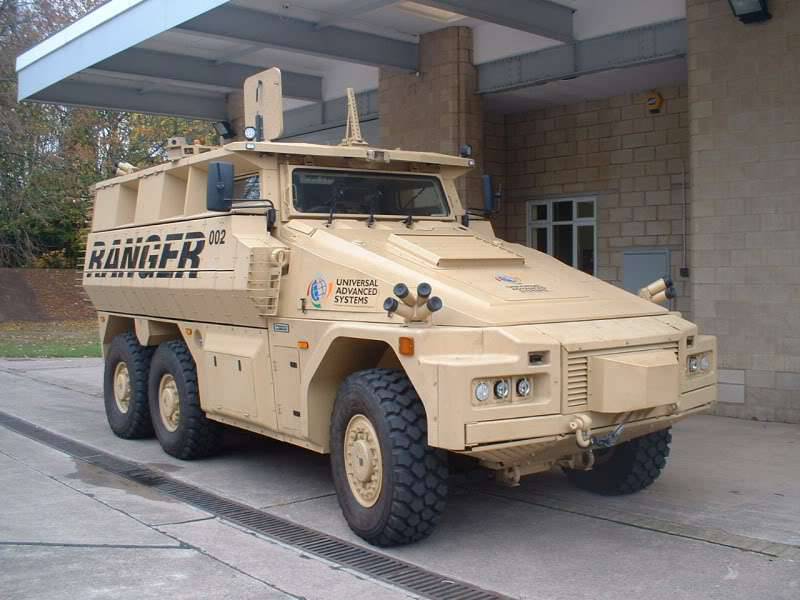 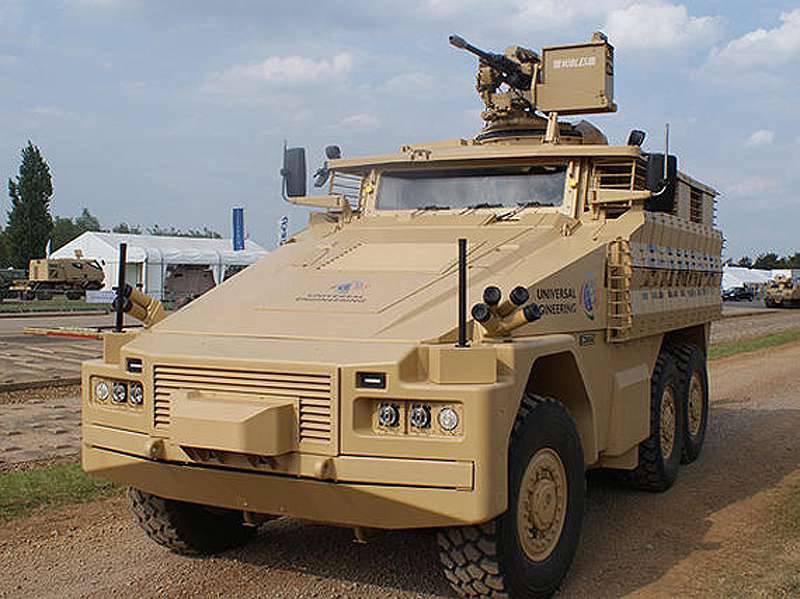 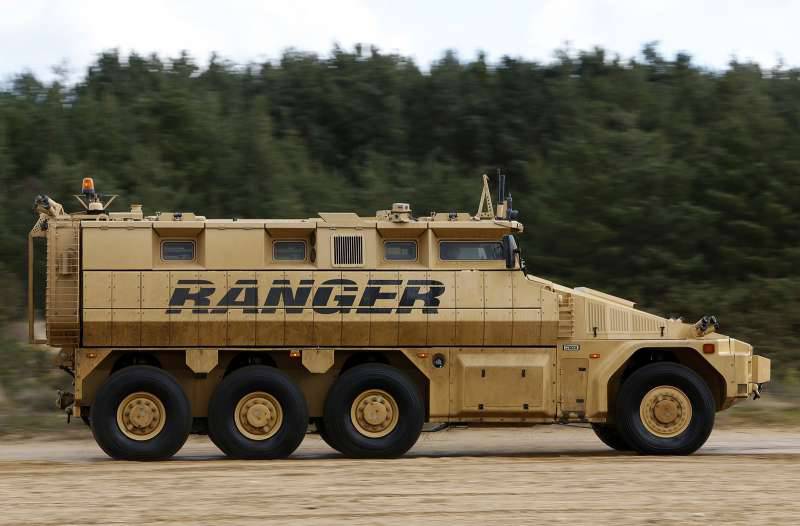