February 8 2016
59
5 February on the official website of the Ministry of Foreign Affairs of Russia appeared a note entitled “Commentary of the Information and Press Department of the Ministry of Foreign Affairs of Russia in connection with the anti-Russian propaganda campaign launched in the Turkish media”. Literally, we will not quote the text, but the general sense is this: Turkey has launched informational training of the population for the introduction of troops into Syria and a direct military conflict with Russia. Although a number of well-known questions arise to the work of our Ministry of Foreign Affairs for some time now, but specifically here diplomats can be trusted completely. Moreover, the Russian military are talking about direct preparations for the invasion on the Turkish side. Statements by Saudi Arabia, the United Arab Emirates and Bahrain that they are ready to take part in the intervention, and completely translate the expected events from the category of “quite possible” into the category of “almost inevitable”. 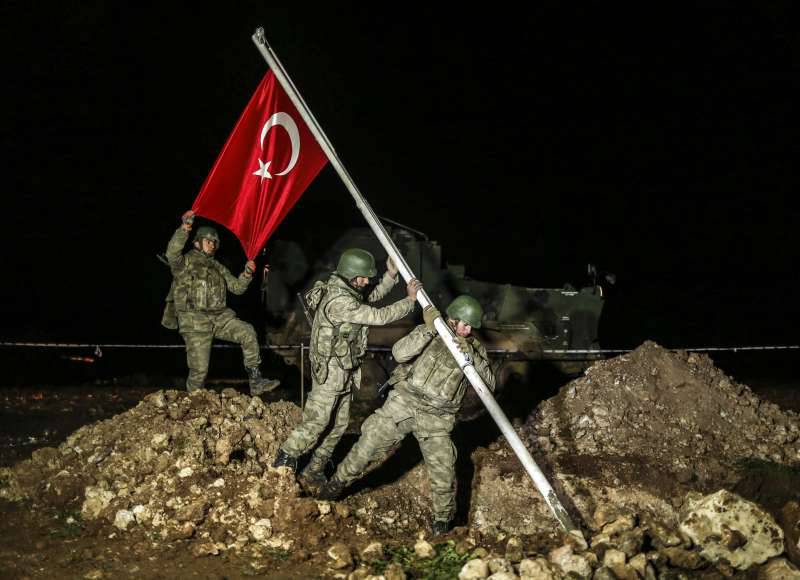 In total News we can say with great certainty that events are moving towards a denouement. In any case, they have already acquired such inertia, which will be extremely difficult to stop. In this sense, it would be worthwhile to recall some important nuances of the upcoming large-scale clash.

Turks for “white people” from NATO are those who are not sorry. In the event of a military conflict with Moscow, Ankara will be regularly supplied weapon all allies are in the Alliance, but Western Europeans hardly want to die en masse, not even for Turkey, but for Turkish ambitions in Syria. Even militant in words, Poland and Lithuania will not risk engaging in such a dangerous adventure. Yes, in the words of Erdogan all support, but thus only drive him into a trap. Poland before 1 September 1939, too, a lot of things promised. By and large, the Turkish president is now providing a great service to the European and American elites. For many years, they were looking for someone who would be so desperate and short-sighted to decide on a war with Russia and be the first to go under attack.

Compare the military capabilities of the Russian Federation and the Republic of Turkey by number tanks, ships and planes are largely meaningless. The armed forces of our southern neighbor cannot be called ultra-innovative, but it is a completely modern army, in which, however, quite a lot of obsolete equipment has accumulated. The critical drawback of Turkey is that its military-industrial complex is not yet able to mass-produce the entire spectrum of what is needed for the army and fleet, and even in the right amount and acceptable quality. Therefore, the country is extremely dependent on external supplies. Nevertheless, the Turks have the strongest ground forces in NATO after the US Army.

Now many are wondering: “What will happen to our military in Latakia and Tartus if Turkey enters the war?” It is known from open sources that Russia has a Su-4С fighter on the 35 base, the same number of Su-30СМ and Su-27СМ , as well as an unknown number of C-400 and Pantsir complexes, plus the Varyag cruiser air defense. For force confrontation with the Turks, this is clearly not enough, even if we add here the remnants of the Syrian air defense. However, the military issue in this case is rather secondary, since the main geopolitical benefit for the United States, which is skillfully conducted by the conflict, is not at all the defeat of the Assad troops or Russian bases in Syria. These are only intermediate, tactical points. The goal is to lock the Black Sea Straits, the Bosphorus and the Dardanelles for Russia. To lock up not only and so much for military navigation, as for the Russian sea trade. And this will be a very serious blow to us, as oil, grain and many other goods are exported in this way. In fact, the Americans will use the hands of the Turks to repeat their famous “Anaconda” plan, which the Union used against the Confederation during the Civil War of 1861-1865. The essence of the plan is the gradual economic suffocation of the enemy, by blocking his trade, first of all - the sea, with the outside world. In general, the Anaconda plan against the Russian Federation was used earlier, because long before the Crimea the largest country of Eurasia was pushed back from trade routes and markets in various ways. Different methods were used for this: color revolutions, admission of the Baltic states to NATO, the EU Third Energy Package and anti-dumping duties on Russian goods. Now times come harsh, and with them the corresponding methods.

It makes no sense to talk about the consequences for our economy, which is already in a difficult situation, will be caused by blocking the straits. Of course, back in the Soviet Union there were plans for the unblocking of the straits, but the Soviet military capabilities were fundamentally different, and the distance from the Bulgarian border to Istanbul cannot be called large. What plans the General Staff and top political leadership of the Russian Federation have today, it remains only to guess.

Inside the Black Sea there is practically no one to trade with. Turkey is hostile, Georgia and Ukraine are the same, Bulgaria and Romania are members of NATO. Who is left? Abkhazia ... By the way, within the framework of the same “Anaconda-2”, hysteria is being inflated in the Baltic: around the Baltic republics and still neutral Sweden. The goal is obvious: to cut off Russia's access to the ocean and through the Baltic ports, although it will be an order of magnitude more difficult to do than in the Black Sea.

The start of direct hostilities between Russia and Turkey is guaranteed to allow the latter to close the straits. To this end, Ankara, according to the scheme already worked out on the incident with the Su-24, will probably want to arrange a new provocation against the Russian military, and then blame them. The Russian leadership will either endure insult, or respond in earnest to the complete destruction of the enemy and the intimidation of all other opponents.

Another special blow will be tried by the Turkish special services, which will do everything to provoke unrest not only in the Muslim regions of Russia, but also in the Russian regions of the Federation. How real is this threat? More than real. For example, we have a lot of talk about Turkey’s active support for militants in the Chechen wars (weapons, ammunition, communications, treatment, financing), but they don’t think much about the earlier stage of the intervention, namely, the participation of Ankara in the collapse of the USSR. Thus, during the riots of the end of 1989 - the beginning of 1990, all border facilities were destroyed in the Nakhichevan Autonomous Soviet Socialist Republic, as a result of which not only the border with Iran but also a small section with Turkey was completely exposed. It was the Turkish territory that the extremists penetrated, returning from there with weapons and money. The result was not long in coming: already on January 19 1990 of the year Nakhichevan, the first among the allied and autonomous republics, declared independence from the USSR.

We emphasize once again: that was the beginning of the 1990 of the year, when the Allied security forces still maintained relative capacity, and society remained relatively closed. What can we say about modern Russia, where the Turkish agents, according to occasional reports in the Russian media, have created a whole network of pan-Turkic organizations for 25 for years? Not to mention the fact that some Turks have a completely European appearance, which means that they are capable of acting within ethnically Russian communities.

So, the plan of the opposite side is clear. Word for Moscow. From the military and diplomats will need a unique skill to somehow chop off the new "Anaconda" head before she really tries to break our neck. Opportunities for this they have. In the end, Turkey is also quite a vulnerable country.

Ctrl Enter
Noticed oshЫbku Highlight text and press. Ctrl + Enter
We are
Prospects for intervention in Syria. Turks and Saudis are preparing for war or bluffing?Iran in the Syrian conflict. The confrontation with Saudi Arabia and the interests of the Shiites
59 comments
Information
Dear reader, to leave comments on the publication, you must to register.