February 8 2016
188
Constantly read in the world media articles in which well-known Western journalists and analysts argue about the preventive strike of the United States and the West on Russia with subtext: stand, or maybe not stand, and it's time? How about some self-evident opportunity. After all, Russia, the Western media are shouting, is so “aggressive,” so the West seems to have the right to do so. 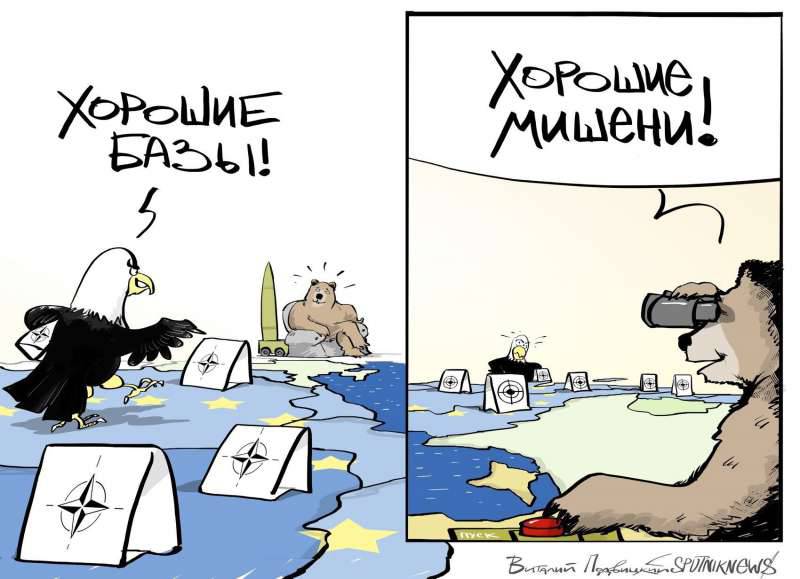 Italian Il Giornale writes about the Kaliningrad region of the Russian Federation: “Being isolated from Russia, not counting sea routes, Kaliningrad was always regarded as a weak link in the new Russian strategy, but it was sufficiently strengthened to inflict maximum damage in the case of a preemptive strike from NATO". According to the American General Frank Gorenko, "this is an extremely dangerous situation."

Italian journalists and American generals concluded that a preemptive strike on Kaliningrad would not bring the desired results, too well protected, unfortunately? The recent meeting of Nuland-Surkov in the same Kaliningrad was deciphered by the Western media as a warning from Nuland about the NATO “imminent attack” on Russia.

Recently, the BBC again distinguished itself: it took off like a “documentary”, using video clips of the war in the Donbas, the film “Third World War: at the command post”. This, so to speak, is a warning film, with the reasoning of well-known British ex-politicians, about how Russia’s “aggression” against Latvia can (or will be?) Look like atomic weapons against the English warship. And in Sweden, nuclear exercises of the Russian aviation, says the whole NATO Secretary General Stoltenberg, but without evidence ...

Strictly speaking, this is called the preparation of a western man in the street for a sudden "disarming" NATO attack on Russia, and its justification. Especially considering the insults and defamation of the Russian president are already government officials of the United States and Britain.

At the same time, analysts of “aggressive Russia”, like water in their mouths, scored, and are afraid to say a word in their “aggressive manner”. Break this vicious tradition.

On the one hand, we repeat, we see the preparation of not only Western, but also world public opinion for a preventive US nuclear strike against Russia, supposedly “disarming” and therefore almost “humane”. If Russia did not have atomic weapons, then the US atomic attack on Russia-USSR took place long ago, according to the already declassified American plan "Dropshot", or an attack on Russia took place according to the Yugoslav scenario, which many Western high-ranking political analysts openly dream of. The nuclear forces of Russia prevent the Yugoslav-Russian scenario from being realized, but the information aggression of the West has already begun ...

I understand this danger, given the increasing propaganda aggression in the Western media against Russia, which is actually a preparation for a military attack (that’s how Hitler’s Germany acted before its blitzkriegs), maybe Russia should speculate on a preventive humane “disarming” attack on the West, from USA to Europe? Why not, if the West publicly discusses such strategies?

Our Stratfor could say in response that there are no coincidences in the Great Game, and the West’s propaganda attack on Russia is a harbinger of a sudden and treacherous military attack. Russia is trying to warn the West about the consequences, and this is why the military operation of the Russian Aerospace Forces in Syria is being carried out - this is a demonstration of Russia's military capabilities. Togo, for example, what can happen in Ukraine if Russia has to conduct a peacekeeping operation there to disarm the Bandera neo-Nazi formations. In order not to have to use VKS in Ukraine, Russia and conducts significant military exercises in Syria.

By the way, Bandera's spells about the imminent disintegration of Russia, thanks to which Banderia will flourish, say that Bandera propagandists consider the imminent attack of the West on Russia by the affair already decided. After all, Banderia itself is part of the plan for an attack on Russia, a springboard for this. Some American generals in the summer of 2015 bluntly said that American missiles and Bandera bayonets would smash Russia. And the Kiev Hitlers painted on the billboards the entrance of the ukrovermht to Moscow.

What they think is incomprehensible, since in the case of the Great War, Ukraine will become the main field of this war, and what it will turn into is difficult to imagine. While Russia can count on the preservation of its eastern regions and Siberia. However, what about the Galician raguls, when European sages put US bases on their territory.

Therefore, Russia may demand the immediate cessation of propaganda aggression in the Western media, and the disavowal of provocative materials already released, such as the war in the Baltic States from the BBC. And the denazification of the Bandera regime. If this does not happen, Russia can take this information war seriously, as preparation for a sudden military attack on it, that war with the West is inevitable ...

In a situation of propaganda aggression, the "human factor" can be superimposed on a failure in the computer networks of the Russian Defense Ministry, or even some accident, and the West itself can receive the first "disarming" humane blow. Yes, then Russia will compensate for the damage caused, within reasonable limits and from a position of strength. After all, in the end, the West itself is to blame: with its plans for preventive strikes and a propaganda campaign, it provoked a "global humane" blow to Russia, it also began to consider it possible.

At the same time, most likely, there will be no Russian invasion of either the Baltic States or Georgia, or Europe, or America, which are broadcast by Stratfor and the BBC. What for? Who we need to get, we will get it anyway! - President Putin has already answered this question. There is no operational need.

In general, Russia today has nothing to lose. Russia-USSR surrendered to the West the Warsaw Pact, surrendered their union republics, so what? We were left alone? The vagrancy before the West of our liberal column indicates what kind of "civilized" West Russia will be. In the humane opinion of our liberals, Russia must endure and defend itself, but in such a way as not to harm the West and the progress of its similar values. And why do we need such values ​​and liberal lackeyess?

For some reason, our liberal column is confident that the military and economic power of the United States is forever, that it is a kind of constant, not subject to the influence of time, crises and catastrophes. And we will see, we will not hurry. We will preserve the sovereignty of Russia, and there, you see, the United States will collapse like the USSR. Freedom to the enslaved peoples of America and Europe!

The task of our liberals is to generate pro-Western decadent sentiments in Russia, and to justify the need for Russia to retreat before the West, to surrender positions further and further. Stanislav Belkovsky, who talked about Putin's riches on the BBC, on the air of Ekho Moskvy, said honestly that it is not usually his characteristic: “Russia needs the West to give it to him.” And we answer him: the West needs Russia to calibrate it. And our liberal column also needs it very much ...

Ctrl Enter
Noticed oshЫbku Highlight text and press. Ctrl + Enter
We are
Right to strikeResults of the week. "This is not for you ..."
188 comments
Information
Dear reader, to leave comments on the publication, you must to register.