Reconstruction of the warriors of ancient Greece and Rome: large and small

February 15 2016
29
It is very good that people are curious. Curiosity, coupled with laziness, counterbalance each other, contribute to the development of civilization, and also makes it work. After all, how else would you learn something without difficulty? Any knowledge, even the most trivial, is work! Well, as for the weapons of warriors of ancient Greece and Rome, there is almost everything to our complete satisfaction: archaeological finds, drawings on ceramic vases (and not only vases, of course), bas-reliefs, sculptures, and finally descriptions of contemporaries. This allows you to quite clearly imagine how everything was arranged with them. For example, archaeologists find a profiled patterned bronze strip. What is it? And we looked at the drawing on the amphora, “attached” to it - it turns out to be a bracket to hold the shield. And so literally in everything! Painted Roman shields and horse armor from scales were found, muscular cuirass and one (!) Iron breastplate, similar to a flax shell, were found - that was what was at that time, well, not to break through! 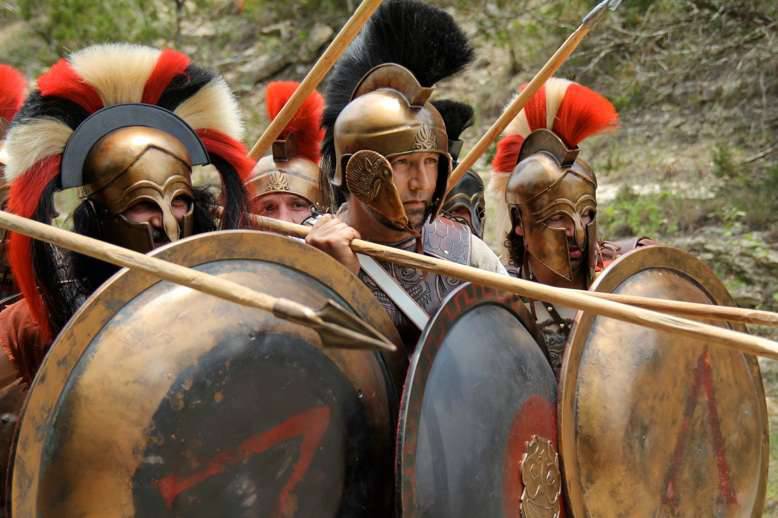 Spartan hoplites in Matt Poitras armor. The letter L is visible on the billboards - “Lacedaemon”, the official name of Sparta.

And it is clear that this gave rise to the desire to recreate all this "in metal" today. In England, where their Roman traditions are piously honored, there is an organization called Ermine Street Guard - Ermine Street Guard. Its members are people of all ages and professions: doctors, lawyers, well, in short, whoever is not there. However, there is no “poor” there, since the armor of the Roman legionary, in which you dress there, costs about three thousand pounds sterling! There are cheaper, but you can be treated like “slaves”, “massage therapists”, which is not very interesting. They have a reconstructed fortress, where they come together for the weekend, they serve there, take pictures with tourists, act in films. Now there are a lot of such clubs and there’s just no one in them, but the “Ermine Guard” is one of the most professional ones. 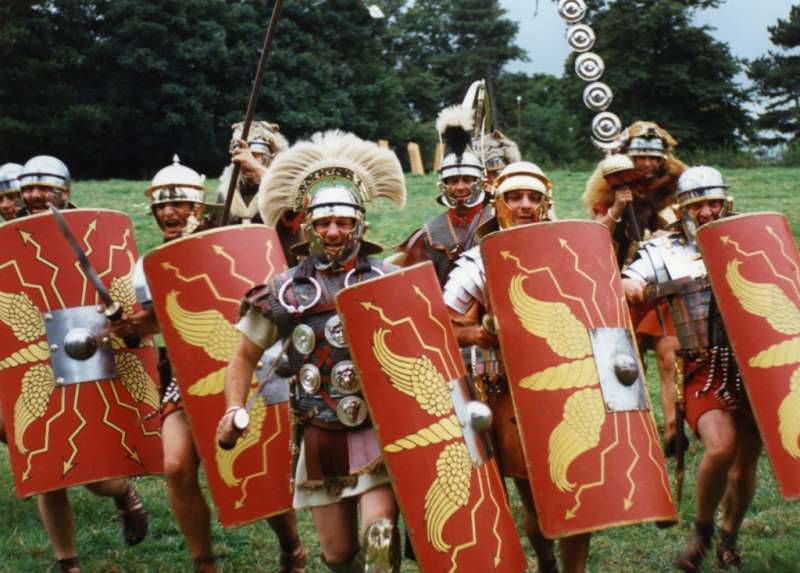 It was created back in the 1972 year and since then has not ceased to exist. All the details of the equipment are recreated according to real finds, and the work of making replicas was supervised by such a famous British historian like Russell Robinson. The armor of legionaries, standard-bearers of signifiers and imagiers, Syrian archers, auxiliaries and even cavalry were reconstructed, well, in a word, the entire Roman imperial legion of the conquest of Britain. By the way, becoming a member of the “Ermine Guard” is very simple: you pay 30 pounds per year and become their full member, that is, you can come to them, be in their fortresses, try on armors and learn to fight with swords and throw pilum. Associate membership is very cheap - 7 pounds. In this case, you will receive an interesting ESG newsletter. By the way, we have our own “legionaries” in St. Petersburg, but this topic is beyond the scope of this story. 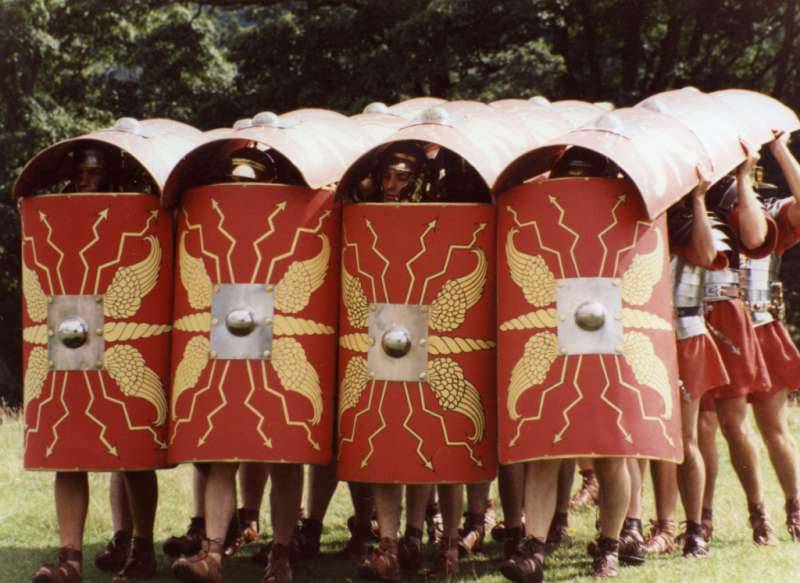 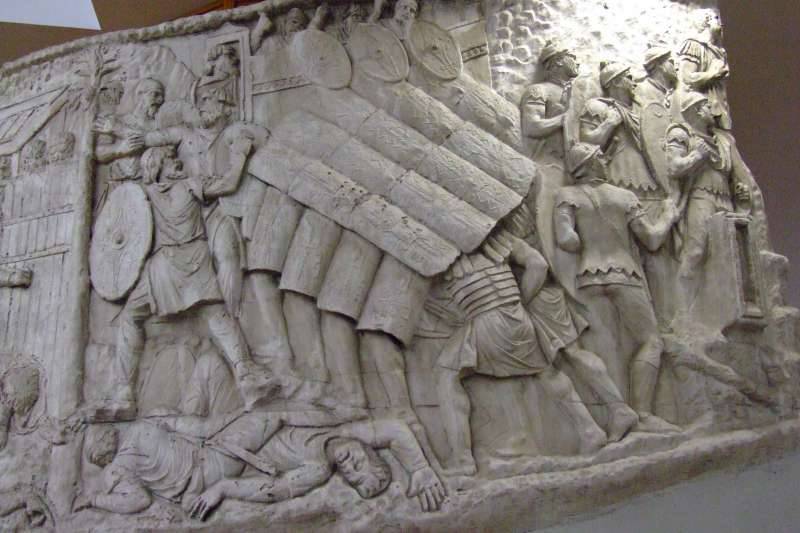 But this "turtle" from the column of Trajan and it is obvious that the sculptor has depicted the shields of the legionnaires disproportionately small, and the chain mail for some reason too short, so that they do not protect anything from the bottom!

There is a whole “brigade” of craftsmen who make it all up to them. Among them was one of the most famous British re-enactors - Michael Simkins. He is given a “green helmet” in the museum, and they get exactly the same, brand new and brilliant. Wrote a wonderful book: “Warriors of Rome: An Illustrated Military History of the Roman Legions” - “Warriors of Rome. Illustrated military история Roman legions. Moreover, the drawings for it were made by James Field (a very famous illustrator), but Michael himself completed the reconstruction of helmets, armor and weapons, and you can see that you have found a graphical drawing of what you found, then how it should look in metal, and, finally, how it all looked together in public! Despite the fact that the book was published in 1988 year, it is still on sale, but is expensive (about 50 $). 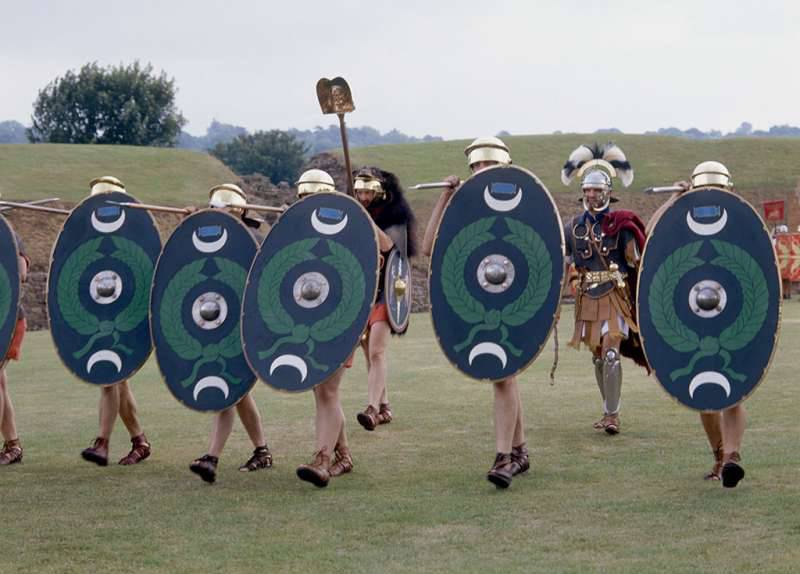 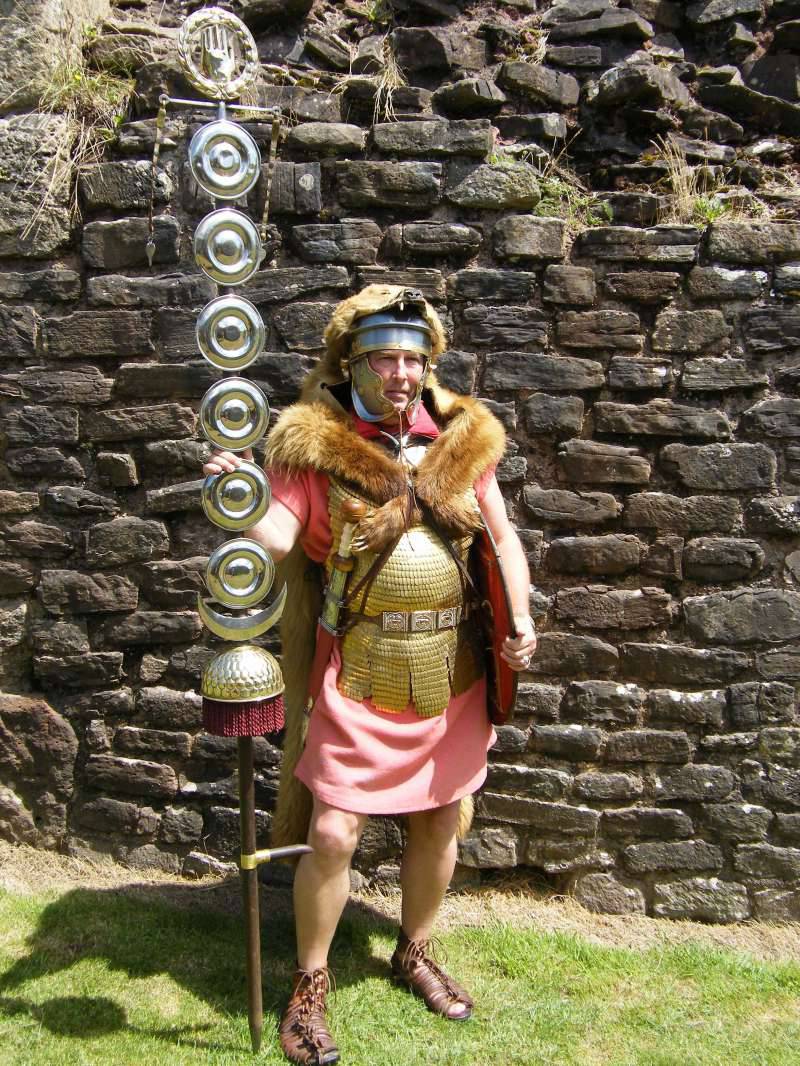 A real Signifier in a scaly shell and a bear skin!

Interestingly, the reenactors of the Greek and Roman armor also appeared across the ocean, in the same USA. And they make no less interesting armor and helmets than their UK counterparts. Among the re-enactors there should be mentioned first of all Matt Poitras from Austin, Texas. Here his works have already been described in the materials about the Trojan War. However, Matt is not limited to this topic. He made several sets of armor of ancient Greek warriors - the Spartan king Leonid and Alexander the Great himself, and used the famous mosaic from the National Archaeological Museum in Naples as a model. That's the source, so the source, is not it? This armor of Alexander was subsequently reconstructed for the Oliver Stone film “Alexander” and this, of course, is the most correct way that the director of a historical motion picture can and should go. 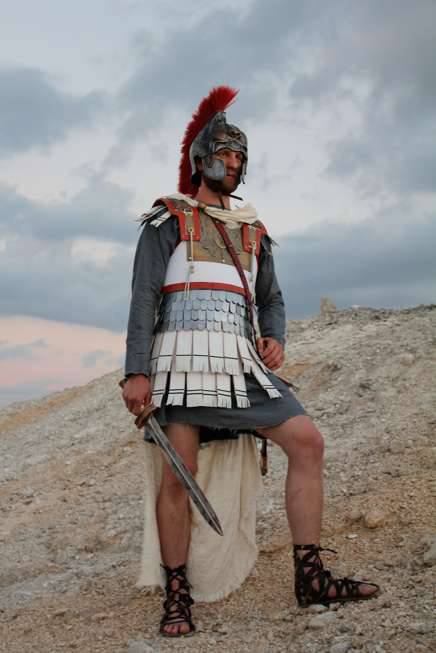 Alexander of Macedon in the armor of Matt Poitras. 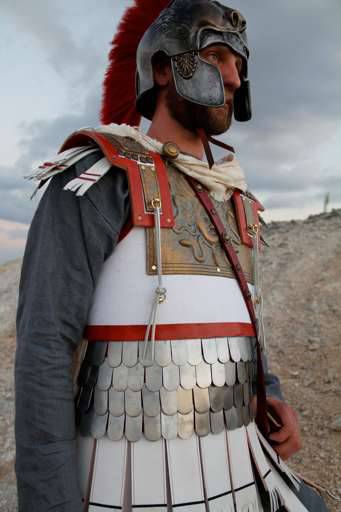 Alexander's armor is made of many layers of glued fabric and metal scales. 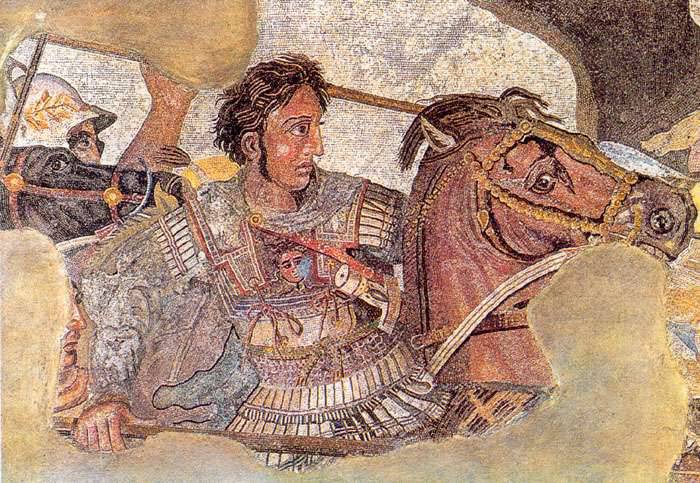 Mosaic from the National Archaeological Museum in Naples with the image of Alexander the Great.

As for Tsar Leonid, Matt chose a very original pattern with horse knives for his helmet, but this is by no means a master's fantasy. This helmet is known! He also made two armor - the armor of Leonid and the second for his associate. 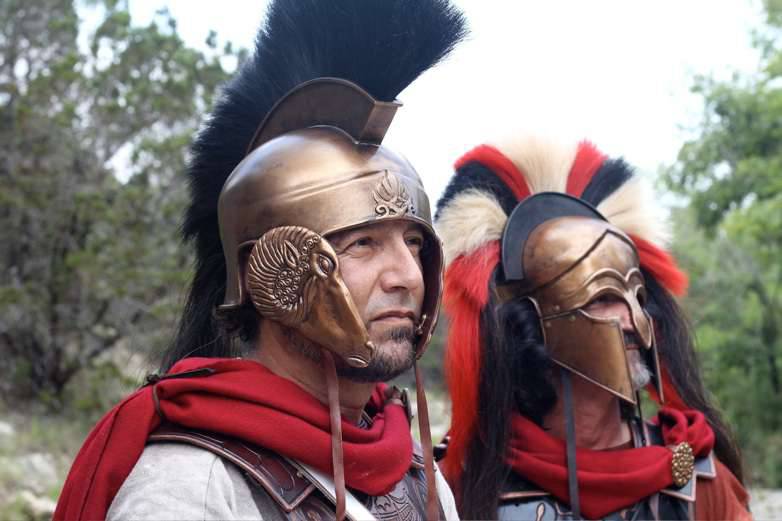 Both shells adorn the heads of mythical monsters. In general, I personally did not have to see "anatomical shells" with such ... ornaments. But ... they could well be on them, why not, and who knows, maybe such cuirasses just did not reach us. Suppose they found their early Christians, well, and as the symbols of paganism, the first thing they did was to melt down! 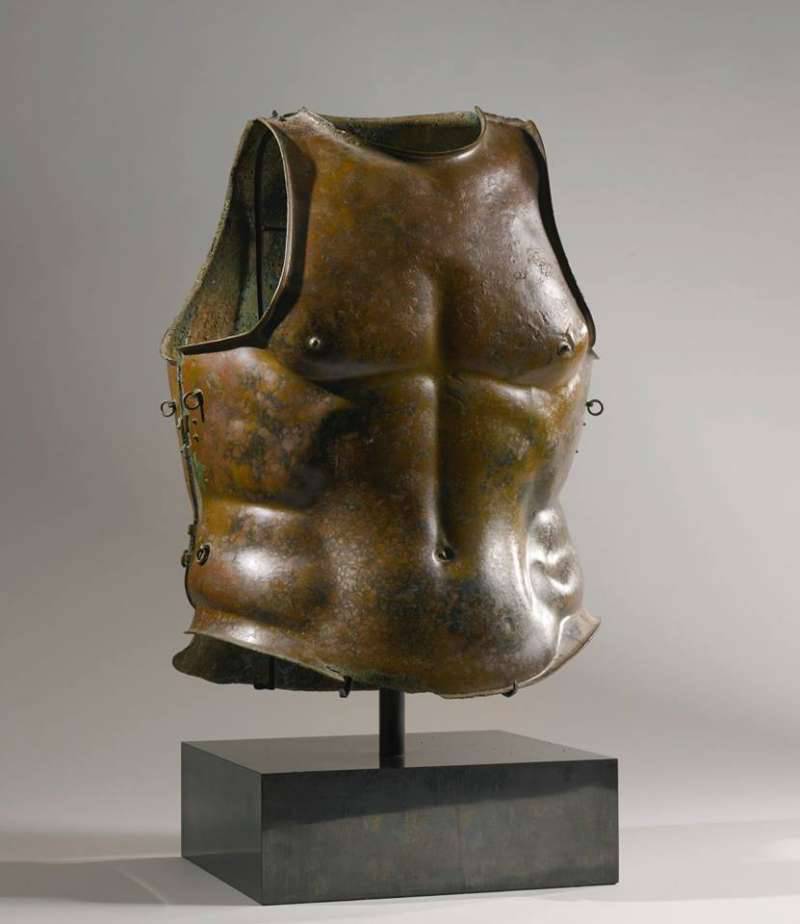 It must be said that Matt Poitras constantly emphasizes in his promotional materials that only the armor does - their reconstruction of his element, but for someone else’s weapon, go to someone else! But the main thing is that today it is no longer a problem either for filmmakers or for fans of historical reconstruction to get any armor for themselves, there would be only money. 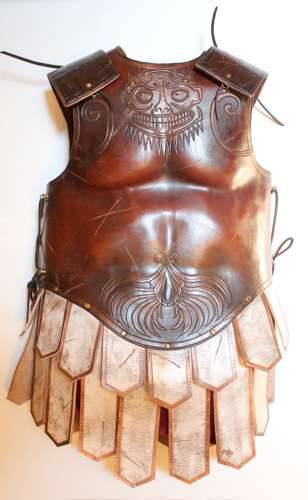 The breastplate of Tsar Leonid, the work of Matt Poitras bears even traces of “combat” damage! 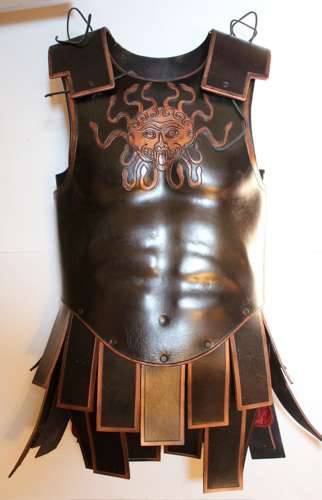 Armor with the image of Medusa Gorgon by Matt Poitras.

In addition, it is not necessary to go somewhere overseas. A few years ago, in Anapa, near the local history museum, I came across an amusing reconstructor (funny, because he had a whole arsenal of ancient weapons and armor for all tastes!), Which made pretty good armor, including muscular cuirass. Well, their weight was appropriate, which I did not fail to make sure then. So we also have masters and, while improving over the years, they may well reach and surpass the foreign level. There would be a desire, time and money! 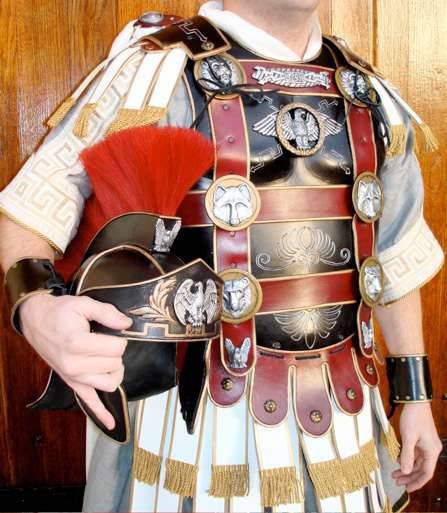 Well, for those who can not afford “growth armor” today, they can withdraw their souls by collecting and painting polystyrene figures on the 1 scale: 16 of the Ukrainian company MiniArt. The company produces excellent prefabricated models and figures in scale 1: 35. Being painted with acrylic paints, these figures make a very strong impression. 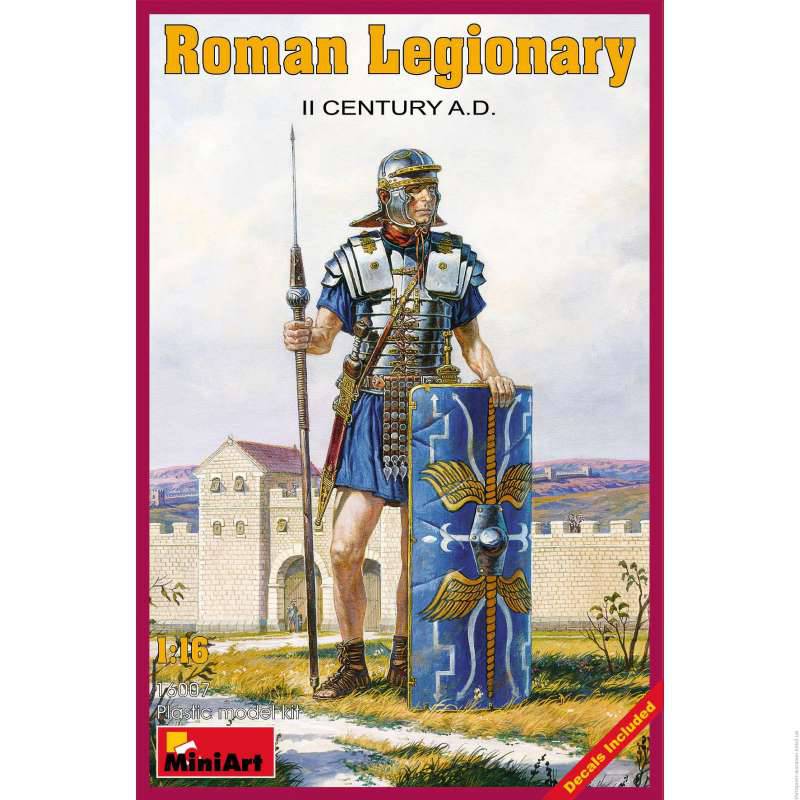 Well, large figures on the scale of 1: 16 are good because they are very carefully worked out and historically reliably detailed, packed in a colorful box, equipped with instructions and high-quality “decal” (decal). This makes it quite easy to create very realistic sculptures with drawings on the same shields that you simply cannot make up by hand. 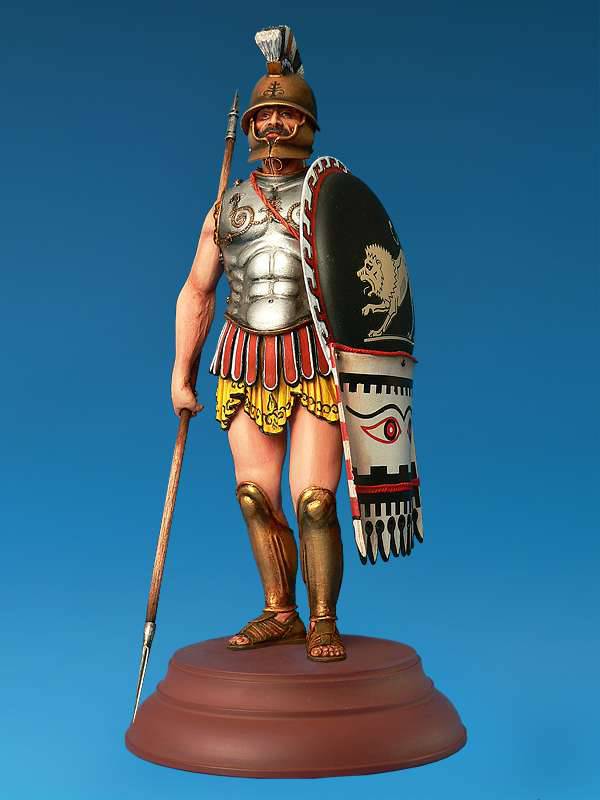 Figurine from the set of the company "Miniart": Athenian hoplite. 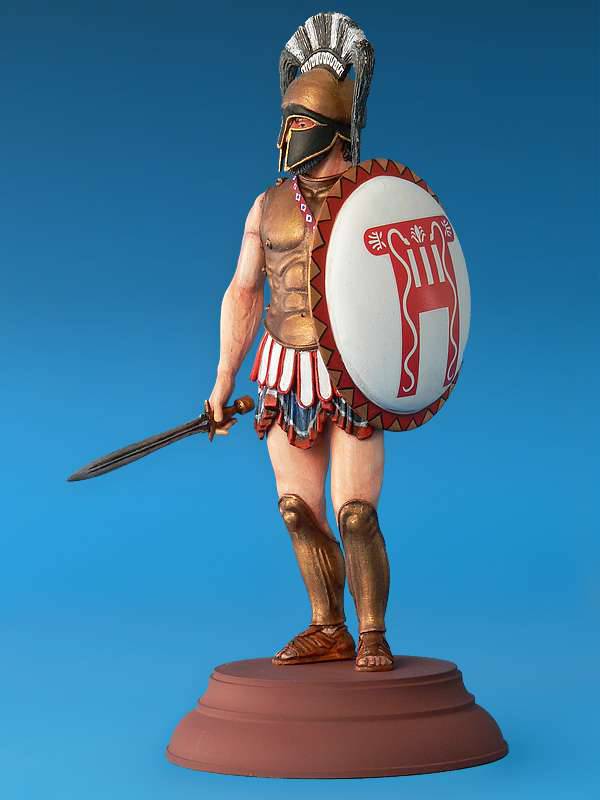 Moreover, for the figures of the Spartan warrior, there are even two options for the design of the shield. One is presented in a photo courtesy of the Miniart company, and the other with the traditional letter L. By adding various homemade parts to them, you can redo them (in the language of modellers, convert) to soldiers of other eras, say the same Roman legionaries, turn into auxiliaries, for which it is necessary to equip them with oval shields. It is not difficult to make, on their basis, your own figures and cast them from epoxy resin in viksint forms. 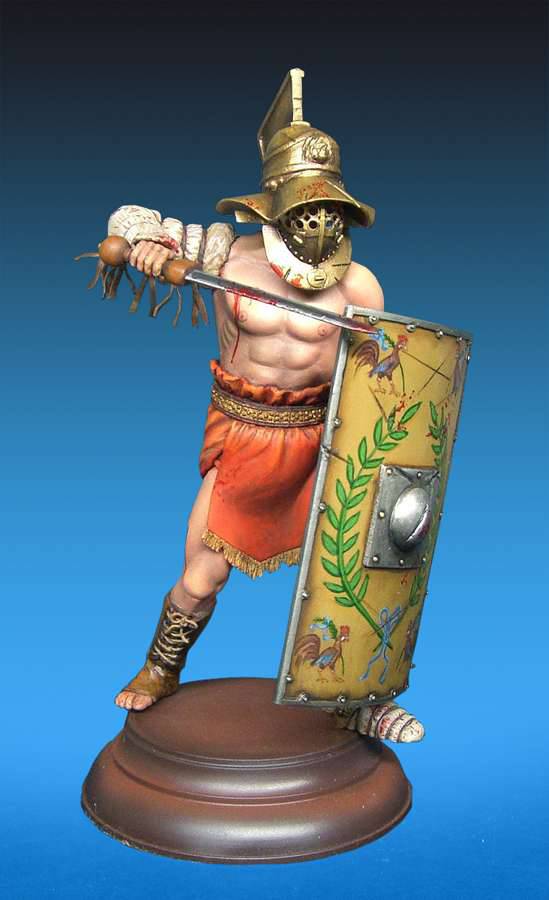 The figure of the gladiator-samnita is still only preparing for mass release. And we must think that a Thrakian will be made to her as a couple. Well, skillful "conversionists" can easily make this guy gladiator ... gladiator ... woman! It is known that these were also known, their tombstones and even their names are known, so you, in turn, will be able to make good money on these conversions!

As for the images on the boxes themselves, they are drawn by the well-known artist Igor Dzys, who is well known from us in drawings in a number of publications. 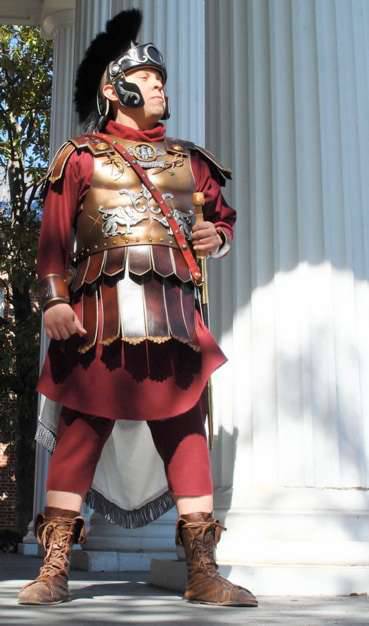 Roman rostrum of the empire. Reconstruction of Matt Poitras.

Unfortunately, Matt Poitras did not dare to make a replica of this armor - the iron armor of the so-called Tomb of Philip. This is a very interesting sample of the cuirass, not from bronze, but from iron. In the museum where he is on display, such a person as Matt, of course, will not be denied and this will be a really significant contribution to the modern “applied history”! 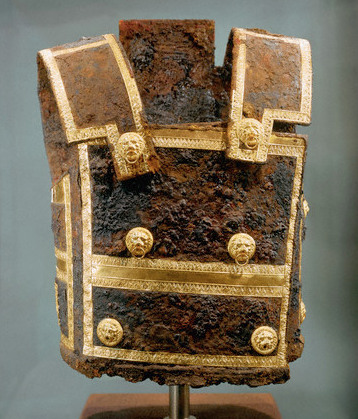 The author is grateful to the company “Miniart” (http://www.miniart-models.com/menu_r.htm) for the photos provided.

Ctrl Enter
Noticed oshЫbku Highlight text and press. Ctrl + Enter
We are
Once again on the issue of reconstructing the weapons of the era of the Trojan War. Warriors in armor and helmets (part 12)Father told
29 comments
Information
Dear reader, to leave comments on the publication, you must to register.